David Elliott: A Hamilton Casualty Near the End of the First World War

For a young man from a large Hamilton family, the First World War must have represented the chance to see the world. An athlete, he adapted quickly to life as a machine gunner in training in England, and he was sent to the front in the spring of 1917.

On Tuesday 8 February 1916, in the midst of the Great War, David Elliott stepped up to the doors of the recruiting office in Hamilton, Ontario and entered. The twenty-one-year-old clerk, the youngest of eight children, lived on Young Street with his parents William Elliott, a shoemaker from Scotland, and his wife Elizabeth (neé Ackland). As a teenager, David had worked for a time with a local haberdasher named Charles F. Shields and, playing with the Hamilton Alerts rugby-football team, had won the Grey Cup for the year 1912. But Elliott was to leave these youthful achievements in his hometown behind him when he signed up with the 173rd Battalion Highlanders. Joining him in the recruiting office that same Tuesday was a handful of other men from across the city. Several of these men had previous military experience of some kind. Gavin Scott of James Street North had spent three years with the Imperial Yeomanry in the Boer War. On the other hand, John D. Nelligan, of Park Street, at forty-four years old likely the eldest volunteer on that day in February, had only a few summer camps with the 77th Regiment to his credit. Others had already received training in Hamilton with the 91st Regiment Canadian Highlanders and therefore would have already known each other. Charles S. Clegg of Myrtle Avenue had spent a year with the 91st, and Samuel Smith of Cannon Street East had spent four years. Others, however, had no previous military experience whatsoever, including Clegg’s elder brother John J. Clegg, Clarence Foster of Hughson Street, Arthur Palmer of Market Street, and Archibald W. Erskine of Lamoureux Street, at sixteen years of age perhaps the youngest of that day’s intake. And for Elliott, too, the military life was to be something new. 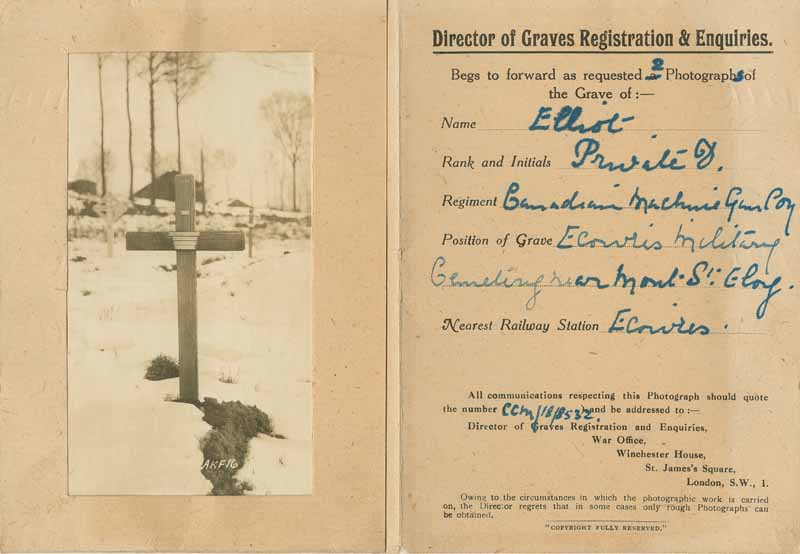 These new acquaintances of the 173rd Battalion spent the summer training, parading and posing in uniform for photographs. They also played baseball games and took part in the 1st Brigade field day, winning the mile relay event. One of their last duties in Canada was to escort the 170th Battalion to the station in October 1916. Then it was their turn in November, as Elliott and his mates departed Hamilton with the 173rd for England. But upon arrival, the battalion was immediately broken up in order to provide sorely needed replacements for existing forces, much to the reluctance of its members. Elliott left his fellow Hamiltonians for the Canadian Machine Gun Depot, then stationed at Crowborough Camp in Sussex. As he told his sister Elsie, at home in Hamilton, it didn’t take him long to learn to handle the heavy Vickers gun. By April 1917, his training was over, and Elliott signed his will in preparation for front line action in France. He arrived as a reinforcement for the 1st Brigade Canadian Machine Gun Company (1st Division), likely to replace a casualty who had fallen during the intense fighting of Vimy Ridge. Throughout the summer and fall of 1917, he fought with his new unit, surviving battles at Lens (Hill 70) in August and Passchendaele in October-November without injury despite heavy casualties. In the first two weeks of November alone, the 1st Division lost 160 machine gunners. 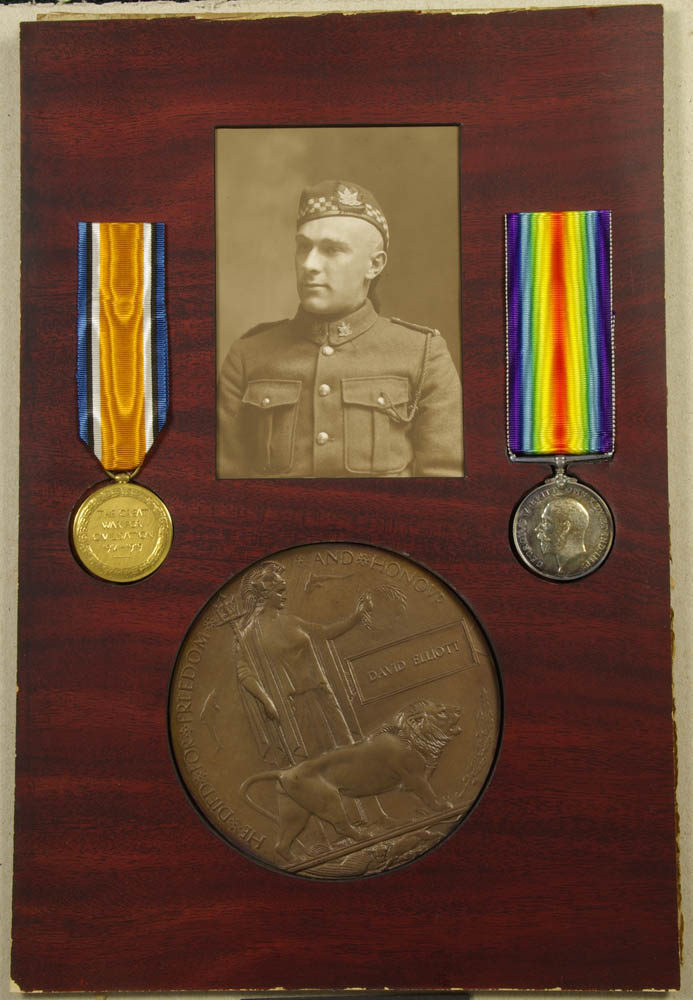 On 27 March 1918, in a rearrangement of the machine gun troops, his company was placed in the 1st Battalion Canadian Machine Gun Corps. No sooner had this change occurred than the German Lys Offensive began on Tuesday 9 April 1918, with a heavy barrage of artillery, and two men of the 1st battalion CMGC were killed in action: Pte. Alexander R. Laing and Pte. David Elliot. The Globe and Mail reported their deaths a few weeks later in the casualty lists. Surprisingly, the war diary of the battalion strangely mentions no deaths, only five men wounded, two in the heavy bombardment which struck at 7:00 am before the German advance and three during a grenade fight in the defence of a gun from a raiding party. Having died an obscure death far from his home city, separated from family and friends, David Elliott was buried at Ecoivres Military Cemetery, Pas de Calais, France. His mother, in a letter informing her of her son’s death, was not told how he had died. Later that summer she received his personal effects: a pocketbook containing private letters and photographs, some cigarettes in a case, a comb and scissors, a pencil, his dog-tags, and a religious medallion.