The airplane, a product of the first years of the twentieth century, was quickly drafted into service following the outbreak of the First World War. Its earliest use was as a spotter for artillery. Newly developed weaponry like the machine gun meant that waves of charging soldiers and “old fashioned” cavalry could be stopped in their tracks. Wars of movement became a thing of the past. Both sides dug defensive networks of trenches and years of siege warfare began. In order for an army to be able to use its artillery pieces without leaving them exposed to return fire, it had to hide them behind visual obstructions like hills and wooded areas. Airplanes could counter this tactic by spotting enemy guns and communicating what they saw to ground forces via Morse code, using another invention of the twentieth century called wireless telegraphy. 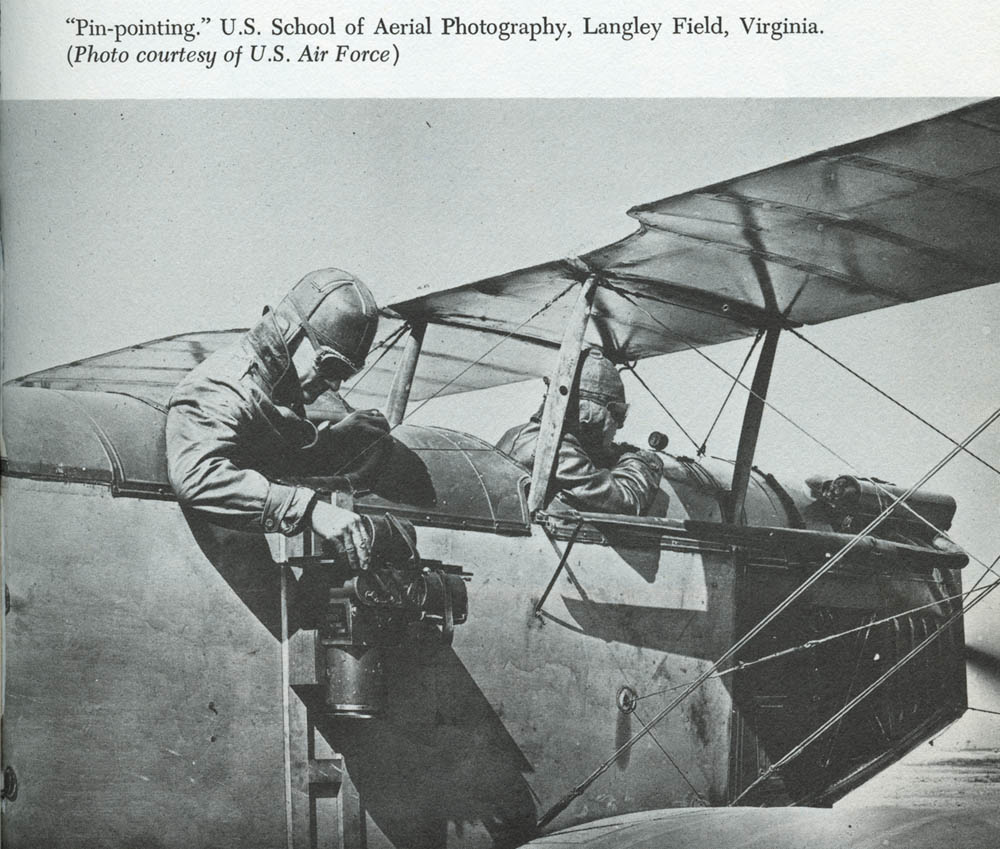 Balloons, the only tool for aerial observation before the twentieth century, permitted a limited view of enemy territory, often from an oblique rather than a vertical angle. “Kite” balloons were too vulnerable to attack to fly directly over the enemy and were usually kept tethered to the ground at a safe distance. During World War I there were trench lines running from the English Channel to Switzerland; if not for the airplane the area behind enemy lines (180 degrees on this two-dimensional plane) would have been hidden from view. The aerial observer could now view the enemy in three dimensions with a 360 degree field of view.

Although the French, Germans and Italians were all ahead of the British in developing air photo reconnaissance units, it was Sergeant A.V. Laws of the Royal Flying Corps who proved just how valuable and detailed aerial photos could be. While taking pictures from the air of a ceremony at the Royal Aircraft Factory in 1914, he happened to photograph a sergeant-major chasing a stray dog off the airfield. Upon examination of the processed photograph, he discovered that he could clearly discern the man’s footprints on the grass. Like Robinson Crusoe’s fictional footprint discovery, this event led to a dramatic realization: even the smallest traces of human activity on the ground could be detected from the air. To this day, the metaphor of a “footprint” is still used to describe our impact on our environment. 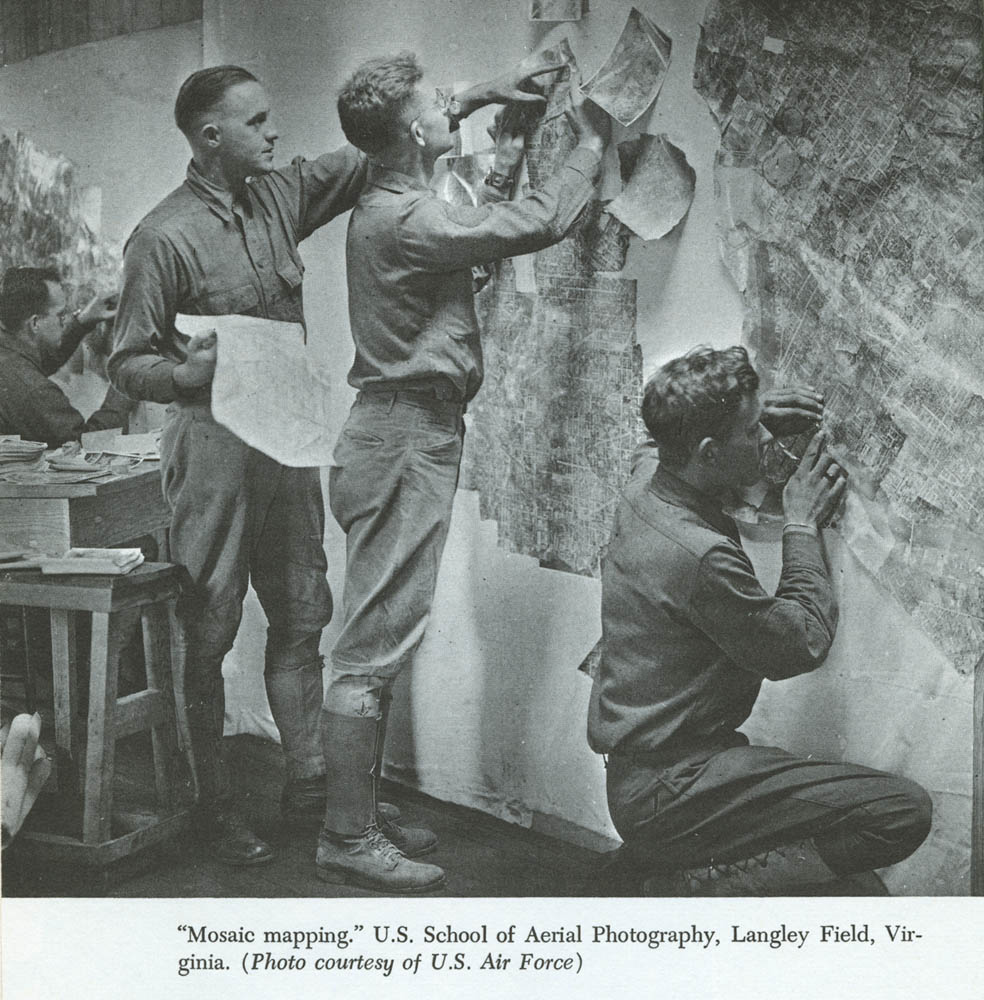 At the beginning of the war, reports from aerial observers were delivered in person or in writing, but this was found to be inadequate as it was impossible for them to accurately report all that they had seen. It was possible, for example, that an observer might neglect to report certain details which he felt to be unimportant. The photographic record, which would give an accurate account of enemy territory and activity, was clearly superior. Aerial photographs allowed experts from various fields to examine the same information and permitted comparisons of the photographed area over a period of time. This latter point became crucial in the detection of enemy build-up before an offensive.

Air photo interpreters soon realized there was truth in the old adage “a picture is worth a thousand words.” Newly felled trees and tracks at the edge of a wood, for example, most likely indicated the placement of a hidden artillery piece. Although weapons might be hidden even from aerial view, the size of tracks or a cast shadow could betray the presence of a gun and even reveal what type it was. The length of shadows could also be used to estimate the size of objects by calculating the angle of the sun based on the date and time of day the photo was taken. Patterns created by the location of certain man-made objects in proximity to each other created “signatures” which could identify their function. For instance, several buildings adjacent to a road or rail network with large, stacked objects evenly spaced surrounded by a fence would probably indicate a supply depot. If the stacks were spaced further apart it was probably an ammunition depot.

The war also saw significant advancements in the areas of cameras and film. The same Sergeant Laws, mentioned above, took the first overlapping aerial photos from a dirigible while in the Royal Engineers before the war. This was a breakthrough since all cameras of the time distorted images towards the edges due to the curvature of the lens. Overlapping photos meant that the accurate, central portions of the images could be pieced together to produce a photo mosaic map. This technology became the basis of our modern method of mapmaking. It required that the photos be taken vertically and it was some time before an adequate camera mount was designed that would not be affected by the plane’s vibration. The first mounts were on the outside of the fuselage beside the observer’s seat but were later replaced by interior mounts through the floor of the plane. The Germans, throughout the war, preferred to take photos at oblique angles and rectified them to vertical with special instruments.

Although a roll film camera was in use as early as 1915, glass plates backed with sensitive emulsion were still used during much of World War I. Since planes travelled much more quickly than dirigibles, in order to be able to take overlapping photos, plates had to be loaded into cameras faster. Magazines were developed which allowed multiple plates to be loaded at once and fed to the camera automatically. Sergeant Laws invented a camera (designated “L”) with a six inch focal length which took detailed 5”x 4” photographs at 6,000 feet. As anti-aircraft capabilities improved, reconnaissance planes had to fly higher to stay out of harm’s way. Sergeant Laws and 2nd-Lieutenant J.T.C. Moore-Brabazon designed a camera (designated “L/B”) which took detailed 7”x 9” photographs at 12,000 feet. Most photographs during World War I were taken at approximately 10,000 feet with an 8 inch focal length, which resulted in a photo covering approximately one square mile. By the last year of the war, all participants except the United States had the capability of taking photographs at 15,000 to 18,000 feet which, when enlarged, could reveal a footprint in the mud.

The McMaster University collection contains almost six hundred examples of WWI aerial photography. The material ranges from oblique photos taken of the Canal du Nord just days prior to the battle, to vertical photos revealing tanks and tank tracks before the battle of Cambrai. Many are of the Meteren, Wytschaete and Ypres regions of Flanders, areas corresponding to trench map sheets numbers 20 and 28 in the years 1917 and 1918.