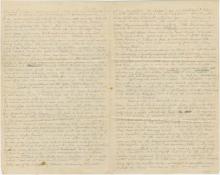 Churchill assumed Germany would take the Salamis, whereas I think it far from certain. Undoubtedly, she will do as we did in the case of the Canada, namely take the ship over at the moment of completion but will delay doing so officially until then. Now I am uncertain of the Salamis' dates but rather think she had hardly been laid down when war broke out; certainly she was not launched, and probably is not yet afloat. That being so, she will not be ready before the war ends, and will escape being taken over. She would be a good ship to them; a copy of the Derflinger, I believe with Bethlehem 14'' guns in place of the latter's Krupp 12''. Both are derived from our Lion. Really when one thinks of it, few countries have had such luck as has fallen to Greece in this matter. She had failed to reply to Turkey's programme, and was faced when the Reshadieh and Osman neared their trials by inevitable loss of the command of the sea and the consequently the loss of her new islands; unless the Powers should intervene, which seemed unlikely. The War saved her from this, and offers her the remaining islands, for the asking.
I can sympathise with your difficulties at the "French speaking evening", especially as I had a similar trial a night or so ago. A few of us from our billet had decided on a hot supper, and I popped into the butcher's to buy 4 lbs of sausages and 5 lbs of potatoes. They had no sausages in stock, and so I was asked into the inner room where the daughter proceeded to make some. She filled a long skin with sausage meat taken from a bowl, with the aid of a funnel and her hands. It took a long time, and all the while they (she and the mother + grandmother) kept up an animated conversation as to the war, mud in the trenches, effect of the war on the village, "had I been to Belgium before?", and anything they could think of. They made coffee and gave me a cup; and finished up by telling me that they noticed how well all the men of my regiment spoke French. I am afraid it was only by contrast with others, however, for I have often been amused by the way regulars trot into a shop and ask for a thing in ordinary English, and get it. The principal shopkeepers of course soon learn the English terms for items of their trade (i.e. Coinage, weights, and names of articles). Once I was in a bakers shop in Bailleul and a regular entered and asked "Have you got any small loaves, miss?" She handed him one of the 7 fivepenny loaves comprising the sole
stock. He replied, "No, haven't you any small ones"? This regularly floored her and even his signs were unsuccessful, so an interpreter had to be called in (me). However it is easy to shop anywhere, the usual trouble here being that they are usually out of everything. The local suasages are not divided up and are solely composed of meat, being devoid of our home seasoning and bread. I prefer the English article but made a good meal off the Belgian. First, however, I had to have a wet towel around the head, and a long rest, before recovering from the stress of buying them.
We have remained at the Canon d'Or all this while. The landlady is greatly improved since the first day or so; principally, I think, because we have come to a modus vivendi. We live (when not out) in a little room at the back and cook certain food there. At night we come into the café portion, to sleep near the stove, as the inner room is cold at nights, being tiled. Whenever we have hot supper, she willingly cooks it for us on the café fire for 2d a head and sometimes has space to boil our breakfast tea. Yesterday she washed me a shirt. The café does a good trade with us in 1d cups of coffee and a much smaller trade in beer. This is all it sells now though I think there would be other things in pence. It is forbidden to sell intoxicants to the troops in Belgium, but I think the prohibition does not extend to France.
Most of the time this billet has been my base have been out of the trenches and have gone into the woods behind for fatigues daily. On the 19th, however, our troops had a night attack on, and my regiment took up a position in support, inside the wood. The attack took place quite early and was fairly successful but with rather heavy loss to the assaulting party. Our guns had bombarded the Germans all day previously, and I believe their loss, all told, was very severe. We heard they had guns smashed. We are always hearing they have guns smashed. For the remainder of the night, all was still and we lay in the dripping woods (it rained) trying to get what sleep we could, but it was precious little in my case. Towards nightfall of the following evening, a large party of the regiment, including myself, went up to the captured position and prepared it for our men's occupation. The actual original German trenches were quite unfit for occupation being up to the neck in water, so we had to use other means. I wish the Kaiser had been in them, it might have