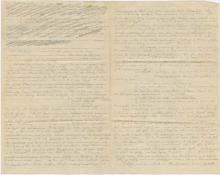 I see the official account of the affair states that:--
2 battlecruisers and 1 armoured cruiser attacked Hartlepool
1 [battlecruiser and] 1 [armoured cruiser attacked] Scarborough
2 [battlecruisers] later attacked Whitby
but elsewhere it states that "a small German war vessel" also opened fire on Scarborough and Whitby. From this I take it that there were engaged 3 battle cruisers, probably excluding the Derflinger (though she may be a fourth) also the Blucher and a light armoured cruiser of Rostock type. This last would be the lesser Scarborough ship. However all is very hazy. It seems remarkable that no one could name such distinctive ships as those concerned. We could learn a lot from the shells. Assuming (as is almost certain) that neither battleships nor any of the remaining Roons were brought,
12" shells prove Derflinger
11" might be any of the other 3 [battles?]
8-2 prove Blucher
6" [prove] nothing
4-1 [prove] Rostocks (etc)
The reason for using battle cruisers is plain enough when one thinks of it. The 2nd Cruiser Squadron employed in the previous Yarmouth raid was too slow and in danger of being caught, while, as for light cruisers, their Rostocks could be run down by our Arethusas. The danger ran by the German squadron was from our submarines. It is a pity we had none handy, though a hit would have been doubtful. On the whole, the circumstances are not unlike those accompanying the Vladivostock squadron's doings, with the important exceptions that its objective was transports, not towns (and so did not fear submarines), and also that barring the Rurik, Iessen's ships were faster than Kamimura's.
I was very pleased about Egypt and like the new title. As to "Pharoah," it would have been out of place without a complete reconstruction of [Khem?] and "Sultan" is historic for Egypt. So far as I hear, the Turkish invasion has fizzled out. Papers talk a lot of a Turkish revolution, but
I am afraid in that case they would keep Stamboul. They seem to be doing badly in [Transilvania] and may divert all troops there. It is rather quaint for Turkey's main object was to get back Egypt. I wish Russia were doing as well on her side in Poland, but news from there is very indeterminate. Of course it means nothing for Russia to retreat, as to do so gives her the advantage of moving army from Germany's railways. You should read Kuropatkin's "Russian Army and the R.J. War" upon this very matter of the Polish railways. Talking of Russia, do you see that the Ganguts are now ready? It is time.
Will you thank Mother extremely for her painted card. On returning home I will suggest a very minor addition to make it into the King George V, after completion. Her bon has been extremely useful to me and will be largely in use at today's late dinner, my official Christmas dinner. You also state that another parcel is under weigh. I have received a few minor recognitions of the season; namely:--
(a) A Christmas card from their Majesties, which I enclose.
(b) [A Christmas] tobacco bon (etc) from Princess Mary, which I will bring home.
(c) A comic card from the 4th Division
(d) cards from the Misses Finch (Their address please)
(e) card from Alice as you know. Please thank her for her card and remembrance, on my behalf.
(f) Letters from Mrs Stefan + Mrs Macmillan.
(g) I also hear we are getting some article from the Regiment's 2nd battalion.
There is nothing yet from Cousin Gussie or "the family". I think she might have written, but I have not heard from her since Crowborrough, when she wrote in the "go to glory and the grave" style.
We are hearing all sorts of faint rumours as to leave, but I do not credit any I have heard yet. I do not expect to come home till after the war, (though we all would like leave) but it is quite possible that the regiment may retire to the rear for a rest soon. As to the sweater, for some things I would like it, but fear there is no room to carry it. I will see. I want more socks. Thank you very much for the offer of Vol I of R.J. War which would be the most really useful book. I will be quite an expert on siege warfare before I read it. I am afraid the official history of this war will be quite a big book but we must get it. What we really want now of published books is Oman's Peninsular War.
I have seen an article in the Christmas London, by Wells,