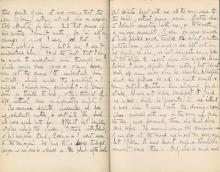 these points of view at once & says that the idea of being nothing at all has an irresistible attraction for him. Into that phase of his nature I cannot enter, for in all my changes of mood I never feel that. I may worship him but -- no, I don't understand him. It is the fact that I long so much to understand him thoroughly -- which would take years - & may never even get the chance to understand him at all, which makes the possibility -- I suppose I should say the probability -- of losing him so terrible to me, & the thought of life without him so infinitely empty.
The conclusion definitely unreached, we rose up, reluctantly rather, & went to tea, which we were again late for. After it Mrs. Leighton strolled round the garden I think with Roland, & Mr. Leighton, Clare, Evelyn & I went down to the sea again. We had to go before twilight began as no one is allowed on the beach after dusk. Mr. Leighton kept with me all the way down to the beach, without saying much. Whether due to Roland's connection with me, or to something in my own personality, I seem for some reason to have pleased & even touched this silent man & rather pathetic man, who is more or less left out by his family, & who, as Mrs. Leighton says, does not get spoken to except when she speaks to him. Roland, I know, despises him rather, but I do not really see any reason why he should. Mr. Leighton shows his fondness for me in quite small & very tactful attentions. This morning, for instance, he was out before breakfast to pick me a rose which he presented to me without a word when I came into the dining room. Clare conversed with me on the way up from the sea, more personally than she had ever done before. In many ways she reminds me of myself at the same age -- and so long ago, but I seem to have learnt such a tremendous amount since then. Only she is much more