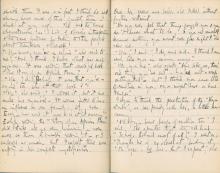 sensible than I was -- in fact I think she will always have more of this quality than I shall at any age. She has the same characteristic as I had of obvious introspection & the same fondness for talking to other people about themselves, & herself.
"You know, you're a cynic," she said to me, "And I think I know what has made you one. It was reading that dreadful book "The Story of an African Farm".
"Yes, I said, "Perhaps it was. But you're a cynic too. Was it that book?"
"Yes", she said, "I adored it, but it has made me cynical. It seems fated to have an influence on our family."
Once her reserve was broken she talked without further restraint. "Do you ever feel that things puzzle you & you don't know what to do, & you are miserable because nothing you want ever goes right?" she asked me.
"Yes," I said, "I do, and did -- I think I am very like you in many ways."
"Yes, you are," she agreed. "And like us, there's one thing you're not -- you're not a scrap sentimental -- but I think you have lots of emotion in you, & you might have a bad temper."
I began to think the penetration of the "Bystander", as her family calls her, a little uncanny. "All of you have heaps of emotion too," I said. She admitted that they all had. "Perhaps Roland most of all," I went on, "though he is so clever at hiding it.
"Oh yes - he has. But i expect," she