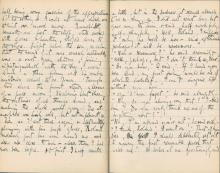 help being very conscious of the appropriateness of the setting -- I could not have chosen one to suit our mood more. Immediately beneath our feet the cliff, still covered with gorse & heather, sloped down to the shore. Right below the sea, so calm that the sound of it was scarcely noticeable, was a vast grey shadow, joining indistinguishably with the sky, over which a thin filmy veil of sombre mistiness seemed to be drawn. Through this shone the faint steady gleams of a pale moon, disclosing but blurring the outlines of all things round, and making the whole world grey. The atmosphere was fairly cold, but not unpleasantly so.
Then, as I sat there gazing, Roland suddenly put his arm round me and drew me close to him -- closer than I had ever been before. At first I half-resisted a little, but in the darkness it seemed absurd to be so shy, so I did not resist long but gave way to him & said half-mournfully, half-playfully, "Well, Roland, I suppose it may as well be now -- since afterwards perhaps it will be nevermore."
"Now or Nevermore?" he said dreamily. "Well, perhaps, but I don't think so, dear."
"Do you know," I said, "If I heard you were dead, my first feeling would be of absolute disbelief. I can't imagine life without you now."
"You'd soon forget," he said abruptly.
"Why do you always say that?" I asked him "Do you really think me one of the forgetting sort?"
"No, I'm afraid you're not," he said sadly.
"I think, Roland" I went on, "That if you died, I should deliberately set out to marry the first reasonable person that asked me." He looked at me questioningly and