“Angels of Mercy”: Canada’s Nursing Sisters in World War I and II

Although Canada’s women had served as nurses in earlier wars, they acquired formal recognition during World War I. The essential role they played in this war assisted in winning the vote for women. In World War II more than 4,000 women served as nursing sisters in all three branches of Canada’s military service. McMaster’s collections include the memorabilia of two of these “angels of mercy”.

Canada’s nursing sisters played a vital role in the care of wounded soldiers during World War I and II. Called “nursing sisters” because some of the earliest nurses belonged to religious orders, they were accorded the rank of lieutenant during World War I. The nurses were an integral part of the Canadian Army Medical Corps; the majority worked overseas in military hospitals and in casualty clearing stations. Often placed on the front-line, they ministered to injuries for which no one could have trained them, and they were seen as angels of compassion by the soldiers whose lives they saved.

Canada’s military nurses had played an important role in wars before World War I. They were part of the medical team deployed to nurse soldiers during the Northwest Rebellion and they also served in the Boer War. In September 1914, 105 Canadian military nurses sailed to England with the first contingent of Canadians. By 1918, more than 3,000 single Canadian women had left their familiar surroundings and volunteered to serve their country by caring for the wounded and sick overseas. The nurses were nicknamed “Bluebirds” by soldiers, grateful for a glimpse of their blue dresses, white aprons and sheer white veils. They served in a total of thirty military hospitals and casualty clearing stations in France, Belgium, Greece, Malta and Eastern Mediterranean. The work was hard and dangerous; on 19 May 1918 No. 1 Canadian General Hospital in Étaples was bombed.

The dangers of working at the front were not restricted to land operations. One of the innovations of the First World War Medical Services was the introduction of the hospital ship, used to evacuate the sick and wounded back to Canada. These ships were also subject to enemy attack such as occurred on the night of 27 June 1917. The Llandovery Castle, a British merchant vessel serving as a Canadian hospital ship, was torpedoed while returning to Liverpool, England from Halifax, Nova Scotia. Of a Canadian crew and medical staff totalling 258, only twenty-four survived. Among those who perished were the fourteen Canadian Nursing Sisters aboard, among them Mae Belle Sampson, who had trained in Hamilton, Ontario. Escaping lifeboats were pursued and sunk by the German U-boat and the survivors machine-gunned. 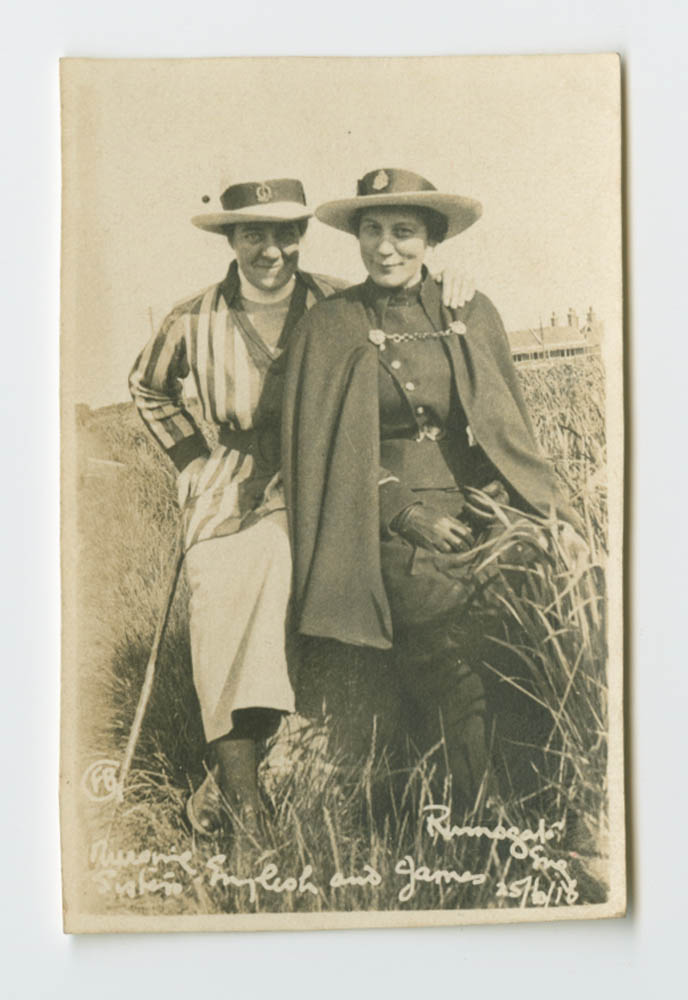 Memorabilia of the service of two Canadian nursing sisters, Sister Mary English (World War I) and Sister Nancy Kennedy-Reid (World War II) can be found in McMaster University Library’s collections. Sister English served in France during the First War, as is indicated by her war badge service certificate, issued in Victoria, B.C. in 1919. This certificate would have been issued to Sister English to acknowledge her service with the Canadian Expeditionary Force. She also saved two Christmas cards from the No. 1 Canadian Stationary Hospital, 1915-1916, an invitation to a War Service Dinner in Paris, dated August 1918, some postcards, photographs of nursing sisters with whom she worked, and some photographs of soldiers and hospitals.

After Germany’s invasion of Poland in September 1939 and the declaration of war, Canada’s Nursing Sisters answered the call of duty again. This time, Canada’s nursing service was expanded to all three branches of the military: Army, Navy and Air Force. A total of 4,373 Nursing Sisters served during the Second World War.

Nancy Kennedy-Reid was born in Carnarvon, North Wales, on 2 August 1902. She immigrated to Canada in 1926 and trained as a nurse at the Montreal General Hospital in 1929. She travelled with The Queen’s Own Cameron Highlanders of Canada to England in December 1940. Once there, she worked as an Assistant Matron, Royal Canadian Army Medical Corps (RCAMC) at No. 1 Canadian Hospital, Marston Green. The hospital moved to Hailsham, Sussex two years later. In June 1942 she was promoted to Matron. She was posted to No. 1 Canadian General Hospital, Andria, Italy in November 1943, later moving to Rome. She returned to England in August 1944 to serve at No. 23 Canadian General Hospital, Leavesden, near Watford. Kennedy-Reid was appointed a member of the Royal Red Cross by George V. Following her return to Canada on 1 January 1946, she became the director of nursing at St. Anne’s Hospital, St. Anne de Bellevue, Québec. She retired in 1967 and served as President of the Canadian Nurses Association the following year. 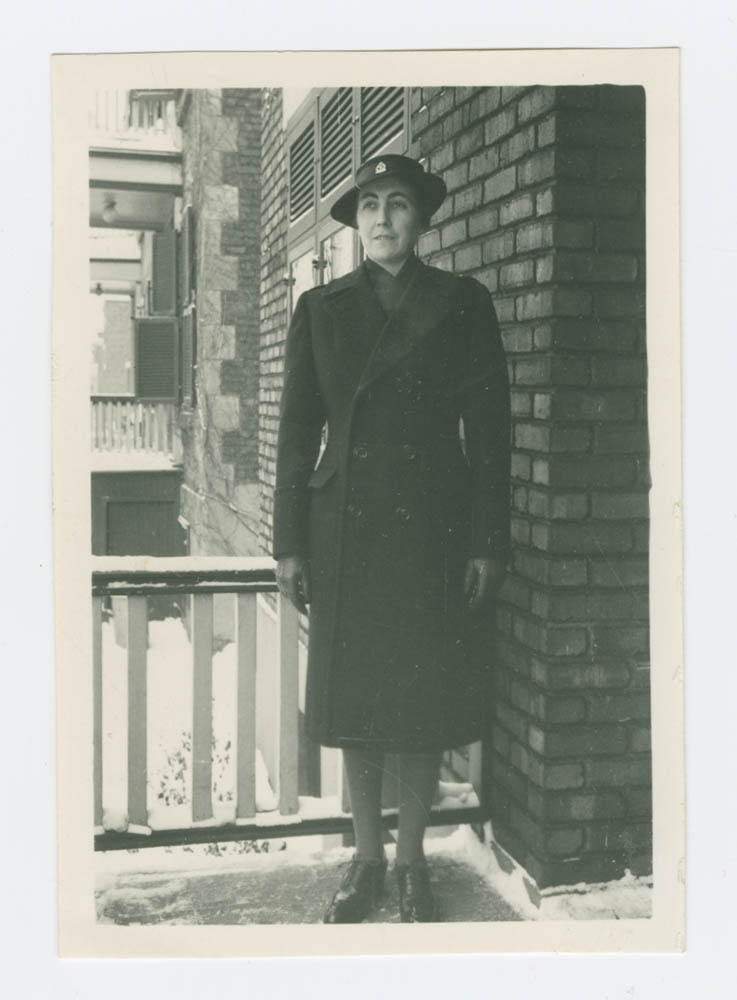 Kennedy-Reid’s mementos are contained in three scrapbooks recording her service in England and Europe. They include daily orders and nominal rolls as well as a “berthing card” stating the particulars of her accommodation aboard the HMT ship which she boarded from Moncton on 23 December 1940. Photographs of wounded soldiers after the Dieppe raid, hospitals, the British countryside, and Italian scenes including the Amalfi coast and Rome are also pasted in. There are also letters, cards and invitations documenting her work and her social life; one item is “No. 1 Canadian General Hospital Nursing Sister’s Theme Song.” Of considerable interest are her medals, identification bracelet, and a piece of shrapnel. The latter could have been a souvenir of a close call; nurses frequently cared for the wounded while shells exploded around them.

Canada’s Nursing Sisters worked amidst omnipresent danger and incurred a considerable number of casualties as a result of both disease and enemy attacks. Their primary tasks were to give the wounded comfort and try to ensure their safe return home. They had a profound effect on their profession and on the war effort in both World Wars. The Bluebirds were the first Canadian women to vote; the enfranchisement of women was one of the most dramatic changes brought about by the nurses’ overseas service in World War I. In both wars, these “angels of mercy” risked their own lives to contribute to Canada’s eventual victory.

When I first came to Birmingham town.

I had had a bad trip, in a nasty old ship

And the cold in my billet, just gave me the pip.

We came out to nurse our own troops,

But were greeted with measles and whoops.

Now I'll be a granny, and sit on my fanny,

And keep warm with turpentine stupes.

When I return to my home town

They will bring out the band, give the girls a big hand,

Being a nurse in the force, I'll be quite renowned.

And I'll never forget all the fun,

That I had, since I joined Number One

I was happy and gay, to have served with MacRae