The invitation to “join the Navy and see the world” certainly fulfilled its promise for young Englishman Charles Jones. Only sixteen when he joined the service, Jones was a Gunner’s Mate on the battleship Marlborough during one of the most dramatic and destructive sea battles of the First World War.

Charles Bertram Jones was only 16 years old when he joined the British Navy on January 31, 1911. As his service record shows, he was all of 5 feet, 6 ¼ inches tall, held a rating of “Boy second class”, and reported to the HMS Impregnable, which was one of several admiralty-operated centres that provided pre-sea training to boys as young as fifteen. At the time, the British Navy was considered to be the strongest in the world. Ever since the Battle of Trafalgar in 1805, no other nation had been able to challenge British naval supremacy. In the years leading up to the First World War, Germany greatly expanded its fleet, but by the time war broke out the British Navy was still viewed as superior, particularly in terms of numbers of new battleships and battle cruisers which followed the formidable dreadnought design. It was to one of these ships that Jones was assigned in June 1914, the HMS Marlborough. 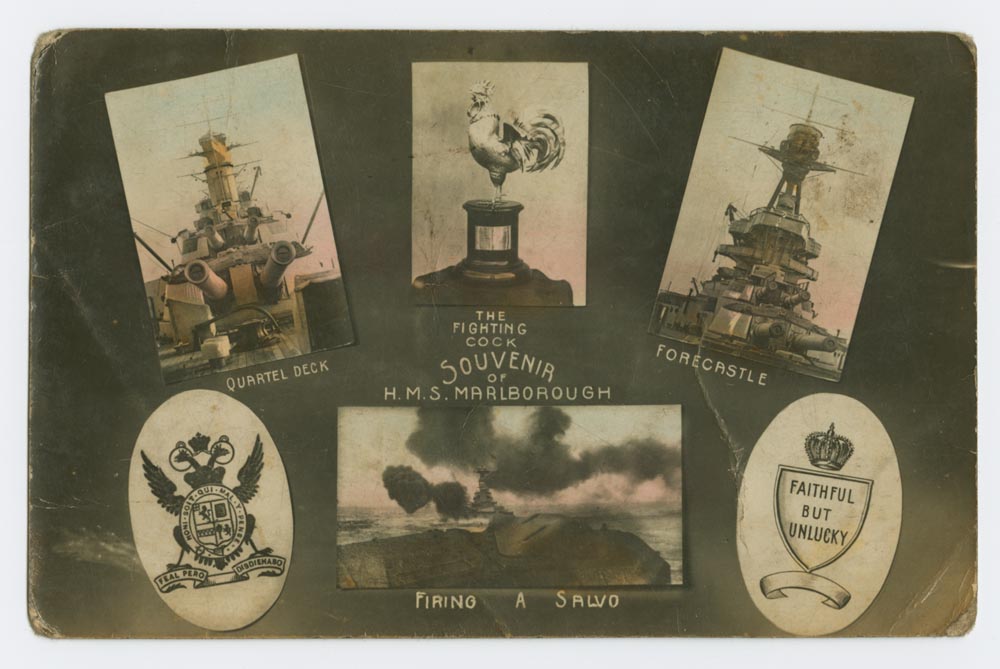 The Marlborough was a battleship of the Iron Duke class and was the Vice-Admiral of the 1st Battle Squadron of the Grand Fleet. The ship had been launched in 1912 and was completed in 1914, so Jones was among its first crew. By this time, Jones had risen to the rank of Able Seaman and was a gunner’s mate.

During the first two years of the war, the Marlborough did not engage in any direct combat. She served in the North Sea and did her part in conducting a “distant” blockade of Germany, out of range of German U-boats. Life onboard the Marlborough would have developed into a routine. In order to keep up morale, various diversions were introduced. As postcards included with Jones’ service record reveal, the crew of the Marlborough engaged in on-deck dance lessons and were entertained by the ship’s mascot—a bear! However, these peaceful pursuits would not last.

While the strategy of the “distant” blockade was relatively successful, many British naval leaders sought a full-scale battle between their Grand Fleet and the smaller German High Fleet, believing that it would be a decisive victory for the British. They would soon get their wish for battle, but without the anticipated result. On May 31 and June 1, 1916, Britain and Germany engaged in the Battle of Jutland, the largest naval surface battle in history. It was here that Able Seaman Jones and the Marlborough participated in their first conflict. Jones managed to compile a “Diary of HMS Marlborough’s firing off Jutlands May 31st 1916”, a four-page document that summarizes the Marlborough’s participation in the battle minute by minute. 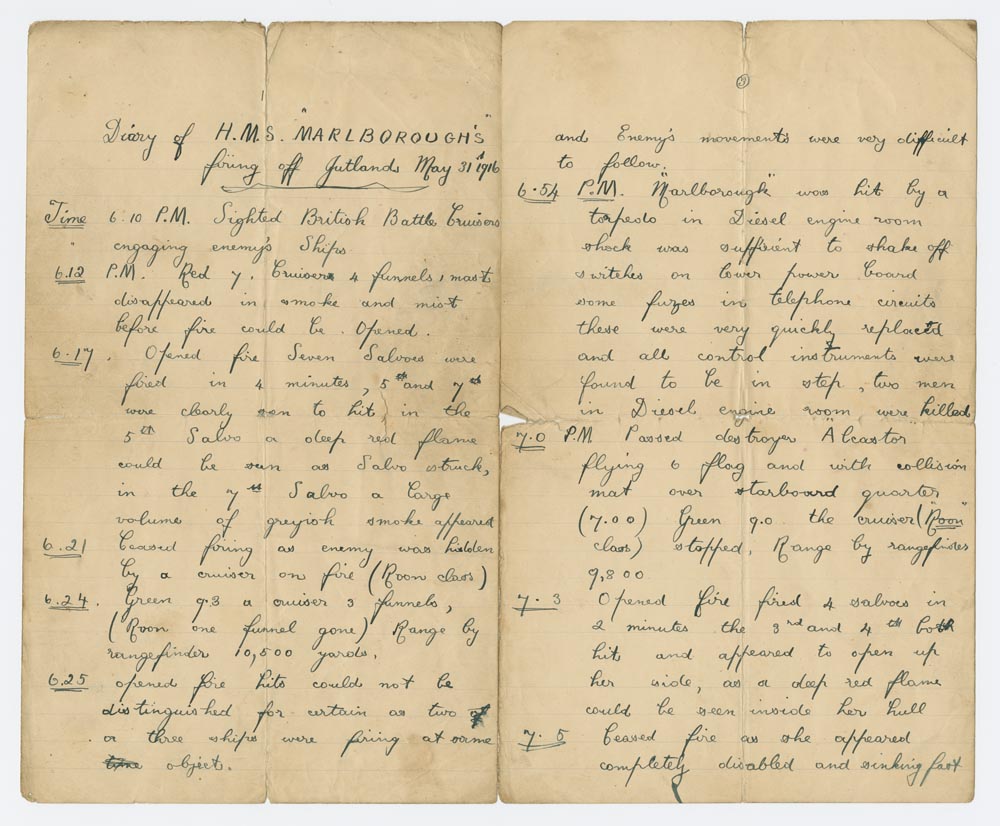 As Jones recorded: “6:54 p.m. Marlborough was hit by a torpedo in Diesel engine room. … Two men in Diesel Engine room were killed.” In spite of this hit, the Marlborough was able to retaliate. Just 9 minutes later, as the diary states: “Opened fire. Fired 4 salvos in 2 minutes, the 3rd and 4th both hits and appeared to open up her side.” At 7:12, they opened fire again, releasing “14 salvos in 6 minutes.” “In the 6th salvo, large cloud of grey and white smoke appeared near the foremast; in the 12th salvo, 2 hits could clearly be seen under the bridge and rather low.” Before signing the diary, Jones added to the credibility of his report by noting that “only hits that were actually seen and confirmed by two or more persons are given.”

In spite of the loss of two crew and the infliction of a hole 70 feet by 20 feet wide, the Marlborough fared better than many other British ships—fourteen were destroyed and over 6,000 men were killed. The Germans lost eleven ships and about 2,500 men. British leaders and the British public were stunned by the devastating outcome. However, while seemingly a victory for the Germans, the Battle of Jutland ironically left the British in control of the North Sea surface because the Germans were reluctant to re-commit to large-scale battles for fear of losing too many ships. The British fell back on their “distant” blockade, and the Germans accelerated their U-boat campaign. German U-boats would become the greatest naval challenge of the war for the British.

After the Battle of Jutland, the Marlborough spent 3 months undergoing repairs before returning to duty. However, the ship’s next great adventure did not occur until after the end of the war. In 1919, the Marlborough was assigned to the Mediterranean where she took part in Black Sea operations, most notably the evacuation of surviving members of the Russian royal family from Crimea during the Russian Revolution. Thus, Jones had the opportunity to see such figures as the Dowager Empress Maria Feodorovna and Grand Duke Nicholas gracing the deck of the Marlborough. The following year, Jones was transferred to the Revenge and retired from the Navy in 1924 at the ripe old age of thirty and at the increased height of 5 feet, 7 ¼ inches, pension and medals intact. Meanwhile, the Marlborough had been refitted and was transferred to the Atlantic Fleet in 1926. Six years later, in compliance with the Washington Treaty, she was sold for scrap.