“The difficulties will argue for themselves”: Mulberry Harbours and the D-Day Landings

At the mid point of World War II, in August 1942, the tragic events at Dieppe demonstrated the terrible risks of attacking a heavily-defended port. The Western Allies knew that a massive amphibious assault was necessary in order to loosen Hitler’s stronghold on Europe, but how to execute such an operation effectively, without again suffering huge losses, was a vexing and complex problem. A vital part of the solution was the construction of artificial harbours, codenamed Mulberry.

The allies determined that Normandy would be the best location for a landing: it was a less-defended area at which an attack would be unexpected, and was close to the deep-water port of Cherbourg, which they hoped to capture once they had gained ground. Since the flat, open Normandy beaches offered no natural harbour, the forces would have to bring their own: man-made structures on which troops, equipment, and munitions could be safely landed, then reinforced by the regular arrival of fresh supplies and men. These artificial harbours were already under development at the time of the Dieppe Raid.

Logistics demanded that the harbour components be designed, tested and constructed in Britain, customized to specific hydrographical and topographical conditions, including Normandy’s 24’ tides, then transported across the Channel and erected quickly and with maximum efficiency. All stages had to be carried out in utmost secrecy. 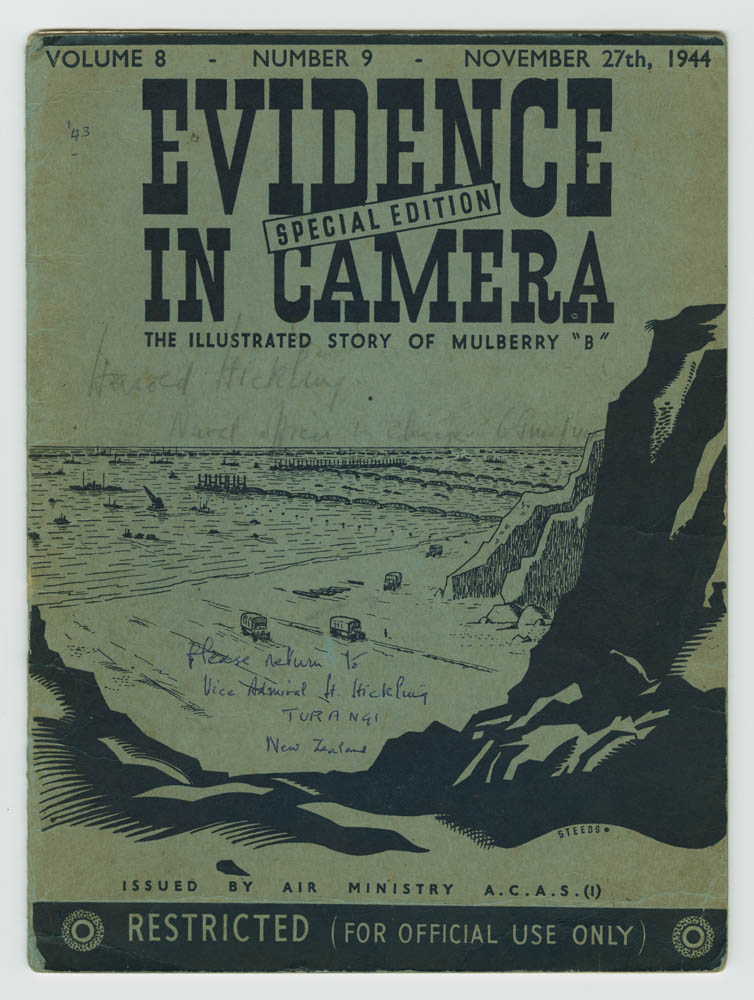 Winston Churchill had conceived of creating rudimentary harbours by sinking sand-filled barges in designated locations during World War I. Although the concept was not used at that time, in 1941 the British War Office established a department to evaluate and refine artificial harbour designs, including one submitted by Welsh civil engineer Hugh Iorys Hughes. Responsibility for the massive, multi-dimensional project was given to Lord Mountbatten’s Combined Operations, with much of the work contracted out to the War Office. A test site was established at Solway Firth, Scotland, the coastline of which was similar to Normandy, and models were also tested at the National Physical Laboratory in Teddington, using tanks and a special wave-making machine to simulate Channel and shore conditions.

The extreme difficulty of the project meant that progress was slow and, on 30 May 1942, a frustrated Churchill sent a terse memo to Mountbatten:

PIERS FOR USE ON BEACHES

They must float up and down with the tide. The anchor problem must be mastered. Let me have the best solution worked out. Don’t argue the matter. The difficulties will argue for themselves.

On the beaches of Dieppe only a few months later, the sacrifice of Canadian troops pushed the testing process into even higher gear. Models were finalized and, at the August 1943 Quebec Conference, the formal decision was made to proceed and build a breakwater. 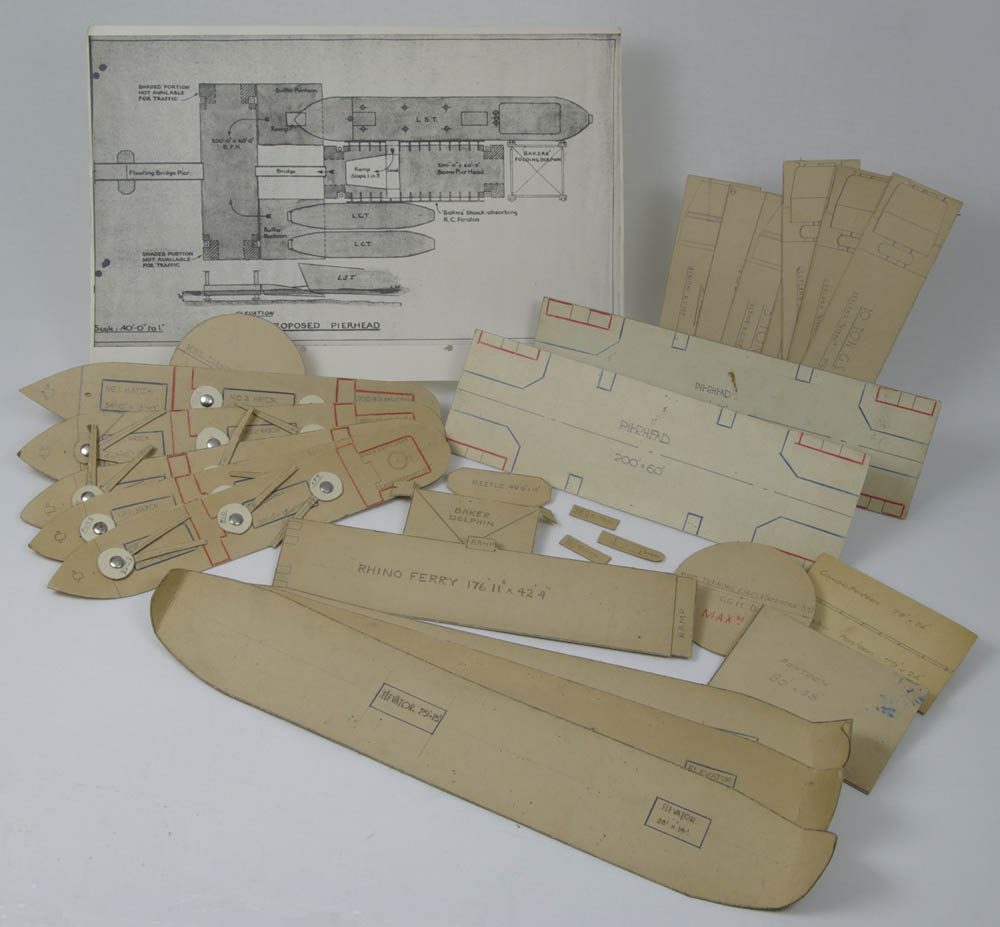 To select sites for the harbours, officials gathered information from both public sources and technical surveys. Postcards and even holiday photos of French beaches were collected and used in conjunction with aerial photographs. Covert expeditions by Royal Engineers provided data on tides, depths and topography, along with samples of sand, gravel, and soil. Two locations were chosen: off Saint-Laurent, codenamed Omaha Beach, where Mulberry A would be erected for the American operation, and off Arromanches, codenamed Gold Beach, where the British would establish Mulberry B. The latter would become known as 'Port Winston”. Each would be the size of Dover harbour.

Three types of structures were necessary: the breakwater itself, pier heads, and floating roadways to connect to the shoreline. Each component was given a codeword to maintain secrecy for the operation. The breakwater was to be comprised of three elements: a floating outer line (Bombardons); over 200 caissons (Phoenixes), which were huge concrete structures (each nearly 200’ long and 60 or 25’ in depth) that were airtight but be could be sunk and refloated; and an assembly of obsolete vessels that would be scuttled to form a protective line of block ships (Gooseberries). The second structures were pierheads, floating pontoons (Spuds), which were attached to huge legs in a manner that permitted the pier head to move up and down with the tides. Connecting the pierheads to the shore was a total of 10 miles of floating roadways (Whales). Full-scale production of the components involved, among other materials, some 50,000 tons of fabricated steelwork, and the participation of over 200 companies across England and in Wales to complete the work on schedule, an extraordinary feat of engineering, manufacturing, and construction.

The first boats destined for the harbour set out from England on 4 June; most were positioned about five miles off the coast of France when the invasion began. The concrete caissons and block ships arrived and were sunk in their designated locations within minutes on D Day + 1 to form part of the breakwater. Within six days, Mulberry B was operational and remained so until November. It is estimated that it was used to transport 2.5 million men, ½ million vehicles, and 4 tonnes of supplies during its existence. After closure, many components were salvaged for re-use in the war effort, and for the reconstruction of Normandy. Some remaining structures can still be seen offshore and on the beach at Arromanches.

Tragically, the Omaha Beach harbour was in use for only ten days before it was destroyed by fierce storms that also damaged but did not incapacitate Port Winston. Indeed, components from Omaha Beach were salvaged for repairs at Arromanches. The failure of Mulberry A led to criticism of the entire project, particularly from the Americans, but the success at Port Winston was widely celebrated, even captured in popular print, including a brochure distributed in Canada which observed the Canadian connection by noting that “without Dieppe the harbour of peace might never have been born.”

The brochure forms part of the significant collection of Mulberry Harbour documents at McMaster, which also includes photographs, plans, models, and correspondence, as well as typescripts and proofs of Mulberry: The Return to Triumph (1965), written by Michael Harrison, with proofs corrected by Lord Mountbatten.