“Fused, Fizzing, and Ready to Go Off”: Bertrand Russell Takes to the Streets

Well into his eighties, Bertrand Russell lost none of his dedication to the cause of peace. Presiding first over the Campaign for Nuclear Disarmament (CND), and then the Committee of 100 (C100), he marched, mobilized and even sat down in London’s streets of power to protest the adoption of nuclear weapons.

Not long before his eighty-sixth birthday in 1958, when most old people are content to sit in comfortable chairs and perhaps take quiet walks, Bertrand Russell launched a movement that would eventually send thousands of marchers into the streets of Britain. Russell had been deeply concerned by the invention and use of the atomic bomb from the very beginning; on 18 August 1945 he wrote: “it is impossible to imagine a more dramatic and horrifying combination of scientific triumph with political and moral failure than has been shown to the world in the destruction of Hiroshima.” One avenue he was to pursue in his fight against nuclear weapons was the creation of the Pugwash Conferences. 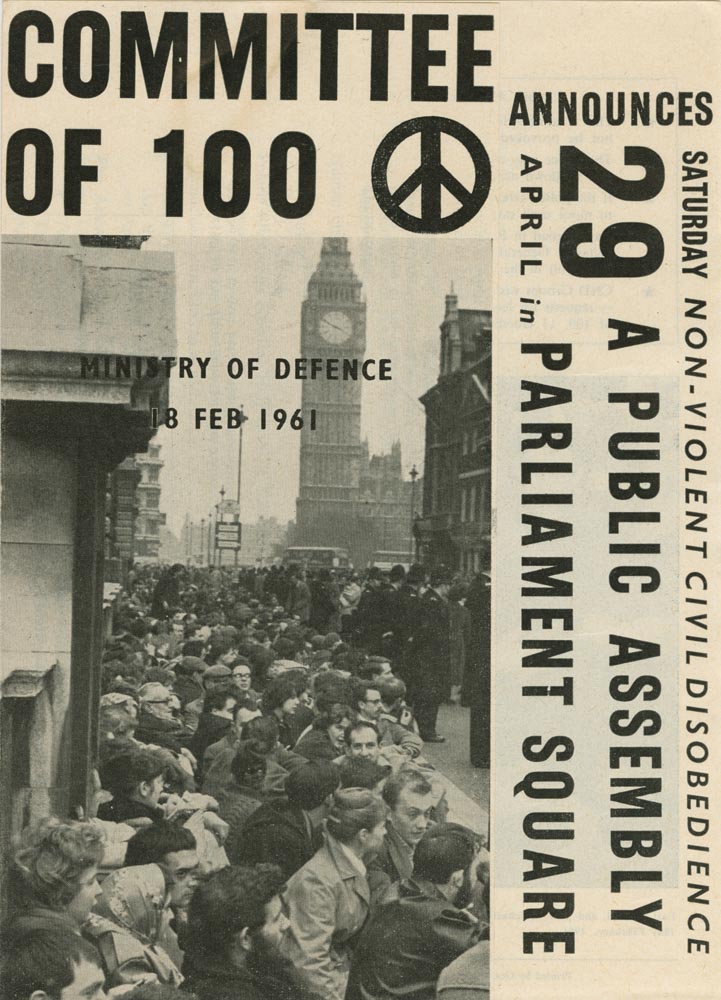 The Campaign for Nuclear Disarmament (CND) was to prove a more populist anti-nuclear strategy. The catalyst for the formation of the CND was an article by J.B. Priestley in the New Statesman advocating British unilateral nuclear disarmament in response to nuclear tests being carried out in the Pacific by Britain – the article touched a nerve with the public and the influential journal’s editor, Kingsley Martin, proposed the idea that a new organization should be created. After a few meetings, it was agreed that Russell would be the president with Canon John Collins as its chairman. The official launch, on 17 February 1958, was made to overflow crowds that filled Central Hall Westminster. Although seen originally as a pressure group, the CND grew quickly into a mass movement. It received wide press coverage and Russell was both lampooned by newspapers cartoonists and honoured with the cover of Newsweek magazine. He spoke in Manchester on 1 May 1959. [audio 1. Manchester-Speech-1-5-1959.mp3 below] 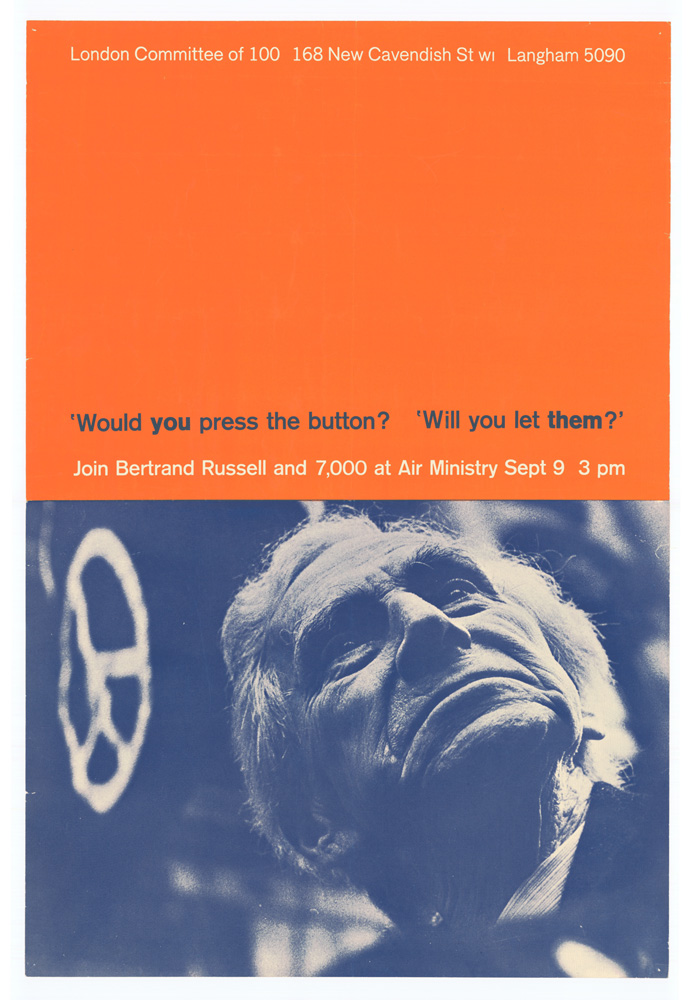 Russell gave his first CND speech in Trafalgar Square on 20 September 1959 to a crowd of about 12,000 people. Several of the marchers – they would leave the Square and march on St. Paul’s – carried the CND symbol – a design that branded the movement and remains to this day the predominant peace symbol in the world. Its design by Gerald Holtom is based on the semaphore code for “N” and “D” surrounded by a circle representing “total” – thus the symbol’s message is “total nuclear disarmament”. Controversy surrounded this symbol, however, for some suggested that it bore a resemblance to the symbol for a witch’s foot. As Russell wrote to one correspondent who thought the symbol represented death rather than life, and that its direction should be reversed: “To the best of my knowledge, the Navy does not employ signallers who work upside down.”

However, a year later Russell had grown impatient with the effectiveness of the CND as an engine for change. He resigned on 24 October 1960 as CND president in order to head, along with Rev. Michael Scott, the Committee of 100 (C100). This was a group willing to undertake non-violent civil disobedience. Russell did not, however, cut all ties with the CND. A month later he accepted an invitation from a Canadian group, the Combined Universities Campaign for Nuclear Disarmament, to serve as their Honorary President. He continued to appear at CND events in Britain and to send messages to be read at events he could not attend for the rest of the decade. The CND is still in existence today.

The C100 staged an impressive first event on 18 February 1961 – it began with a march from Marble Arch to Trafalgar Square where there were speeches. [DVD 1. 18-2-1961 event below] The crowds then went on to the Ministry of Defence where Russell taped a message of protest to the doors; Russell, now 88 years old, then sat in the street with his wife Edith and thousands of others for close to three hours. The protest was timed to coincide with the arrival of Polaris missiles in Britain. There were, however, no arrests. This impressive event was followed by several others, culminating in Hiroshima Day, 6 August 1961. It began with a silent vigil at the Cenotaph in Whitehall, then moved on to Hyde Park where Russell was prevented from speaking with a microphone. It ended in Trafalgar Square where Russell was finally allowed to speak [audio 2. Speech-6-8-1961.mp3 below]. The following month Russell and Edith were found guilty of refusing to keep the peace and both served seven days in prison. That autumn the pressure was ratcheted up with various sit-downs, marches, mass arrests, and gatherings in Trafalgar Square – on 29 October Russell was joined there by actress Vanessa Redgrave.

The culmination of the activities of the C100 came with demonstrations at Wethersfield Air Base, Manchester, York, Cardiff, Bristol and Ruislip, the headquarters of the USAF in Britain. Russell was not present at any of the demonstrations. The authorities zeroed in on six members of the C100, charging them with offences against the Official Secrets Act. They were tried at the Old Bailey the following February – Russell claimed that he was equally responsible but this time the authorities wisely ignored him. He had to content himself with addressing a mass rally on 25 February 1962 in Trafalgar Square to protest against the prison sentences handed out the previous week to the six members [audio 3. Speech-25-2-1962.mp3 below]. The plinth of Nelson’s column in the Square was draped with a Wethersfield Air base sign. From then on, the movement wound down. Its main organizers were in jail. Russell called for a sit-down of 7,000 for 9 September outside the Air Ministry but he had to call this off because of lack of support. The following January, now approaching 90, he resigned from the Committee of 100. He spent much of the year at his home in Wales, but still continued his work for peace; even far from the streets of London, Russell was involved in mediating the Cuban Missile Crisis and worked on his book, Unarmed Victory, about the threat to the world presented by that crisis as well as the ongoing dispute between China and India.