Gerald Blake, an English Participant in the Christmas Truce of 1914

The Christmas Truce of December 1914 has become the stuff of legend. In a savage war which dragged on for four long years and in which perhaps eight million people died, it seems almost inconceivable that groups of soldiers in the trenches, the declared enemies of one another, could have exchanged songs and cigarettes, even for a brief interlude. Gerald Blake was there.

Gerald Blake served with the London Rifle Brigade, British Expeditionary Force during the First World War. The Gerald Blake fonds contains more than sixty letters he wrote to his mother and to his brother, Clive, between November 1914 and June 1916. One letter, written on December 27, 1914, sets the stage for the incredible Christmas truce that occurred between British and German troops.

It is December 1914. Blake is in Belgium, writing home. He begins his letters by asking for newspapers, and recounting what he knows about the progress of the war. He tells Clive to send over socks, and lightly berates him for sending over a khaki shirt—absolutely worthless in the wintry conditions of the warfront. He writes at length about the battle cruisers, and it is evident that Gerald and Clive are engaged in an ongoing dialogue about the battles at sea, a conversation which spans the period of their correspondence. 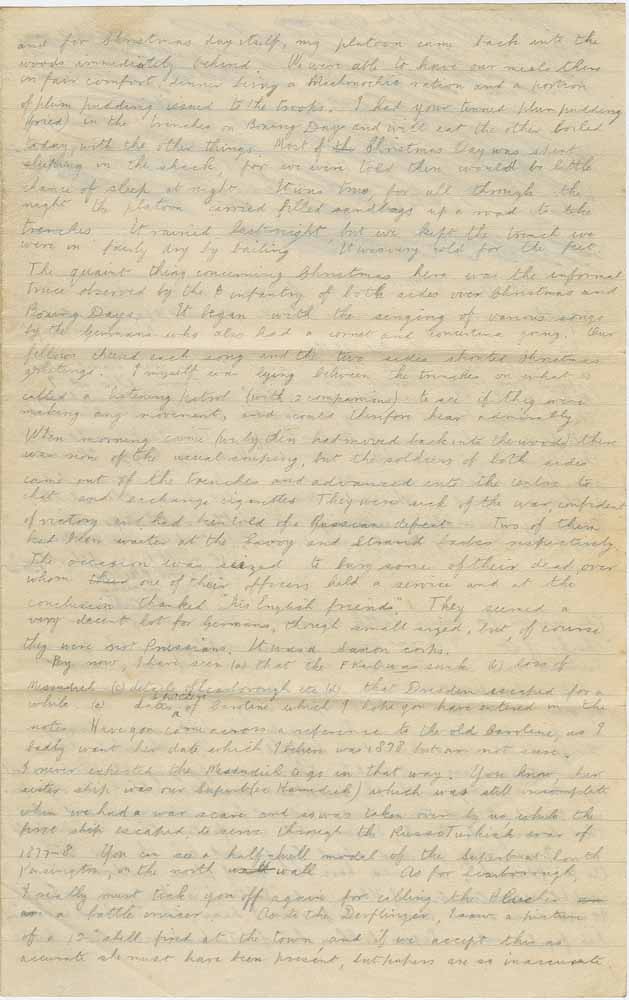 Gerald describes his daily routine. He is billeted at a café, where the men pay their landlady to prepare their food and coffee. The soldiers remain at the back of the restaurant during the day, but move into the main café area for warmth at night. When the soldiers are neither at their billets nor in the trenches, they do fatigues in the woods. He recounts one particularly amusing encounter he had at the butcher’s shop. To his dismay, there were no sausages left. What ensued was a rather curious scene: the butcher’s daughter took him into the back room, where she set to work funnelling meat into a sausage. A cup of coffee in his hand, Gerald engages in a conversation with the butcher’s daughter, wife, and mother-in-law, who pummel him with questions and praise his grasp of the French language. The women remark that all of the men from his regiment converse proficiently, but Gerald discloses to Clive that this is only because most of the other soldiers do not make an effort to speak the language. Gerald is amused by the way “regulars trot into a shop and ask for a thing in ordinary English, and get it,” because they take for granted that everybody speaks the same language.

Gerald writes about the uncomfortable, wet conditions of the trenches. “I wish the Kaiser had been in them, it might have cooled his ardour,” he scoffs. He writes rather nonchalantly about his regiment’s attack on the Germans. “Our guns had bombarded the Germans all day previously, and I believe their loss, all told, was very severe.” This straightforward description of his encounter with the German troops is in stark contrast to his account of the Christmas truce that takes place just one week later.

In his letter dated 27 December 1914, Gerald Blake devotes only half of a single paragraph to a description of the Christmas truce between the British and German forces. He records that during Christmas and Boxing days, the troops held an informal ceasefire. They sang songs, accompanied by a German cornet and a concertina (an instrument similar to the accordion), and shouted Christmas greetings at each other. The soldiers emerged from their trenches—and from behind the pretence that they were adversaries—and mingled in no man’s land, chatting and swapping cigarettes. Blake was particularly impressed with a German soldier who had worked as a waiter in London’s Savoy Hotel, and with another who had been a barber in the Strand. He ends the paragraph by saying: “They seemed a decent lot for Germans, though small sized, but of course they were not Prussians. It was a Saxon corps.”

The peculiar thing about Blake’s account of the Christmas truce is that it is inserted so casually, almost dismissively, amongst his detailed reports of other military and naval matters. Why is such a miraculous interlude described in no more than half a paragraph? With no way to tell what a lengthy bloodbath the war would prove to be, Blake could not have realized the unique significance of this event. It was, of course, to be the first and last of such truces; annihilation not fraternization was to mark the next four bloody years. Blake’s letters end in June 1916. The 1916 and 1917 correspondence between Angus Macmillan and Clive Blake indicates that they believe that Gerald has been captured by the Germans; he has obviously been reported as “Missing in Action.” The Commonwealth War Graves site reveals that Blake in fact died on 1 July 1916. We have no further details but the date is ominously suggestive – it was the first day of the Battle of the Somme.

Names of other participants in the Christmas Truce