Home Away from Home: William Fingland and the YMCA in World War I

The Canadian YMCA provided a wide variety of services – educational, social, spiritual, practical and even psychological – for Canadian troops serving overseas during the First World War. In a revealing and affectionate series of letters, William Fingland, an officer serving with the “Y”, provided vivid insights into his daily life to his sweetheart, waiting at home.

William Fingland sailed from Toronto for Plymouth aboard the SS Megantic in May 1915. When he landed in Plymouth, he sent [Jan] Etta MacDiarmid, his sweetheart in Toronto, a telegram which simply read “Safe”. For the rest of the First World War he served as an officer with the Canadian YMCA. Known to the Canadian troops as the “Y”, the YMCA became an integral part of the war effort, adopting the motto “Service to the Troops”. For the soldier serving overseas, the “Y” hut became a temporary home and refuge from the ever-present danger of enemy attack.

From the first call to arms in Canada in August 1914, the YMCA was an important part of the military community at Valcartier Training Camp in Quebec. Six YMCA officers with the rank of Captain accompanied the First Contingent when it sailed overseas. The headquarters of the Canadian “Y” in England were at Exeter Hall in London. While the major focus of the work undertaken by the “Y” was the provision of huts for the purposes of education, recreation and religious service to the troops, the officers also provided guidance and training to soldiers arriving from Canada en route to France and gave moral support to wounded soldiers recovering in British hospitals. 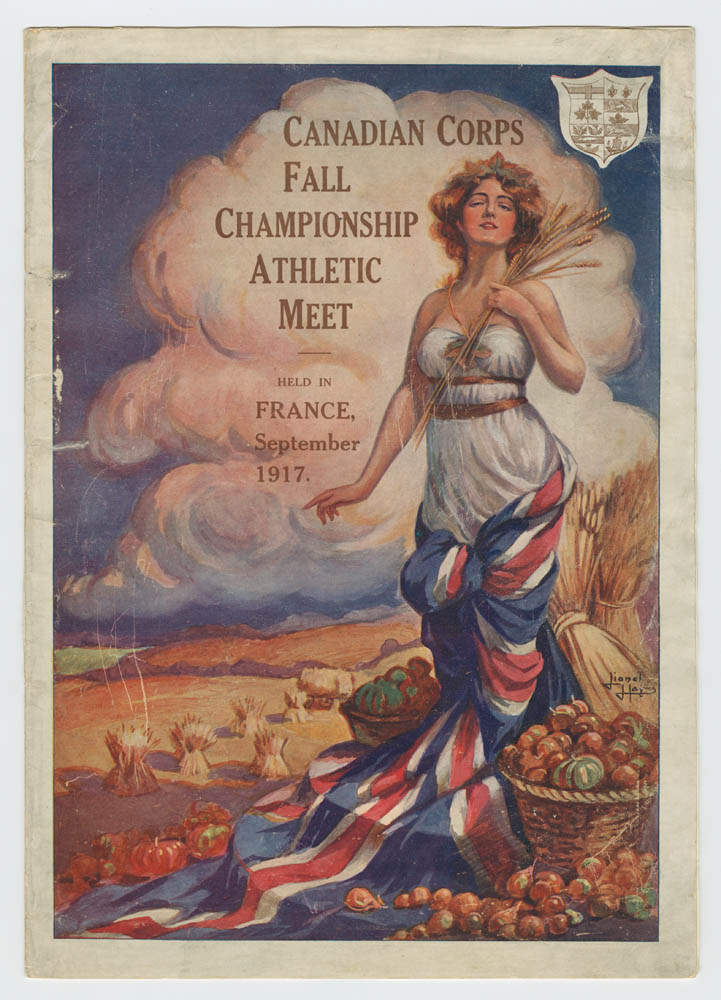 The “Y” took on the responsibility of providing recreational activities in order to meet the needs of the soldiers and to deter them from resorting to alcohol. Services included the provision of a “dry” canteen, writing rooms and counselling, supplying meals and hot tea, a laundry, a savings bank and postal facilities. Even stationery was provided for writing home to loved ones. By May 1917, there were 140 officers and a complete programme of huts for entertainment, socialization and education in England and France. The Canadian “Y” kept close to the front line as the troops moved from Ypres, the Somme, Lens, Passchendaele and Amiens. The endurance, efficiency and ingenuity of the “Y” officers were continually tested as they closed huts in one place and quickly set up new ones in areas which were often ruins.

McMaster's Canadian YMCA with Overseas Military Forces of Canada collection consists of 32 photographs dating from 1917, pasted into a scrapbook. The photographs show a wide range of YMCA activities and include images of dugouts at Vimy Ridge, and Passchendaele, wounded soldiers, athletic events including a horse show, baseball, track and field, boxing, and a tug-of-war contest. There are also photographs of the Little Theatre in London, and the Khaki University of Canada (London Branch).

Amongst the many war collections at McMaster University are the papers of William Fingland. This archive consists of 111 letters, the majority of which were written by Fingland to his sweetheart, Etta, between the years 1915-1919, documenting his service overseas with the Canadian YMCA. Hon. Capt. William Fingland was born in Beverly Township, Ontario, on 19 September 1885. He enlisted with the Canadian Infantry in 1915 and saw service with the 20th and 16th Battalions in England, France and Scotland.

By 1916 Fingland was with the 16th Battalion, serving in France. In his early letters he acknowledges Etta's sacrifice in allowing him to go to war. The letters reveal Fingland’s doubts about his military abilities and credentials, but Etta has confidence in him, and her faith seems to have been justified. In April 1917 he writes from the field in France: “I have found a new love – my work. By this time you will know what the Canadians have done in the Arras and Vimy Ridge battle. Well, the preparation for that thing and its relation to my work has obsessed me. We knew of the elaborate preparations for the attack and we knew the toll of life would be heavy. So we strained all points to make the last days of these our comrades worthwhile. A strange bond of love grew.”

In Ypres in the fall of 1917, Fingland witnessed the German bombing which left the city’s medieval Cloth Hall and gothic Cathedral in ruins. He sent Etta some newspaper clippings, with a note saying, “Precious souvenirs for which I ran the gauntlet of my life in Ypres”. Nor did Fingland have the opportunity to return home as soon as the war ended. In a letter of June 1st, 1919 he writes to Etta:

“When I wrote you last I was doing educational work in Beaver Hut re. demobilizational gratuities, land settlement, pensions, etc. About three weeks ago I was asked to take the responsibility of the Beaver Hut as a whole. It is quite a big job…. Last week the Prince of Wales & Prince Albert paid us a visit. It was quite an informal affair and they spent about ¾ of an hour here. It was my duty to show them about and explain things. I had quite a chat with both of them.” 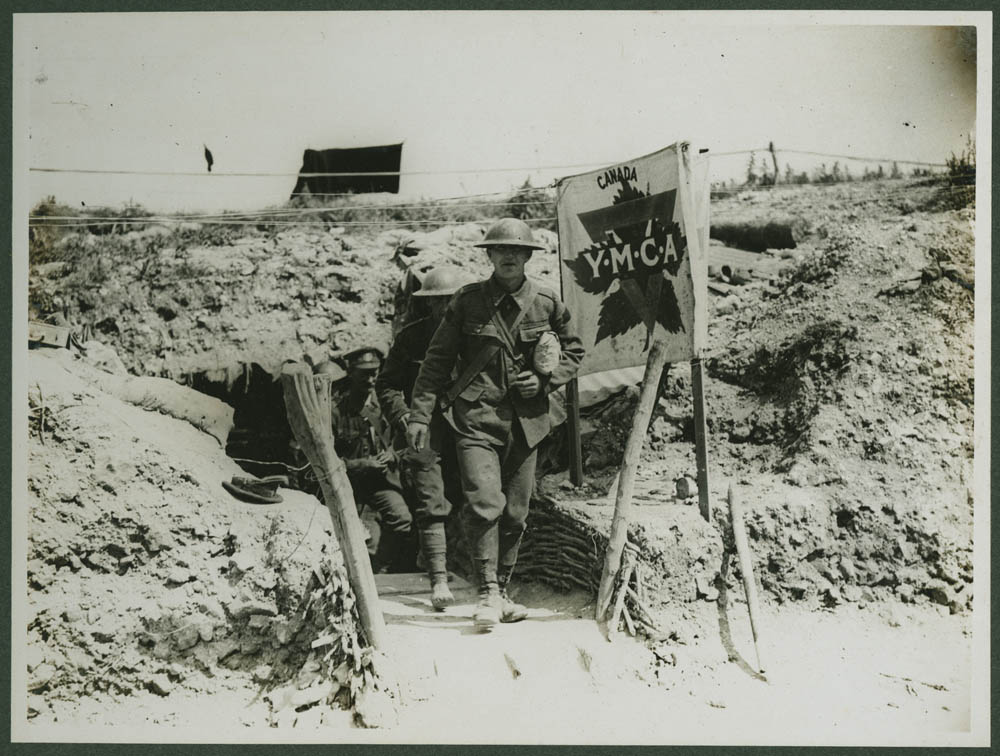 The YMCA hut also acted as an information bureau. Fingland writes about his efforts to work out a system of connecting men on leave to homes in London: “There are a great number of men, glad and anxious for the home touch, who don’t know where to go. We propose to be the link.” He hopes to have sleeping accommodations constructed and meals provided. “A great many of our boys go clear to the devil when they strike London…we propose to counteract this.” During this year he also undertook a new venture: that of teaching for the Khaki University in London on behalf of the YMCA and acting as temporary chaplain. The Khaki University functioned from 1917 to 1919, providing instruction for Canadian soldiers in all subjects other than those which formed part of their military training. It offered classes ranging from an elementary level, for soldiers who could not read or write, to advanced training in subjects like agriculture, science, and law, as well as instruction in penmanship. Following demobilization, thousands of returning soldiers enrolled in universities across Canada, prepared by the studies they undertook during wartime.

Fingland also organized agricultural groups and worked in the forestry camps in Scotland and Northern England. His letters to Etta are rich in detail and imagery, with frequent references to the Bible and to literature. Busy with essential tasks like putting up tents, getting rations, making tea and hauling water, he cannot spend as much time as a chaplain as he would like. Each letter is filled with fond memories of Canada, especially about the time he had spent with Etta before he left to go overseas. He longs for the day when the war will end, a day he hopes was not far off, so that he and Etta could be together again.

As a YMCA officer, William Fingland helped to provide Canadian soldiers of the First World War with as many home comforts as possible. He served his country by preserving harmony between officers and troops and instilling self-respect and confidence in the men, to carry on their lives as civilians once hostilities ceased. Fingland remained devoted to Etta during their four years of separation. They were married in Canada in 1920.