Winner of the Nobel Peace Prize, Englishman Norman Angell dedicated his life to the cause of peace, a life which saw Europe embroiled in two World Wars. McMaster’s Angell collection provides insights into his activities leading up to and during World War I.

In 1909 at his own expense, Norman Angell (1872-1967) published a prescient pamphlet on the Anglo-German armaments rivalry entitled Europe’s Optical Illusion. Contrary to the popular press and political thinking of the period, Angell maintained that it was not in a nation’s self-interest to have a foreign policy based on military conquest and war. In Angell’s opinion, since prosperity among civilized nations depends upon commercial cooperation, military conflict will lead to economic ruin rather than commercial advantage and social improvement of one nation over another. Re-published a year later under the title, The Great Illusion, Angell’s book became a best-seller with sales of two million copies in twenty-five translations world-wide. Before 1914 Angell had become a celebrated proponent of the “new pacifism”. 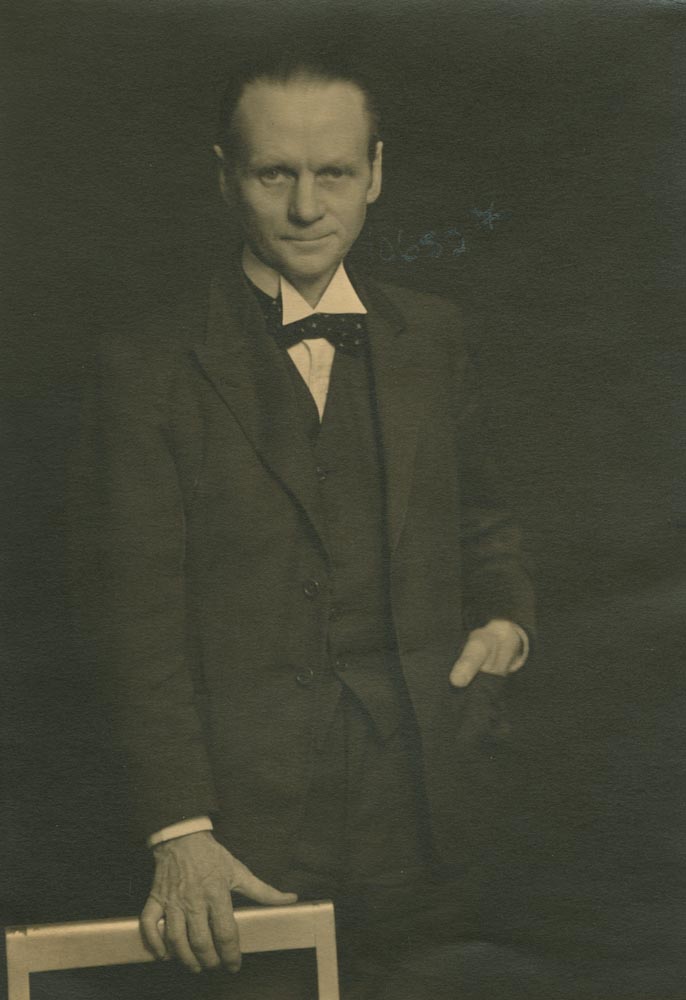 When the Balkan Wars broke out in 1912-13, critics like Sir Winston Churchill mocked the apparent naiveté of Angell’s pacifist stance: “Who is the man who is foolish enough to say that martial virtues do not play a vital part in the health and honour of every people?” For his part, Angell participated in international peace conferences and went on lecture tours, including talks at German universities. He wrote Peace Theories and the Balkan War (1914) and gathered together his essays under the title The Foundations of International Polity (1914). Sir Richard Garton established the Garton Foundation “to promote the study of international polity” (essentially, the promulgation of Angellism). Funded by the Garton Foundation, War and Peace (a Norman Angell monthly publication) was a vehicle of the British intelligentsia with contributors from universities, business, and political parties (Bertrand Russell, Arnold Bennett, and H.N. Brailsford were some of the contributors). Quite ironically, given his subsequent wartime policies, the January 1914 issue of War and Peace contained an article by the Rt. Hon. R.L. Borden, the Canadian Prime Minister, in which he proclaimed his opposition to militarism: “War is an economic crime. It is pitiful to think of the suffering and starvation that prevail throughout the earth, while nations are spending untold millions in preparation for subjugating each other, or in contending for the mastery of the world.” Even more ironic, and diametrically opposed to Angell’s viewpoint, is a call for arms in the September 1914 issue of the journal, with the bold headline “YOUR KING AND COUNTRY NEED YOU”. 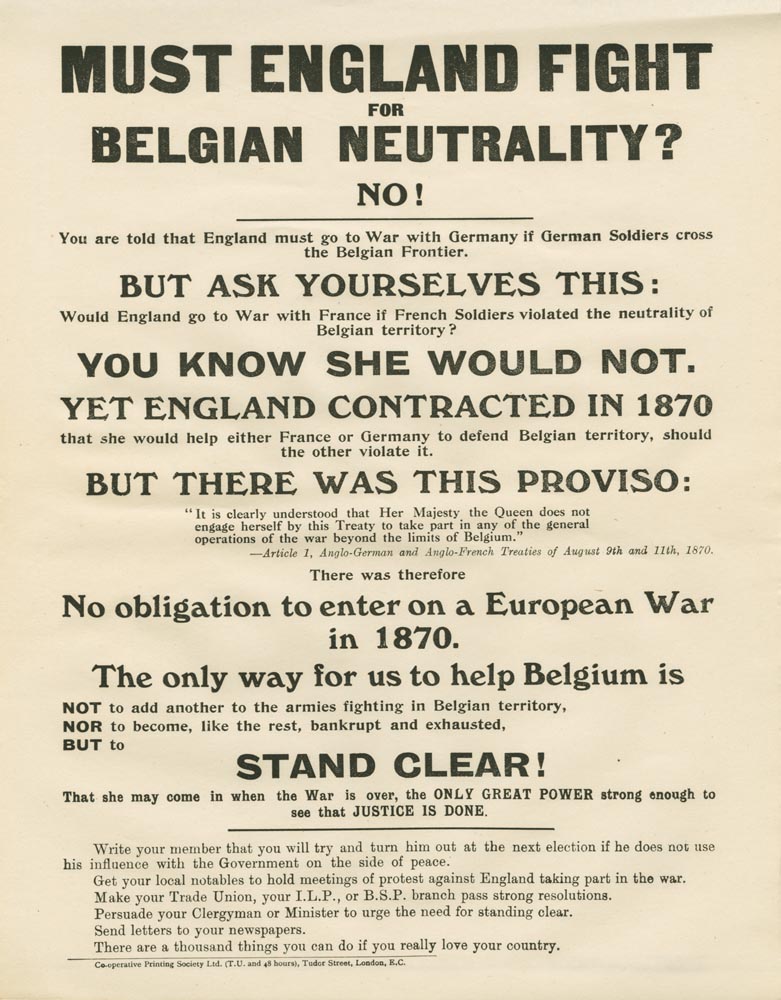 Like so many of his contemporaries, Angell was caught off guard during the summer of 1914, when nations formed complex military alliances, connected like so many dominos, on the brink of war. On 28 July 1914, in a last-ditch attempt to prevent England’s participation in the war, he hastily organized the Neutrality League. Angell arranged for the printing of a manifesto, a leaflet campaign, telegrams, and advertisements in newspapers. The Neutrality League’s announcement no. 2 co-opted the popular phrase of the moment: “ENGLISHMEN DO YOUR DUTY | and keep your Country out of | A WICKED AND STUPID WAR.” Two thousand three hundred pounds were raised in three days in support of the Neutrality League. The list of the League’s members included pillars of society: the Bishops of Hereford and Lincoln, the Lord Mayor of Manchester, Lord Welby, and C.P. Scott, the editor and publisher of the Manchester Guardian. Hundreds of meetings were held in protest of England’s potential involvement in the war. Half a million handbills were distributed on the 2nd and 3rd of August 1914, most of them in London. The Neutrality League questioned the government’s portrayal of the German menace, took issue with England’s alliance with France and Russia in defence of Belgian neutrality, and argued that Russia, not Germany, would become a dominant power in Europe if war ensued.

The efforts of Angell’s Neutrality League proved fruitless. By the end of 1915 the Garton Foundation virtually ceased its support of Angell’s work, although War and Peace continued publication during the war before it was absorbed by the Contemporary Review. At the outbreak of World War I, Angell briefly served in the ambulance corps at Dunkirk. Returning to London, he worked with Charles P. Trevelyan, a Liberal government minister, Ramsay MacDonald, Chairman of the Labour Party, and E.D. Morel, a journalist, in the establishment of the Union of Democratic Control (UDC). Opposed to conscription and censorship, the UDC took the position that a full debate of England’s war aims was in the best interests of Parliament and the public. By 1917 the UDC had attracted ten thousand members and one hundred local branches. Before he went to the United States, where he campaigned for American neutrality in the war, Angell was an editor of Foreign Affairs, the UDC’s monthly organ. By 1920 he had written six books advocating the use of peaceful means in the resolution of international conflicts. From 1929 to 1931, he served as a Labour Member of Parliament, but apart from this brief period, he steadily travelled the lecture circuit and wrote regularly for newspapers and the popular press. A tireless crusader for peace, well into old age, Angell was knighted in 1931 and was awarded the Nobel Prize for Peace in 1933.