“Support and Substitution”: Women’s Roles during World War I

A series of leaflets, directed at women in Canada and Britain during the First World War, provides insights into both the British and Canadian governments’ efforts to actively involve women in the struggle for victory.

A small collection of five rare leaflets, two of which are officially ascribed to “Women’s Section, Department of Public Information,” indicate both the closeness of Canada and Britain during the First World War and the extent to which the massive loss of men at the front had made women’s involvement essential.

The first leaflet, although it is identical in format to the others (a single foolscap sheet; this one has the serial #36898 in the bottom left corner), appears to have been issued in England. It concerns the establishment of the “Wrens” (WRNS), more properly called the Women’s Royal Naval Service. Katharine (here spelled Katherine) Furse (1873-1952), the daughter of the historian, John Addington Symonds, had been chosen to head the first VAD unit to be sent to France on the outbreak of the First World War and by 1916 she was placed in charge of the entire VAD programme in London. In 1917 she was made Director of the Wrens, “this new branch of women’s work”, designed to allow “England’s daughters” to provide “support and substitution” to the country “in its hour of need.”

The call for “England’s daughters” contains what, to the modern reader, seems to be a contradictory mixture of messages. First, it appeals to women’s courage: readers are told that the work “is both difficult and dangerous …. today, women are actually in the firing line.” Second, potential recruits are told that “fitness is the great thing to be kept in mind” but the reference is not to the physical capacity of those between 25 and 45 to whom the call is made. While “Personality is all-important,” the English class system cannot be ignored even in this time of crisis. For officers and other ranks: “Birth and education are indispensable qualifications for those highest in rank.” Such candidates must apply at the “Professional Registry” of the Ministry of Labour, while the “naval ratings:” cooks, telephone and wireless operators, clerks and aeroplane workers are directed to an employment agency. 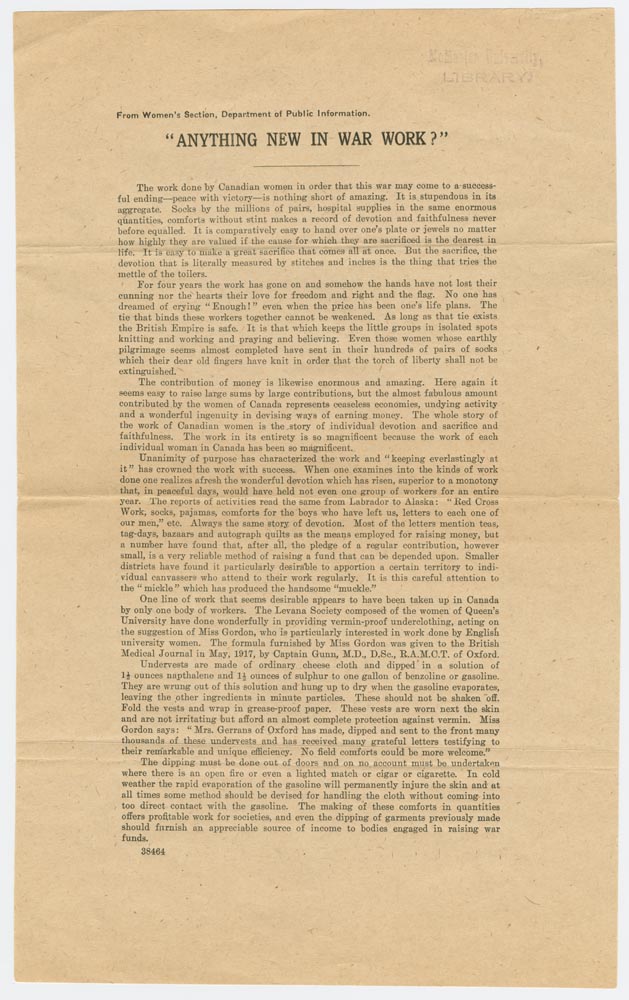 The third and final segment of the appeal is to women’s love of fashion, with a detailed description of the dark blue navy uniform: “The lower grades wear a frock coat; higher ranks wear a natty skirt and coat, but Dame Furse and her four assistants wear skirts and coat of fine-faced cloth and three cornered hats with the Royal Navy Crown and badge on a piece of St. Patrick’s blue.”

The theme of “support and substitution” is taken up in the next two leaflets which clearly originate in Canada. The serial numbers at the bottom of these undated issues suggest that the earliest one (#36841) is “Dependables and Their Work,” an appeal for women workers. Although the subheading refers to “Women Munition Workers” the message is carefully couched to inspire women in all areas of activity. Those women “all the way from Labrador to Alaska” who knit “an endless stream” of comforts for the Red Cross to supply to soldiers, provide a vital link from Canada to the trenches “in spite of the intervening Atlantic.”

The leaflet goes on to cite the heroism of the redoubtable Scottish woman Dr. Elsie Inglis (1864-1917) in leading 8,000 Serbian soldiers to safety in England from Romania by way of Finland—“and when the end was gained she paid for the success with her life.” Inglis, a medical doctor and suffragette, established a hospital fully staffed by women for use by the French government during the First World War (the British government having earlier turned down an offer of her services). She also arranged for women’s units to be provided in other areas of warfare: Serbia, Salonika, Romania, Malta and Corsica and Russia. Inglis was taken ill in Russia and died shortly after her return to England, on 26 November 1917. Reference in the leaflet to her death “last November,” enables us to date this publication to 1918.

The leaflet proclaims that English women trained themselves to be munitions workers so that they were ready when needed in the factories “and that Canada has answered with her thousands of Dependables.” Women were also helping with work on the land: “Last summer saw the beginning of a land army of women in Canada” and the numbers are predicted to increase in the coming summer. “The world with difficulty accustomed itself to the thought of women facing real danger and doing arduous work”. No occupation, including quarrying and mining, can be considered closed to women: “every one knows that the Canadian woman is a real Dependable!”

Munitions work and service on the land are themes which continue in the next leaflet headed “Support and Substitution.” (#37499 + p2). In order to provide essential reinforcements in the trenches, men must be “released from civilian life” and “our boys” must have “a practically unlimited supply of ammunition.” Canadian women have proved themselves in munitions and the “farmerettes” have demonstrated their abilities. Women who cannot serve in either capacity can provide their talents to release other women from cooking or childcare and even city women have a role to play. All will benefit from the work of substitution; the leaflet even makes the claim that “the escape from work that may have become monotonous or even distasteful … will be, it itself, a real rest and recreation.”

The last two leaflets are both headed “From Women’s Section, Department of Public Information.” The first (#38463), “As a Child Sees It,” reproduces a letter by a pupil at the Manitoba School for the Deaf, demonstrating how the doctrine of “Substitution, Support, and Carry On” can be carried out even by deaf children. The pupils have been knitting, farming, raising money and sacrificing food for the war effort. The last item in the series (#38464), “Anything New In War Work?” praises the efforts of Canadian women in producing socks “by the millions of pairs” and other comforts during four years of war: “in order that the torch of liberty shall not be extinguished.” The leaflet cites one specific initiative, worthy of emulation: a project developed by the Levana Society at Queen’s University to produce vermin-proof underclothing by dipping the vests in a mixture of naphthalene, sulphur and gasoline.

As these leaflets clearly demonstrate, by 1917-18, the multifaceted and continuing demands of the First World War utterly transformed the notion of “women’s work” in both England and Canada.