Pilgrimages to the sites of First World War battles by veterans and the bereaved began immediately after the war’s conclusion and continued throughout the 1920s and 1930s. McMaster’s small collection, consisting of a telegram, programmes, menus, newspapers, post cards, and a commemorative medal, relates to the inaugural pilgrimage to the Vimy Ridge Memorial in 1936.

In the early years, pilgrims tended to be bereaved family members looking for the graves of their loved ones. This was a consequence of the British decision, made during the war, to not repatriate the dead but rather bury them in military cemeteries near where they fell. The Imperial War Graves Commission (IWGC – renamed the Commonwealth War Graves Commission in 1960) was established in 1917 to mark and maintain the graves of all the members of the British forces overseas, to build memorials to those with no known grave, and to keep records and registers. Canada and the other Dominions agreed to share with Britain the costs of maintaining these cemeteries and memorials in proportion to the numbers of their war dead.

One of a large number of Canadian memorials and cemeteries in France and Flanders, the monument about eight kilometres northeast of Arras in France atop Vimy Ridge is the largest and most significant memorial to Canadian casualties of the First World War. The Canadian National Vimy Memorial functions as a site of remembrance for the battle of Vimy, 9-12 April 1917, which not only marked the single major success in the vast Allied offensive of that year but has also been seen as a defining moment in the emergence of a Canadian national consciousness. Eighty-one thousand Canadian troops successfully stormed the German positions on the ridge in 1917, suffering 13,477 casualties. The monument also serves as the national memorial to missing Canadian soldiers on the Western Front: 11,285 names of Canadians reported as “missing, presumed dead” in France are inscribed onto the walls of the memorial’s base. 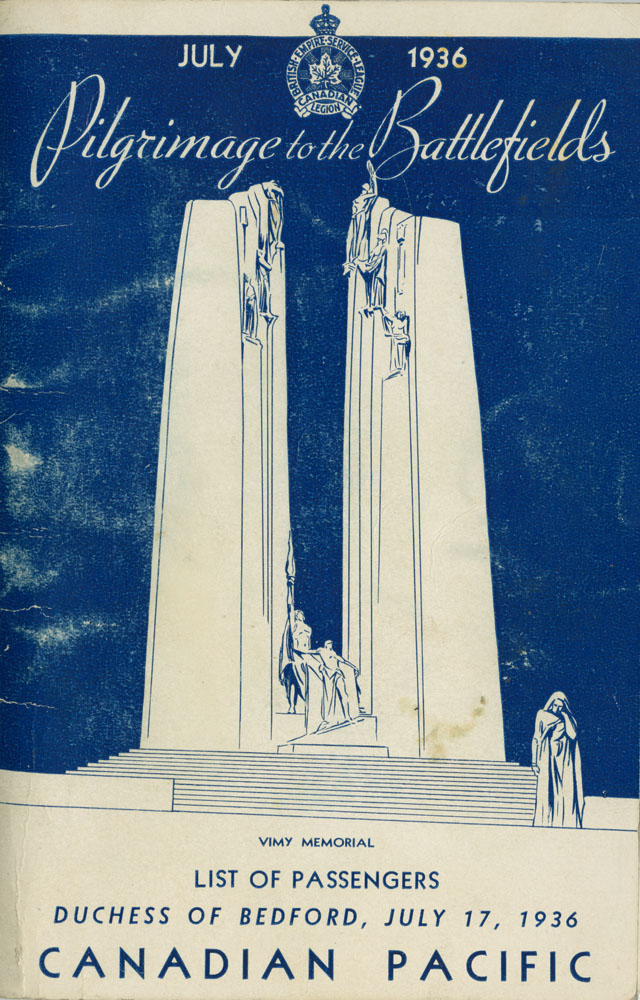 The government of France presented the park surrounding the monument to the people of Canada in 1922, and construction of the massive twin pylon memorial itself began in 1925. Designed by Canadian architect and sculptor, Walter Seymour Allward, more than 11,000 tonnes of concrete and masonry were required for the base of the Memorial and 5,500 tonnes of limestone were brought from Croatia for the pylons and the twenty sculptured figures, which rise twenty-seven metres above the base and 110 metres above the Douai plain. It took eleven years to complete the sculpture, at a cost of approximately $1.5 million, and on 26 July 1936, King Edward VIII unveiled the monument before an enormous assemblage, including 8,000 Canadian pilgrims.

By the early 1930s, organized mass pilgrimages to battle sites and memorials had become more popular than the individual, family visits of the early 1920s, largely because the organized pilgrimages were considerably more affordable than private visits. Visits to the IWGC memorials rose steadily over the course of the 1930s, with the annual number of signatures in visitor’s books rising from 99,000 in 1932 to 157,583 in 1938-39. 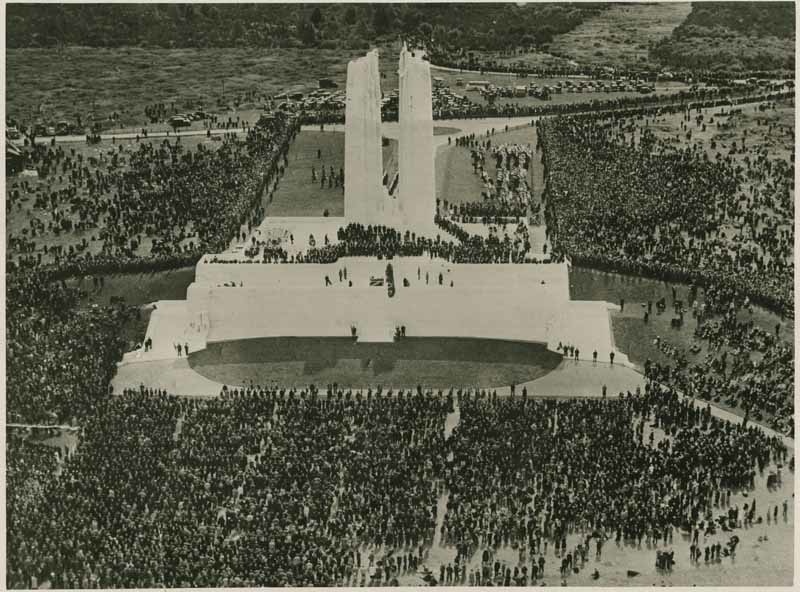 The unveiling and dedication of the Vimy Memorial in 1936 was the largest single Dominion pilgrimage to a war memorial. The Vimy Pilgrimage was first proposed in 1927 and moved in a resolution by the Dominion Convention of the Canadian Legion in St. John in 1928. The onset of the Great Depression and delays in constructing the memorial led to the pilgrimage’s postponement, although it remained an often mentioned aspiration of the Canadian Legion. When it was finally determined that the Vimy memorial would be completed in 1936, plans were made for a mass pilgrimage for its unveiling that July.

Three-quarters of the 8,000 pilgrims embarked from Montreal for Le Havre on six ships in mid July 1936. The remaining 2,000 travelled independently from Britain to Vimy. Major companies, local communities and federal and provincial governments facilitated the pilgrimage by giving special leave of absence to their employees, and in the case of the Hudson’s Bay Company, for instance, giving them leave at full pay. In many communities lotteries were held to help pay passage for local ex-servicemen. As the liners, including The Duchess of Bedford, made their way down the St. Lawrence, crowds lined the shores in small towns, and in Quebec City thousands waited in darkness to see the ships pass.

As the materials in the William Ready Division at McMaster make clear, the unveiling of the memorial on 26 July was the highlight of the pilgrimage, with an estimated 100,000 people in attendance. The unveiling was held in the afternoon rather than at 11:00 am so that the ceremony could be broadcast by radio in Canada in the morning rather than during the night. Thousands were reported to have listened in. After the dedication, pilgrims were feted by both the French and British governments; the French government entertained some 4,300 as their guests for six days; the British government organized a march of Canadian ex-servicemen through London and a garden party at Buckingham Palace.

This, and the other ex-servicemen pilgrimages, fulfilled a number of functions: they served as a ritual to remember lost comrades; trumpeted the achievements of Canadian servicemen, merging the assertion of Canadian nationhood with remembrance of a war that Canada had fought as an imperial cause; and assuaged the loss of the bereaved. At the dedication ceremonies in 1936, in the name of these groups and ideas, the pilgrims also made a desperate call for peace at a time of gathering war clouds.