Working for Peace: Eva Sanderson and the Toronto Association for Peace, 1958-1972

A founding member of the Toronto Association for Peace, for 14 years Eva Sanderson led the group’s struggle for peace, primarily through its concerted efforts against nuclear weapons.

“None of us can resign from our own individual responsibility.” So wrote veteran peace activist Eva Sanderson, expressing the belief that propelled her into work within the Toronto Association for Peace (TAP). Founded in 1958, TAP was the local body, which planned and carried out activities in association with the Canadian Peace Congress. President from 1958 to 1972, Sanderson directed TAP’s efforts which focused on educating the public about threats to peace and motivating them to work for the cause. While TAP identified many threats to peace: nuclear weapons, American intervention and Canadian complicity in Vietnam, German rearmament, the failure to recognize the People’s Republic of China, and apartheid in South Africa, it was the first two which received the most attention. 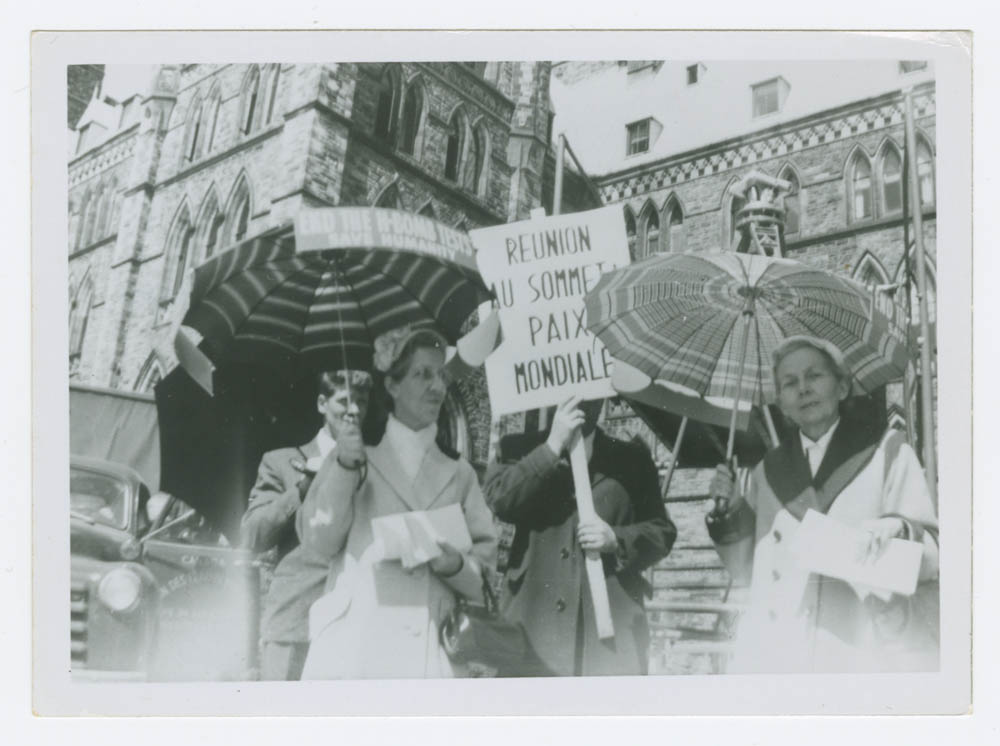 To alert Canadians about the dangers of nuclear weapons, TAP employed two powerful tools: protest marches, and the submission of briefs to politicians. Led by Sanderson, members of TAP converged on Parliament Hill in Ottawa annually between 1958 and 1961, each time highlighting a key issue. In 1958, for example, they carried umbrellas bearing slogans urging “SPEEDY ACTION to end the deadly tests and the menace of nuclear arms.” In 1959, they focused on the dangers of nuclear testing. Presenting themselves as concerned parents and grandparents, TAP protesters carried placards, which proclaimed the danger to children’s health represented by strontium 90, an element found in the fallout produced by atmospheric nuclear testing. 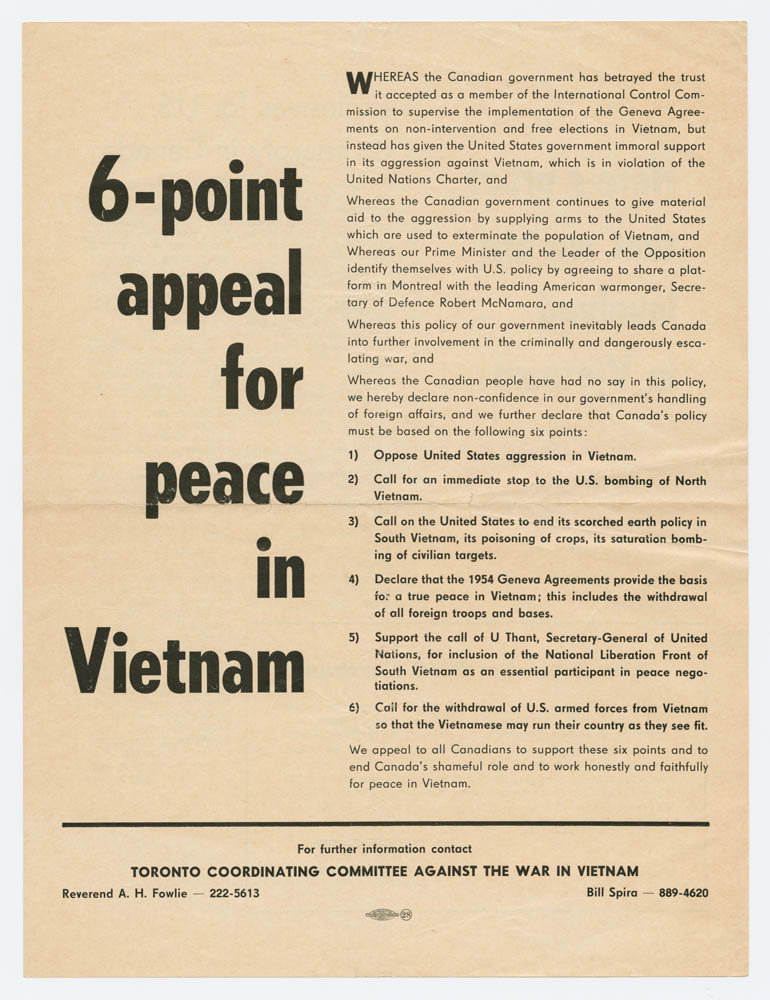 As TAP’s President, Sanderson submitted briefs to the Prime Minister to advocate for nuclear disarmament. Knowing that strategists viewed nuclear weapons as a deterrent that ensured Canada’s security, she argued in a May 1961 brief to Mr. Diefenbaker that true security rested on moral forces and mutual trust. Equally problematic, nuclear weapons siphoned money away from those Canadians who needed it most. Money spent on nuclear deterrence, Sanderson wrote in a February 1960 brief, should be devoted instead to improving the standard of living of the neediest by raising the exemption from income tax, increasing pensions and other payments, and launching large-scale public works.

From 1962, while continuing to advocate for nuclear disarmament, Sanderson led TAP in opposing American involvement and Canadian complicity in the Vietnam War. In this, she used strategies that experience had already proven effective. For example, on behalf of TAP, she wrote to American and Canadian politicians, demanding an end to the fighting. Disseminating information about the conduct of the war, Sanderson implored Canadians to write similar letters. Forming coalitions with other peace groups, TAP joined in protest marches to rouse public opinion against the war.

After suffering a debilitating stroke in 1972, Eva Sanderson was no longer able to serve as TAP’s president. However, the organization continued its work under the leadership of Hans Blumenfeld. Under Sanderson’s direction for fourteen years, TAP was made part of a world-wide movement for peace. While this international movement has attracted significant academic and popular attention, the Canadian component has been neglected and the work of its leaders, particularly women like Eva Sanderson, has been similarly under-recognized. But, as the records of the William Ready Division of Archives and Research Collections demonstrate, there is ample material available which documents the Canadian chapter.

Toronto Co-ordinating Committee to End the War in Vietnam, Leaflet, 7 May [1966]