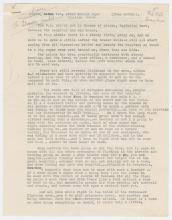 [Transcription of a letter describing events and her frustration during intense fighting in Quang Ngai area in early February 1968. The handwritten additions were apparently added later by Culhane.]
From Claire, tet, after couple days (from letter). [handwritten]: 4 Feb.1968. Quang Ngai
[handwritten] To Eloise Hartel
the v.c. struck out in dozens of places, including here, between the hospital and our house.
at this minute there is a steady firing going on, and as soon as it gets a little darker the tracer bullets will all start coming from all directions behind and beside the hospital as there is a big sugar cane area behind us, where they can hide.
the prison has been practically destroyed with steady bombing, and the local vn [Vietnamese] post office, a warehouse, and a school in town, also directly behind the prov[incial] hospital where our old tb [tuberculosis] ward was.
there are still several divisions in the area, within 4-5 kilometers and more activity is expected again tonight. havent a clue when it will be safe again to get up to the compound to mail this, or when another plane might come to take mail out or in.
the roads are full of refugees streaming in, people carrying the wounded in litters, and here at the hospital the dr refuses to take them in because we are only t.b. - as tho
we’re not in the middle of the worst war in the world. so it’s a constant battle and getting worse by the minute on all scores – like whether or not I’m to drive a patient with her family to their home for burial yesterday…or home on the stretche[r] and our interpreter to walk back…. so i drove the jeep right on to the next hamlet..as if their grief wasn’t bad enough without seeing such a spectacle...or whether or not I am going to stay with the patients at night, half of whom spend the night cowering under the beds because of the window-shaking bombing going on..or whether or not we take in a burned victim, who happened to be uncle of one of our employees, who was hiding in a cave with wife and 10 children, and is the only one left alive…and I have to fight with him [i.e. hospital director] not to send him back – where? to what home? to whom.
this pattern has been going on all the time, but in past 48 hours with all the extra pressures of fighting in the streets and bombing going on about 2 city blocks away from us, you can imagine…today [I] finally took off myself and helped out at the prov[incial] Hospital, ashamed that we are not helping out as a team, nor even taking any into our hospital…situation is desperate,
i honestly don’t know how to cope with such a bastard --- if i even allow a woman with a dying baby into the house to be seen with him (which of course dr vennema did all the time) he pulls a sour face and sits there like a fool without a clue of what to do, but meanwhile spends his time reading art buchwald and novels, and haven’t seen him open a medical book yet.
And all this while right in the thick of the rottenest fighting ever…saw 2 vc [Viet Cong] girl prisoners today, and another one being searched down the road—everyone silent. at least if I knew we were doing everything we could, it would help a little, …