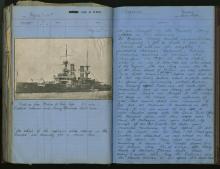 May 24th cont – The gun brought by the “Fauvette” being place in BI casemate.
Distance from Mudros to Gaba Tepe 63 miles
Distance steamed since leaving Sheerness 18,408 miles.
May 25th – At Mudros. Having coaled, ammunitioned, provisioned, & got a fresh 6” gun on board, at 4.30 am we weighed & proceeded towards Gallipoli, having received orders to relieve the “Canopus” as SNO at Gaba Tepe. Whilst on our way to Gaba Tepe and when abreast of the “Majestic”, who was lying under the lee of the land abreast of Krithea, we were attacked by an hostile submarine at 10.20 am. A torpedo was fired at us but very luckily passed about 20 yards astern. XI opened fire immediately without, however, any damaging effect. Doors and all water tight compartments were at once closed, all upper deck guns were loaded and brought to the ready, all ships in the vicinity were informed of what had occurred, speed was increased to “Full” and we continued to maneuver in the vicinity. At 11.50 we arrived off Gaba Tepe to relieve “Canopus”, shortly after the Senior Naval Officer, the transport officer, with their staffs came on board, the submarine was again sighted, by aircraft, off our Port Quarter. All ships again commenced maneuvering at high speed. At 12.20 pm the “Triumph” was hit twice*. All Destroyers, Trawlers, and steamboats at once closed on her at top speed, the larger ships continued maneuvering to seaward. The “Triumph” opened fire and continued firing till, at 12.26 pm, after listing heavily to starboard she turned turtle, finally sinking 8 minutes after being hit. Destroyers were also observed steaming at full speed from Saddul Bahr
* The shock of the explosion which occurred in the “Triumph” was distinctly felt on board here.