“Everybody from Grandma to the little tot in the schoolroom ...”: The City of Hamilton during World War I

As one of Canada’s largest manufacturing and transportation centres, Hamilton, Ontario, a major Great Lakes port close to the U.S. border, played a crucial role during the two world wars. During the 1914-18 conflict, as well as training troops for land, sea, and air, Hamilton was lauded for industrial productivity and the extraordinary achievement of its citizens in raising funds.

Located at the western end of Lake Ontario, Hamilton’s port and connections to major roads and railway lines from across Canada and the nearby United States provided ideal facilities for wartime production and the transportation of goods and soldiers. At the beginning of World War I, Hamilton’s population was just over 100,000, many of whom were employed in the city’s manufacturing plants, including its steel mills, Stelco and Dofasco, and the newly-opened Procter & Gamble. 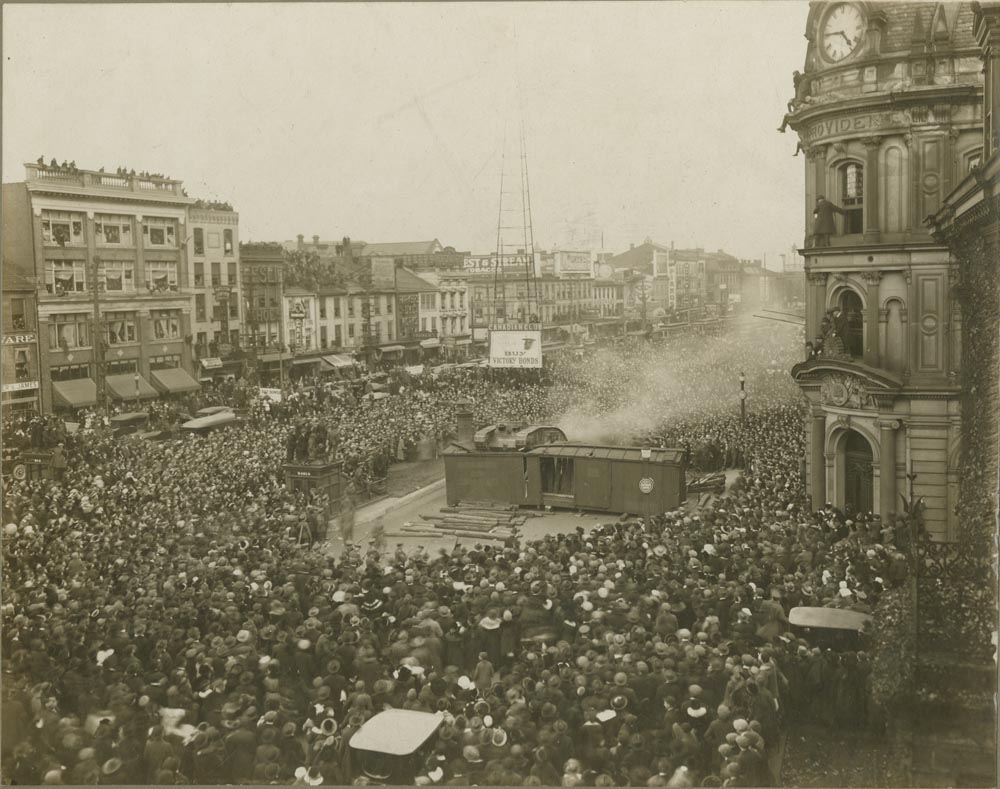 Hamiltonians had played significant roles in military activities dating back to the War of 1812, so it was not surprising that by 4 October 1915 over 10,000 Hamilton men had enlisted, a total of 10% of the population, and a record for enlistment in Canada at that time. The city centralized its recruiting drive at the James Street Armouries (built in 1908) later that year, a model later adopted throughout Canada.

Major units in the city included the Argyll and Sutherland Highlanders of Canada, formed in 1903, which provided 145 officers and over 5,000 other ranks for service in the Canadian Expeditionary Forces, particularly for the19th Batallion that saw action at Flanders, Vimy Ridge, Passchendaele and other European sites. Its sister unit, the Royal Hamilton Light Infantry, which first fought in the 1866 Battle of Ridgeway during the Fenian raids on Canada, also fought in Europe and would become immortalized for its sacrifices at Dieppe in World War II.

A unit originally referred to as the 40th Sportsmen’s Battery was recruited late in 1915 and attached to the 40th Field Battery under the command of Major Gordon Hamilton Southam, of Hamilton. Its men left for training at the nearby Niagara-on-the-Lake camp in September of that year. Overseas the 40th became part of the 8th and then 10th Brigades of the CFA. The war diary for the 8th Brigade records the death of Major Southam, who perished while supervising the movement of his men into trenches at the Somme in October 1916. 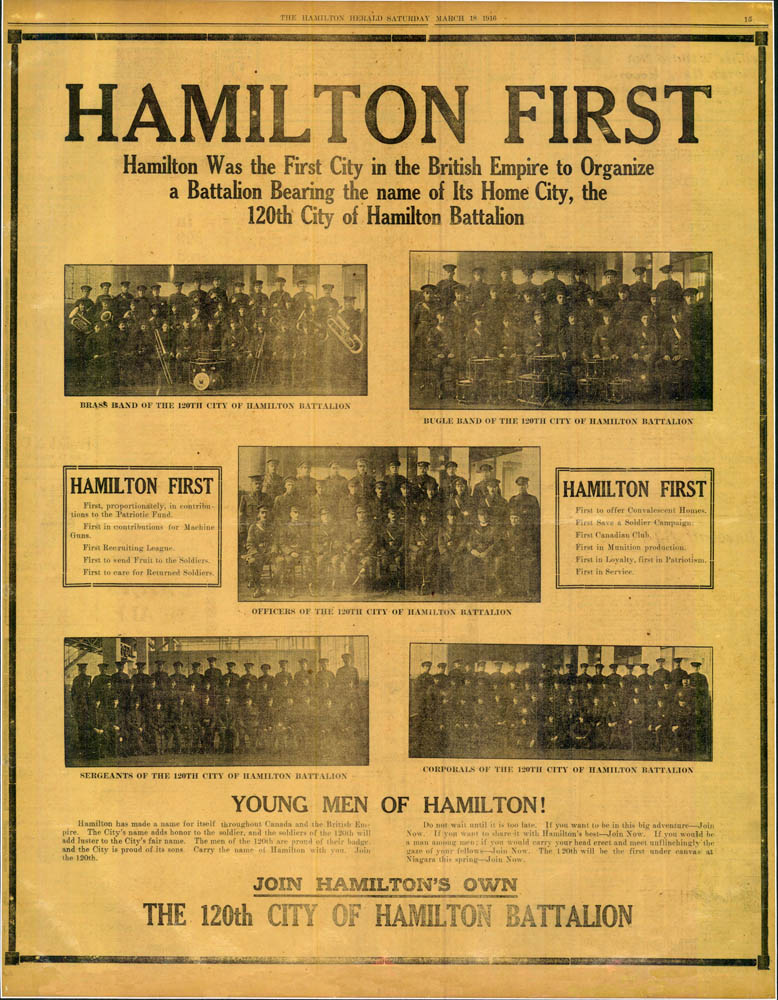 In establishing the 120th City of Hamilton Battalion, the city became the first in the British Empire to create a battalion bearing its host city’s name. The battalion's recruitment poster which appeared in The Hamilton Herald appealed to men’s sense of adventure, the prospect of associating with the city’s finest, and the prospect of shame if one did not enlist: “Do not wait until it is too late. If you want to be in this big adventure – Join Now. If you want to share it with Hamilton’s best – Join Now. If you would be a man among men; if you would carry your head erect and meet unflinchingly the gaze of your fellows – Join Now.”

In addition to recruitment, the city was the site of various training facilities, including two for airmen operated by the British: an armament school in Hamilton, and a school of aerial fighting and artillery cooperation at nearby Beamsville.

Those who did not, or could not enlist, rallied to support the war effort in myriad ways. The Home Guard was formed in September 1914 and grew to 1,000 men by its first anniversary. Dire conditions in the trenches necessitated a constant supply of socks for the troops, so knitting became a city-wide endeavour. Many patriotic societies took up this task, including Marion S. Simpson’s Associated Field Comforts. The Hamilton Spectator noted: “everybody from Grandma to the little tot in the school classroom [is] plying the clicking needles with skill and perseverance.”

Supporting various war funds became a major preoccupation and in spite of difficult conditions, the city raised 1.2 million dollars by 18 December 1915. Various methods were used to encourage contributions. As was the case in Britain poster campaigns were effective, appealing to feelings of patriotism, concern for safety, and outrage at particular events. One poster was particularly meaningful for local residents, as it evoked the tragic death of Hamilton nurse Mae Bell Sampson, who perished along with other nursing sisters in a torpedo attack on a hospital ship in 1918 in what was described as one of the worst atrocities of the war.

Along with posters, demonstrations of military might were used to great effect in the fundraising efforts. The British tank ‘Britannia’ which had fought at the Somme, was brought to Canada to assist with the bond drives by staging a dramatic tank parade in the city’s core on 2 November 1918. Streets were lined with thousands of men, women and children, eager to catch a glimpse of what a newspaper described as the “grim-looking warrior”. To great effect and no doubt tremendous cheers from the crowd, the tank demolished a huge boxcar while flyers from the nearby Beamsville aviation camp presented an aerial display.

In announcing the December 1918 fundraising total, the Hamilton Spectator noted with pride that donors included not only those from wealthy families, but also “the workingmen, the women, the girls and the boys in mills and factories whose weekly pay-envelopes are woefully thin”, along with children who sold flags and buttons and held bazaars to help.

Hamiltonians had rallied to the cause. Their experience in the Great War prepared them for what was to come in 1939.

The author thanks Margaret Houghton for her significant contributions to the research for this case study.
Houghton, Margaret. Hamilton at War : on the home front (Burlington, ON: North Shore Publishing, 2005)