“The Hound of Conscience”: The No-Conscription Fellowship

Widespread popular protest against war did not emerge for the first time in the 1960s. Active opposition to the First World War was mobilized in England by the No-Conscription Fellowship. Bertrand Russell’s involvement with the group cost him first his furniture and then his freedom.

Early opposition to the First World War in England was scattered and ineffective – the various opponents had no time to get co-ordinated because of the speed with which the war was declared. The British Neutrality League led by Norman Angell, the British Neutrality Committee, the Labour Party, and others all dissented but to no avail. At first the war was greeted with great enthusiasm by the majority of citizens – and once the initial rush to enlist slowed, the Parliamentary Recruiting Committee was at the ready. Its job was to either entice or shame Britain’s men into joining up.

Predictably, enlistment numbers fell off as the slaughter taking place on the battlefields increased. Bringing in conscription, however, was far from an easy matter. It was opposed by some Liberal Members of Parliament, members of the Labour Party, religious pacifists, the Union of Democratic Control and the Independent Labour Party. It was from the latter group that the leadership of the No-Conscription Fellowship (NCF) sprang. Led by Fenner Brockway, Clifford Allen and C.H. Norman, this group anticipated that conscription (forcible draft into the army) might eventually become government policy. In December 1914 they announced the formation of the NCF in the press and started seeking members. Knowing it would be labelled as a group of shirkers and cowards, the NFC presented its mission as the protection of the sanctity of human life. Members “consider human life to be sacred and cannot, therefore, assume the responsibility of inflicting death. They deny the right of governments to say ‘you shall bear arms’”. (Thomas C. Kennedy, p. 51) This rather hastily adopted “mission statement” would lead to later troubles within the organization between the absolutists, who would not serve the cause of war under any conditions, including non-combatant roles, and those who were willing to compromise by performing tasks which did not include the possibility of taking life. 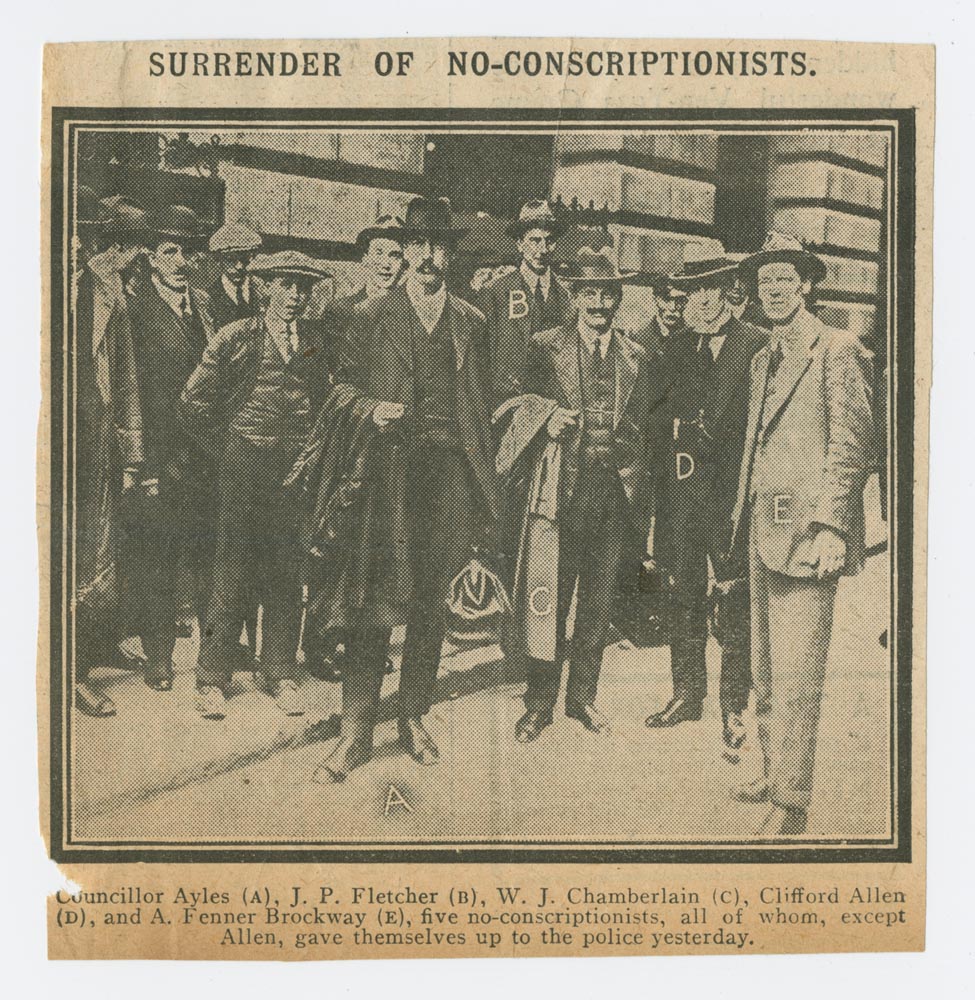 An Act authorizing conscription for single men between the ages of 18 and 41was passed in January 1916. Within a few months it was amended to also include married men. By 9 June, over twelve hundred men had been arrested for refusing to serve and were undergoing various forms of punishment. A system of tribunals was set up before which conscientious objectors could appear. The NCF assisted men appearing before the tribunals. The Local Tribunal Minute Book of the Urban District of Diss chronicles many such proceedings. In a typical day, the tribunal could process as many as twenty-seven cases, during which objectors were either granted conditional or temporary exemption, or denied exemption from military service. Conditions for exemption included remaining in one’s present occupation or joining an ambulance unit.

The NCF published information leaflets and a newsletter called The Tribunal. It never stopped trying to get the conscription legislation repealed. The political arm of the NCF, headed by Catherine Marshall, consisted of a committee of associate members: women, and older and married men. Bertrand Russell became a member in April 1916 and devoted much of his time to the NCF. He wrote and lectured, delivering a powerful anti-war, anti-conscription message, as well as attending courts martial and meeting with those feeling threatened by the authorities. Unlike some NCF members, Russell did not believe that war could never be justified. However, he was opposed to this war from the very beginning –– his earliest antiwar involvement had been with the Union of Democratic Control. 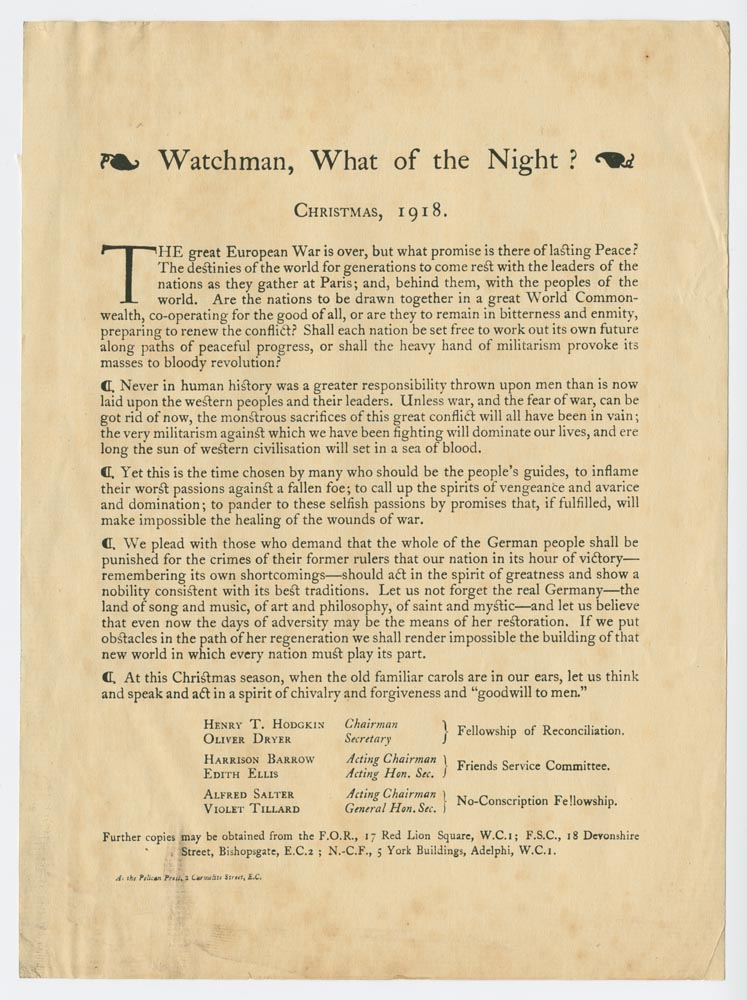 On 30 May 1916 Russell was charged with making “statements likely to prejudice the recruiting and discipline of His Majesty’s forces”. On 5 June he was found guilty and fined. Because of his refusal to pay the fine, his belongings in his rooms at Trinity College, Cambridge, were seized. His friends banded together to buy some of them at auction. Refused a passport to travel to the United States in June, dismissed from his post at Trinity, by September 1916 he was banned from all “prohibited areas” in Britain. The practical effect of this was to prevent him speaking in Glasgow, Edinburgh, and Newcastle – in fact anywhere near the British coasts.

Russell helped to hold the NCF together as the original leaders, such as Clifford Allen, were sent to prison. They were treated very harshly and their health was damaged. By January 1917 Russell became the acting chair of the organization. He worked tirelessly during 1917 but by the end of the year decided that he had to withdraw from the daily grind and return to philosophy. By then the government had acted to disenfranchise all conscientious objectors. In early January 1918 he published one last article for The Tribunal that proved to be his undoing. It included a remark about the possibility that the American Army would occupy England and might be used as strike-breakers. In February he was found guilty of making “statements likely to prejudice His Majesty’s relations with the United States of America”, and sentenced to six months imprisonment. He entered Brixton Prison on 1 May 1918, fortunately in the First Division where conditions were immeasurably better than in the Second Division, where his colleagues had been sent. His health was not impaired and he was able to continue to write. He emerged from prison in September 1918; by November the war was over.

In his study of the No-Conscription Fellowship, The Hound of Conscience, Thomas C. Kennedy sums up the group’s heroic efforts: “The NCF succeeded not only in providing thousands of young war resisters with aid, comfort, and camaraderie but also in severely testing the limits of dissent in a liberal society at war. There was no equivalent organization in any other belligerent country from 1914 to 1918, and there has been none since.” (pp. 52-3)

The NCF, jointly with the Fellowship of Reconciliation and the Friends Service Committee, issued a Christmas message in 1918. The title, “Watchman, What of the Night?”, is taken from the book of Isaiah, in the Old Testament of the Bible. The leaflet called for forgiveness and good will. It warned against harsh treatment of a defeated Germany and advocated the end of war. It added, prophetically, that unless a positive path was found in the future, “the very militarism against which we have been fighting will dominate our lives, and ere long the sun of western civilisation will be set in a sea of blood.”