Ignored by Canadian publishers most of his life, poet Bliss Carman's career is a case study in the vicissitudes of North American literary publishing in the late-nineteenth and early-twentieth centuries, and the need to leave Canada in order to pursue such a life.

Bliss Carman (1861-1929) was among the first poets to gain a significant national reputation following Canadian Confederation. Of the group, Carman had the surest lyric touch and achieved the widest international recognition. But unlike others, he never attempted to secure his income by novel writing, popular journalism, or non-literary employment. He remained a poet, supplementing his art with critical commentaries on literary ideas, philosophy, and aesthetics. His interests drew him to the United States and into the fragile world of literary publishing: “Boston is one of the few 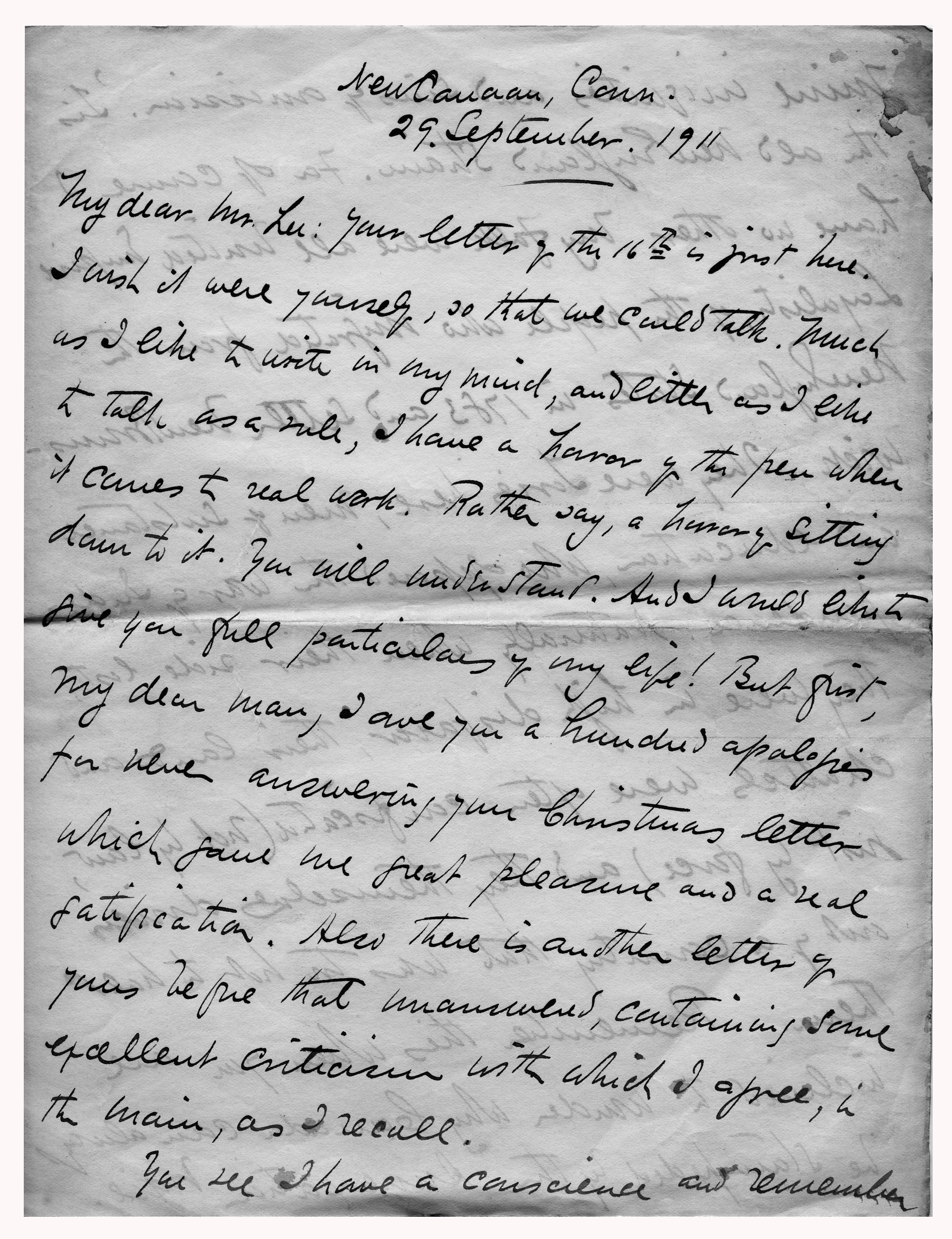 places where my critical education and tastes could be of any use to me in earning money. New York and London are about the only other places.” Yet, despite an active publishing career, he said he had lived with “nothing but debts” all his life.

He went to Boston in 1886 as a Harvard graduate student, and his poem “Low Tide on Grand Pre” in the Atlantic Monthly (Spring 1887) brought him to the attention of American literary publishers. However, without employment in Boston, by 1890 he ended up in New York, working as literary 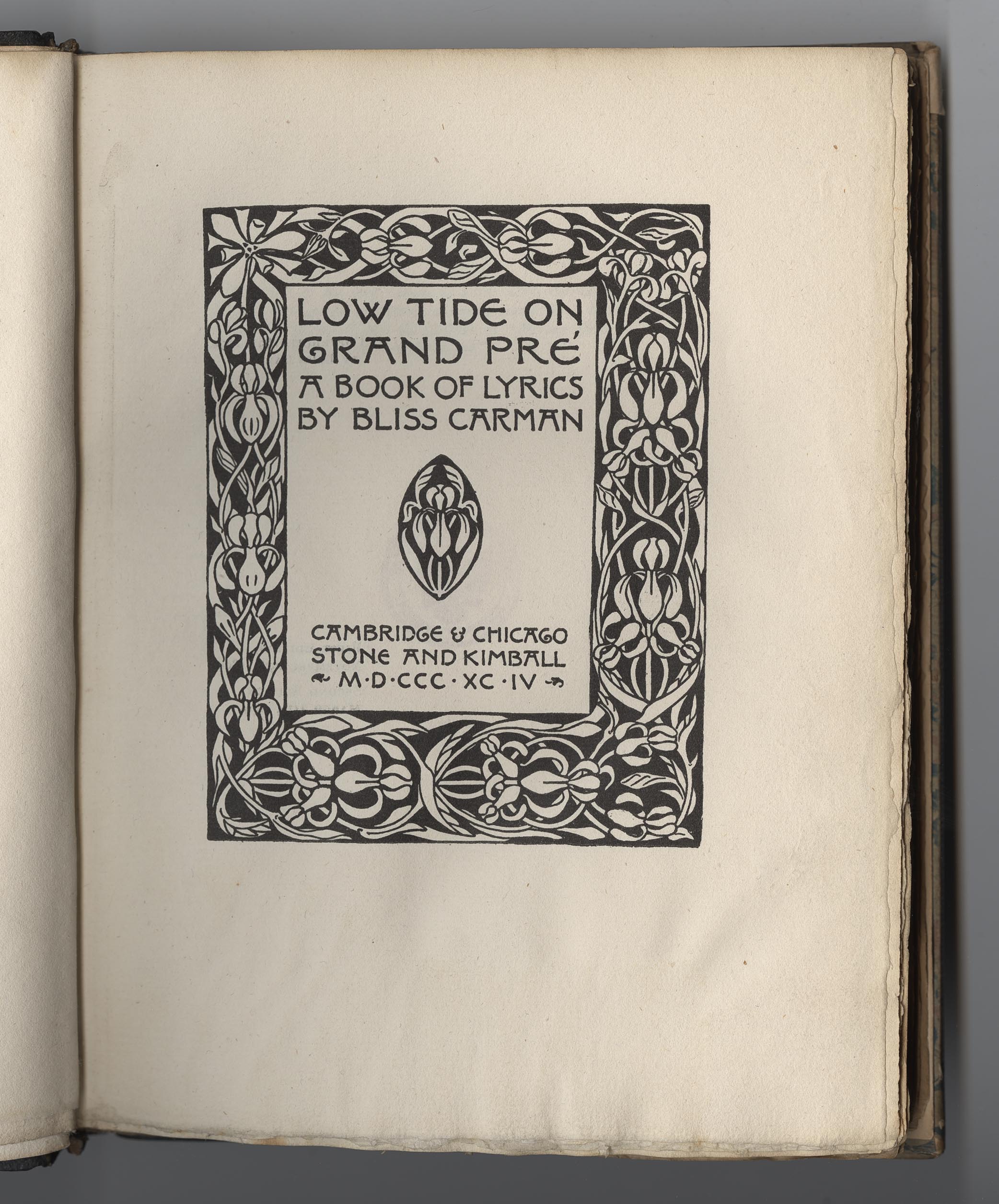 editor at the New York Independent for a paltry $20 a week. Neither his poems nor his literary journalism earned much, so by 1893 he was pursuing two poetry book projects in hopes of adding royalties to his income. His experiences demonstrate the often thankless nature of literary publishing. His first book, Low Tide on Grand Pre, was published (late 1893) in New York by Charles Webster and Company. The company seemed uninterested in Canadian sales after Toronto publisher William Briggs declined a Canadian edition, and American distribution was stalled by Webster's bankruptcy in mid-1894. About the same time, Carman and his friend Richard Hovey jointly published Songs from Vagabondia in Boston through Copeland & Day to very good notices. This success was amplified when a new Boston company, Stone & Kimball, acquired the rights to Low Tide, brought out a second edition (1894), and offered Carman the editorship of their literary journal, The Chapbook. 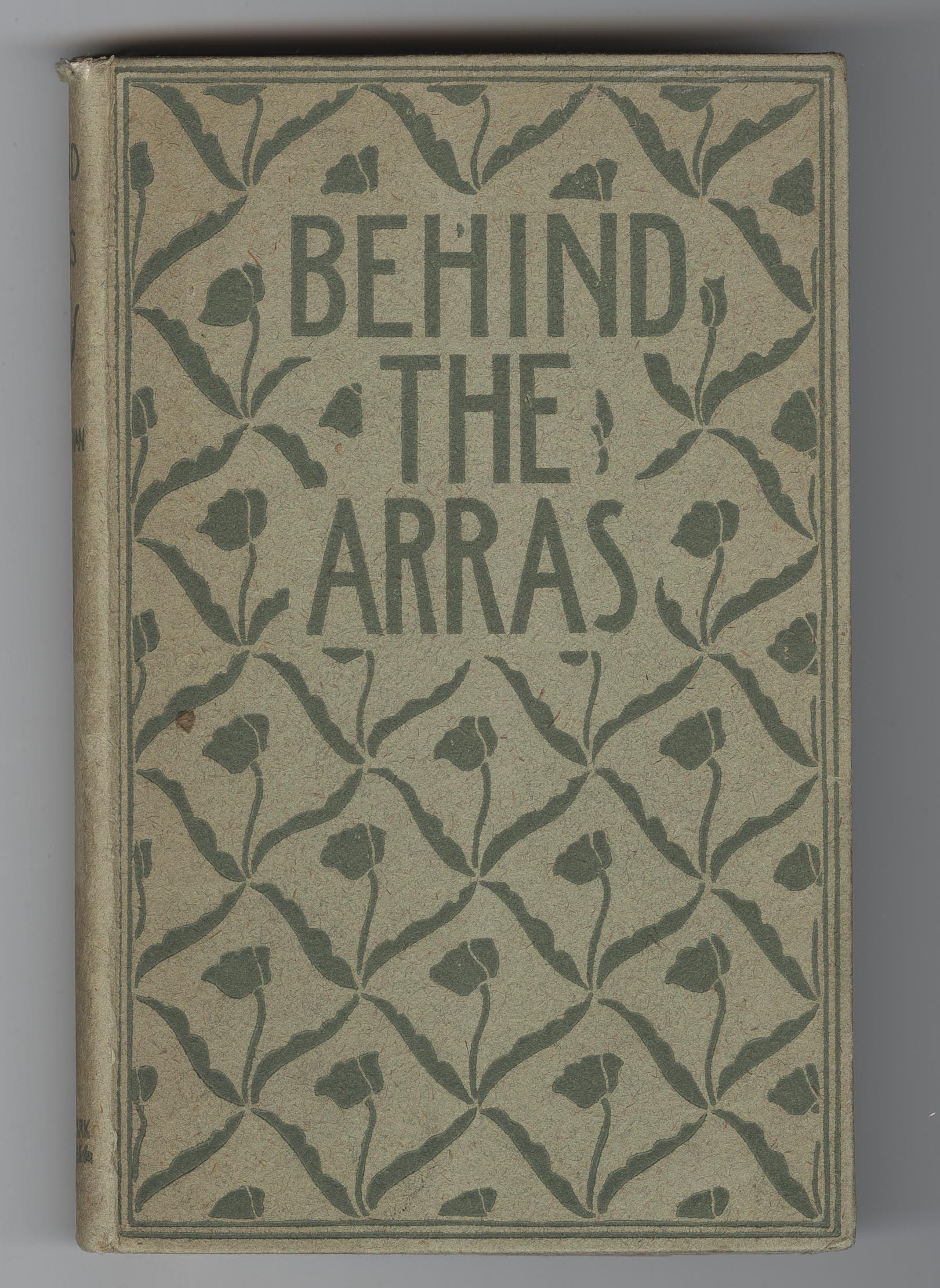 Carman was getting published but his earnings were meager, and when Stone & Kimball moved their business to Chicago, Carman declined to follow. In Boston in 1895, he worked on a new poetry book, Behind the Arras, which he placed with a prominent Boston publisher (Lamson, Wolffe), and, in July 1896, was offered a job writing a weekly column for The Boston Transcript on new ideas and intellectual concerns. For the next few years, his newspaper work provided a small but steady income, and he published two more books of verse with Lamson, Wolffe.

In 1899, Lamson, Wolffe went bankrupt and was taken over by the Boston firm of Small, Maynard & Company, who also acquired Copeland & Day. The rights to all Carman’s books were now held by one publisher and, in lieu of earnings, Carman took a financial stake in the company. When Small, Maynard failed in 1903, Carman lost all his assets. 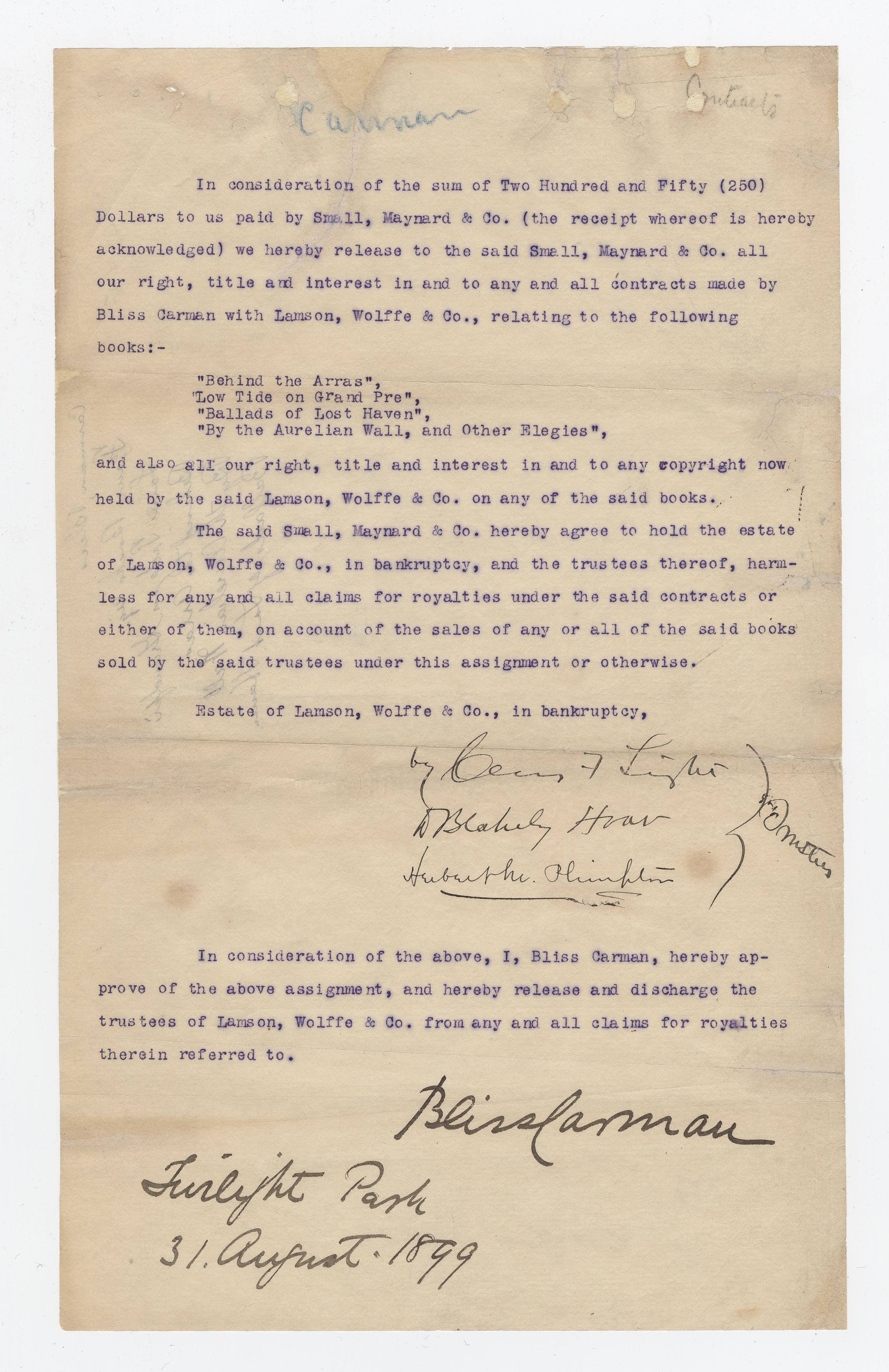 In the meantime, he had been courted by the aggressive (and often difficult) Boston publisher, L.C. Page. From 1902 to 1905, Page published five poetry books and two prose works by Carman. Page also helped Carman rescue his “dream project,” a deluxe edition of his collected poetry to 1903. Begun for Small, Maynard, the project was taken over by Scott, Thaw & Company (Boston), who contracted with a British printer (Cheswick Press) to produce sheets on handmade paper. When the sheets arrived in New York, Customs officials refused to release them, citing copyright concerns. Scott, Thaw promptly went bankrupt, and Page acquired distribution rights with the stipulation that the book be sold privately, by subscription. The project failed; Carman was deeply disappointed and became disenchanted with Page, whose grip on Carman’s copyrights would prevent the publication of another collected edition during Carman’s lifetime. 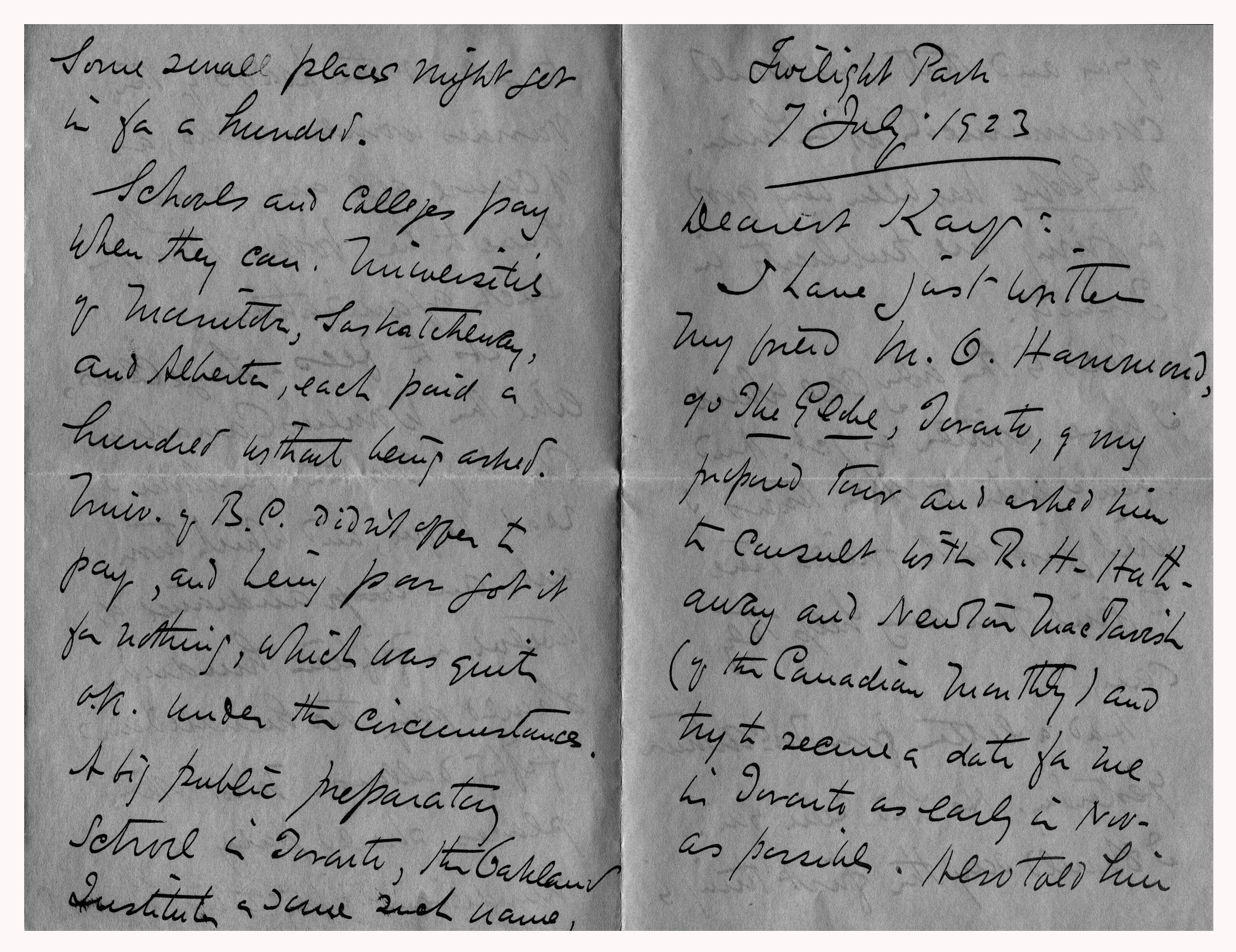 From 1908 to 1920, Carman’s fortunes and health declined, and literary taste began to shift. But in the wake of the First World War, nostalgia for a simpler time generated new interest in his early poetry, and in Canada that interest was heightened by a surge of cultural nationalism. In late 1921, Carman began the first of a series of successful and relatively lucrative reading tours, discovering “there is nothing worth talking of in book sales compared with 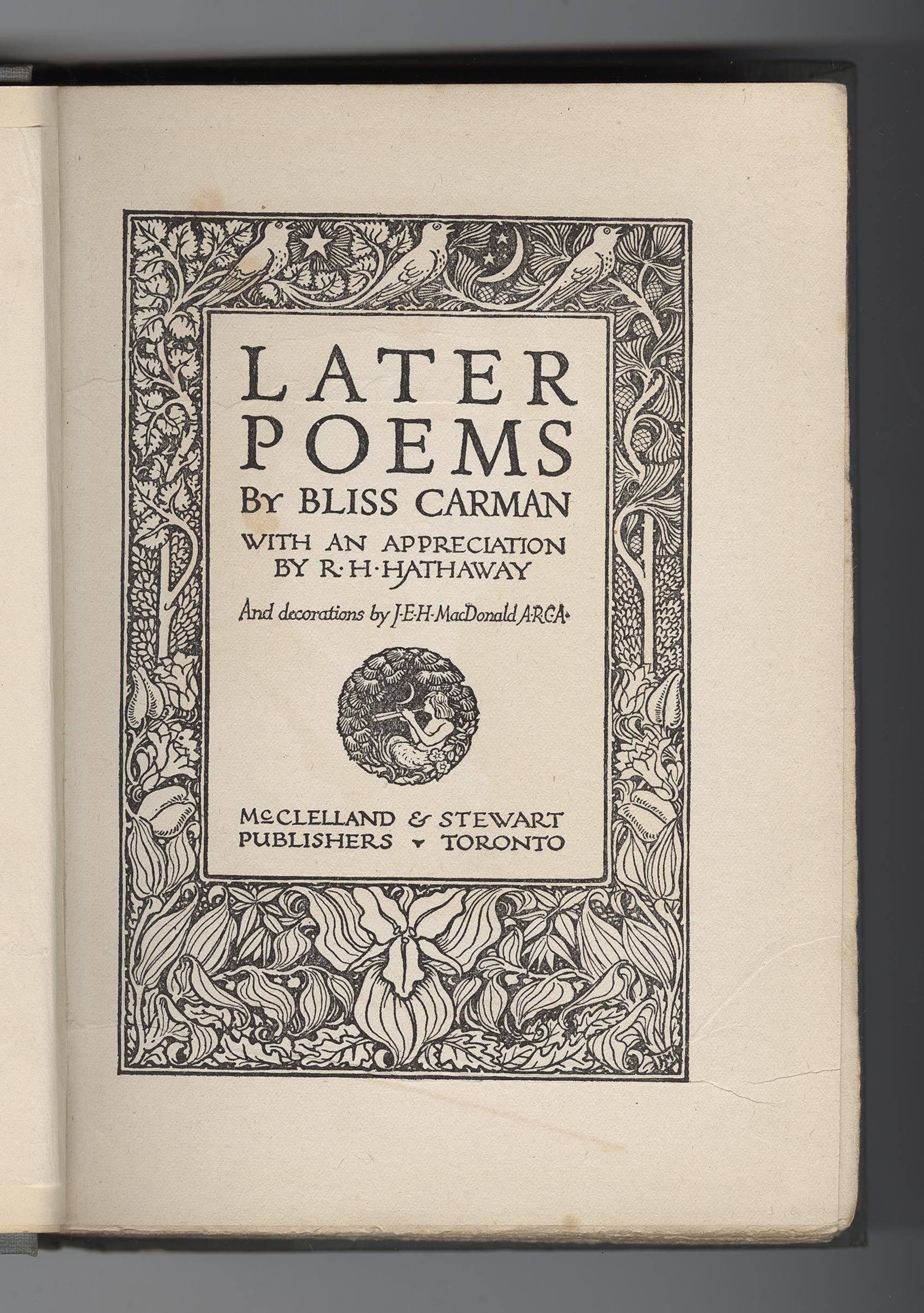 reading.” His popularity also gained him a Canadian publisher: McClelland & Stewart (Toronto) issued a collection of selected earlier verses and became his main publisher. They benefited from Carman's popularity and his revered position in Canadian literature, but no one could convince L.C. Page to relinquish its copyrights. An edition of collected poetry was published only after Carman’s death, due greatly to the persistence of his literary executor, Lorne Pierce.