Brita Mickleburgh (d. 2008) was a trailblazer in teaching Canadian literature in Canadian high schools. Odd as it may seem now, before 1970 she and most of her colleagues “had been teaching English not as a second language, but for all practical purposes as a foreign language”, using texts from Great Britain, Ireland and the United States.

Heights Secondary School in Newmarket where she headed the English Department. She must have felt that existing texts – Prose for Senior Students (Macmillan, 1960) and Our Century in Prose (Macmillan, 1966) – were not adequate for her needs. Both books featured short stories and essays, and although some Canadian authors were included they were not in the majority. Mickleburgh set out to rectify this situation.

“The most interesting classes we had were in Toronto where we met Pierre Berton in his studio, and Robertson Davies and Margaret Laurence at Massey College, University of Toronto.” The course consisted of short stories, poetry, drama and novels. The reading list included: Canadian Short Stories, edited by Robert Weaver (Oxford, 1968) and Fifteen Winds: A Selection of Modern Canadian Poems, edited by Al Purdy (Ryerson, 1969). For novels, students were given a choice from a list of twelve; several titles were from the New Canadian Library series published by McClelland and Stewart (M&S).

The NCL had been launched in January 1958 under the leadership of Jack McClelland (at that time general manager and vice-president of M&S) and Malcolm Ross. As the sixties evolved, Canadian universities began to offer at

least one course in CanLit, and novels issued by the NCL were often used in these courses. But the great untapped market of secondary schools was obviously attractive to M&S which, as Janet B. Friskney notes, experienced financial turmoil in the 1960s and 1970s. Thus the stage was set for a “basic prose book from which students would move out to the novels we have in the NCL”. After meeting Mickleburgh at a seminar, S.J. Totton, vice-president and director of M&S’s educational division, sent McClelland a memo, noting that she was “an able and powerful advocate of Canadian literature in high schools and has had considerable experience in the teaching of it…” Totton was concerned that M&S maintain its educational market share, noting, “the novel market is an uncertain one.”

The road ahead appeared clear but it was not. Although Mickleburgh was busy with teaching and other writing commitments, the book was still on track later in the year. David Walmark, Maritimes regional manager at M&S, met with her in November 1970 and reported: “She will prepare a student text which would include prose extracts, criticism and method. The selections would be chosen to illustrate the regional, topical and historical development of Canadian literature. Throughout there would be ample reference to complete works, e.g. NCL’s [sic], but the intention of this core book would be to instill an interest in Canadian literature for that majority of high school English teachers who had little or no Canadian literature in University and hence are apprehensive of introducing such a course.” He ended his memo with his eye on sales: “Let’s not pussy foot around with this one – our NCL sales could exceed our wildest expectations if she ‘delivers.’”

Walmark discussed the project with M&S colleagues, Mervyn Courtney and Linda McKnight. The group conferred with Grant Huffman, who had edited for M&S Canadiana: an Anthology of Nostalgic, Humorous, and Satirical Writing for Secondary Schools (1970) which included selections from Stephen Leacock Medal winners. He suggested dropping half of Mickleburgh’s proposed prose selections and replacing them with poetry. Further discussions at M&S resulted in the idea of including French-Canadian literature. In early February, McKnight sent Mickleburgh her new marching orders: the text would be half poetry, favour modern writers, and be one-third French Canadian. Mickleburgh wisely ignored these guidelines, and later that year submitted a draft based on the outline in Walmark’s memorandum (although she did add Gabrielle Roy and Marie-Claire Blais). The wisdom of her decision was confirmed by positive internal reader reports by Jay Sonley. McKnight conceded that the text could go ahead without poetry. In April 1972 Malcolm Ross agreed to write an introduction. His correspondence makes it clear that although he liked the authors, he did not like many of the selections, feeling that “the pattern in Canadian writing” did “not come through”. He thus feared that the book might 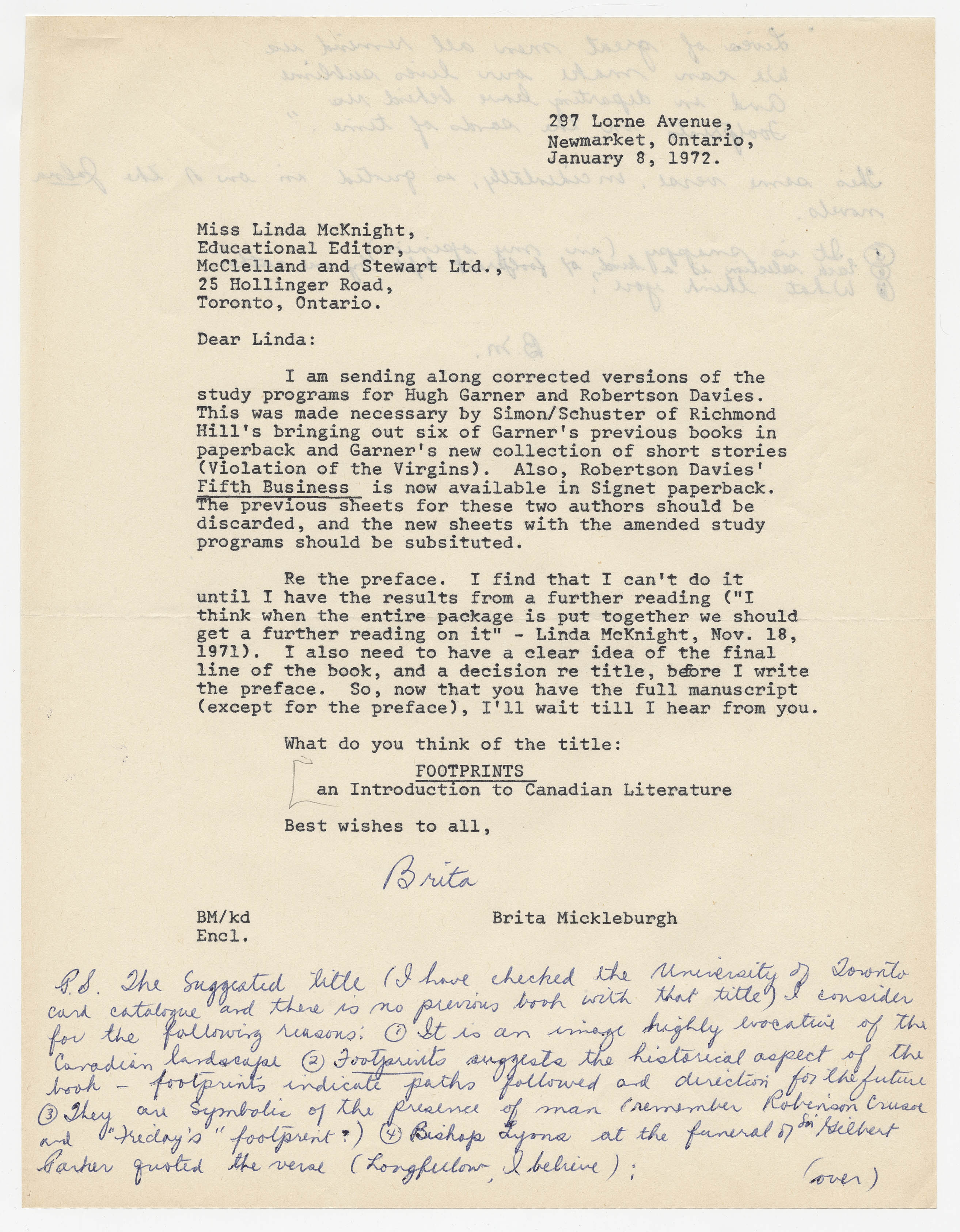 damage NCL sales rather than boost them. Nevertheless he did write the introduction.

Mickleburgh suggested as a title, Footprints: an Introduction of Canadian Literature, reasoning that it presented “an image highly evocative of the Canadian landscape” while at the same time conveying historical aspects of the text, and was “snappy”. M&S did not like her suggestion, and the title Canadian Literature: Two Centuries in Prose was chosen. She noted that the word “prose” was the dullest in the language but was somewhat mollified by the cover design. 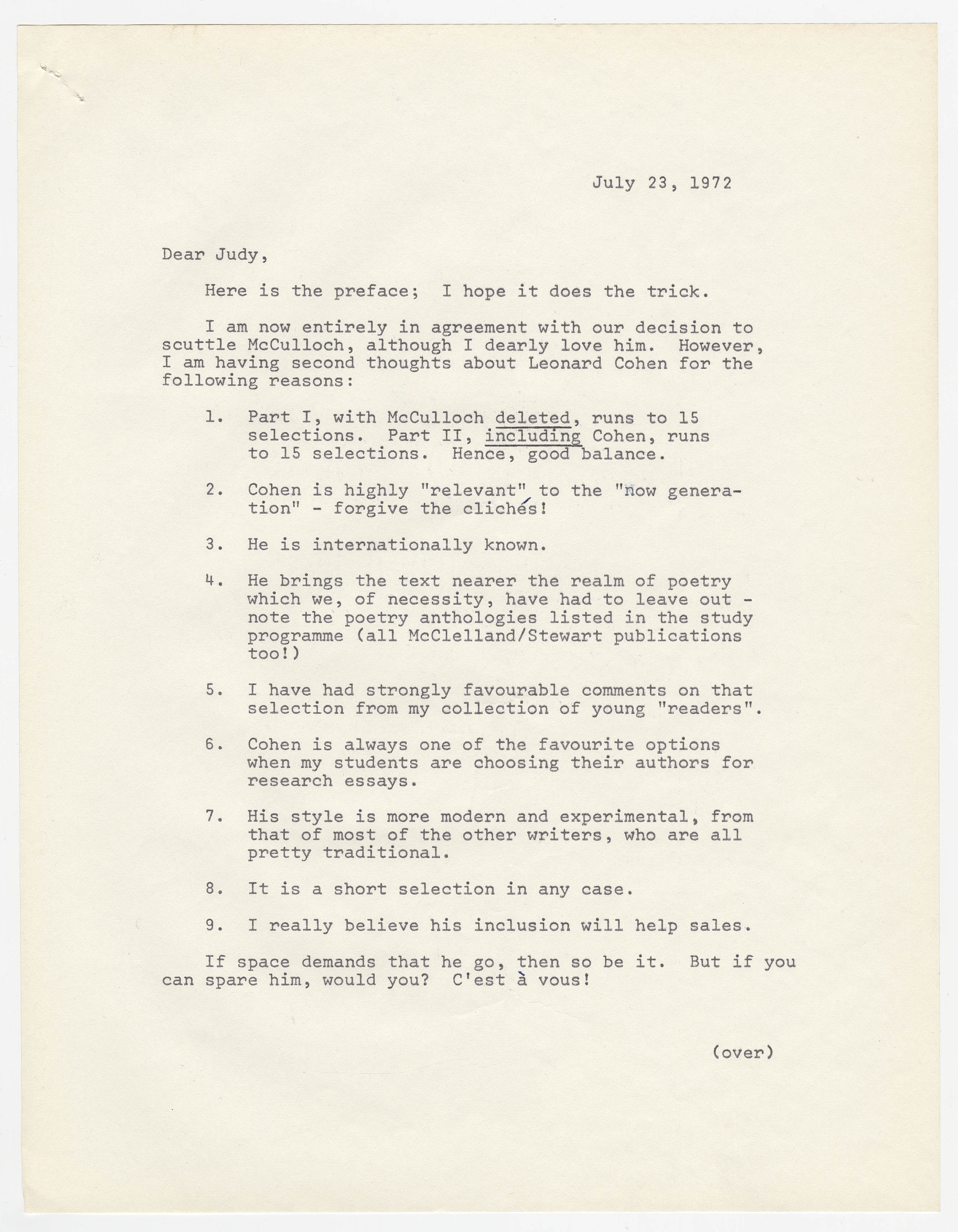 Montague (1769) to Percy Janes’s House of Hate (1970). Mickleburgh had lobbied to retain a Leonard Cohen selection, deeming the poet to be “highly relevant to the now generation.” She was both prescient and right: when cuts had to be made to save space, Thomas McCulloch’s The Stepsure Letters was removed instead.

Publication went ahead in 1973. The initial print run was 7,500 with hopes that sales would go to 15,000. Before the book was even published, welcome news was received that the Ontario Department of Education had agreed to list it for a correspondence course. Although aimed at the higher secondary level, there were also hopes the book could be used in post-secondary institutions. The royalty agreement was for 12 per cent net, with the publisher paying the first $700 in permission fees of an estimated $2,000. Although actual figures are not available, a reprinting in 1984 indicates healthy sales. It is not known how much money Mickleburgh herself made.

The book contained thirty selections; sixteen of which were published by the NCL. Three more were by non-NCL M&S authors and an additional six, although originally published by other firms, were by NCL authors. Only four selections had no connection at all with M&S. Biographical sketches were provided for every author, and critical introductions accompanied some texts. Each selection was followed by “Further Reading” lists which contained many NCL texts. With this close connection to the NCL, it would be interesting to know how or if Mickleburgh’s book affected sales of books in the series, but unfortunately this cannot be directly determined. Janet B. Friskney does notes that NCL sales in 1971 were $275,000 and reached $433,000 by 1978.

That same year, M&S offered a second anthology, Marked by the Wild, edited by Bruce Littlejohn and Jon Pearce, designed as an introduction to Canadian literature with an emphasis on the effect of the environment on Canada’s culture. Also that year, under the general editorship of Mary Jane Edwards, a four-volume anthology, The Evolution of Canadian Literature from 1789 to 1970 was published by Holt, Rinehart and Winston of Canada. It had a much broader mandate than Canadian Literature – poetry and short stories were included. Certainly, Canadian literature was coming of age.

Brita Mickleburgh continued to teach until 1981. She had become head of the English Department at Huron Heights in 1963 at a time when most such posts were occupied by men. Her career focused on making literature, and particularly Canadian literature, available to her students in memorable ways. She died on 27 December 2008.