Canada Reads and the Atwood Archives

Since its inception in 2002, the “Canada Reads” competition has become a major initiative of the Canadian Broadcasting Corporation (CBC). The contest, which pairs five notable Canadians with the Canadian novels that they propose for the prize, has grown in popularity and in media coverage over the years, and has had appreciable effects on sales of the nominated books. This study demonstrates how a document in Margaret Atwood’s archival papers, regarding the 2005 nomination of her book, Oryx and Crake, reveals much about publishing and the media, and particularly illustrates how integrated media enterprises approach book promotion.

Each week during the Canada Reads competition, the spokesperson for each novel “defends” that work on CBC radio, and, in the style of reality television shows, one novel is voted off, leaving one ultimate “Survivor.” The other major influence on the competition is the resurgence of the book club, also in the 1990s, under the direction of American media powerhouse Oprah Winfrey. Winfrey’s book club proved that popular media outlets such as television were not as hostile to print media as had often been supposed by cultural critics, and many media outlets, the CBC included, were productively challenged to devise ways of bringing popular media and fiction into a synergistic relationship. 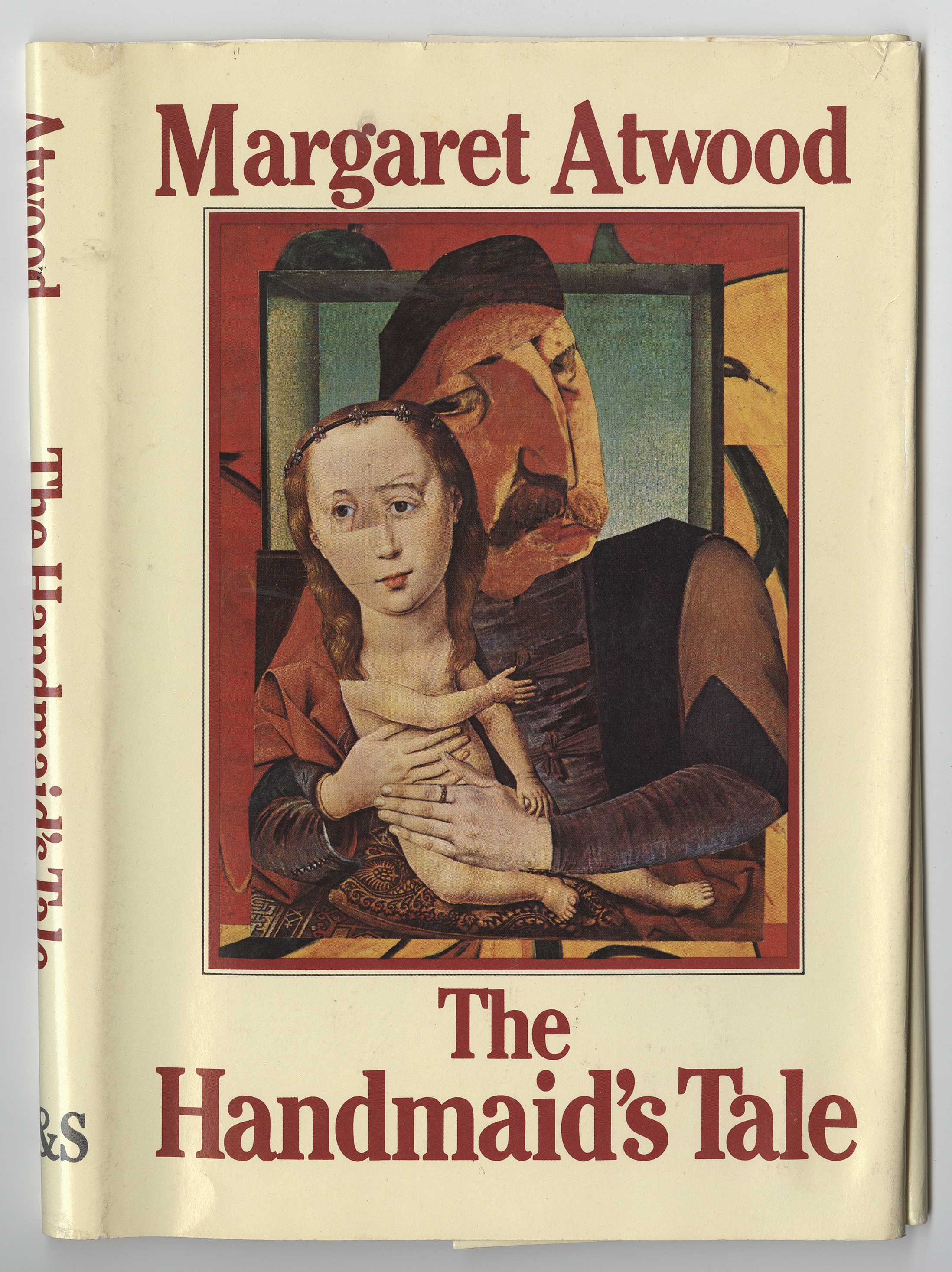 In the premiere year of the contest, Margaret Atwood’s The Handmaid’s Tale was one of five nominees, though it eventually lost out to Michael Ondaatje’s In the Skin of a Lion. In 2005, Atwood was once again a nominee, with her futuristic dystopia Oryx and Crake finding an eloquent defender in Toronto politician Olivia Chow. The Thomas Fisher Rare Book Library at the University of Toronto includes, among its voluminous Atwood papers, a document relating to the 2005 competition that sheds intriguing light on the relationship between public media and publishing in contemporary Canada. Indeed, scholars of literary culture who bring recent cultural theory to their analysis of phenomena such as literary celebrity, book culture, and popular media are well advised to turn to literary archives as a source of inspiration. 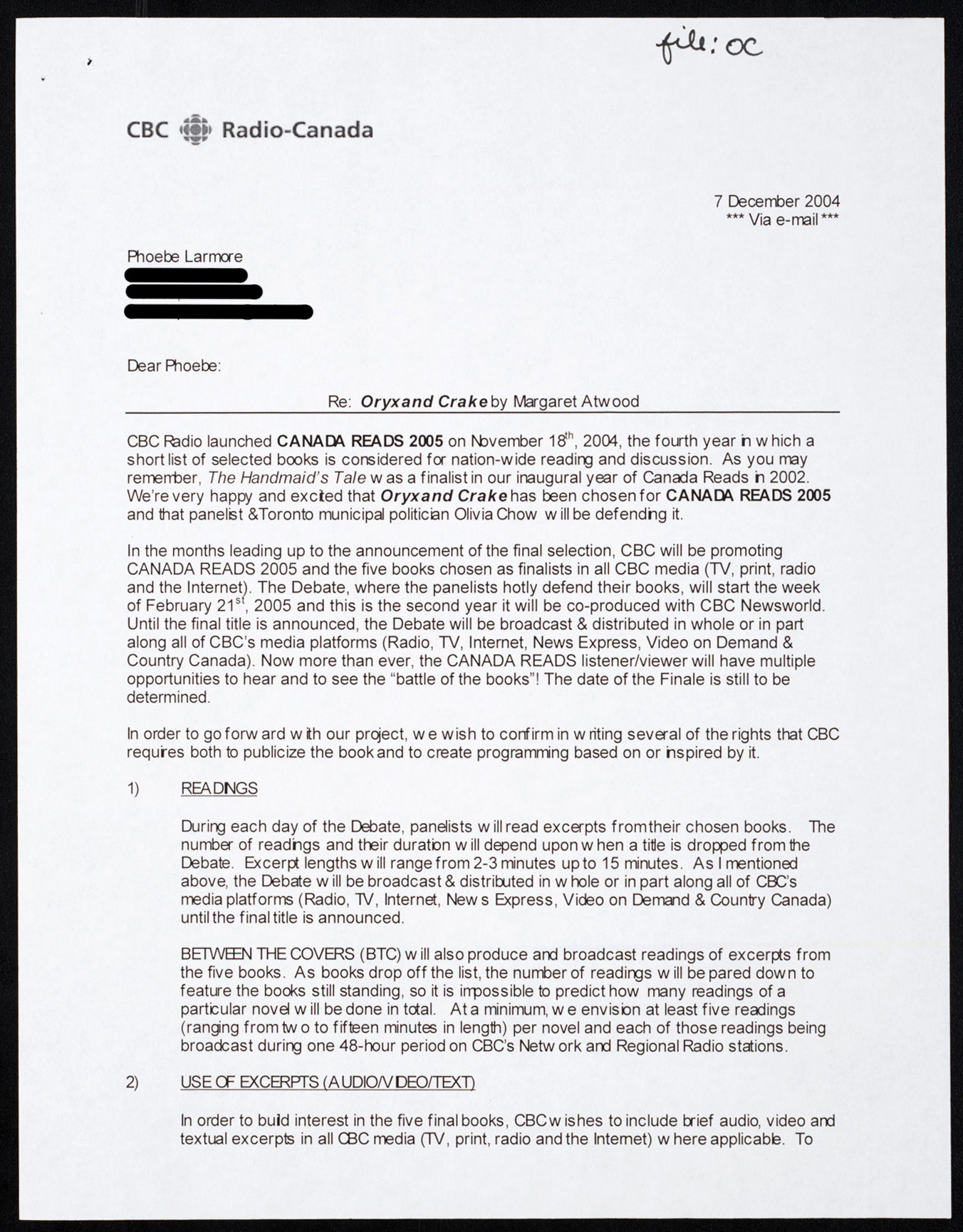 Coordinator of Copyright Research and Licensing, Michelle Dharmalingam, to Atwood’s long-time agent Phoebe Larmore. It is dated 7 December 2004, and in it Dharmalingam requests permission to use excerpts from Atwood’s novel, both in readings that form part of the radio competition, and in the promotion of Canada Reads 2005 in various CBC media “platforms” (to use her industry term): not only radio but television, print, and the internet. She reasons that, since these excerpts will serve to promote not only Canada Reads but also Oryx and Crake, and will presumably result in increased sales of the novel, that permission should be granted for free.

Several noteworthy characteristics of this document stand out for students of literary culture in Canada. For one, it is clear that the Canada Reads competition, initially a radio event, is, by 2004, taking place in a highly varied media environment. CBC, having had great success with the contest, now uses the various facets of its media corporation to promote and produce the annual “battle of the books.” This is a sign of the influence of integrated media empires: that is, media concerns whose various outlets reinforce each other. Again, it is useful to think of Winfrey as an example: her syndicated television show advertises her Web site, which advertises her magazine O, which advertises her book club, and also her charitable foundations, etc. And each link in the empire supports the workings of all the others. By linking Canada Reads to the video-on-demand portion of the CBC Web site, to its television series “Country Canada” and to its airport narrowcast channel “News Express,” Dharmalingam and the CBC Business affairs office are clearly working within the parameters of an integrated media empire.

This seemingly quotidian, run-of-the-mill business document is full of meaning for the student of publishing and media in Canada. Other such documents relating to the Canada Reads competition are to be found in the Susan Musgrave archives at McMaster University’s William Ready Division of Archives and Research 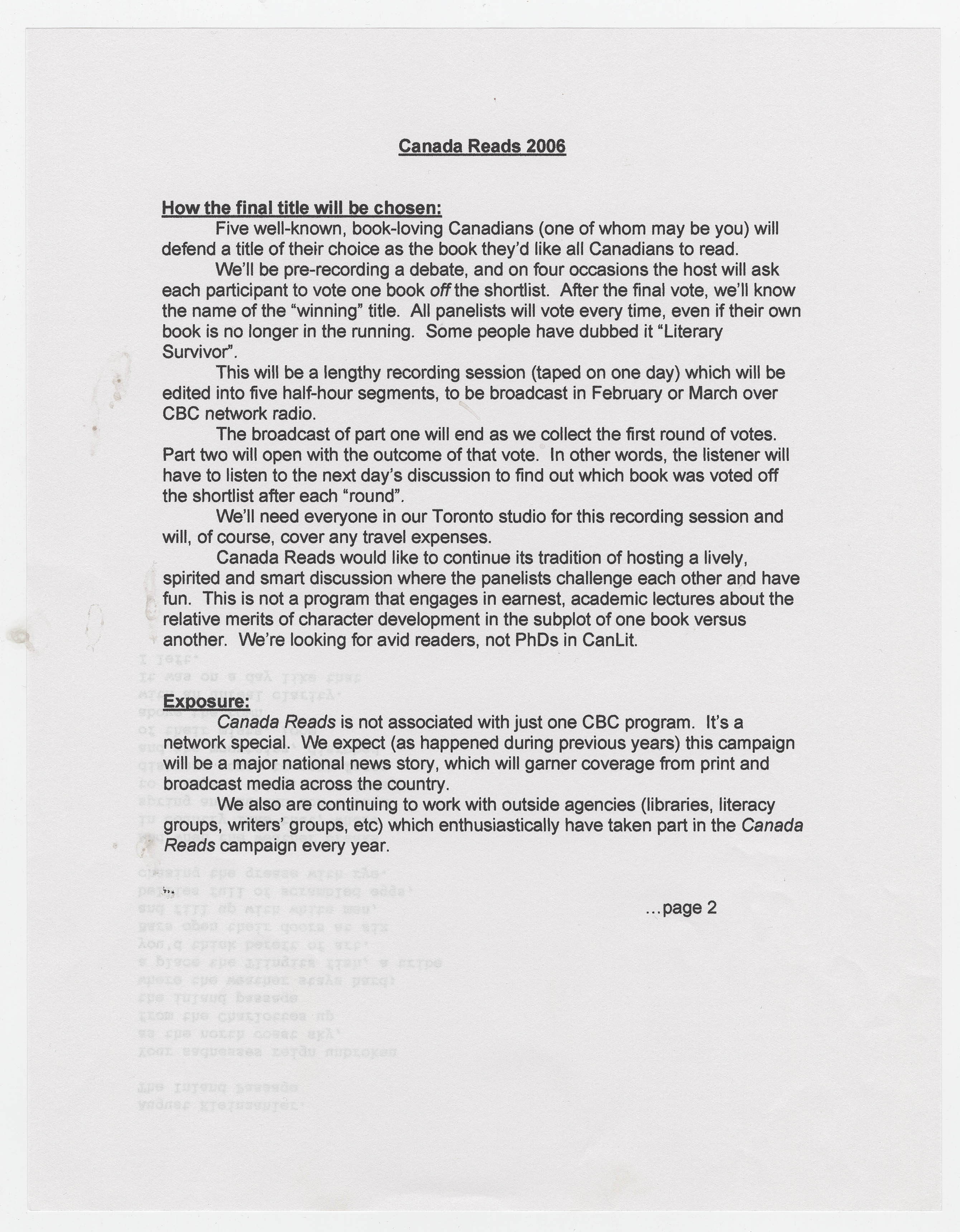