Great biographical depth emerges from contemporary character sketches. For an excellent narrative of the life of George Maclean Rose (1829-98), one need to look no further than A Cyclopaedia of Canadian Biography Being Chiefly Men of the Time (1888), a compendium he himself edited. It provides us with one of the best accounts to that date of Rose’s life, and that of his brother Daniel, at the height of their publishing activities. But a surprising resource, a cashbook for the Rose Publishing Company, presents particular details of their lives that complement or even surpass the portraits drawn in published biographies. Across the many accounts, the cashbook offers a highly personal record of the activities and interests of George and Daniel Rose. 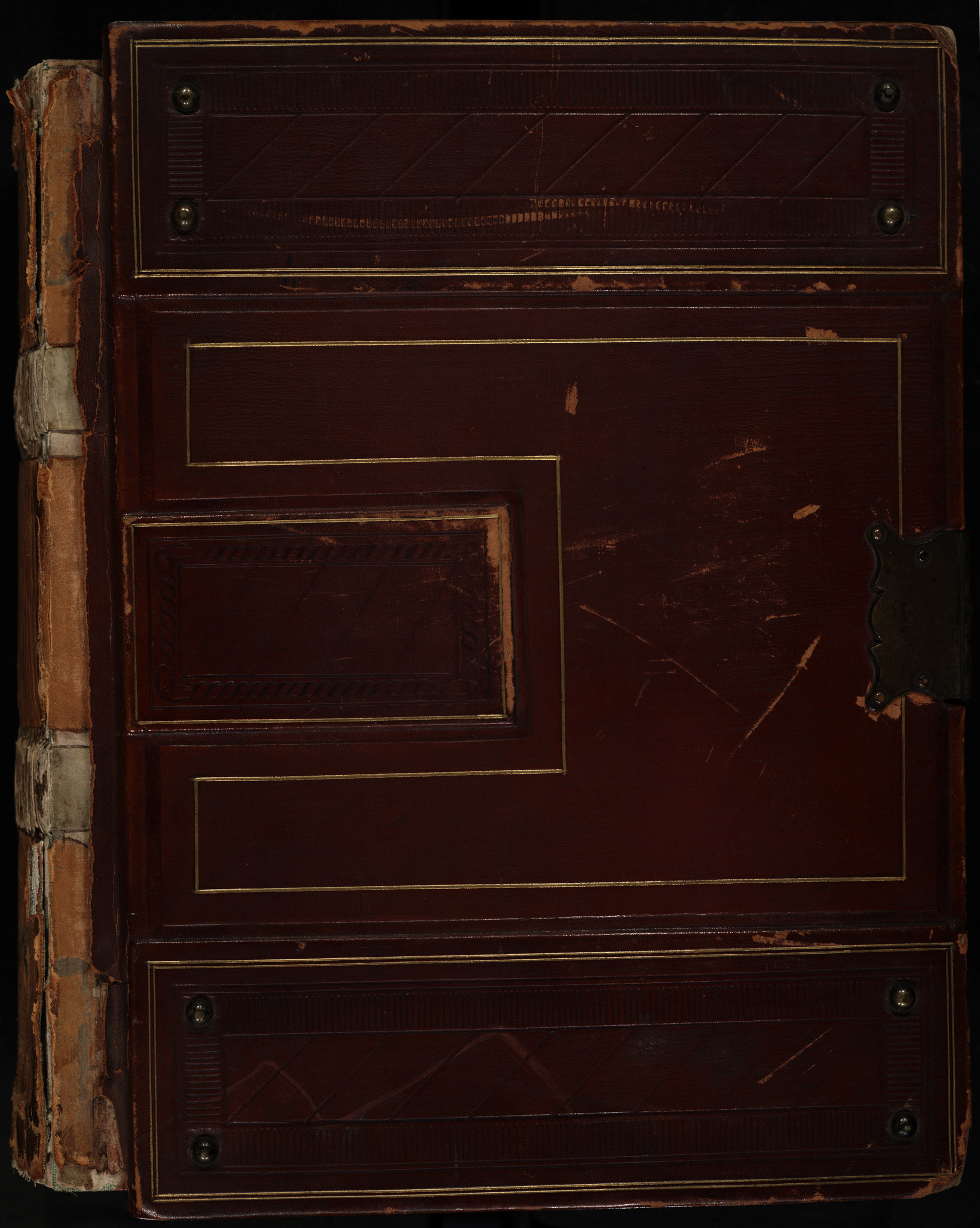 From the Scottish Highlands, the family of Donald Rosie arrived in Quebec in 1851, changing their name to Rose upon immigration. At twenty-two a young but already-experienced printer, son George M. Rose soon started up a printing business with his elder brother Henry in Montreal, but this proved to be short-lived. In 1861 George and partner Robert Hunter founded Hunter, Rose and Company in Quebec City, moving the firm to Ottawa in 1865 to follow lucrative government contracts and, in 1868, establishing a Toronto branch that became its sole operation by 1871. The company was active in publishing but chiefly in printing and bookbinding. Hunter died in 1877, after which Rose brought his brother Daniel, by then also an experienced printer, from Montreal to Toronto to join the Hunter, Rose business. At that time, George also joined Robert J. Belford to create a separate publishing operation, the Rose-Belford Publishing Company Limited, in order to issue inexpensive fiction. Upon Belford’s departure early in 1879, George Maclean Rose was left with controlling interest. 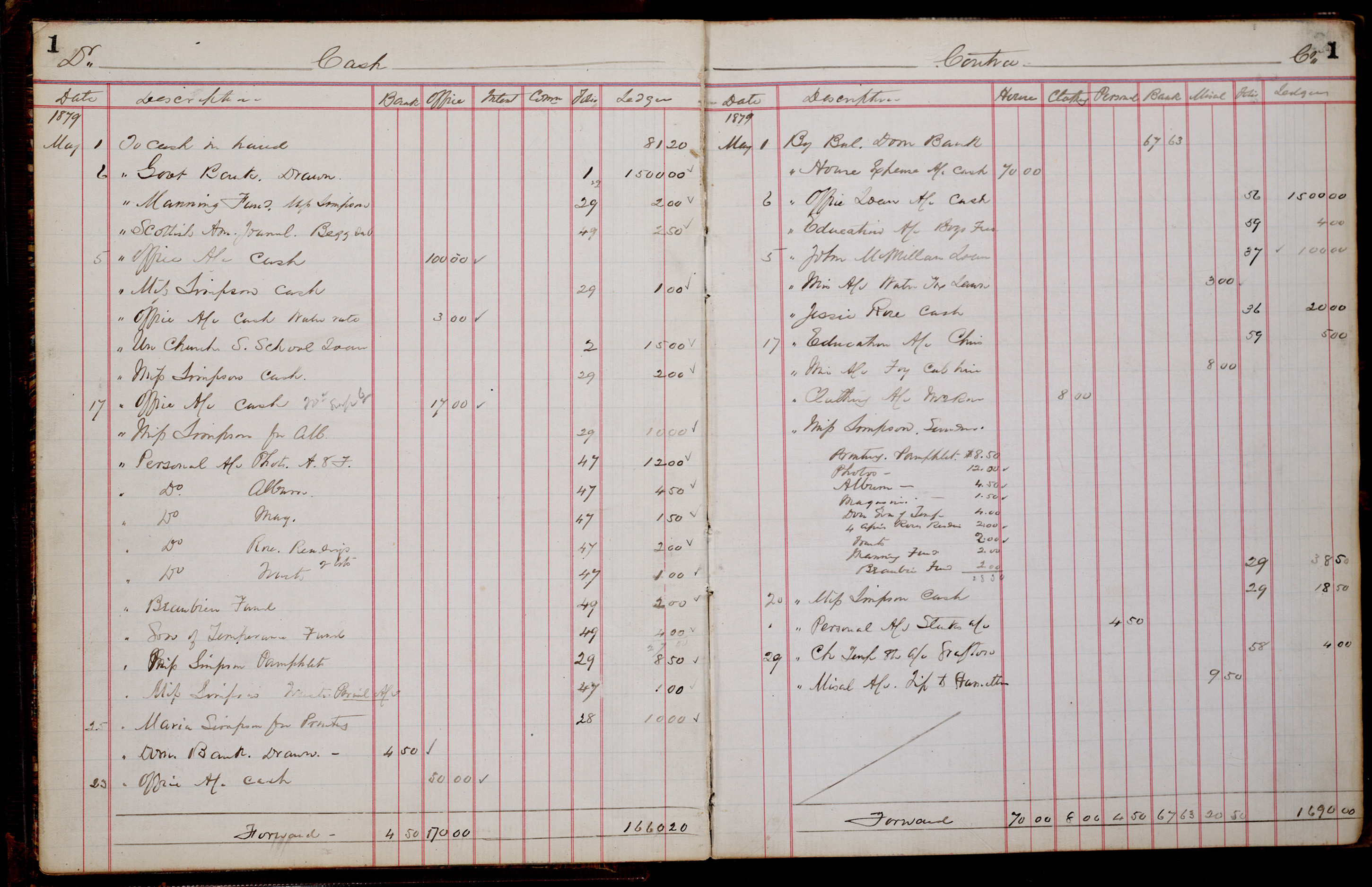 Later that year, on the first of May, a bookkeeper at Rose-Belford opened a blank accounting book – a sample copy in full Russia binding with raised ends and bands, gilt line, and blind tooling, produced by Hunter, Rose – intending to continue the record of daily cash transactions. Indeed, Rose-Belford used the book as a double-entry cashbook until the end of 1887, the company being renamed the Rose Publishing Company midway through, in 1883, when George’s brother Daniel entered this partnership. Throughout, the cash book duly noted typical business expense items, such as rent and loan interest payments to Hunter, Rose and Company, cigars, tobacco, umbrellas, newspapers, and memberships in the National and Central Clubs. But, importantly though unintentionally, the bookkeeper also documented the personalities of the Rose brothers in this record book, in a more immediate and day-to-day manner than formal published biographies. 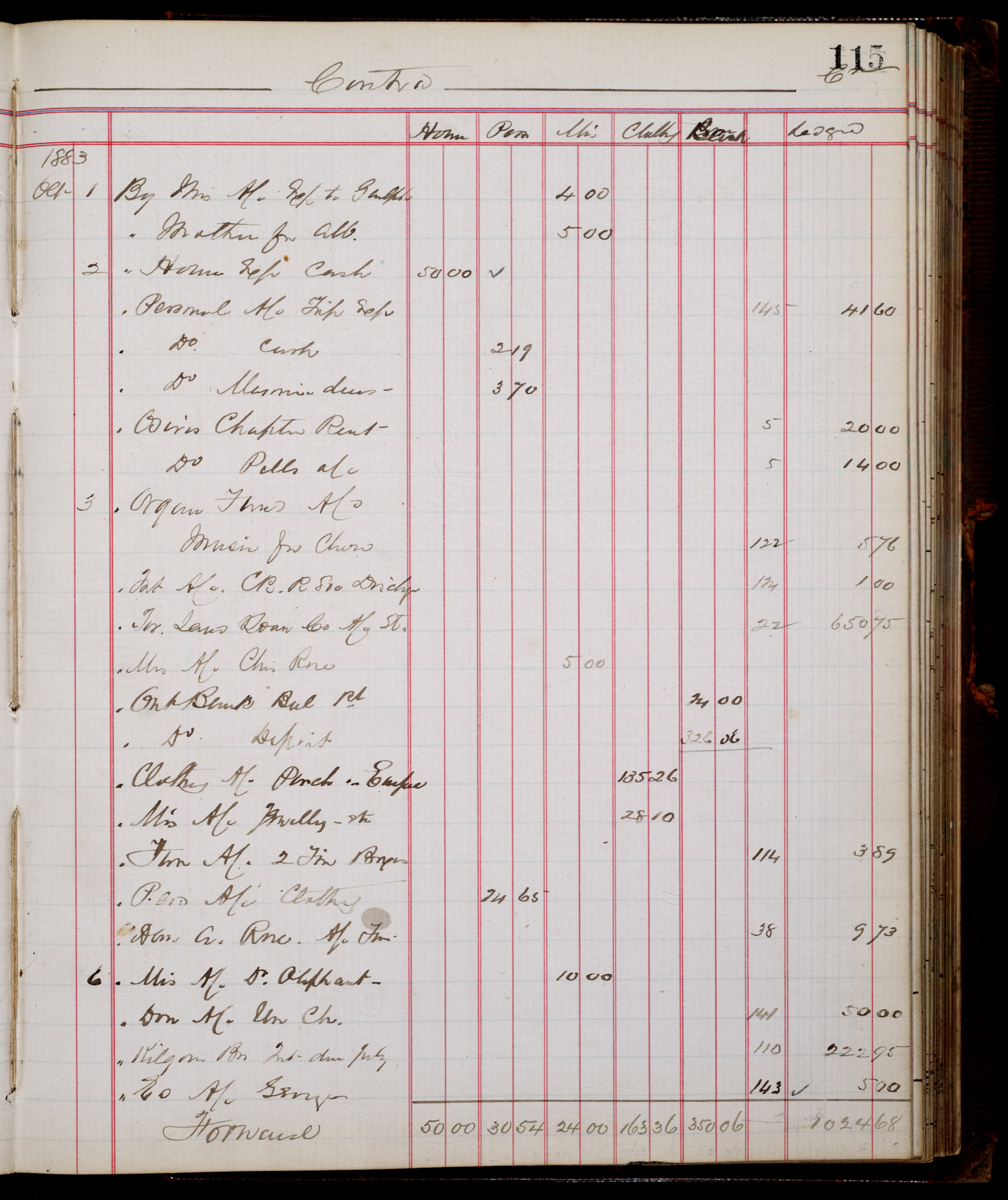 The brothers adhered to the Unitarian faith, and the cashbook contains entries concerning the Unitarian Church Sunday school and the organ fund and include contributions by Church members W.B. Hamilton and Mrs. Peter Lamb to the building fund. Daniel Rose was a life member of the Mechanics’ Institute, and the education account bears some charges relating to this organization. He was also active in the Masonic Order, with $3.70 dues and $20 rent for the Osiris Chapter charged to a personal account on 2 October 1883. Interest in their homeland is suggested by regular $2 charges for the St Andrew’s Society. And political support is suggested by a proliferation of election fund entries in 1886, probably relating to William Holmes Howland’s successful bid to become mayor of Toronto.

But the Rose brothers were, first and foremost, staunch supporters of the temperance movement, and much of the cashbook evinces their fervent efforts against alcohol. The Sons of Temperance figures most substantially in the records, especially its Crystal Fountain Division, in which George M. Rose played a principal role. Also numerous are charges relating to the Temperance Coffee House Association, the Dominion Alliance for the Suppression of the Liquor Traffic, and Blue Ribbon societies. Howland is named in connection with several of the agencies. Print jobs for “Miss Maria Simpson” in 1879 with Rose-Belford probably did not include her hagiographical works on Rose entitled Brother G.M. Rose and Sayings and Doings of Noted Temperance Advocates (these works, though published that 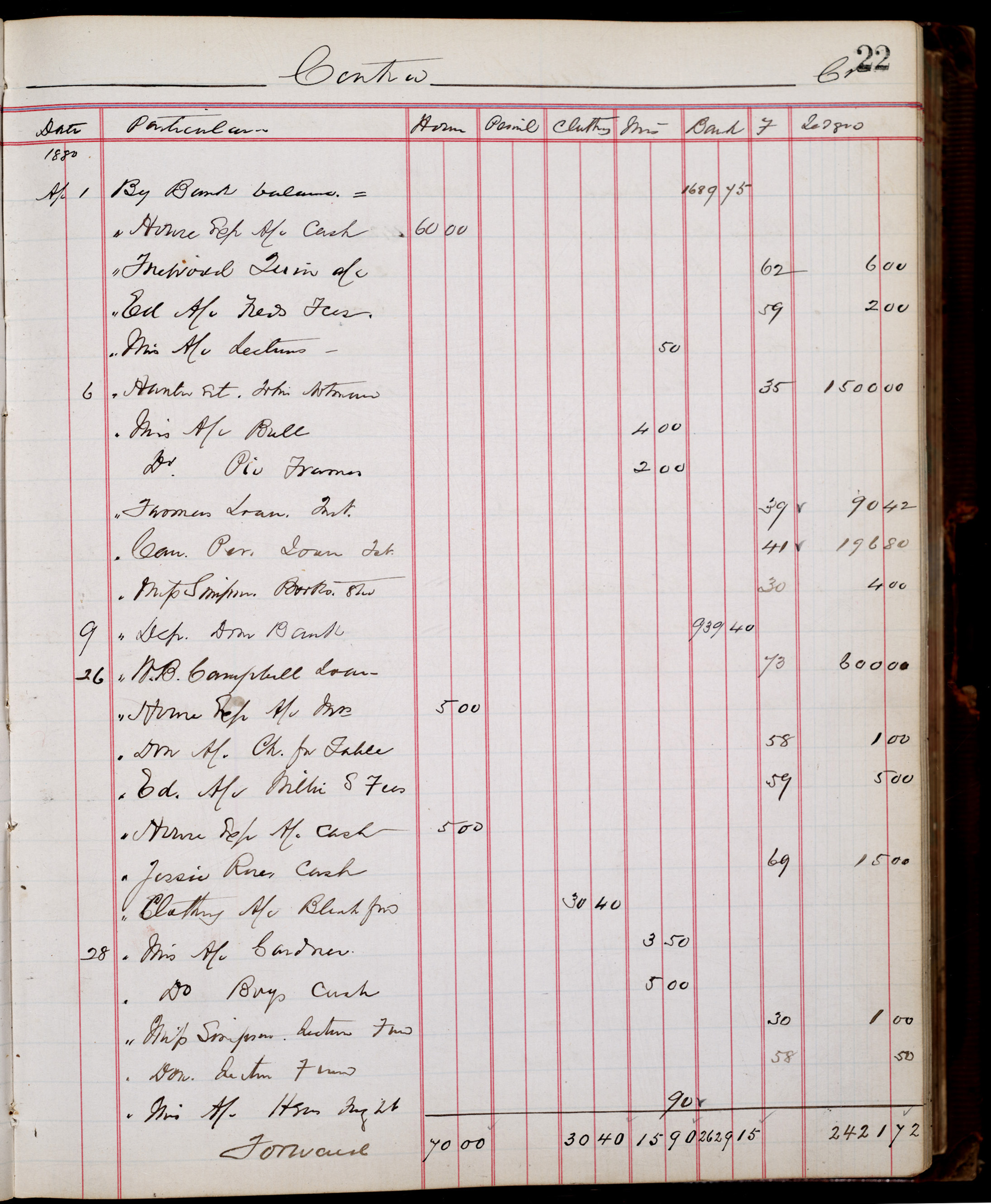 year, specify Hunter, Rose as printers) but seem to have been more in the line of small runs for temperance associations. This was the case on 30 December 1879, when the book records her cash payment “for Club printing,” probably with reference to the frequently mentioned Rine Club. Simpson also made numerous purchases of pamphlets, magazines, tracts, and books from the company, including copies of the Rose Readings which featured selections from temperance meetings. The company even bore a $1 charge on 28 April 1880 for a contribution to Miss Simpson’s lecture fund. George M. Rose was a prominent member of the Temperance Colonization Society, as a result of which the office account was reimbursed for $541.75 on 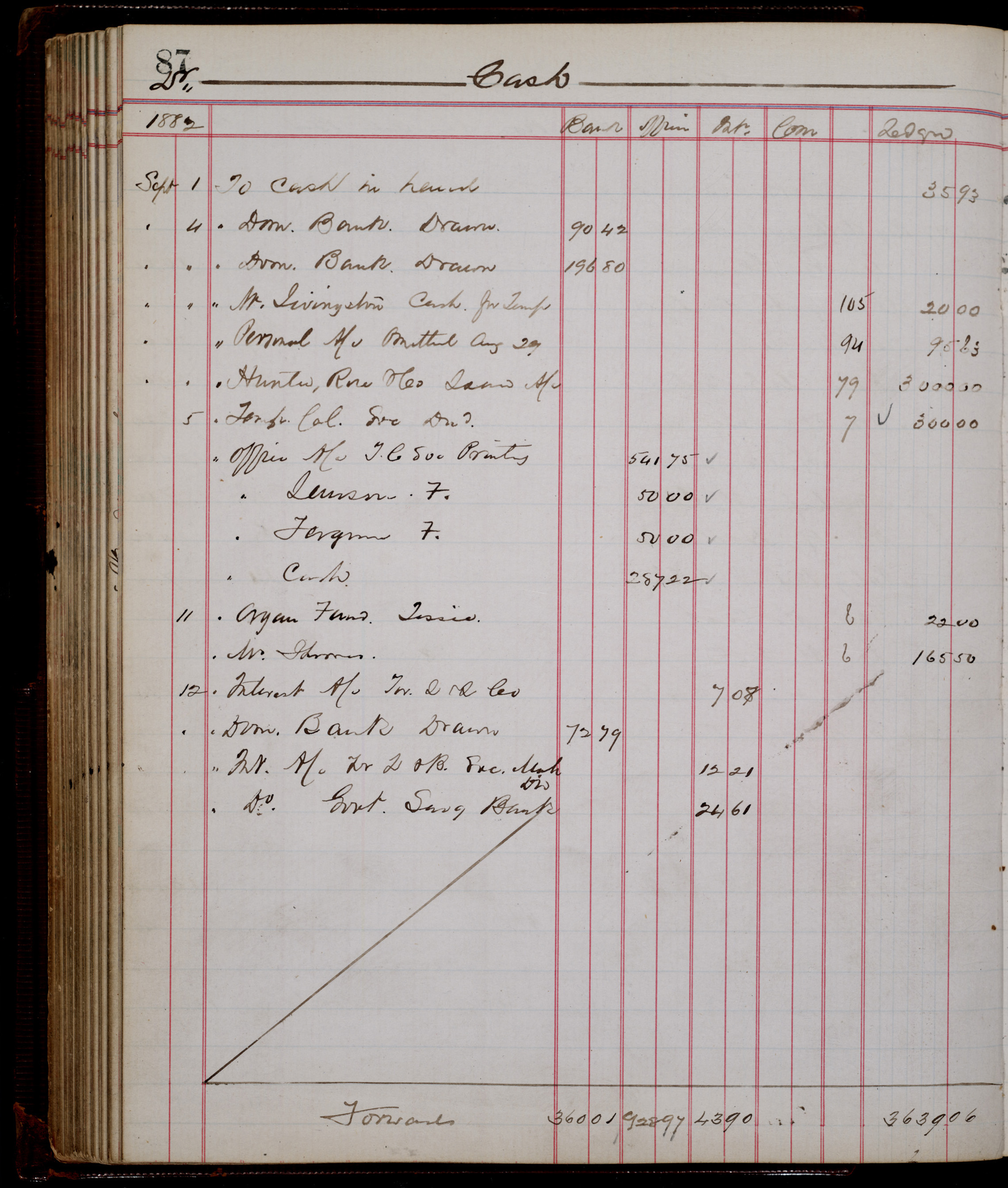 5 September 1882 for printing done on behalf of this group. Other entries indicate small print jobs, perhaps of “Life Assurance and Total Abstinence” or a similar leaflet, performed for the Citizen Publishing Company.

Although the brothers lived to see Hunter, Rose remain on firm footing, Rose Publishing encountered financial difficulties and, in 1894, folded. George Maclean Rose died just four years later, on 10 February 1898, his brother Daniel dying not long afterward on 7 May 1904. Hunter, Rose continued under Atwell Fleming, George’s three sons Daniel A. Rose, George M. Rose Jr., and Fred. W. Rose, and finally the latter’s son-in-law George G. Smithers before its sale in 1948 to Sir Isaac Pittman and Sons, reincorporated as the Hunter Rose Company Limited. This became a division of Copp, Clark in 1965 and, in 1983, ended in receivership, after over 120 years of business.