Hugh Scobie (1811-53), a lawyer from Scotland, arrived in Canada in 1833. He published a newspaper, the Scotsman (known later as the British Colonist) in 1838, which was located on 16 King Street East, Toronto. Between 1844 and 1853, Scobie advertised his services as a "Bookseller, and stationer, printer, bookbinder, lithographer, copperplate and woodengraver." In 1847 he issued the first Canadian Almanac and Repository of Useful Knowledge.

Scobie invited John Balfour into partnership in 1846 under the business name of Scobie & Balfour. When Scobie died in 1853, his widow sold the British Colonist to Samuel Thompson and two other partners. Thomas Maclear, 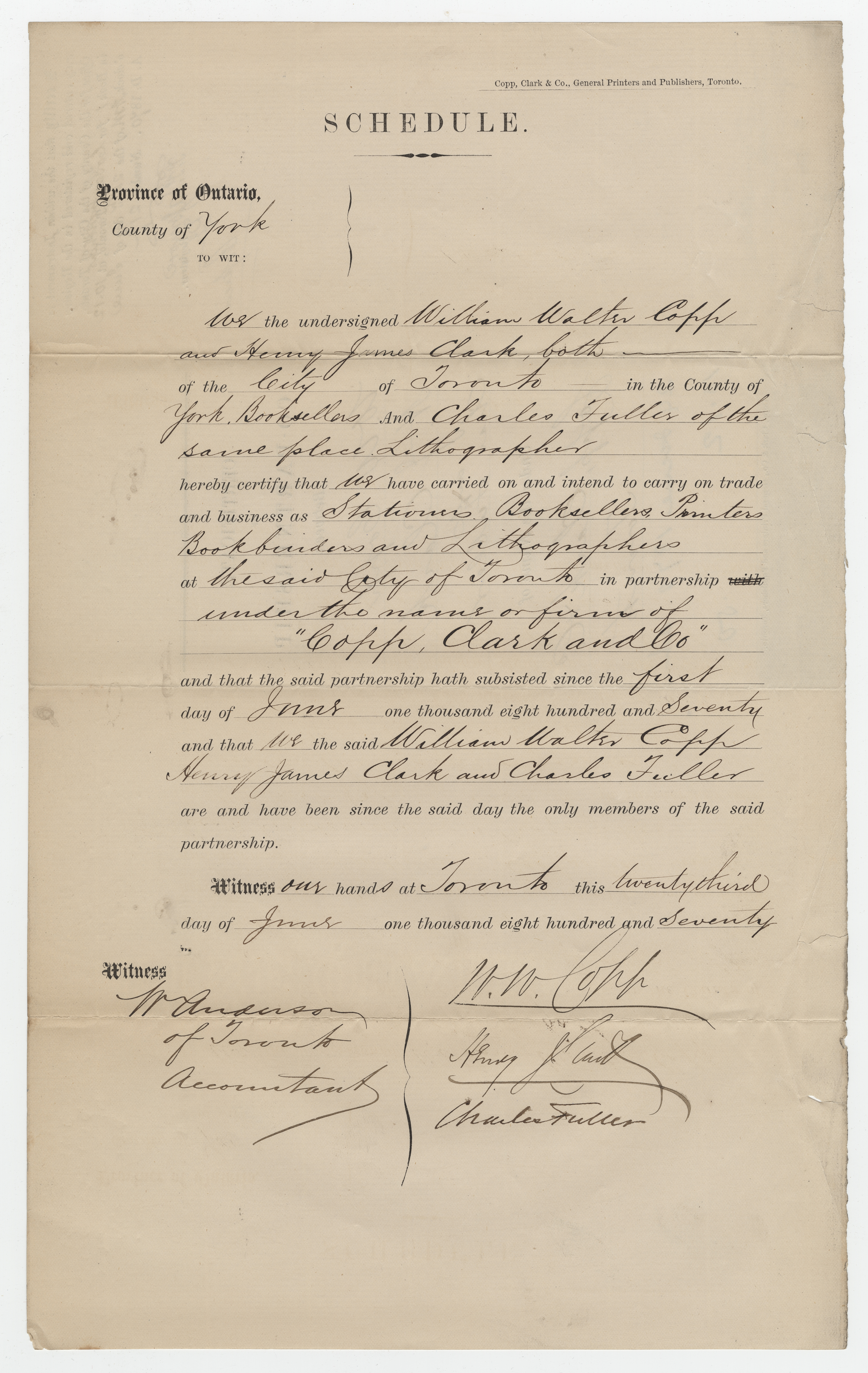 William Cameron Chewett, and William Walter Copp acquired the Canadian Almanac and other parts of the business. In 1854 the name was changed to Maclear and Company, and the business continued to sell stationery, publish books and almanacs, and operate a steam press. In 1861, management changed again and the business became known as the W.C. Chewett & Co. About this time, Copp, a former apprentice of Scobie, and Henry J. Clark purchased control and renamed the company after themselves. The business then became known as the Copp, Clark and Company, and was registered under this name in 1870. It also established its own typesetting, printing, and binding operations. At this time a manufacturing plant was set up on Colborne Street.

In Board of Trade reports for Toronto, the 1860s saw the increase of popular, family oriented periodicals imported directly from Britain. British publishers had 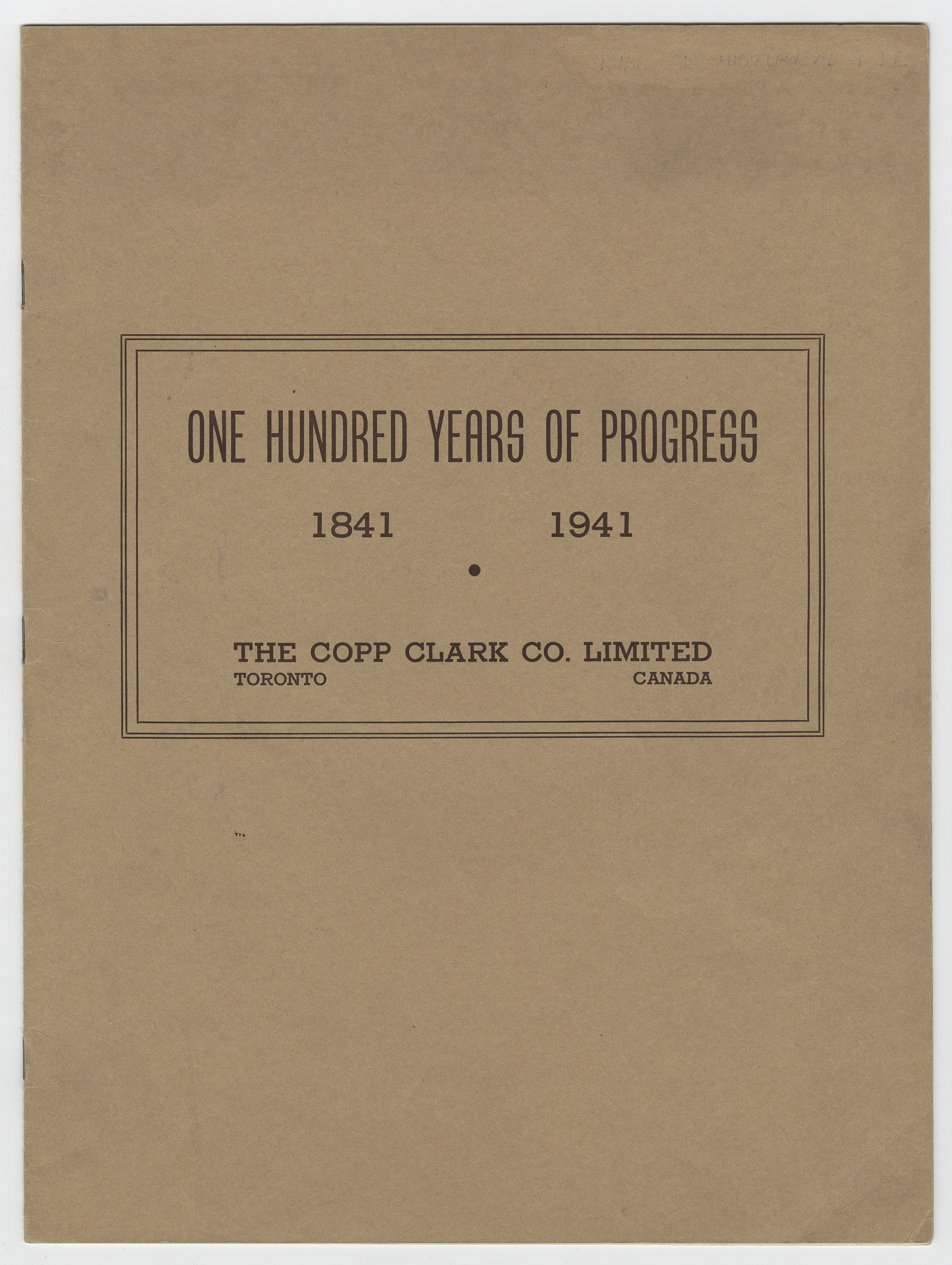 found the Canadian trade worthy of cultivating, and were able to offer their buyers books at, and in some cases below, English published prices. In 1865, 10,000 copies of different titles of British journals were imported. In 1873 the retail department of Copp Clark was bought out by Samuel Hart and Thomas Rawlinson, and the company concentrated on publishing and wholesaling. In 1885 after twenty-two years of steady growth, the business was incorporated under the name of The Copp Clark Co. Limited. Its capital was $200,000. The shareholders were W.W. Copp, H.J. Clark, Charles Fuller, Henry L. Thompson, and Arnold William Thomas, with W.W. Copp as president and H.J. Clark as vice-president.

The company struck a deal with the International Novelty Company of 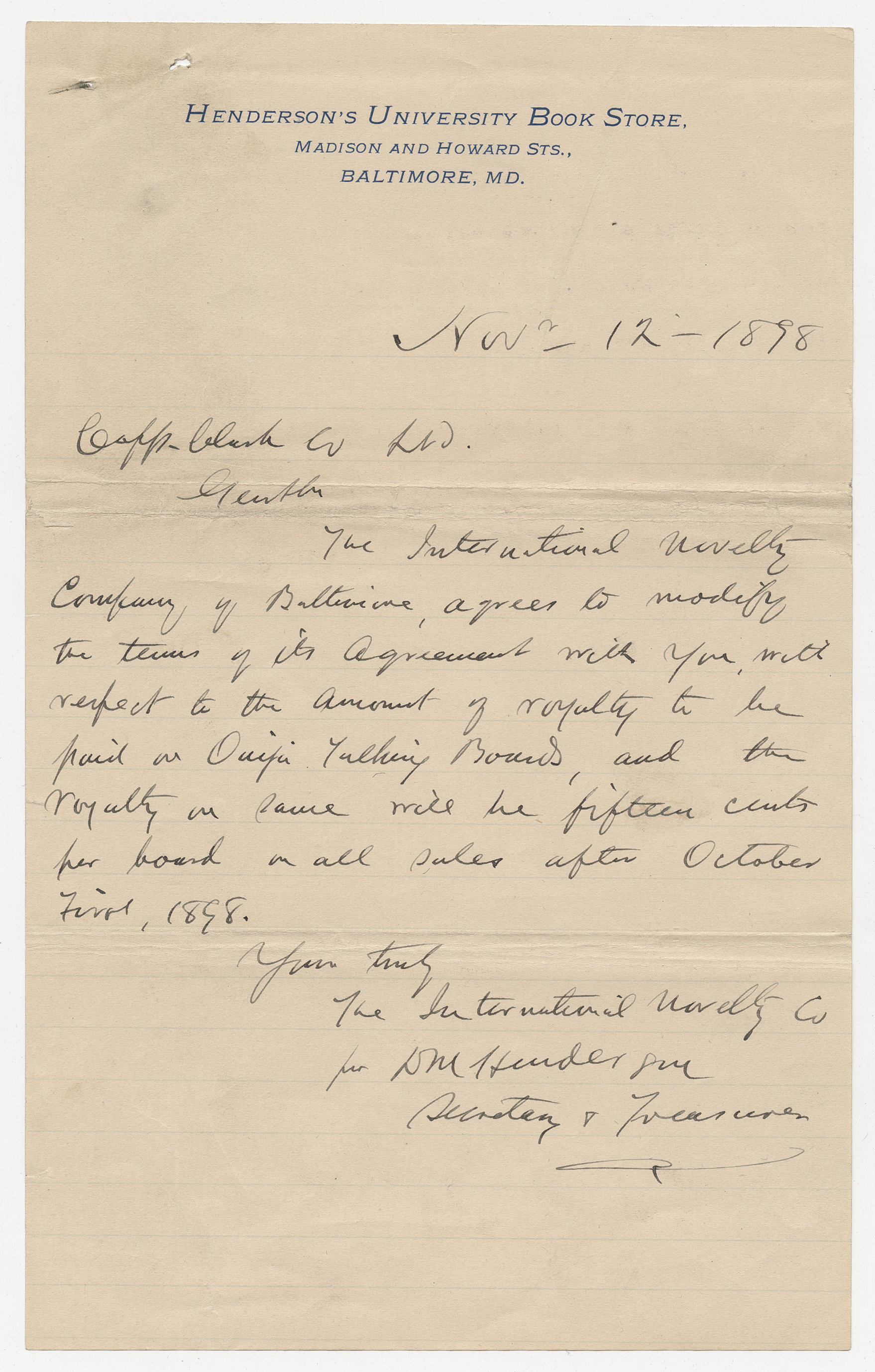 Baltimore, Maryland on 15 June 1892 to lease the rights to Elijah Bond’s Canadian patent (No. 36,092) and manufacture the Ouija board in Canada, under the Copp Clark games division. The agreement was later modified in a letter dated 12 November 1898. The royalty fee was reduced from twenty-five cents to fifteen cents per Ouija board. The archives of Copp Clark contain original correspondence which documents legal disputes over Copp Clark's rights to the Canadian edition of the game. In 1894 W.W. Copp died. His son, William Copp, became vice-president and H.L. Thompson assumed the presidency.

The Toronto fire of 1904 was a setback for Copp Clark. Their Front Street warehouse burned to the ground, destroying most of the early company records. In the summer of 1904 a new building was put up on 64 Front St. West. Dudley Thomas, later president of Copp Clark, and grandson of George Elliott Thomas (a partner with Thomas Maclear), began work in the shipping room. 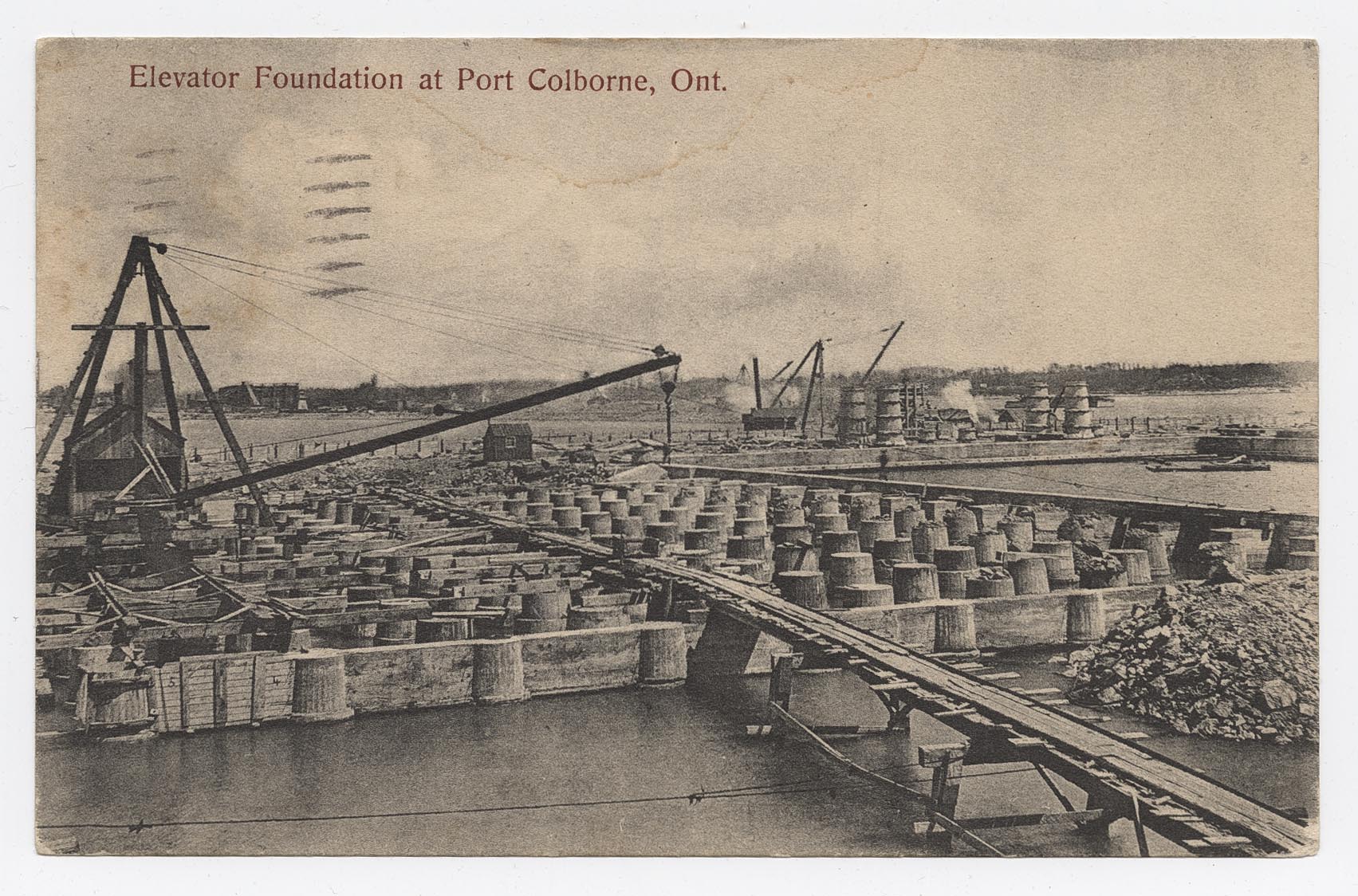 The period of rebuilding, following the fire, saw tremendous growth and a reorganization of the departments. A new factory and warehouse were built on Wellington Street. In 1919 Dudley Thomas rejoined the company as assistant supervisor, after serving overseas during the First World War. He became vice-president of the firm in 1936 and president in 1937. His younger brother, Brigadier Allan Thomas, took the position of vice-president. 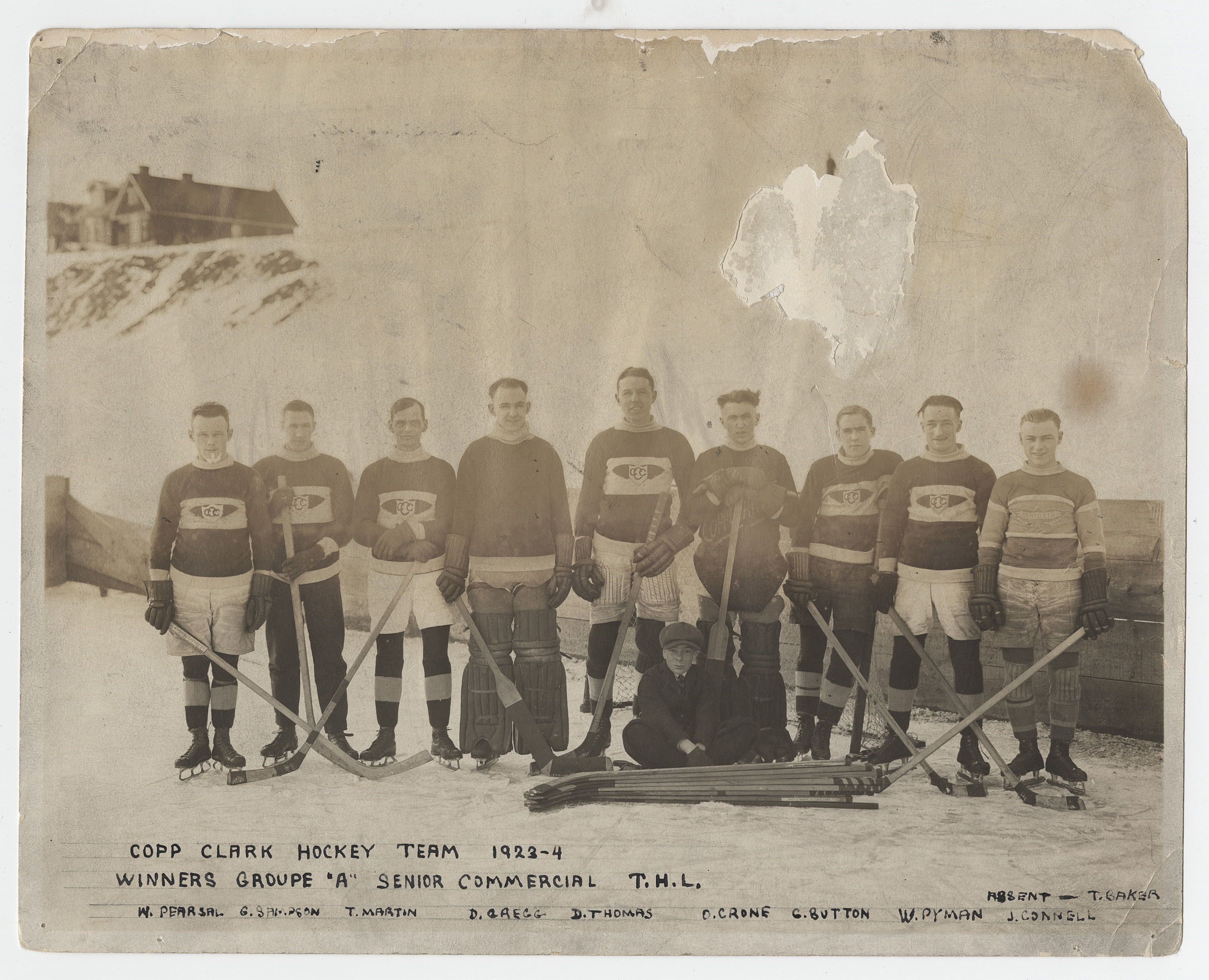 Since the 1920s, Copp Clark has had a great variety of interests and undertook many kinds of printing: flags, games, boards, and labels. Arrangements for Canadian representation were formed with American Colortype, Gartner and Bender for seals, tags and greeting cards, Parker Bros for games, and the Samuel Low Company for toy books. Intramural sports were enjoyed by employees, and in 1926, the Copp Clark hockey team, with Dudley Thomas as a defenseman, won the championship of the Toronto Hockey League.

By this time the company had gained an enviable name in the field of textbooks. A strong impetus was provided for publishers to produce texts in 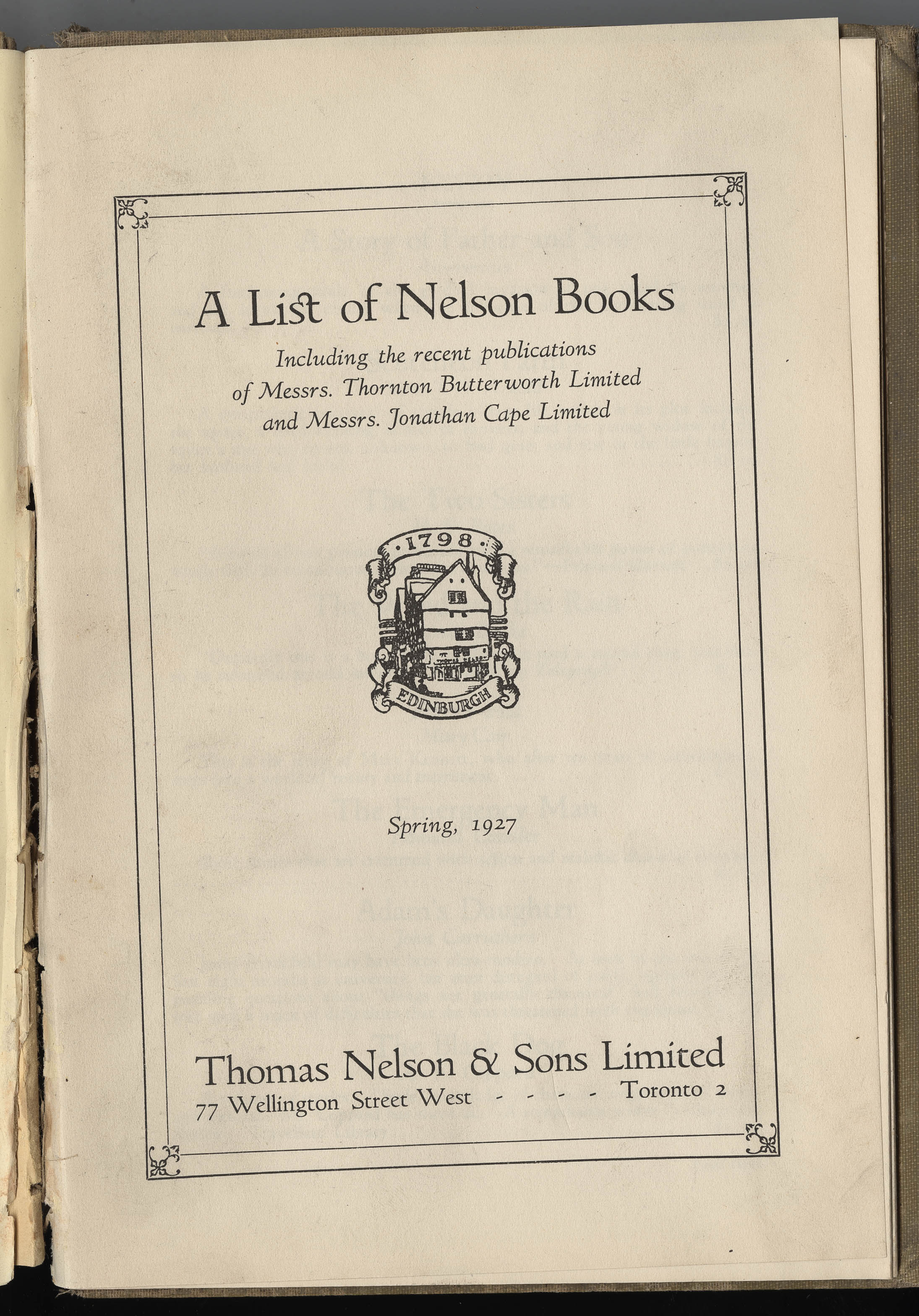 major subject areas soon after Ontario’s minister of education passed legislation in 1884 making the use of indigenous textbooks mandatory. The Ontario Readers series was initiated that year after an agreement between the Department of Education and three prominent publishing houses: Thomas Nelson & Sons, W.J. Gage & Co., and The Canada Publishing Co. Nelson sold its publication rights to Copp Clark. The agreement gave the three firms the exclusive right to publish the series for a period of ten years. Among the early texts were well-known books such as Bourinot's Constitutional History of Canada, Henderson and Fletcher's Latin Readers and The Copp Clark Literature Series. In 1922, company contacts in educational fields across Canada were arranged by H.L. Thompson. E.T. Lindsey went out on the road as Copp Clark's first textbook salesman.

The year 1938 marked a change in the Book Division of the company, with the creation of an Editorial Department and a period of rapid growth in the textbook department. Such texts as The Story of Canada and the Canadian Reading Development Series 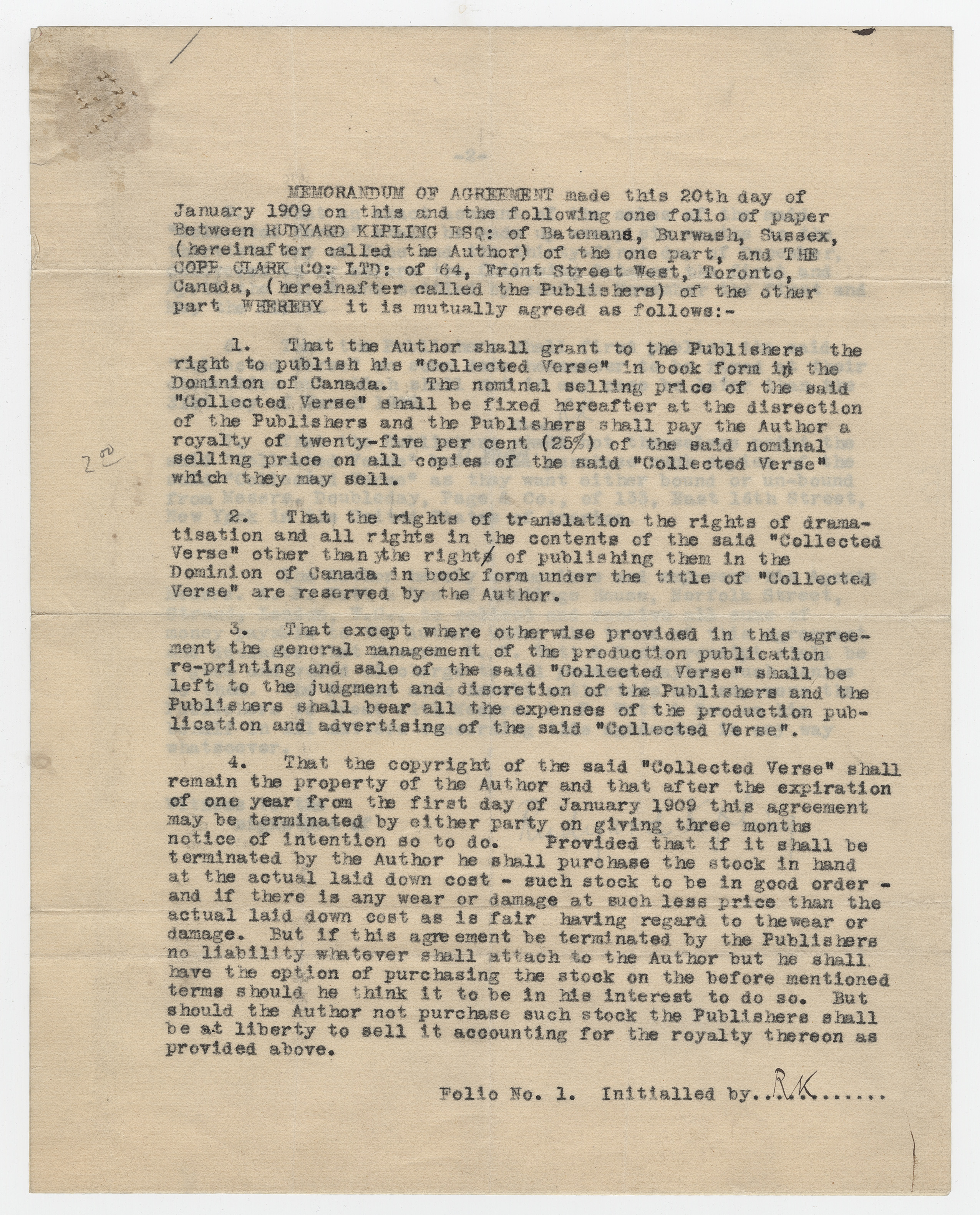 were representative of the new thrust. An increasing number of titles, authored by Canadians, followed. Canadian editions of foreign texts continued as a significant branch of publishing in order to sustain competition from American and British markets. For many years, Copp Clark published L. Frank Baum's Oz series under its imprint. Copp Clark also published works by such other notable authors as Winston Churchill, Joseph Conrad, F. Scott Fitzgerald, Washington Irving, Rudyard Kipling, Sinclair Lewis, and Edith Wharton. Copp Clark combined its solid base in textbooks with wholesale operations to move into agency publishing for several publishing houses in the United States and the United Kingdom and provided warehousing facilities for other publishers. 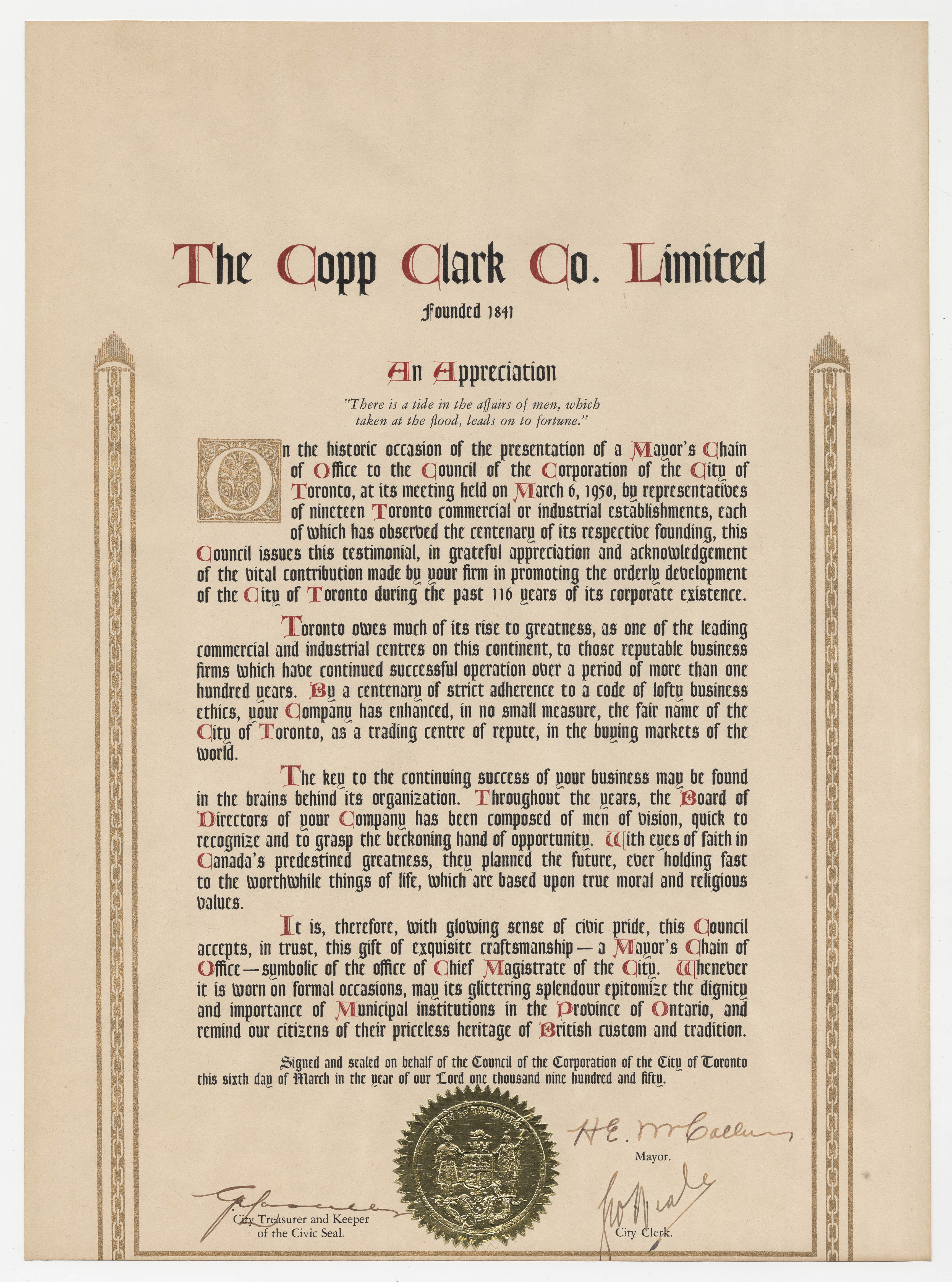 In 1955, Dudley Thomas retired and the assets of the Copp Clark Company Limited were acquired by the newly formed The Copp Clark Publishing Co. Ltd. In 1963, control was purchased by Sir Isaac Pitman (Canada) Limited – the Canadian branch of Pitman Publishing – and in 1965 the book manufacturing company of Copp Clark, the Hunter Rose Co. Ltd., and the book manufacturing facilities of Copp Clark were consolidated to form a new corporation, the Copp Clark Ltd. In 1986, Pitman Publishing was itself purchased by Longman Publishers who shortly thereafter were acquired by Pearson Plc, based in Mississauga, Ont. “Copp Clark Limited” (the trading name as of 1996) is currently owned by Pearson Plc and is the oldest continuously active publisher in Canada. In recent years, the book publishing and games businesses have been divested, replaced by products such as calendars for the financial market. 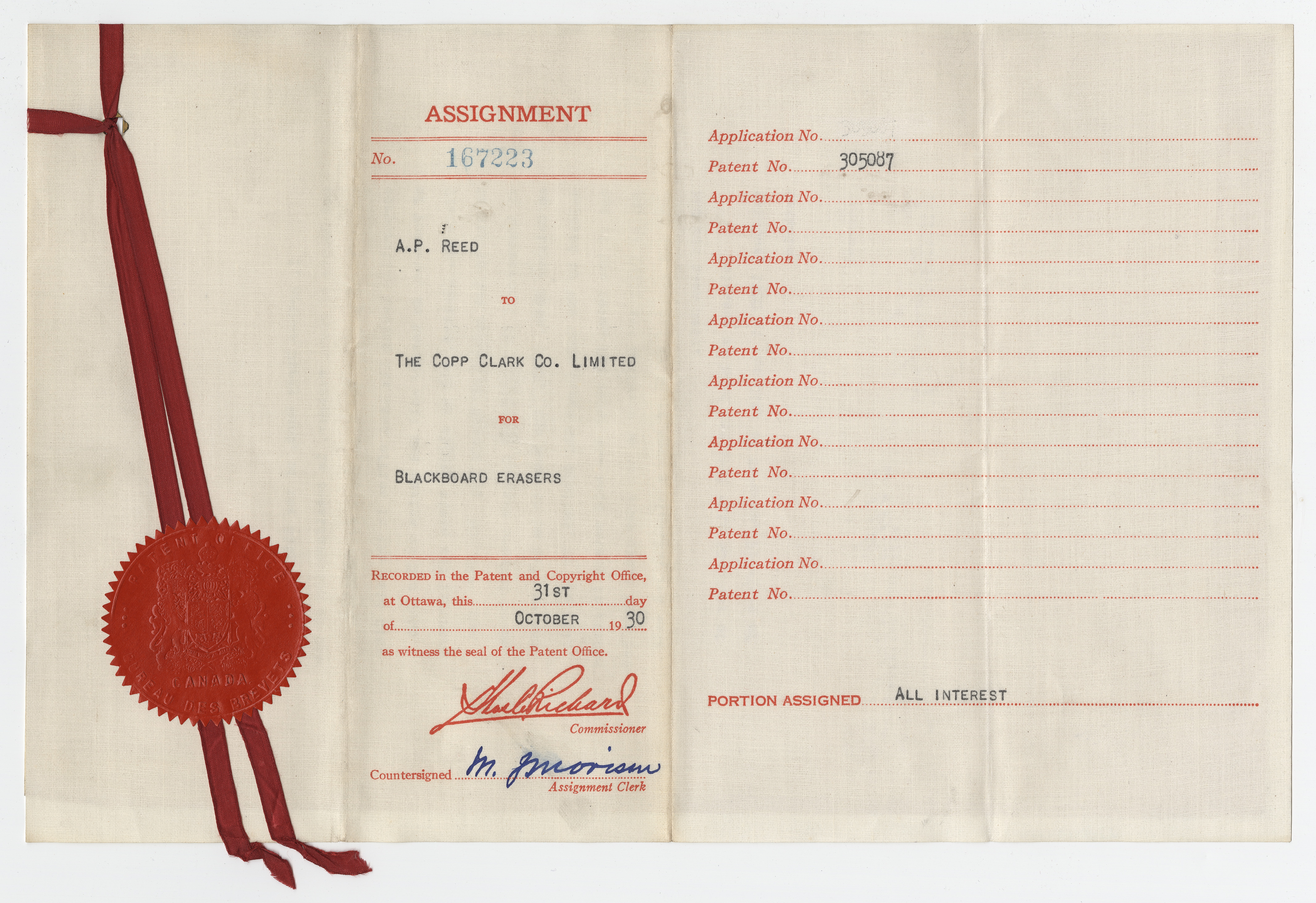 The archival holdings of Copp Clark at McMaster University, extend to 10.8 metres of textual records and graphic material and predominantly reflect the business, financial, and legal activities of the company, though author contracts are also present. These materials are a testimony to Copp Clark's multi-faceted approach to publishing and marketing of non-book products. As a publishing company, it was unique in its pursuit of opportunities in forming partnerships and marketing strategies which were beyond the standard approach of other publishers. Its success can be attributed to a level of risk taking and cashing in on lucrative trends such as seasonal products and family entertainment in a competitive and uncertain market.

Parker, George L. The Beginnings of the Book Trade in Canada. Toronto: University of Toronto Press, 1985.