Diane Schoemperlen (b. 1954) is a novelist and short story writer who currently resides in Kingston, Ontario. She is the author of seven short story collections and three novels. Her short story collection, Forms of Devotion, won the Governor General’s Award in 1998. Schoemperlen has been affiliated with a number of Canadian publishers over the course of her 35-year career, including Coach House, Quarry Press, Macmillan of Canada, HarperCollins, Flamingo, and Viking. Her most recent novel, At a Loss for Words: A Post-Romantic Novel, was published by HarperCollins in 2008. 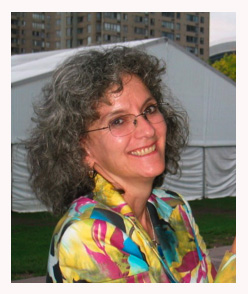 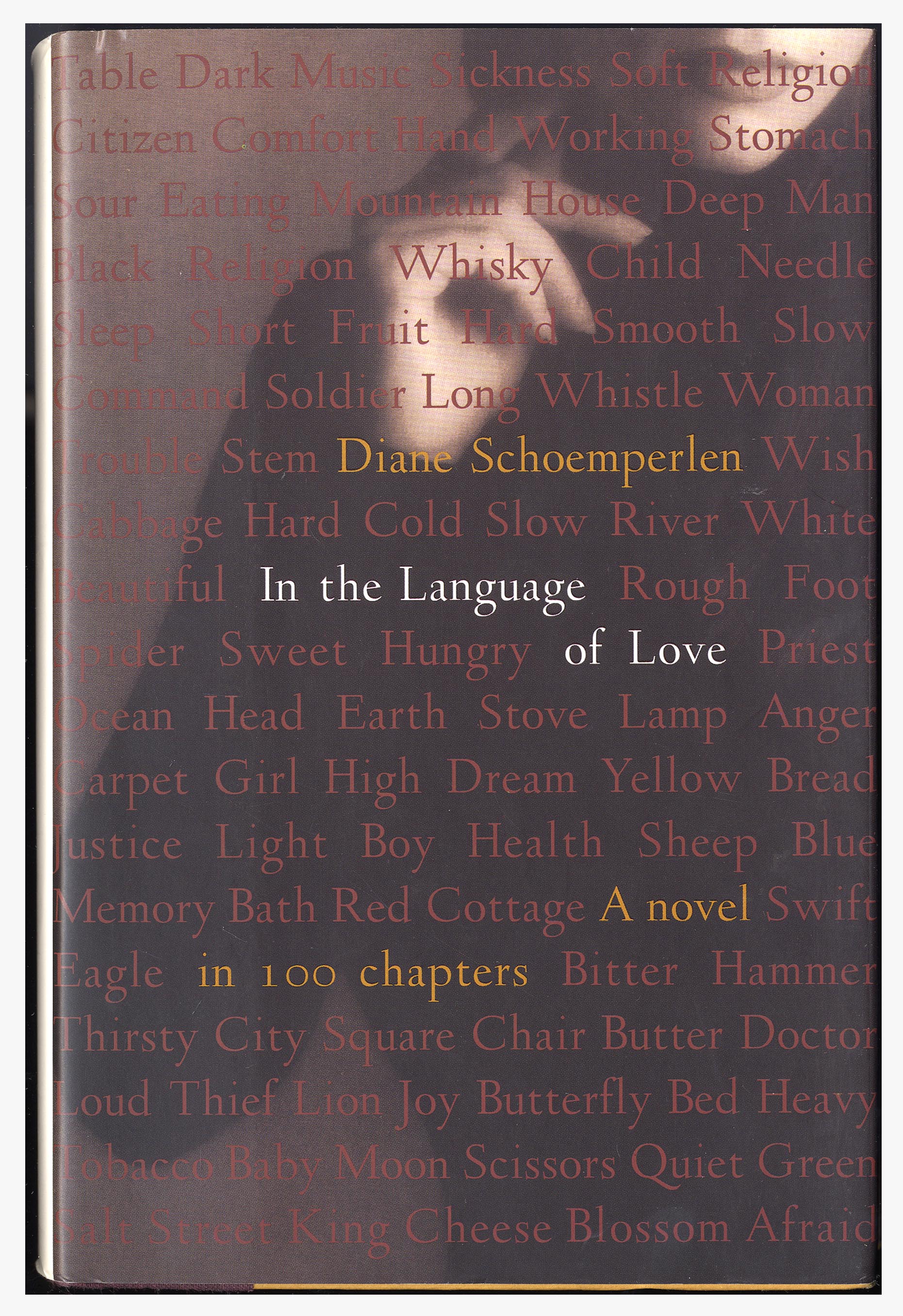 in 1998, and has been adapted for the stage and performed in Kingston and Toronto. She was previously nominated for the award in 1990, for another short story collection, Man of My Dreams, which was also nominated for the Trillium Prize. Schoemperlen’s first novel, In the Language of Love, was published by HarperCollins in 1994 and was nominated for the Books in Canada First Novel Award. In 2007, she received the Writers’ Trust of Canada’s Marian Engel Award. She has taught courses in creative writing at St. Lawrence College, the Kingston School of Writing, and the University of Toronto, and has given countless public readings, including appearances at Toronto’s annual International Festival of Authors. Schoemperlen’s most recent work, At a Loss for Words: A Post-Romantic Novel, was published in 2008 by HarperCollins. Diane Schoemperlen currently lives in Kingston, Ontario. 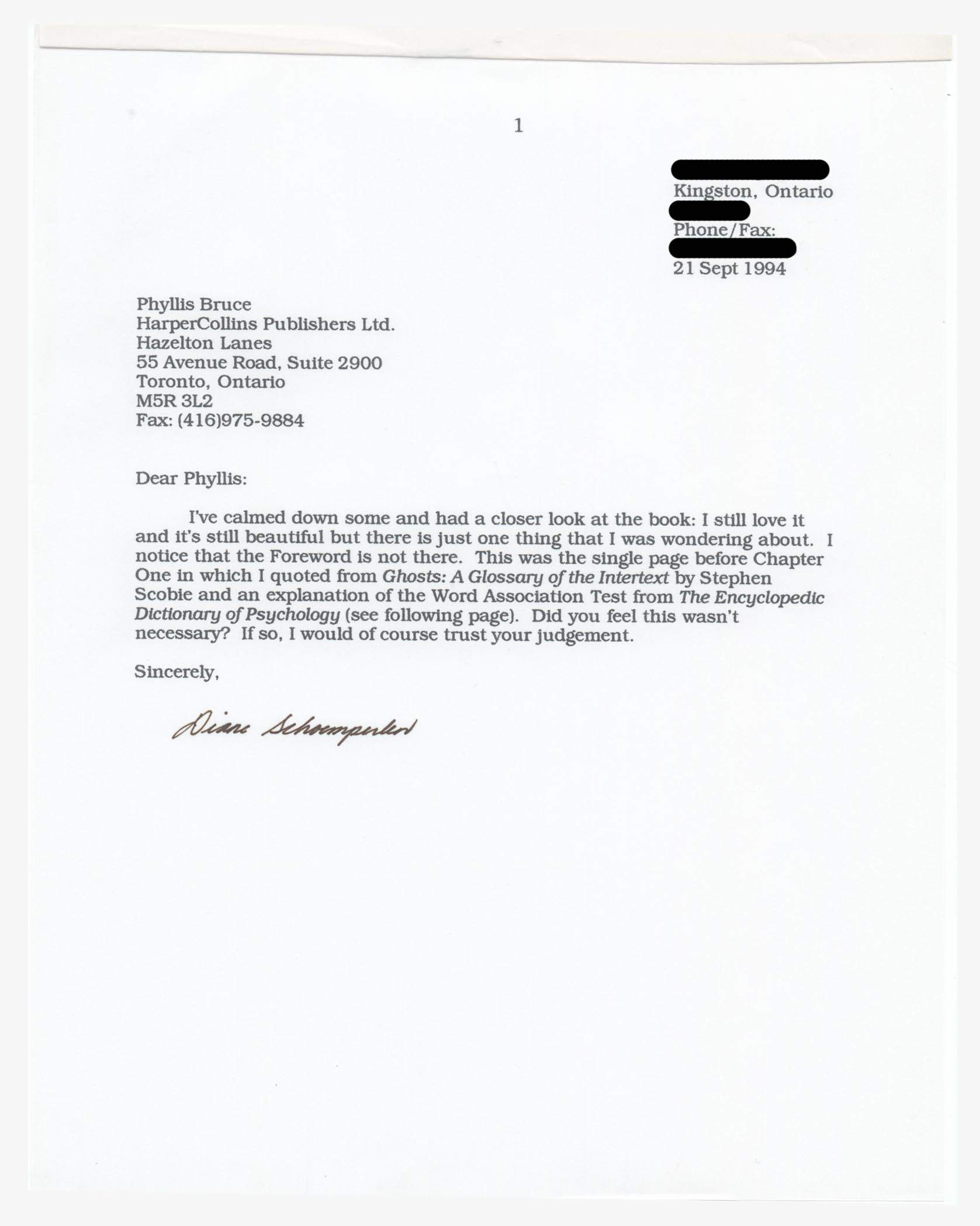 Diane Schoemperlen’s work has expanded the scope of authorship in Canada. Her body of work is significant for its experimental quality, as demonstrated in her novel In the Language of Love, which tells the story of the novel’s protagonist, Joanna, in 100 chapters, each of which is based on the stimulus words of the standard psychological Word Association Test. Schoemperlen’s contributions also demonstrate a flexibility of genre and media, as she has published novels, short fiction and poetry, as well as edited several short story collections; in addition, In the Language of Love was adapted into a stage play and has been performed in Kingston and Toronto. 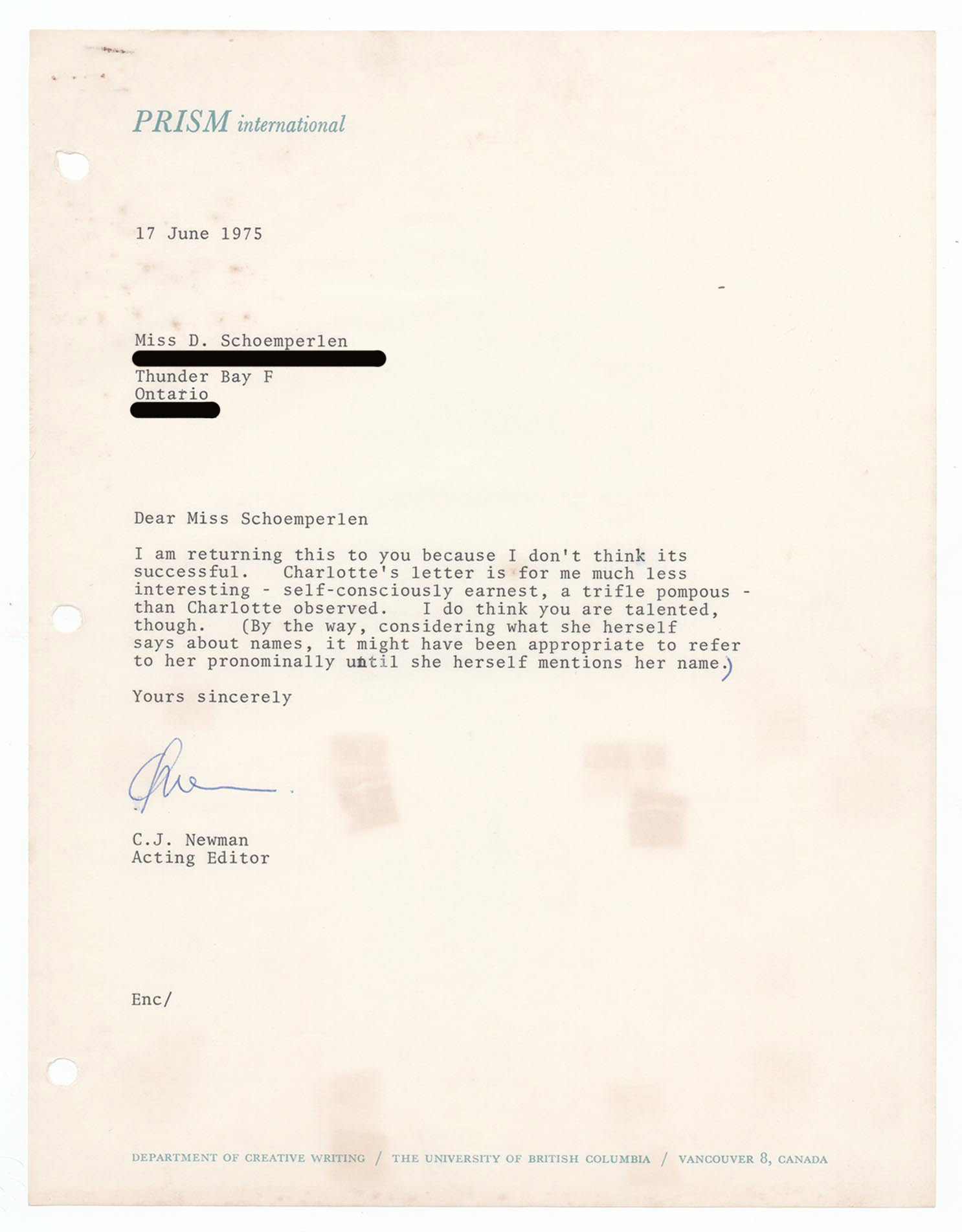 A prolific and meticulous author, she began submitting poetry and prose to Canadian magazines and journals in the early 1970s, while completing a degree in English at Lakehead University in Thunder Bay. Her extensive archives at Queen’s University contain more than 150 short stories, essays, plays, and early drafts of novels and are evidence of a high level of dedication to writing. For example, in 1978, Schoemperlen submitted thirty-four manuscripts for short stories, articles, and book reviews to such journals as Prism International, Chatelaine, Canadian Fiction Magazine, Event, The Fiddlehead, Descant, and The Hudson Review, with only five works being accepted for publication. Devotion to her career as an author paid off, however, as Schoemperlen’s publishing fortune eventually reversed. Her later correspondence files contain a number of requests from magazines for her submissions. In 1975, 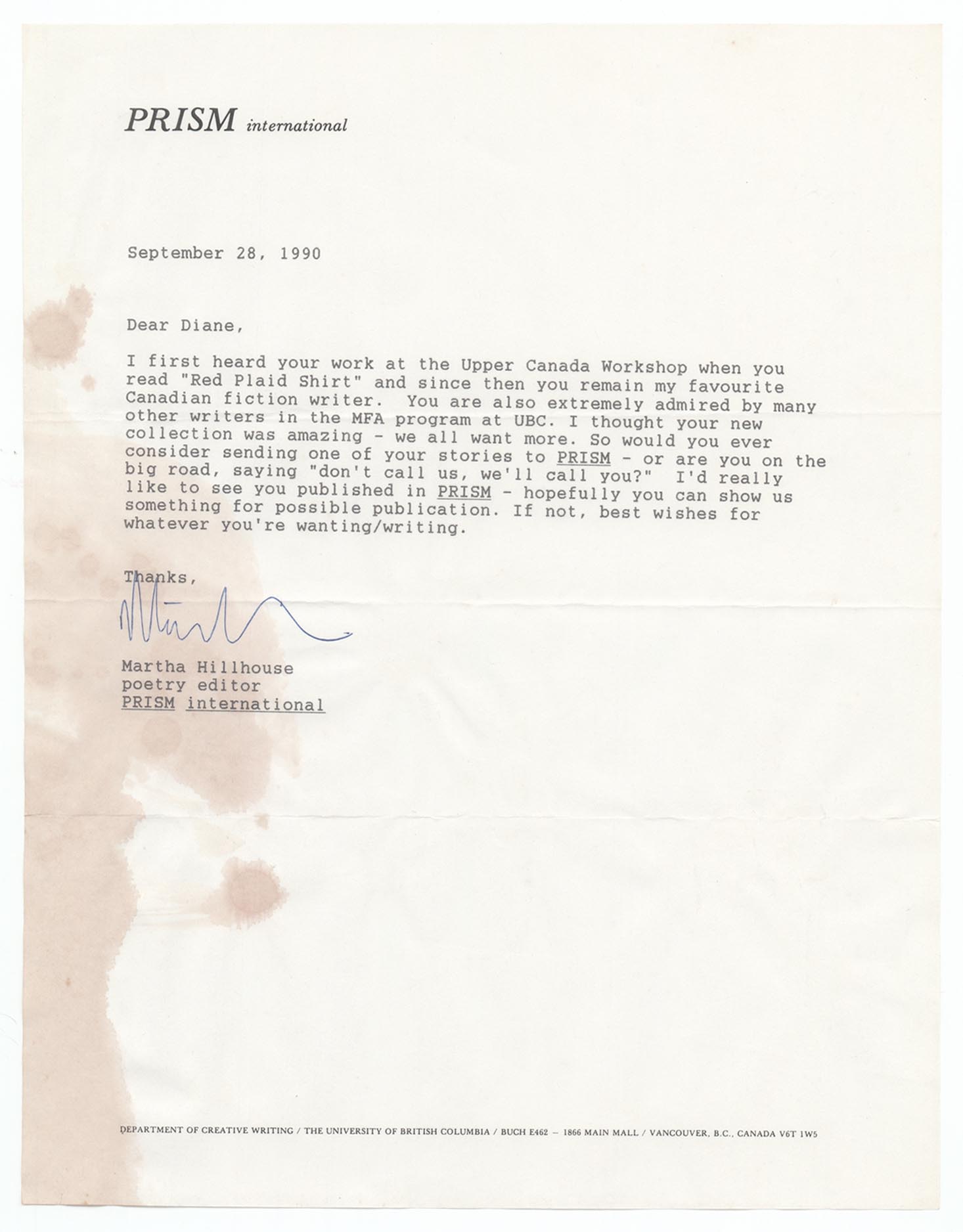 for example, Prism International (University of British Columbia’s creative writing journal) rejected her manuscript for the short story “Body No. 15,” stating that it was not “successful.” By 1990, however, Prism editors were asking Schoemperlen to submit pieces for publication, asking: : “would you ever consider sending one of your stories to Prism – or are you on the big road, saying ‘don’t call us, we’ll call you?’” And the previously rejected ‘Body No. 15’ was eventually published by Descant in February 1975.

In addition to the variety of magazines and journals that published her work over the past three decades, Schoemperlen has also been affiliated with several 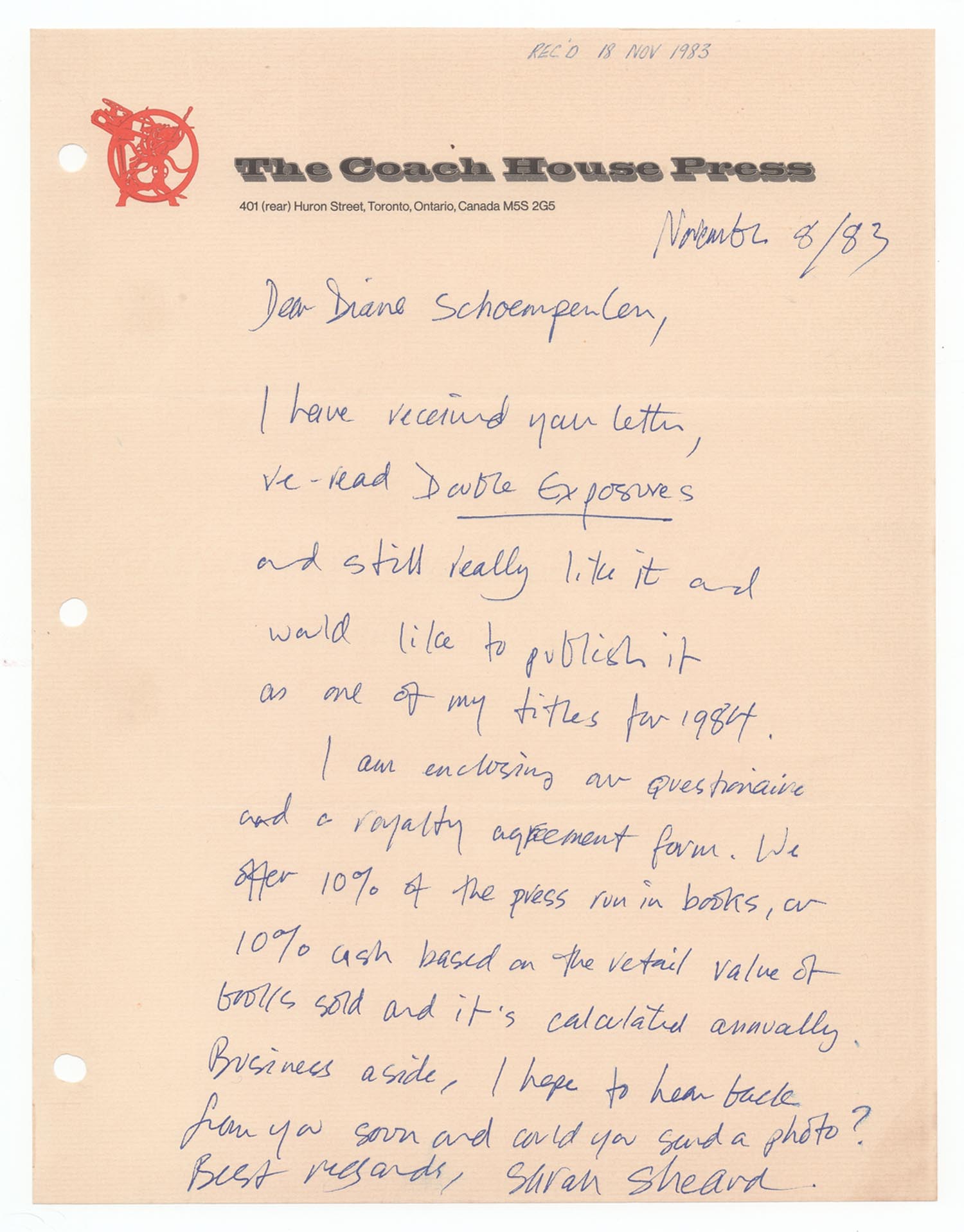 Canadian publishing houses, beginning with Toronto’s Coach House Press, which put together her first book of short stories and photographs, Double Exposures, in 1984; Kingston’s Quarry Press has published two of her other collections, Frogs and Other Stories (1986) and Hockey Night in Canada (1987); Macmillan of Canada published her fourth work, Man of My Dreams (1990). Schoemperlen then moved to HarperCollins, which published In the Language of Love (1994), as well as Forms of Devotion (1998) and At a Loss for Words (2008); her novel Our Lady of the Lost and Found (2001) and short story collection Red Plaid Shirt (2002) were also published by Harper, under their Flamingo imprint. Finally, her 2002 compilation, Names of the Dead: An Elegy for the Victims of September 11 was published by Viking.