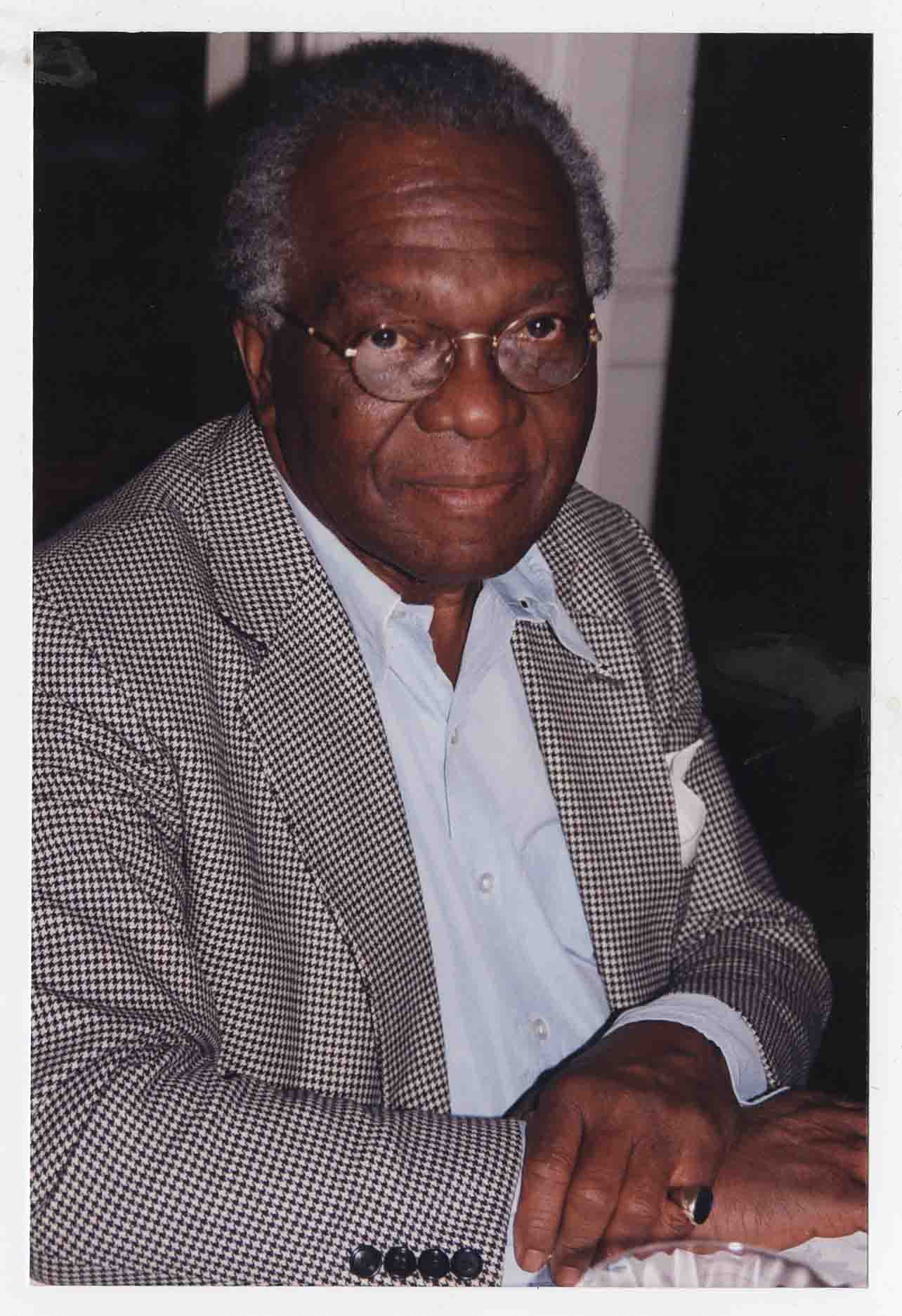 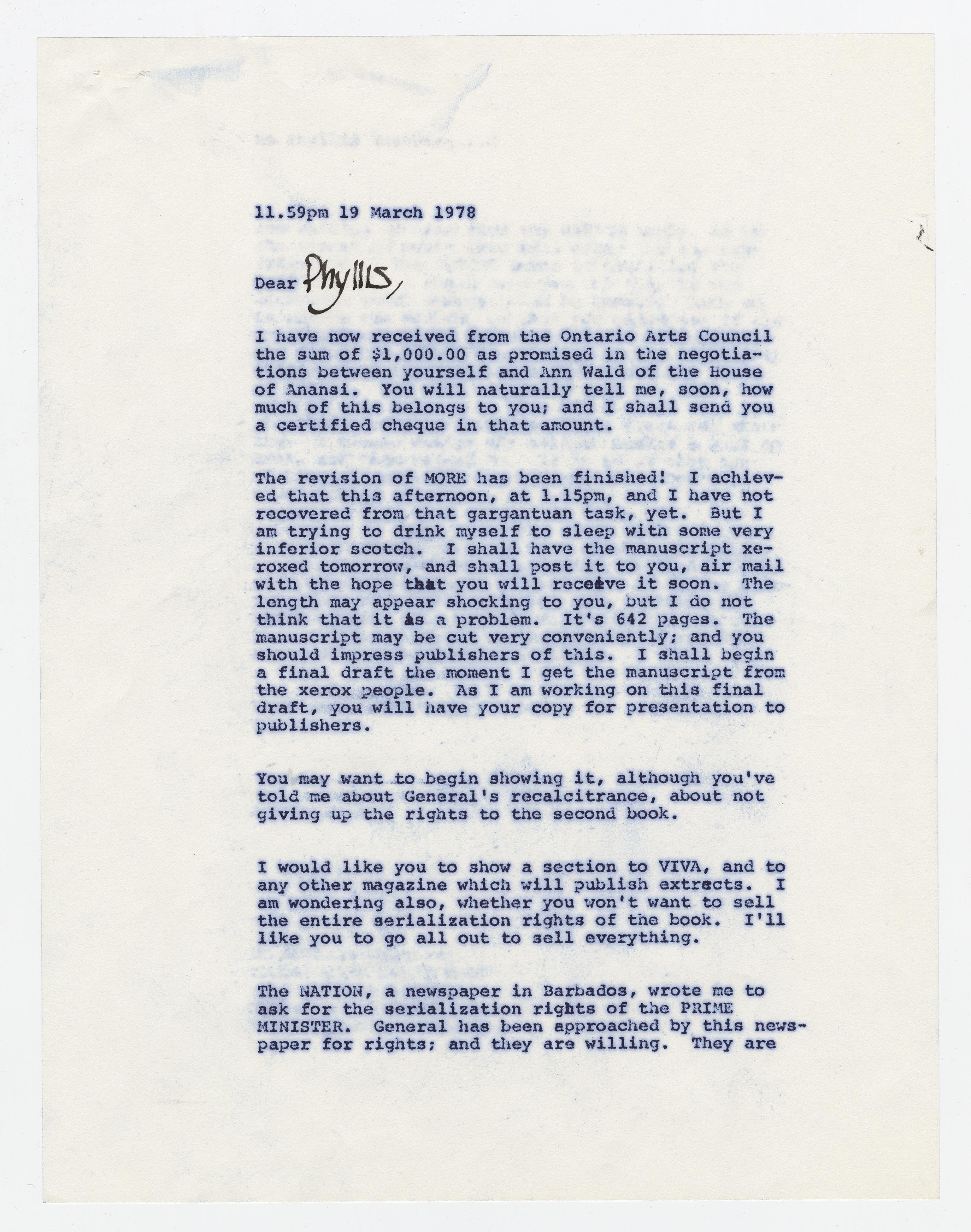 professor at Yale, the University of Texas, and Duke University and having managed the Caribbean Broadcasting Corporation for a year, Clarke returned to Toronto in 1977 and began writing novels once again. Clarke’s first draft of More was completed in 1978 and focused on the lives of Mack, a Scottish-Canadian woman, her husband, and their circle of Rosedale friends and socialites. A few days after finishing the draft, Clarke wrote to his agent, Phyllis Westberg, of Harold Ober Associates: “The revision of MORE has been finished! ... The length may appear shocking to you, but I do not think that it is a problem. It’s 642 pages.” A few weeks later, Clarke wrote again to Westberg describing how he had spent his day “doing not one damn thing, drinking scotch, and dreaming of the millions that will flow 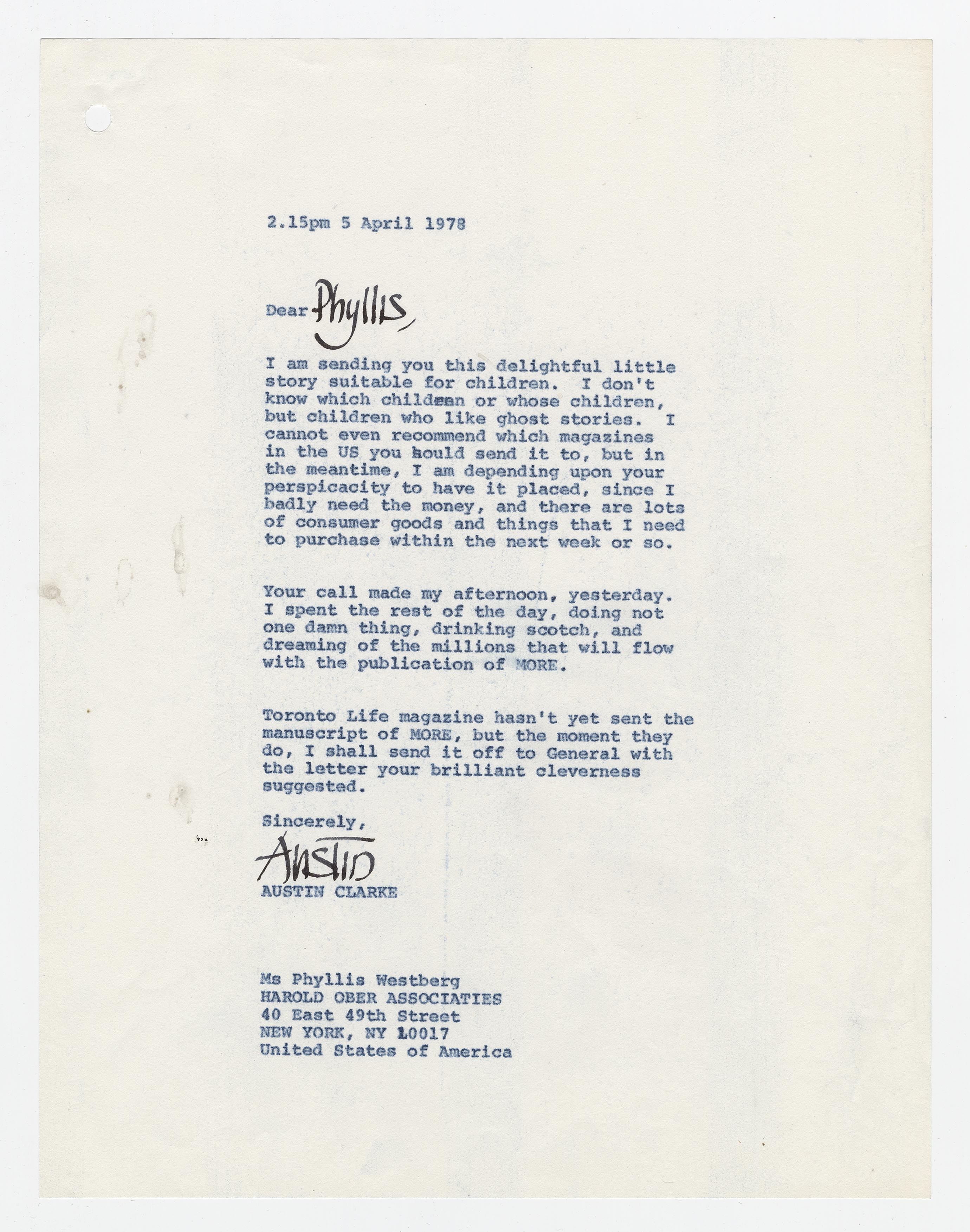 with the publication of MORE.” The fulfilment of the dream would have to wait some time, however, as More was declined by every editor who read the first draft. Even after Clarke’s revisions in June 1978, the manuscript was again rejected. Neil Nyren of Atheneum Publishers preceded his long and detailed rejection letter by wondering, “ Oh dear, what’s happened to Austin Clarke?” Nyren ended with the prophetic statement: “I think it’d take an enormous amount of work to get this into shape.”

Despite further revision, the manuscript was consistently rejected. Westberg 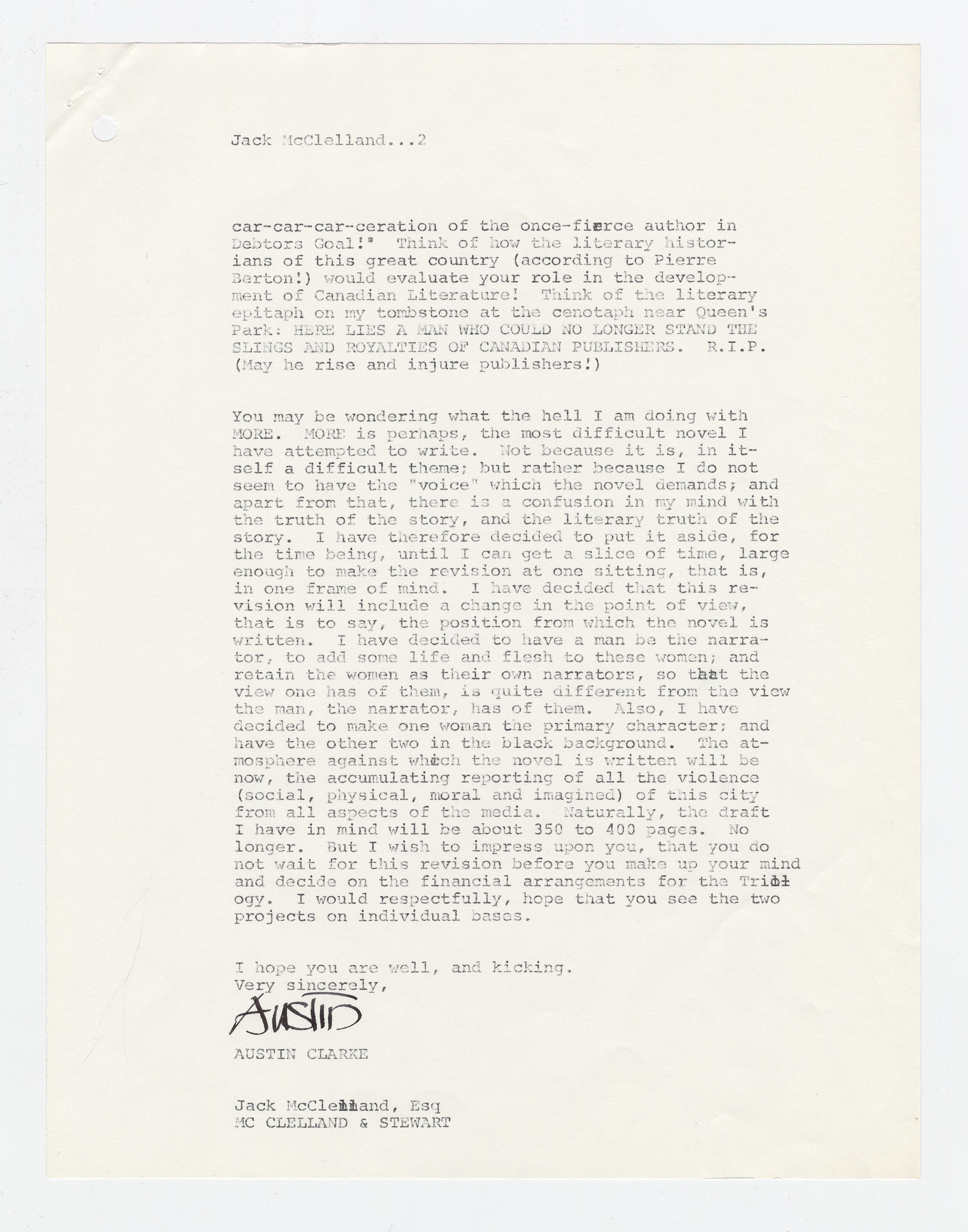 wrote to Clarke in February 1979: “Actually Austin, I’m not at all sure you should spend time on revising MORE. As I told you, there’s a strange lack of emotion in that book that is very unlike you ... I think you should seriously consider dropping it.” Clarke’s frustration is palpable in a March 1979 letter to Jack McClelland in which he confesses: “MORE is perhaps, the most difficult novel I have attempted to write ... because I do not seem to have the ‘voice’ which the novel demands.”

Westberg’s sentiments would be echoed a year later by senior McClelland & Stewart (M&S) editor Lily Miller. In a two-page letter she titled, “My thoughts on MORE by Austin Clarke,” Miller stated: “The first approximately 400 pages were painful to read” and observed that all the characters’ “mansions, cars, penthouses and affairs cannot compensate for shallow people bored with 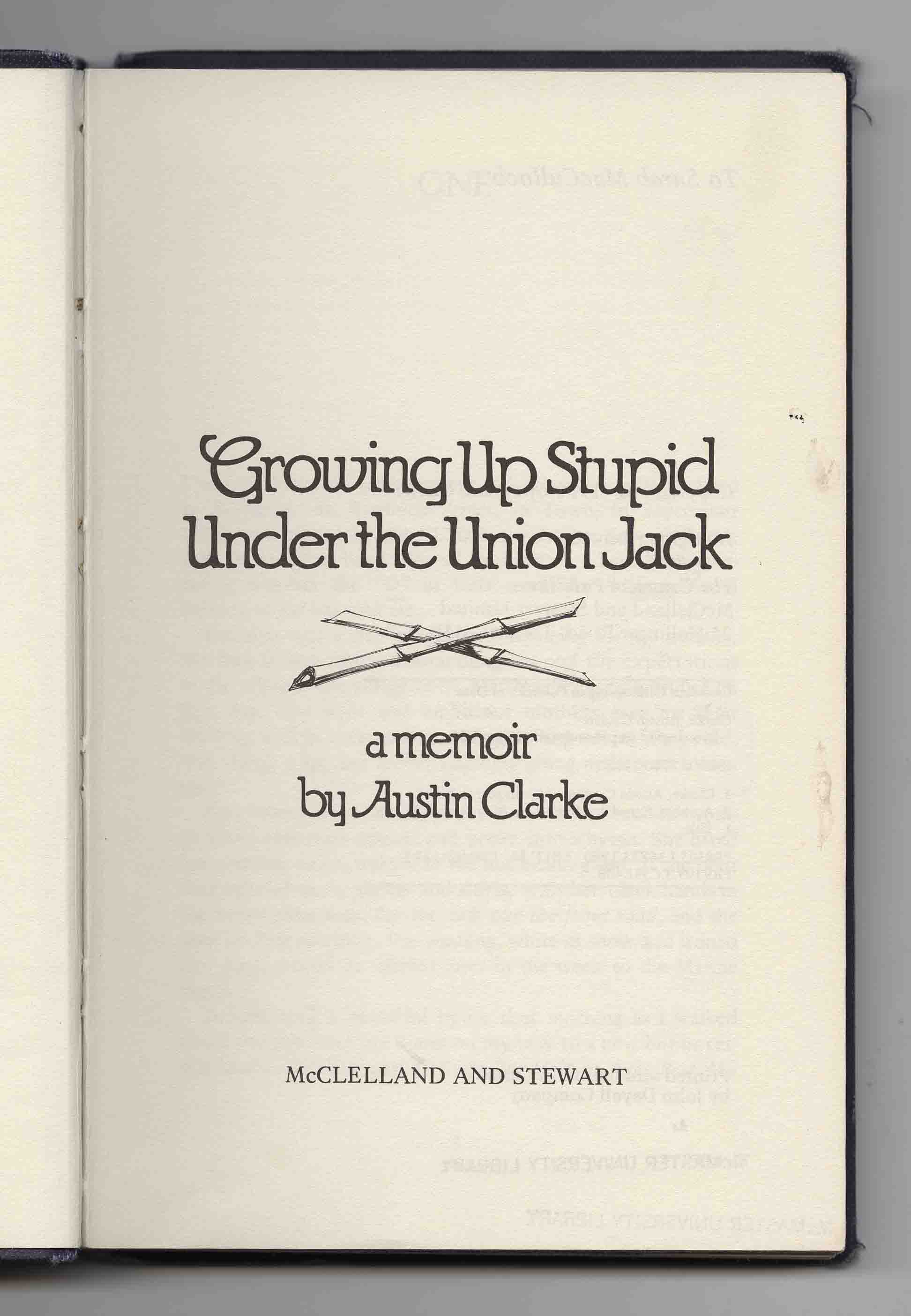 themselves and boring to the reader.” She ended with advice to the author: “I think, Austin, that a compassionate view of your main character, Mack, will give you a rich and meaningful book. This is what will be impressive – not the fancy cars and penthouses. And this is where your strength and uniqueness as a writer lies.”

After the resounding rejection of the novel, Clarke abandoned the manuscript for many years. In the 1980s he published the quasi-autobiographical book, Growing Up Stupid Under the Union Jack, as well as two collections of short stories, When Women Rule and Nine Men Who Laughed. Towards the end of the 1980s, however, Clarke revisited More. In the first revisions, Clarke still focused the plot on Mack but added material relating to a domestic worker, Ann, and her circle of 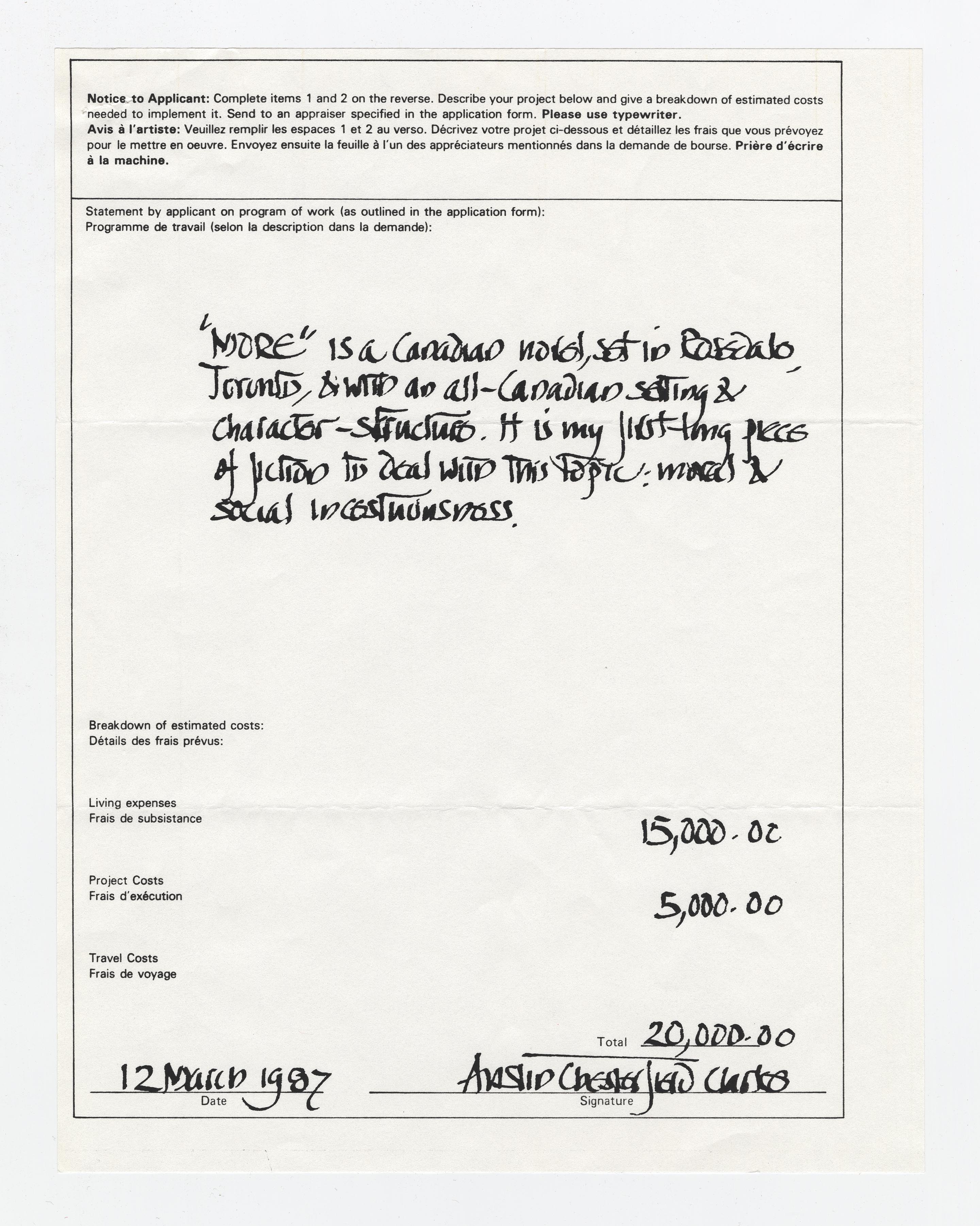 West Indian immigrant friends. He also included references to Albert Johnson, a Jamaican man who was killed by Toronto police in 1979. Johnson’s story would become a significant part of More in all subsequent drafts. In 1987 Clarke applied (with the support of Lily Miller) to the Canada Council for $20,000 to complete More. In the unsuccessful application, he describes the novel as having “an all-Canadian setting & character structure” and as his “first long piece of fiction to deal with this topic: moral and social incestuousness.” This version of the novel was considered by M&S during Adrienne Clarkson’s brief stint as president and publisher in the late 1980s. Clarke recounts that although the manuscript sat at M&S for some time, it was finally declined.

Throughout the late 1980s Clarke revised More; a painstaking process that he describes in many letters to his friends Andrew Salkey, Sam Selvon, and John Harewood. In a 1987 letter to Harewood, Clarke writes: “I struggling through a novel, by the nomenclature o’ MORE ... this book brekking my arse ... Um is lashes, Harewood.” A month later Clarke writes a more 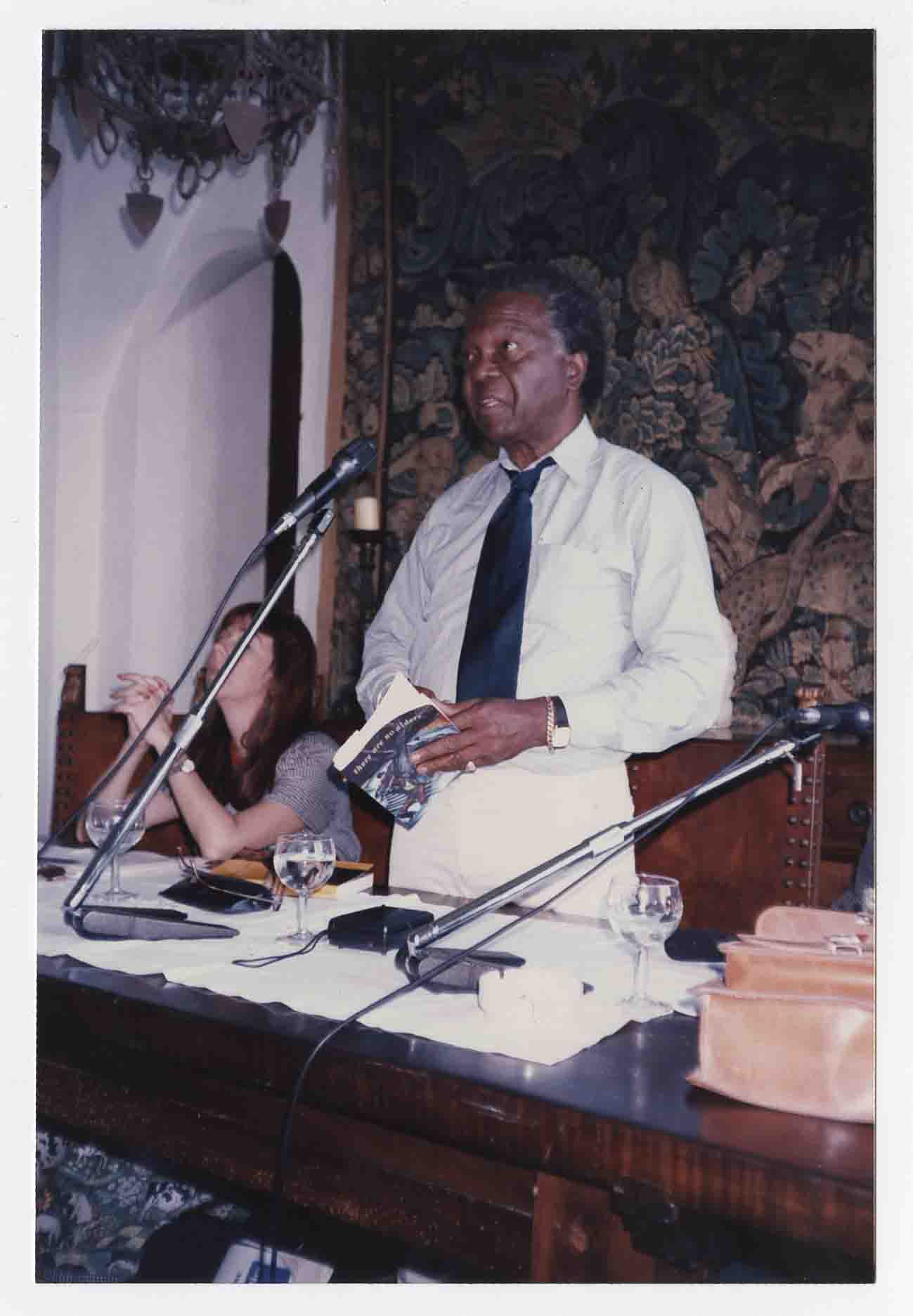 optimistic letter to Selvon: “I will have MORE lick-down, in first draft by the end of the month. I already have April as my deadline. Deadlinesare [sic] like women: they change from day to day.”

In addition to the deadlines, the plot and title of More changed significantly in this period. By 1988 Clarke had largely dropped the story of Mack and the Rosedale socialites, focusing on the community of domestic workers with a new main character named May. Clarke also changed the title of the novel to I’m Running for My Life, before reverting to More at the suggestion of his friend Andrew Salkey. This draft of the novel was finished in November 1990 and focused on May as well as her son BJ and his friend Marco. After receiving the novel in December 1990, Phyllis Westberg wrote Clarke with the positive reaction: “I think MORE is splendid. It’s very compelling and flows beautifully.” Despite her high hopes for this newest draft, publishers were still unwilling to take on the project, and by early 1991 Clarke was revising the novel yet again. Perhaps frustrated by the publishers’ reluctance to take on More as a whole novel, Clarke 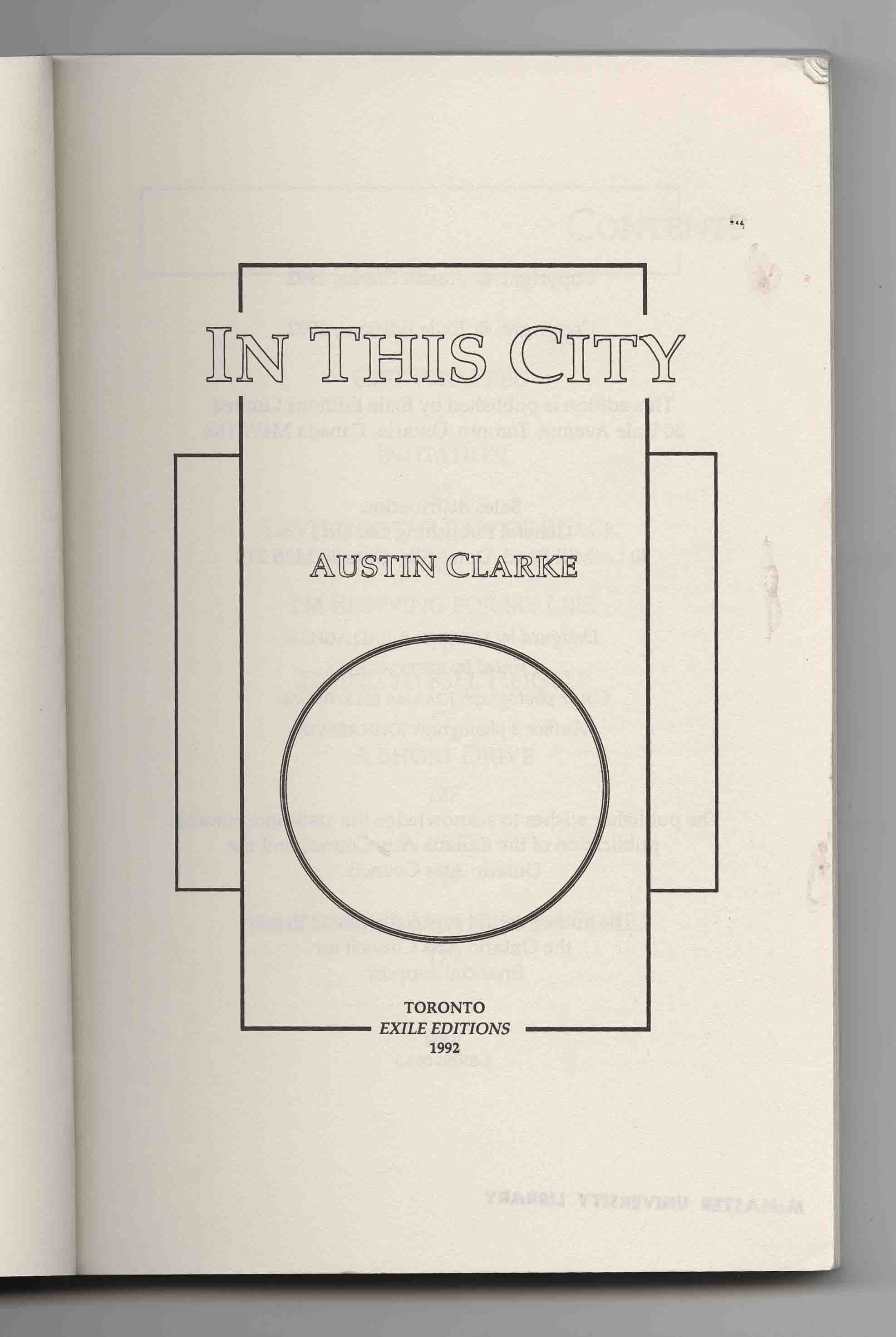 cut portions from the manuscript and released them, along with other stories, as a collection of short stories under the title In This City published by Exile Editions in the fall of 1992. Many stories in this collection were taken directly from drafts of More, including “I’m Running For My Life” and “Sometimes a Motherless Child.”

During the early 1990s Clarke worked as a member of the Canadian Refugee Board, and although his creative output slowed considerably, he continued to work on More. After publication of his widely-acclaimed novel, The Polished Hoe (Thomas Allen, 2002), Clarke returned to More, committed to finally getting the novel published. His 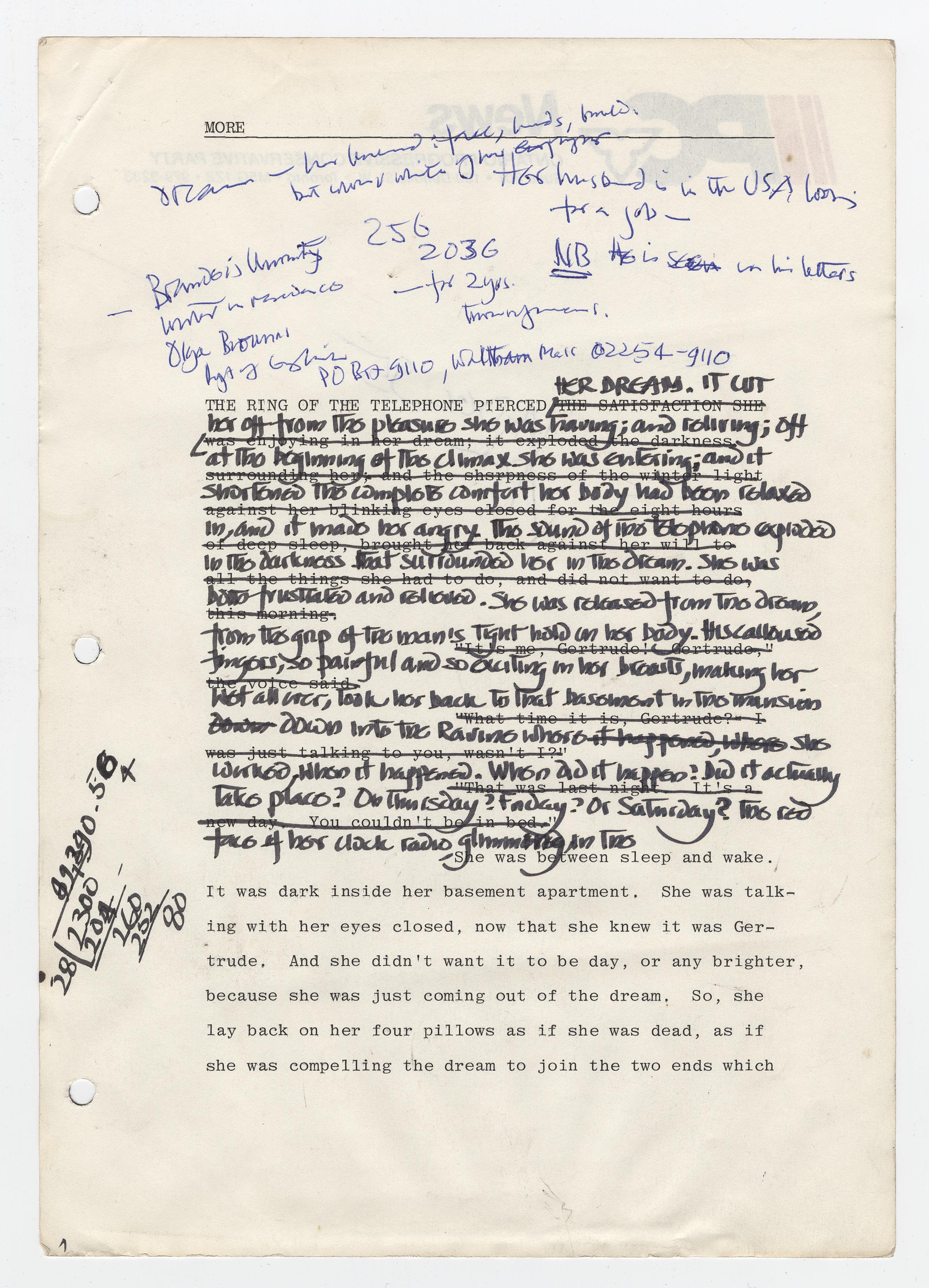 revisions focused on the character of May, now renamed Idora, while her son and his father became marginal presences (this marginalizing of male characters was reflected in Clarke’s consideration of another title for this most recent iteration of the novel: “Where Are the Men?”). Yet, despite the awards and accolades Clarke received for The Polished Hoe, the manuscript for More underwent seven further revisions and Clarke’s editor insisted that he change the conclusion of the novel. Clarke still maintains that his original ending, in which Idora reacts to BJ’s murder with a mixed sense of uncertainty, sadness, and relief, is the more powerful conclusion. 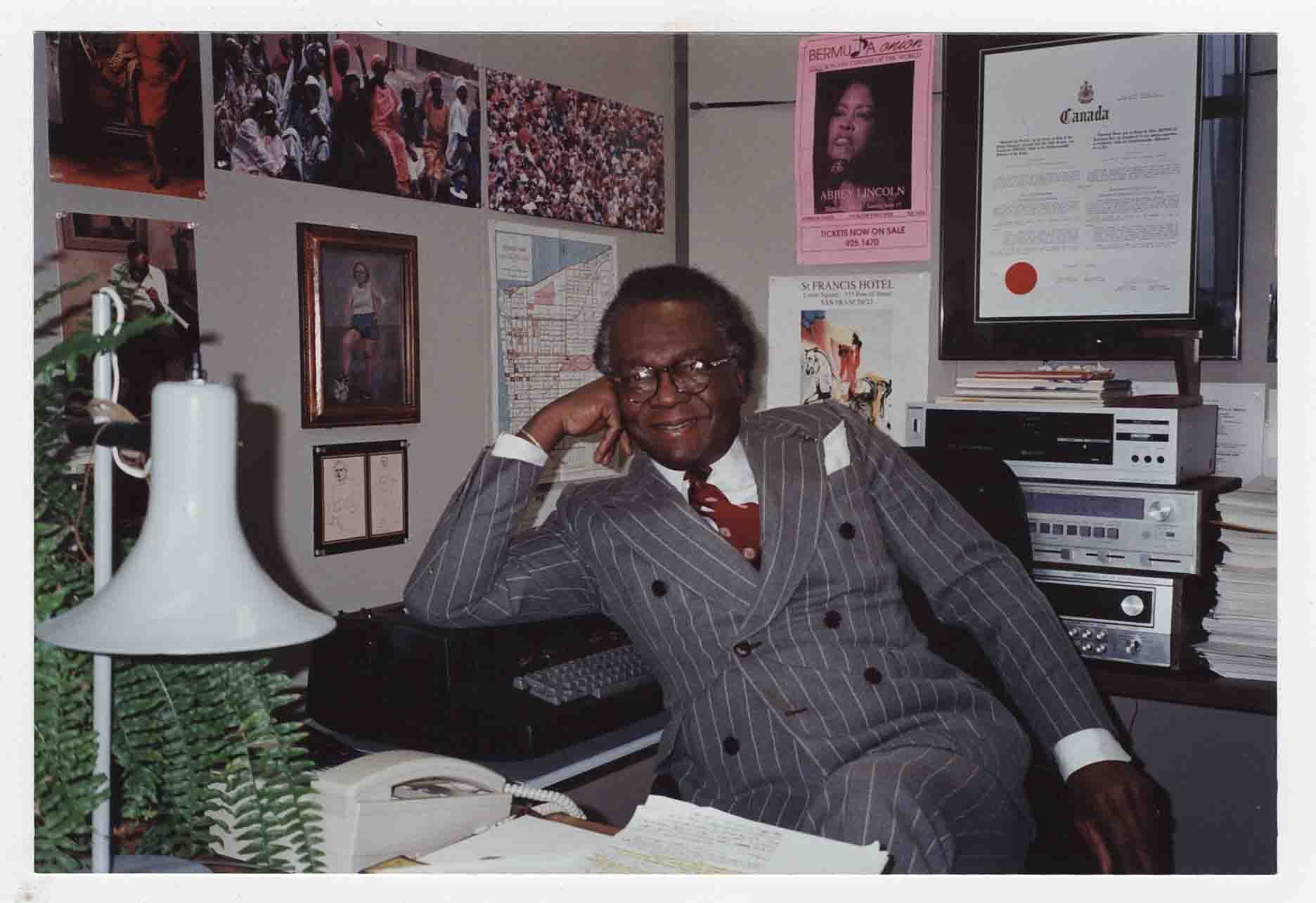 After thirty years of seemingly-endless revising and editing, More was finally released by Thomas Allen in Canada in the fall of 2008 to strong reviews and sales. Quill and Quire raved that “More may stand as one of the crowning achievements of Clarke’s career." Sonnet L’Abbé, in her review for the Globe and Mail wrote with great accuracy that “It took 40 years for early predictions of [Clarke’s] future literary stature to come true - perhaps because it took the reading public that long to understand, or to want to hear, the force of his social critiques.” More was published in Australia and the United States in 2009. While it has yet to generate the millions of dollars that Clarke dreamt of in 1978, More finally found a Canada that was ready to read this powerful novel.