Originally formed as a collective in 1981, Garamond Press was the first Canadian-owned book publisher to focus on the university and college market. The Press was established as an alternative to traditional university presses and mainstream multinational textbook publishers and became one of Canada’s foremost independent academic publishers.

Toronto-based Garamond Press was created as a result of a unique collaboration between two independent Canadian collective presses —Between the Lines and Women’s Press —and Fernwood Books which was a sales agency representing Canadian publishers in the college market. Another founding partner was Muskox Press, the owner of a printing shop. In 1980, Between the Lines was described as a “three-year-old book publishing partnership between the Development 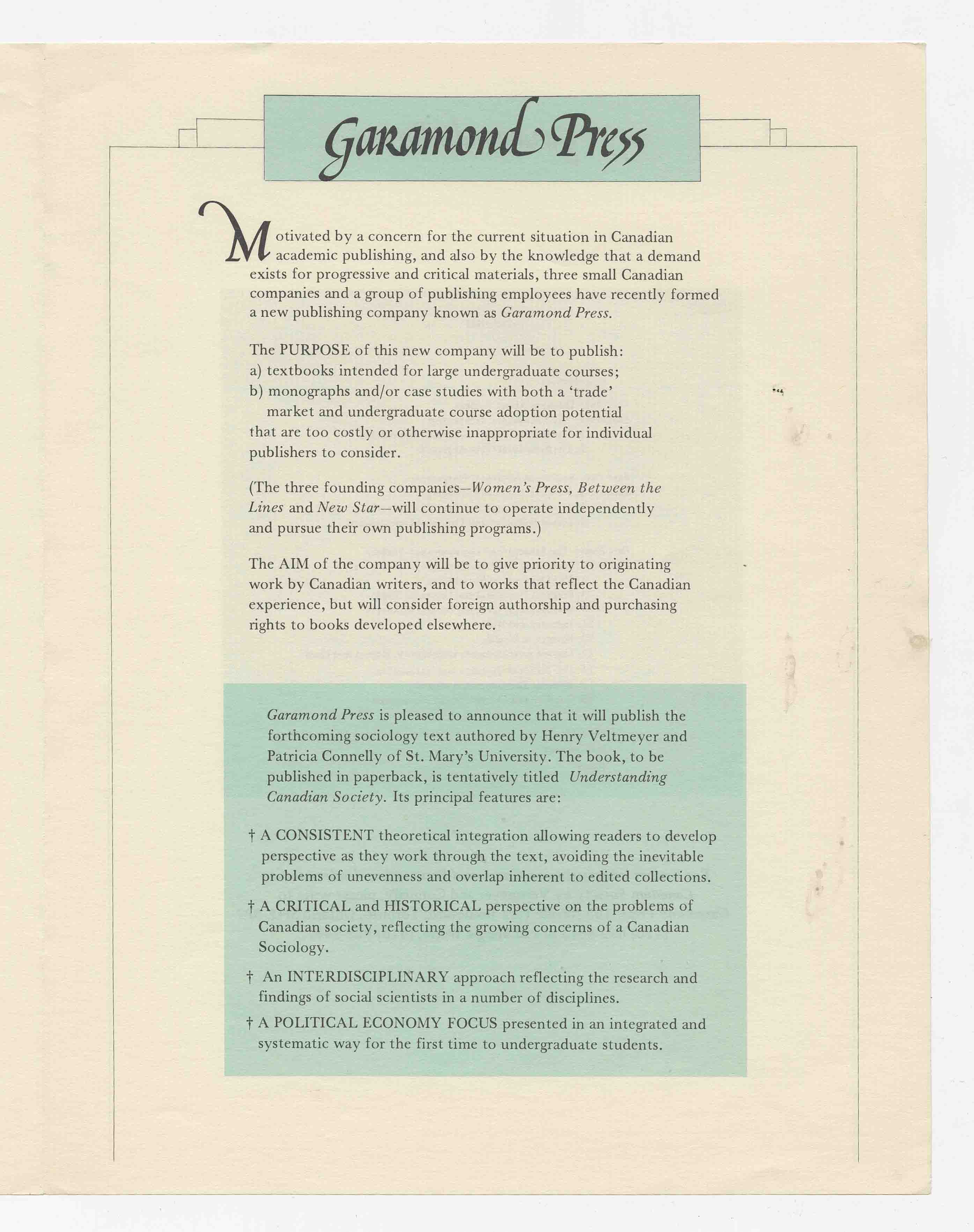 Education Centre and Dumont Press Graphix” which had both operated for about nine years. In September 1980, the partners discussing a consortium with Between the Lines were the Women’s Press, New Star Books (“a west-coast radical press in operation for over five years”), and Errol Sharpe, Peter Saunders and Olino Cappacione as CSS Associates. All four groups were experienced in the publishing field but not in the area of university textbook publishing; nor did any of them individually have the funds required to develop a publishing program for university texts. The expanded Fernwood Books was in the mix because it was a “good sales and marketing component” for the consortium. (Sharpe and Saunders were also associated with Fernwood Books.) The consortium was legally incorporated as Portcullis Publishing in Toronto. At a board of directors meeting on 8 May 1981, the working name Garamond Press was chosen. Garamond announced its arrival to the world in a press release dated June 1981. The original company directors were: Brenda Roman, Lois Pike (Women’s Press) Errol Sharpe, Peter Saunders, (Fernwood Books), Richard Swift and Michael Kelly, (Between the Lines). 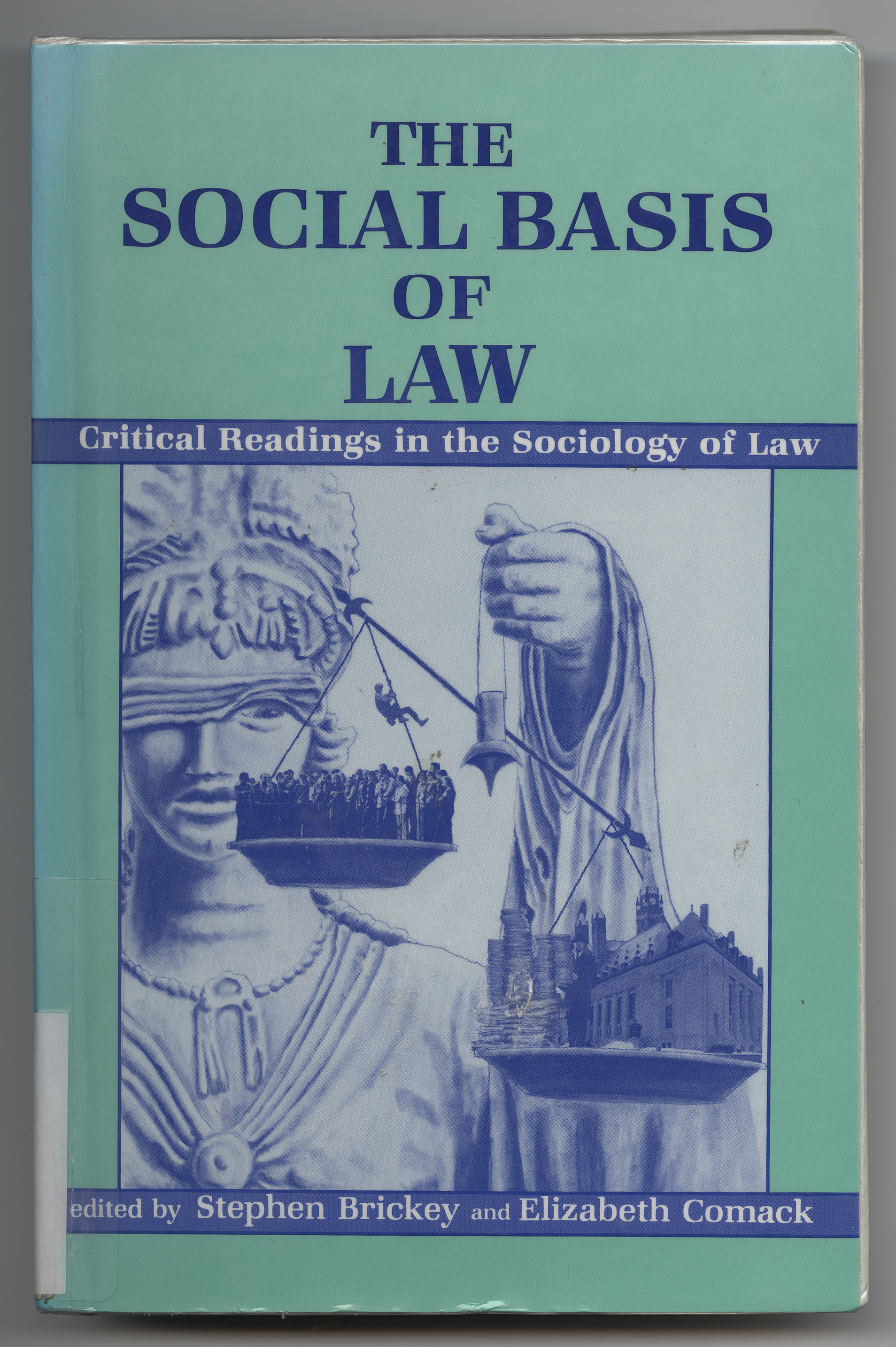 The founders were conscious of the need for a progressive, critical, and Canadian-controlled sector in college level publishing. Those involved with Garamond Press wanted to see an end to what they considered a truncated market process, one in which the more profitable sector was entirely relinquished to multinationals. Garamond’s mandate was, therefore, to provide academics, students, and the public with an alternative to multinational textbook publishers and university presses, publishing critical works in the social sciences derived from original Canadian research.

Many notable works were published over the years, including Through the 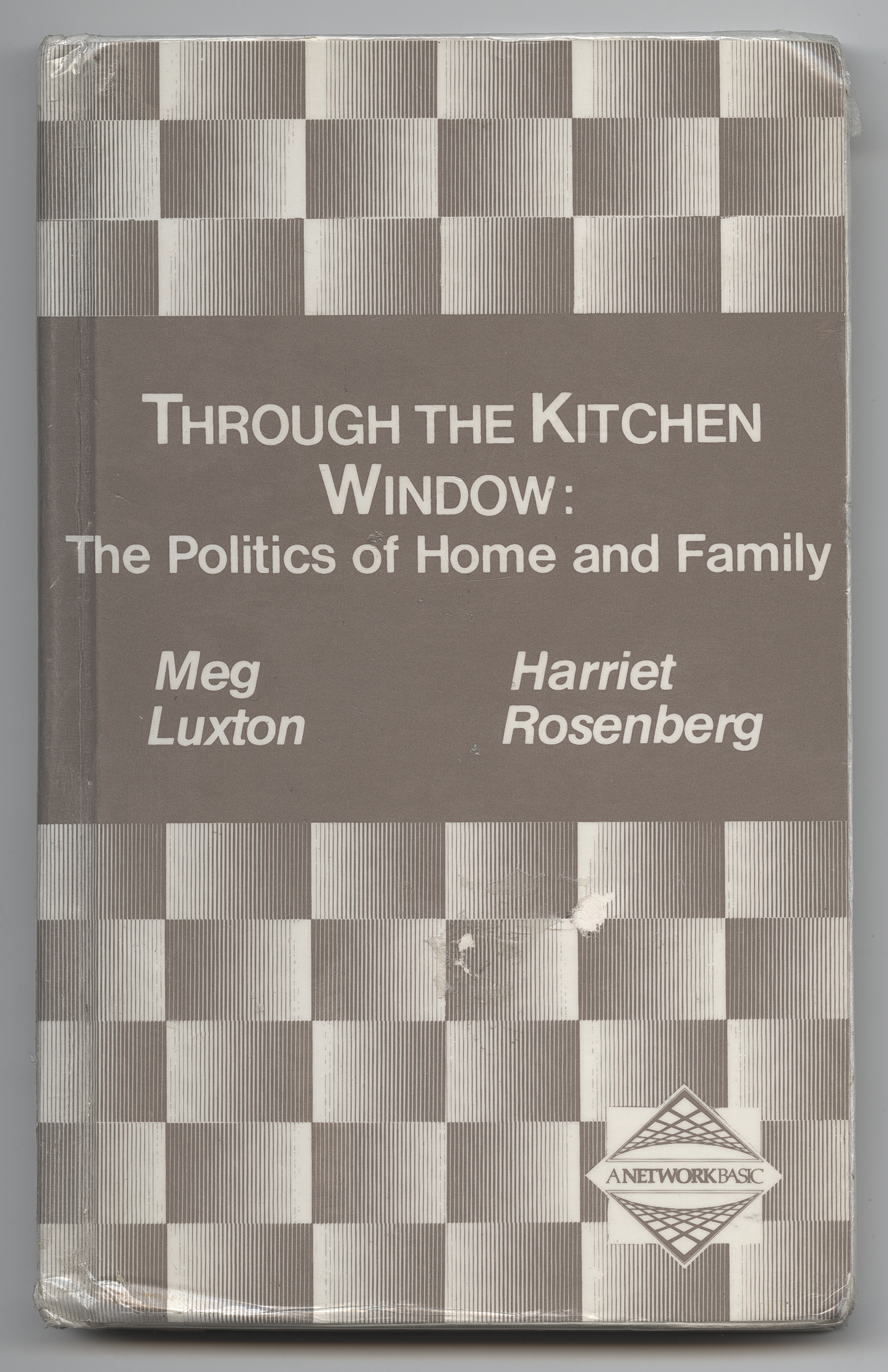 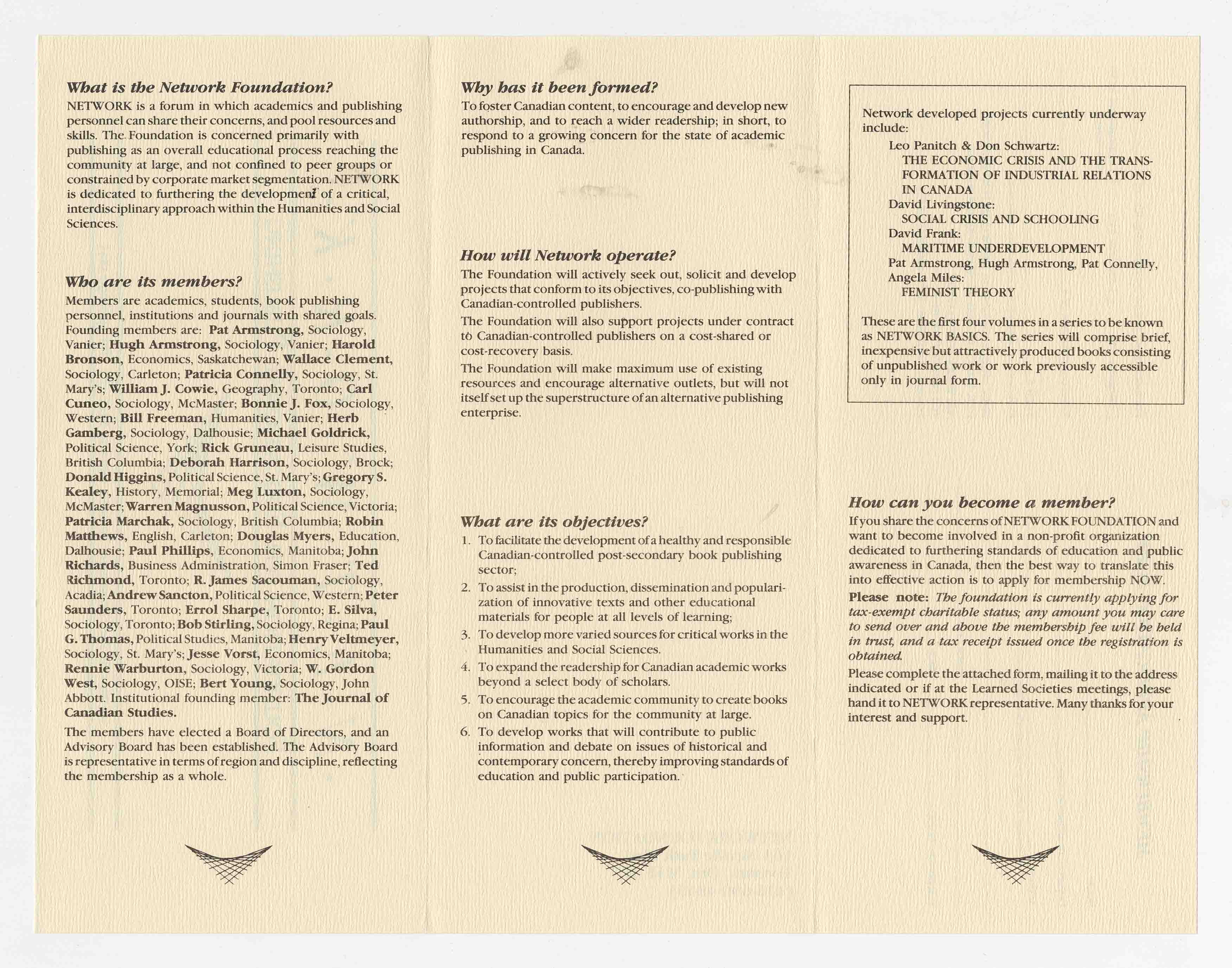 The Network Foundation for Educational Publishing was founded in 1981 to promote the new publishing venture to the academic community and secure funding from granting agencies. A promotional leaflet stated that the Foundation’s aim was “to foster Canadian content, to encourage and develop new authorship, and to reach a wider readership – in short, to respond to a growing concern for the state of academic publishing in Canada.” Setting up a foundation for this purpose meant charity status: donors to the foundation could be issued tax certificates. Supporters comprised approximately 300 academics from across Canada. The Foundation and Garamond Press developed a successful series of concise leading-edge critical social science books known as Network Basics. These were relatively short, inexpensive paperbacks dealing with contemporary and historical issues concerning Canadians. The idea for the series came out of a general feeling, derived from conversations with professors across the country, that existing textbooks were 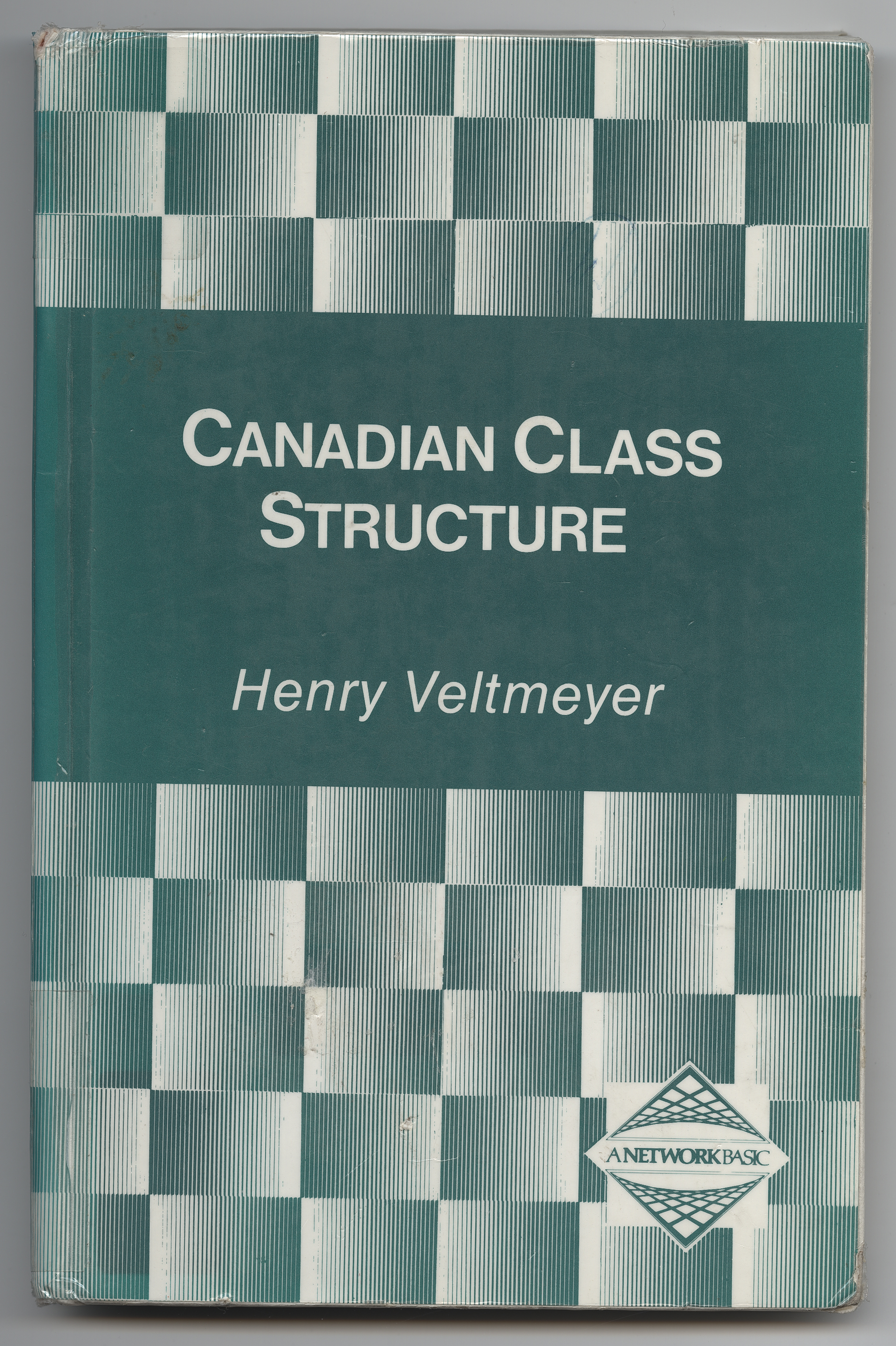 inadequate. Attached to this undated document setting out the intent of Basics is a list of six books proposed for a spring launch. Of those six, three were published in 1985 with altered titles. Network Basics stopped publishing in 1990. It should be noted, however, that a series known as Fernwood Basics continues, at time of writing, under the Fernwood Publishing imprint under the direction of publisher Errol Sharpe.

Garamond’s significance in the history of Canadian publishing is clear: it was the first independent Canadian publisher to specialize in publishing for the post-secondary market. It developed out of a true spirit of cooperation amongst small presses and academics. Garamond Press was sold in 2005 to Broadview Press, and at time of writing (2009) continues as an imprint of the University of Toronto Press.