Harvest House was a small English-language publishing house established in 1960 by Maynard and Anne Gertler in Montreal. At one time it was the most important English-language publishing house in the province. May Cutler, founder of the successful children’s press, Tundra Books, told Montreal Gazette reporter Joe Fiorito, that Maynard Gertler ran his business “like a one-man university press,” focusing on intellectually rigorous books pertaining to politics, history, and the environment. Most importantly, Harvest House produced English-language translations of the works of Québécois intellectuals, academics, novelists, and poets, fostering a significant cultural exchange within Canada.

The primary undertaking of Harvest House was to bring the literature of Quebec’s Quiet Revolution to English-speaking Canada. With this mandate, the press’s first book was journalist Pierre Laporte’s The True Face of Duplessis (1960), translated by Richard Daignault. As Maynard Gertler states in his introductory “Editor’s Note,” the book was published with the hope that “many English-language readers may find themselves penetrating for the first time the intimate 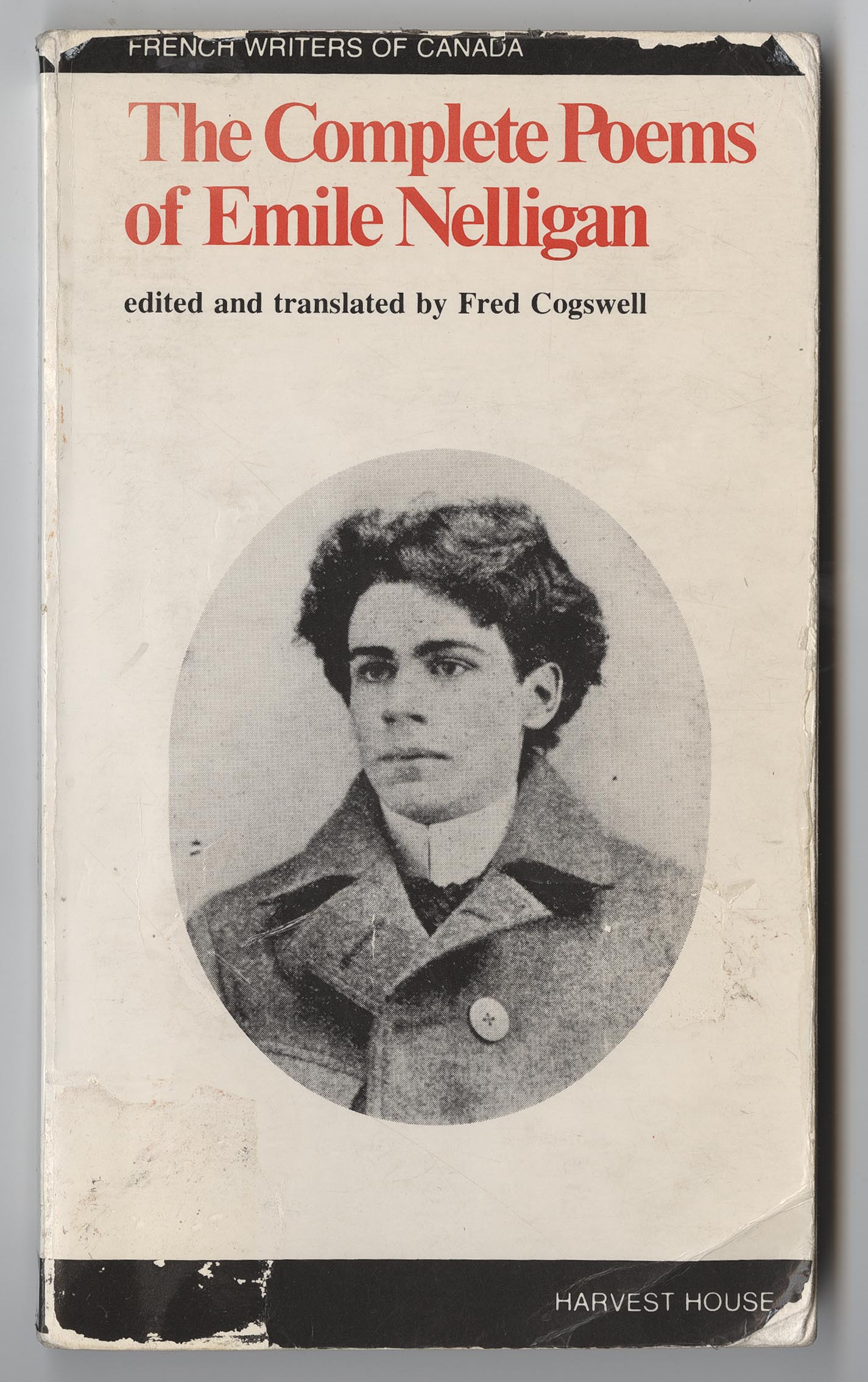 yet fiercely passionate world of Quebec politics.” (Laporte became a politician and was vice-premier and minister of labour and immigration for Quebec when; he was kidnapped and murdered by the Front de libération du Québec in 1970.) Harvest House claimed many other firsts, such as the first English translations of the complete poems of Émile Nelligan (1879-1941), translated by Fred Cogswell and published in 1983; and the writings of Frère Untel (“Brother Anonymous”), the pseudonym of Brother Pierre-Jérôme (born Jean-Paul Desbiens, 1928-2006), translated by Miriam Chapin. The Impertinences of Brother Anonymous (1962), after nine editions, became the press’s most financially successful book. 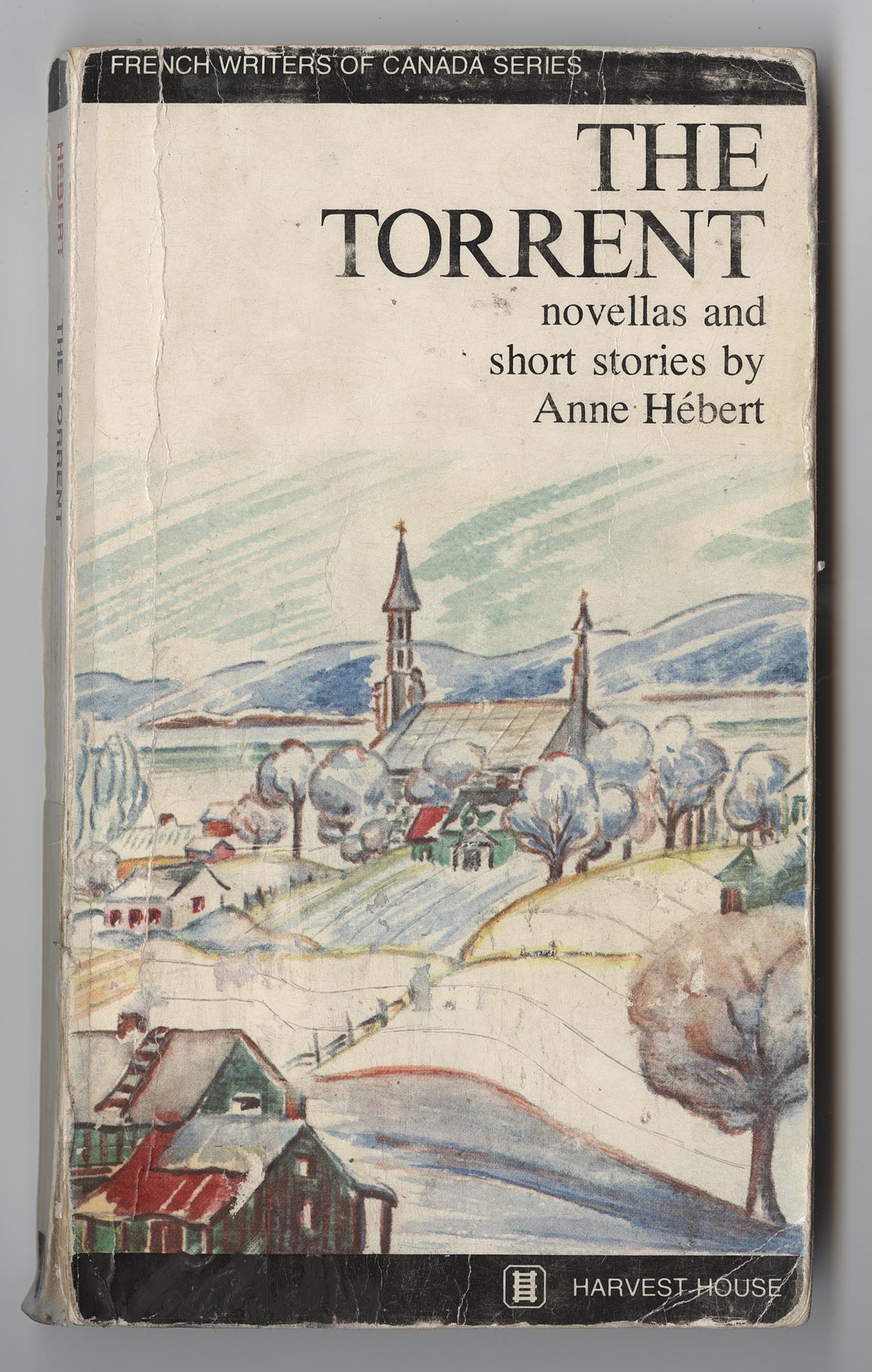 Harvest House had another noteworthy achievement in being the first Canadian press to translate a prose work by Anne Hébert into English. Hébert’s Le Torrent, translated by Gwendolyn Moore in 1973, was an important undertaking. The book of short stories had initially been published privately as no Quebec publisher was willing to take a risk on the dark and sometimes violent content of her stories. Despite the shock of the French-reading public, Harvest House recognized the importance of this book, which Heather Elder notes “marked a turning point in Quebec’s intellectual and political life, heralding the transformation of the ‘Canadien français’ into the ‘Québécois.’” 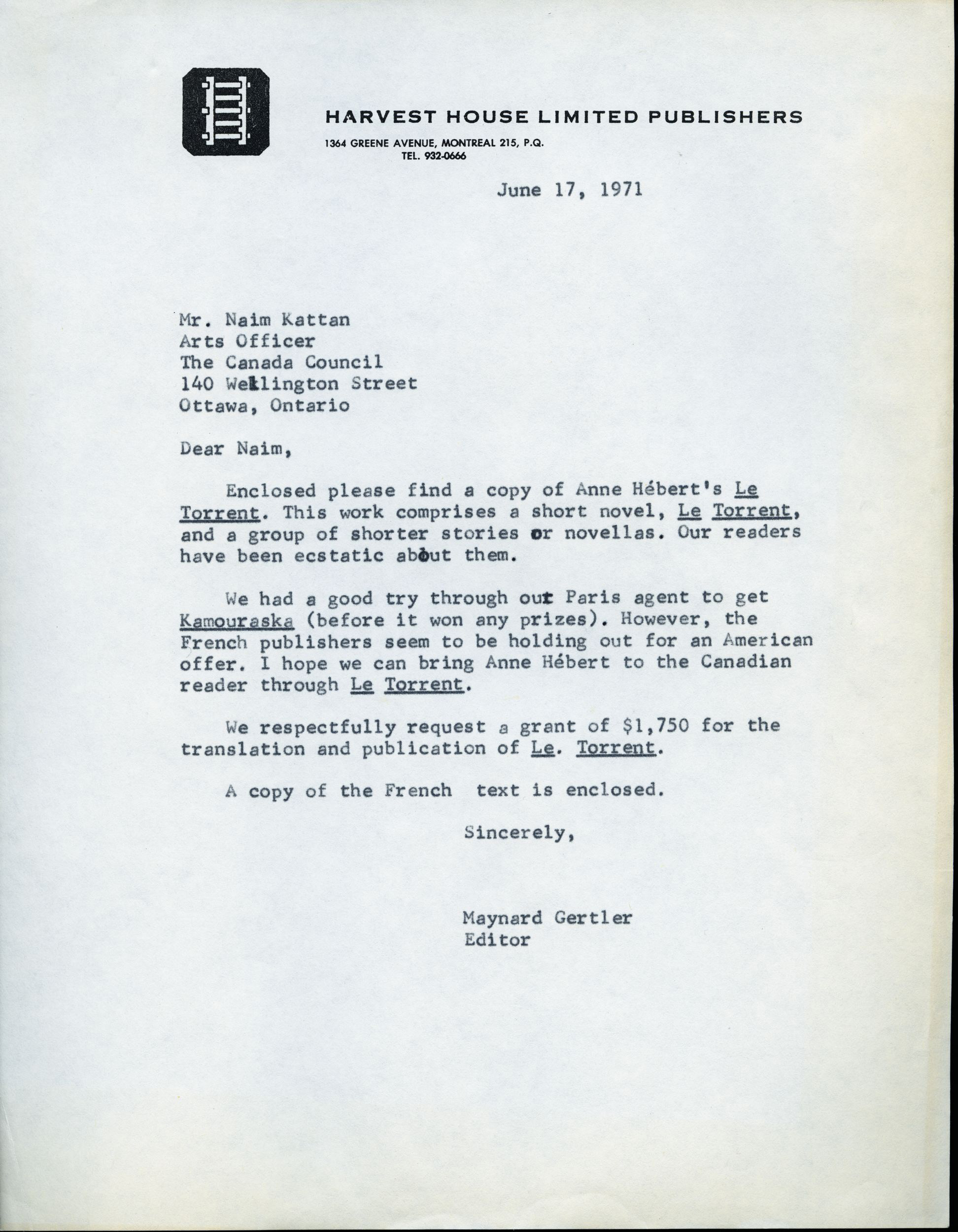 Unfortunately, the translation of Hébert’s stories was not particularly well reviewed as it was thought to be too literal, losing much of the charm and nuance of the original texts. Despite this assessment, publication of this book in English helped establish Hébert as a prominent Canadian writer outside Quebec. She is now the most translated Québécois female author: approximately ninety percent of her work has been published in English. 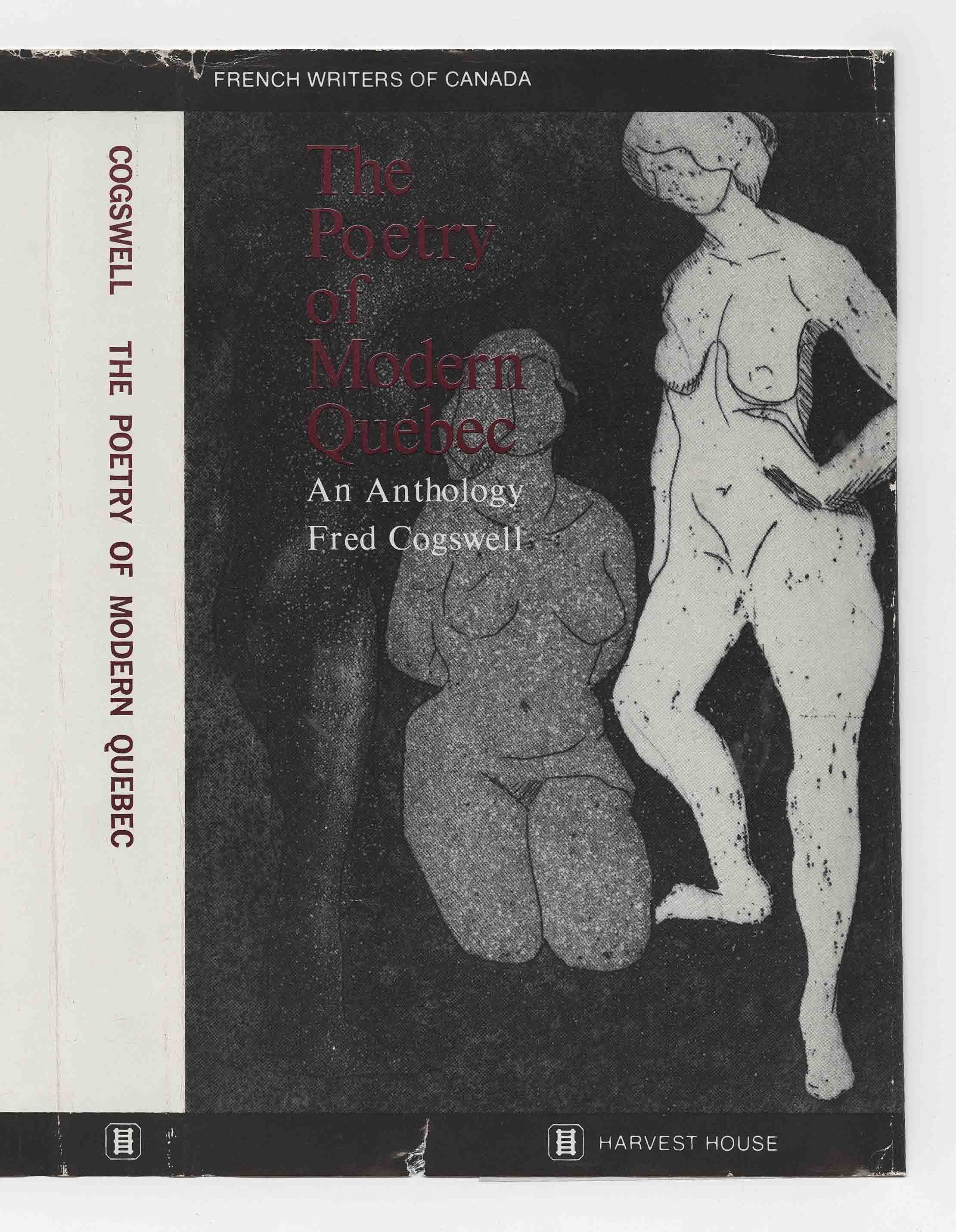 translate, but also for the manner in which they approached the production side of the business. Although they received some funding, much of the early translation work was carried out prior to the inauguration of the Canada Council’s translation grants program in 1972. Harvest House was also the only publisher that made a determined effort to produce inexpensive editions of translated works, intended for the mass market and not as specialty items. As Philip Stratford notes in his article, “Literary Translation in Canada,” many other Canadian presses supporting translations in the 1960s were larger companies, which maintained a fairly traditional 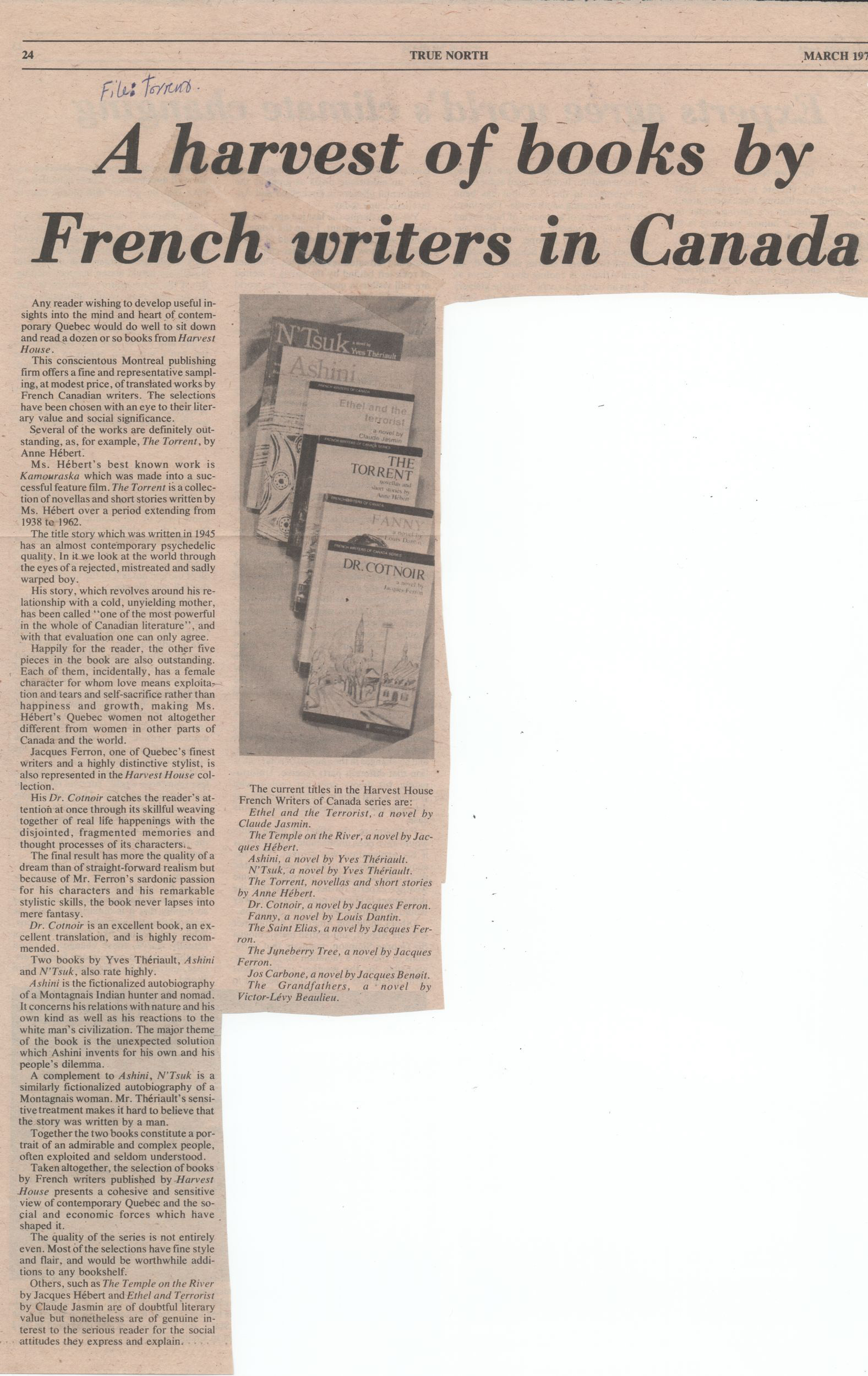 approach to publishing translated works — printing short-run, expensive editions which were considered to be luxury items, or diplomatic or political gestures, which were always perceived as marginal to their main business. In addition to publishing contemporary translations, Harvest House established the “French Writers of Canada” series, and overtly promoted these titles as translations, believing that the translations were integral to both the publishing process and the reader’s literary experience. The list of authors included in this series reads like a “who’s who” of Quebecois writers. The series helped enhance and expand the study of Québécois writers within the burgeoning field of Canadian 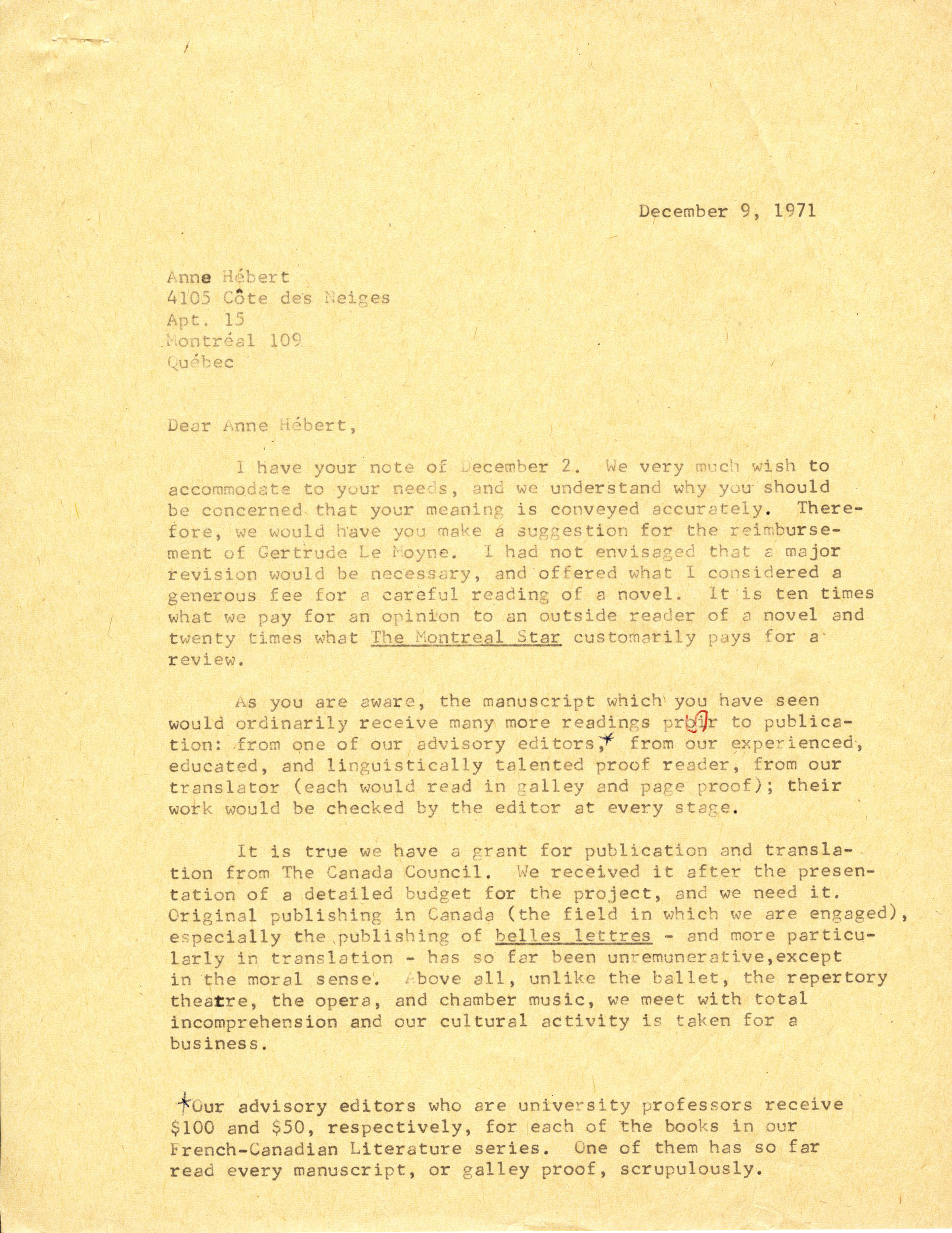 Maynard Gertler sold Harvest House to The University of Ottawa Press in 1995. The sale included 100 titles, 31 of which were still in print. The archives of Harvest House were acquired by Queen’s University in 2008, and include manuscripts, correspondence with authors and translators, financial and business files for the majority of the books that were published by the Press.