Hugh Kane (1911-84) is regarded as one of Canada’s foremost publishers, having held senior positions at both McClelland & Stewart and Macmillan of Canada, two of the country’s most important firms. During a career that spanned some 50 years, he helped lead the companies through difficult financial times, and won the respect of colleagues and authors with business acumen, an even temper, and good humour. 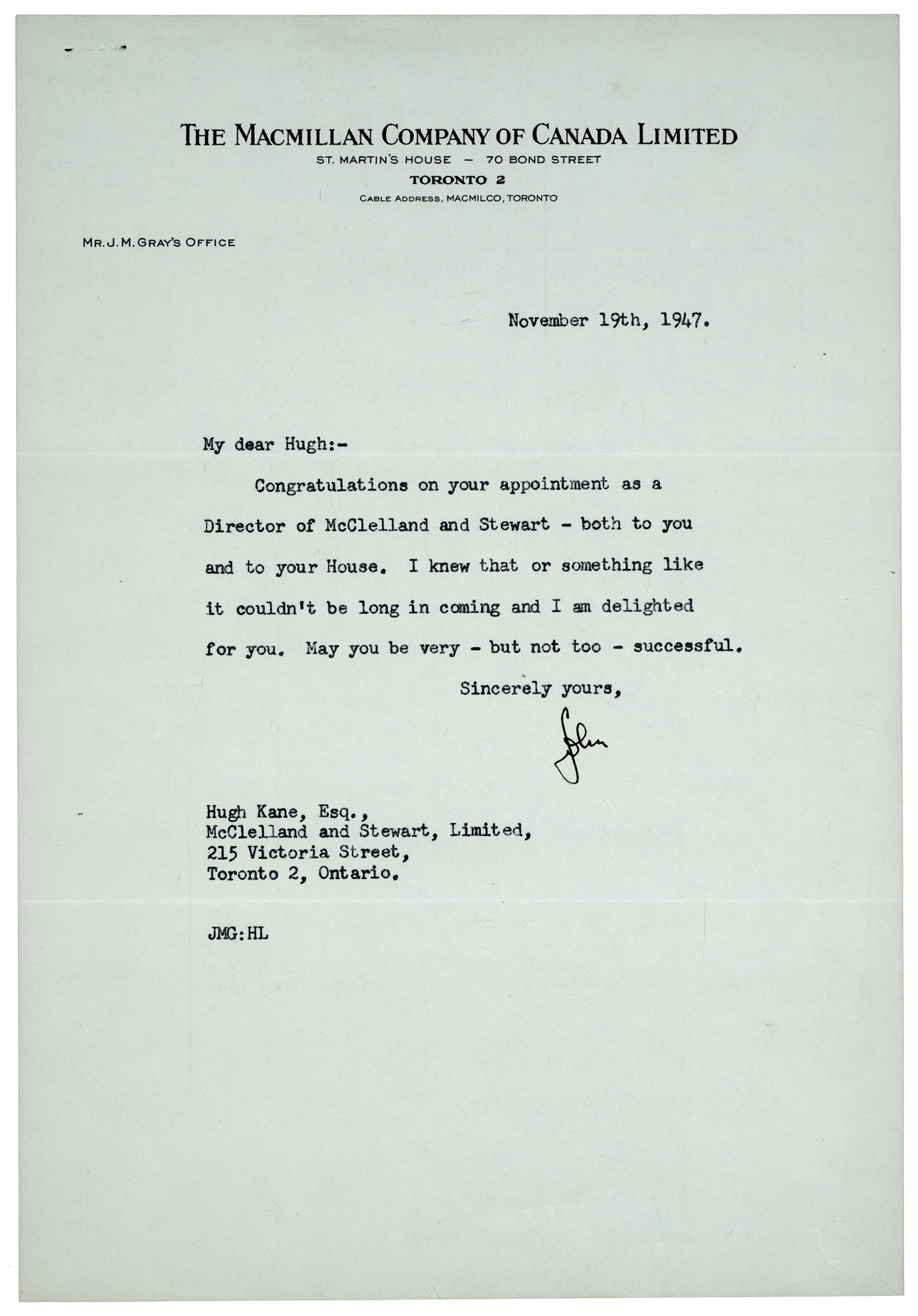 publishing legend, Jack McClelland, in 1969. The occasion was Kane’s departure from McClelland & Stewart (M&S) where he had worked since 1937 (apart from the Second World War years) rising from the position of salesman to vice-president. He was leaving M&S to assume the presidency of MacMillan of Canada. McClelland sent him off with abundant praise, noting that Kane had “taste, judgement, experience and an unrivalled knowledge of the trade.” Writing to S. Phelps Platt of Dodd, Mead and Co. in New York, Kane felt that M&S was in good hands with McClelland, Larry Ritchie, and David McGill. He was comforted, however, to know that he would be missed. 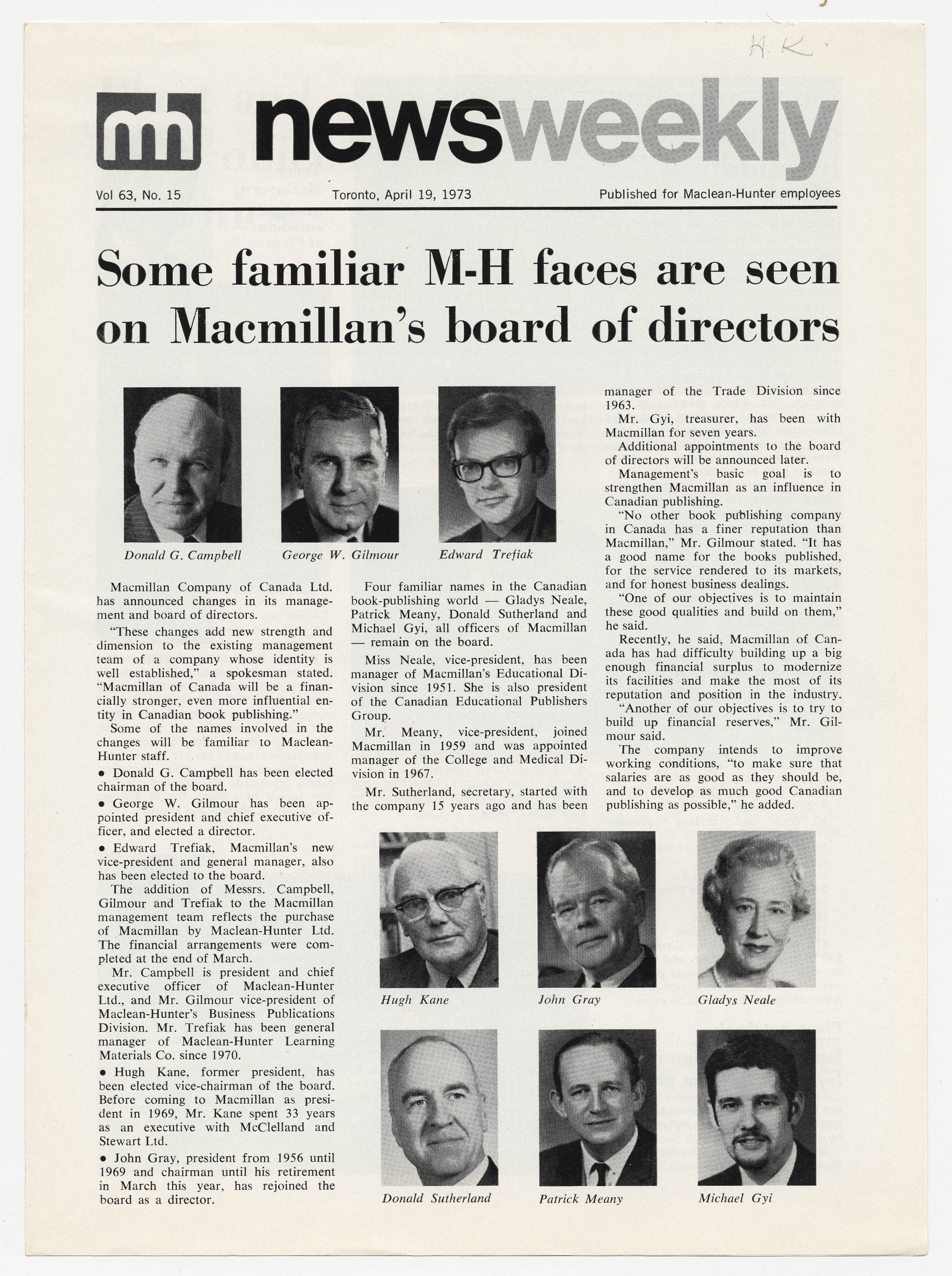 Born in Belfast, Kane emigrated to Canada as a child, and entered the work force as an employee of Sun Life Assurance Company in Montreal after graduating from Rothesay Collegiate in New Brunswick in 1928. Although he had no further formal higher education he was well read. He put his talents – integrity, a calm nature, and a wonderful sense of humour – to effective use in the publishing field to become a widely admired and loved figure. He was president of Macmillan for only three years, becoming vice-chairman when the firm was acquired in 1972 by Maclean-Hunter who brought in their own administrators. 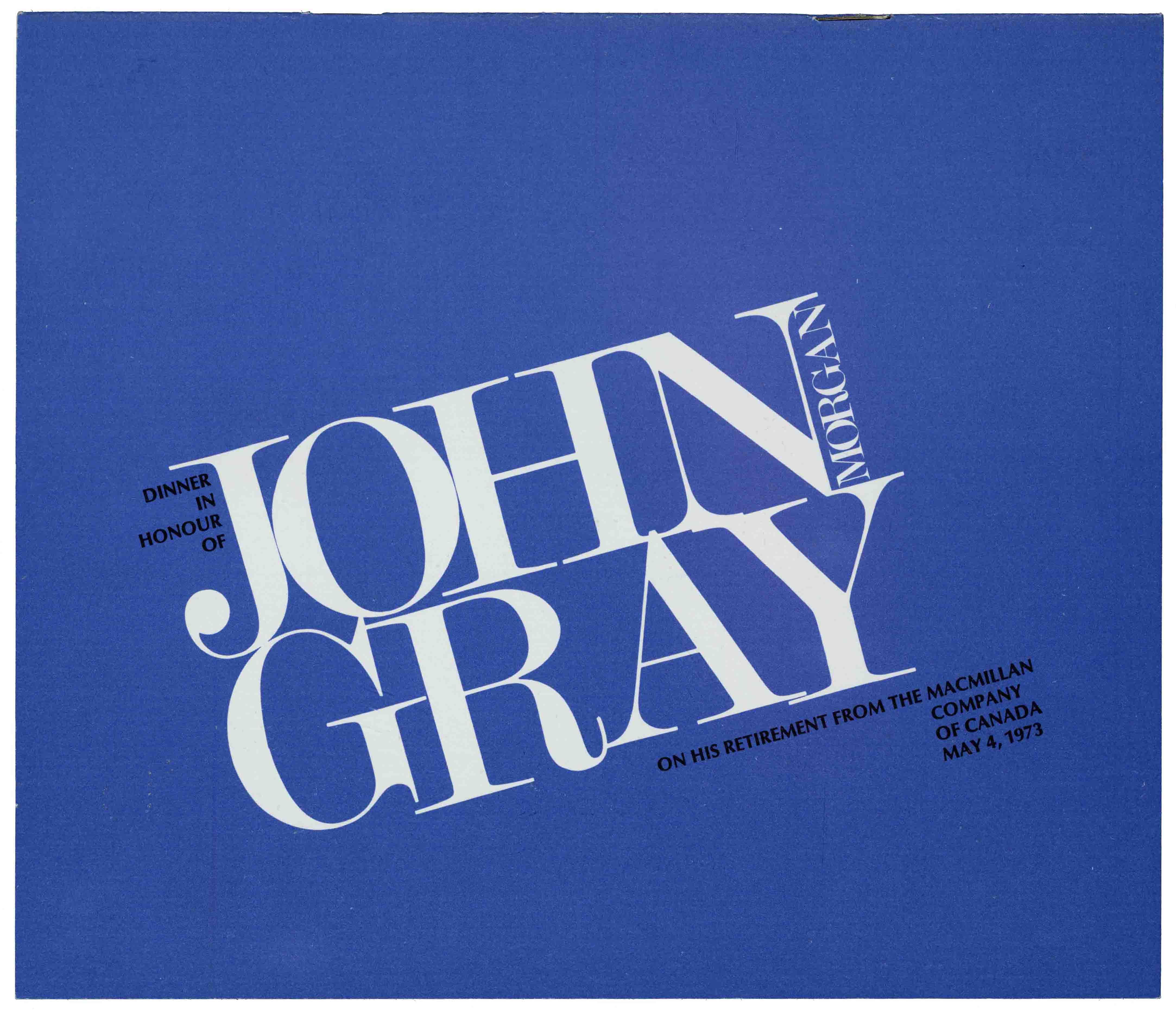 When Kane joined Macmillan in 1969, incumbent president John Gray became chairman of the board and chief executive officer. Kane chaired Gray’s retirement dinner in May 1973. (By then Kane himself had been replaced in the presidency by George W. Gilmour as a result of the Maclean-Hunter acquisition.) Gray wrote Kane a very thoughtful letter, thanking him for all he had done. He hoped that in a few months “the whole painful shock and dislocation of the take-over will be half-forgotten.” He commended Kane for the 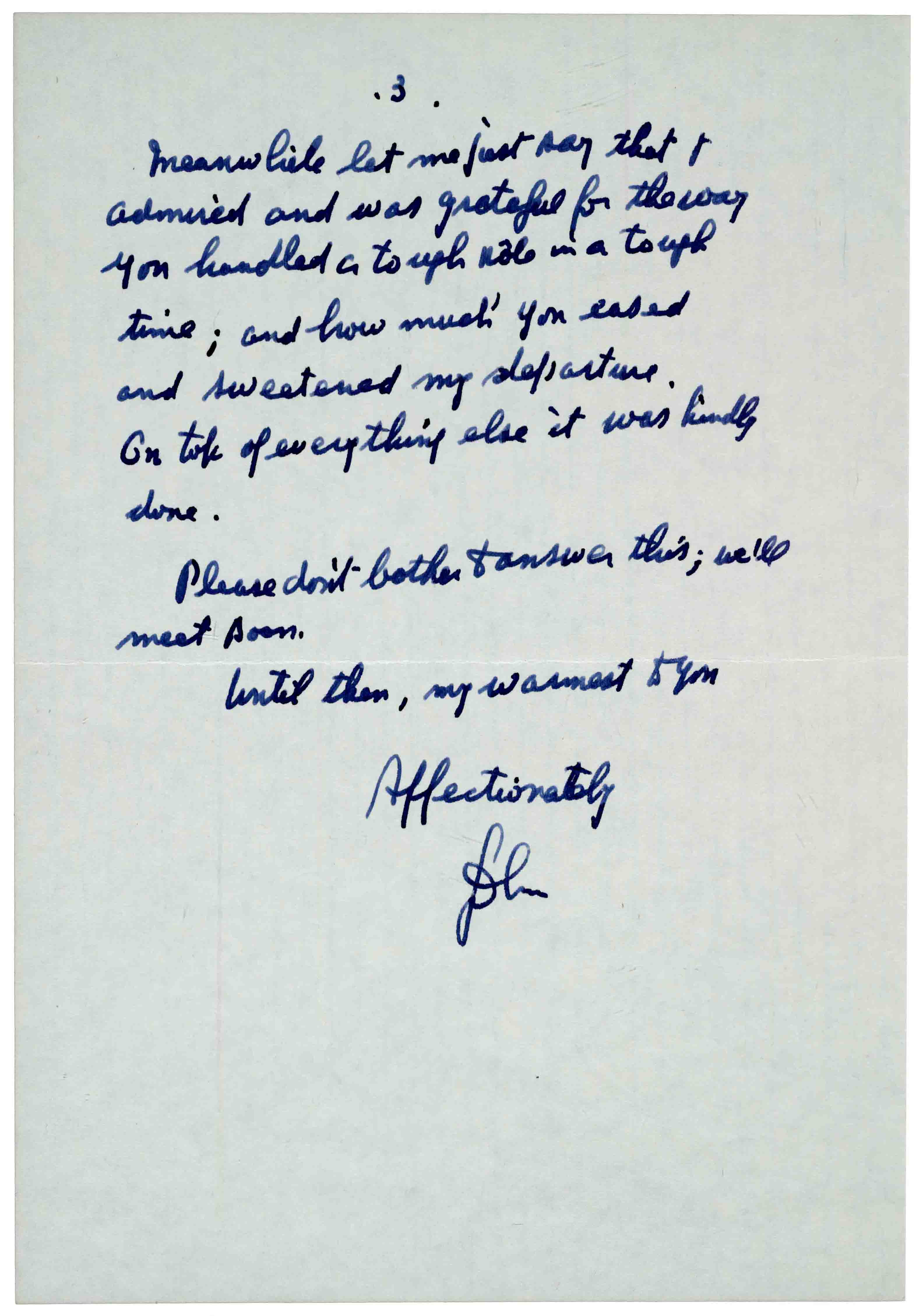 way he had “eased and sweetened” his own departure. Gray’s words about the take-over proved to be true: Kane and Gilmour went on to forge a cordial relationship.

In 1976 Kane returned to M&S in the role of president and managing director of one of its subsidiaries, the Natural Science Library. Two years after his retirement in 1982 he died.

Kane had many successes. During the period of his Macmillan presidency, he published Joseph Smallwood’s, I Chose Canada, John Diefenbaker’s Our Canada, and Dennis Lee’s Alligator Pie. In a letter to Robert Fulford at Saturday Night magazine, he noted that “old Dief [Diefenbaker] was the most difficult author I have ever encountered.” There were many other highlights. Back in 1953 Kane had dealt with the brilliant photographer Yousuf Karsh, arranging for him to publish with Knopf in New York. Kane often advised Jack McClelland on authors, shrewdly and wittily summing up a possible book by Quebec politician, Réal Caouette: “I would be 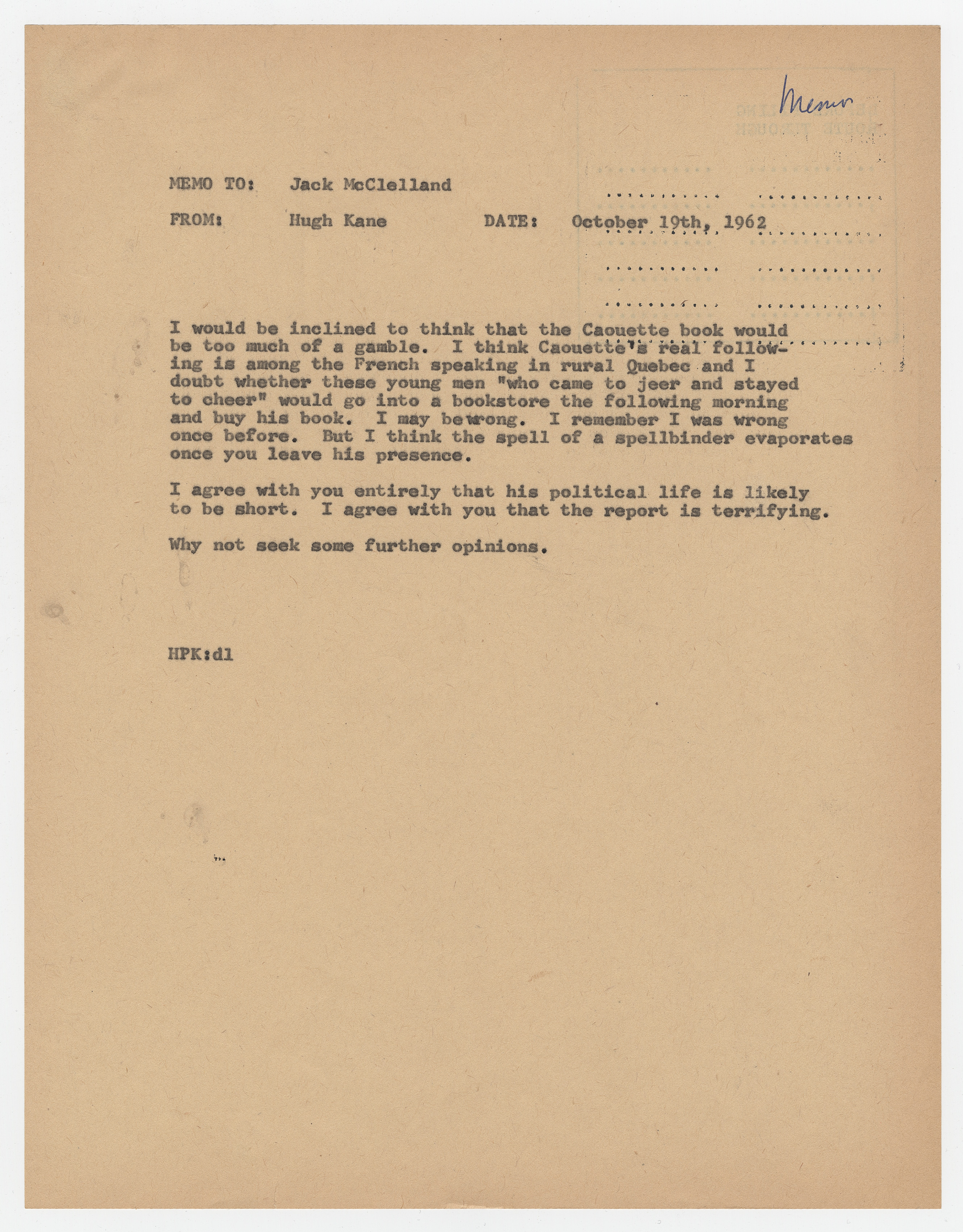 inclined to think that the Caouette book would be too much of a gamble … I could be wrong, I remember I was wrong once before. But I think the spell of a spellbinder evaporates once you leave his presence.” He also had a negative opinion about the inclusion of a novel by nineteenth-century Canadian author James De Mille – A Strange Manuscript Found in a Copper Cylinder – in the New Canadian Library series, pronouncing in 1962: “It must have qualities which were quite unapparent to me for I can see nothing in it but a badly outdated mixture of R.M. Ballanytne and second rate Verne.” By 1969 this book had made its way into the series.

Throughout his career Kane maintained an even keel with his management style. As he told Vinia Hoogstraten in 1966: “Many years ago I made a strict rule for myself never to allow a book reviewer to upset me. It is a good rule and is largely responsible for the fact that I am still alive.” Kane balanced his workload by being active in organizations such as the Young Canada Book Week. In 1973 he read to 180-plus children at Parliament Hill in Ottawa. He took care to read the many thank-you notes he received from the children and, although tempted, had insufficient time to reply individually. He did request that his secretary send at least one child a book about parliament.

Kane always drew a firm line against poaching authors from other publishing houses, noting in 1973 that he had “never in thirty years tried to disturb what I knew to be a happy publisher-author relationship.” He had heard that writer, actor and 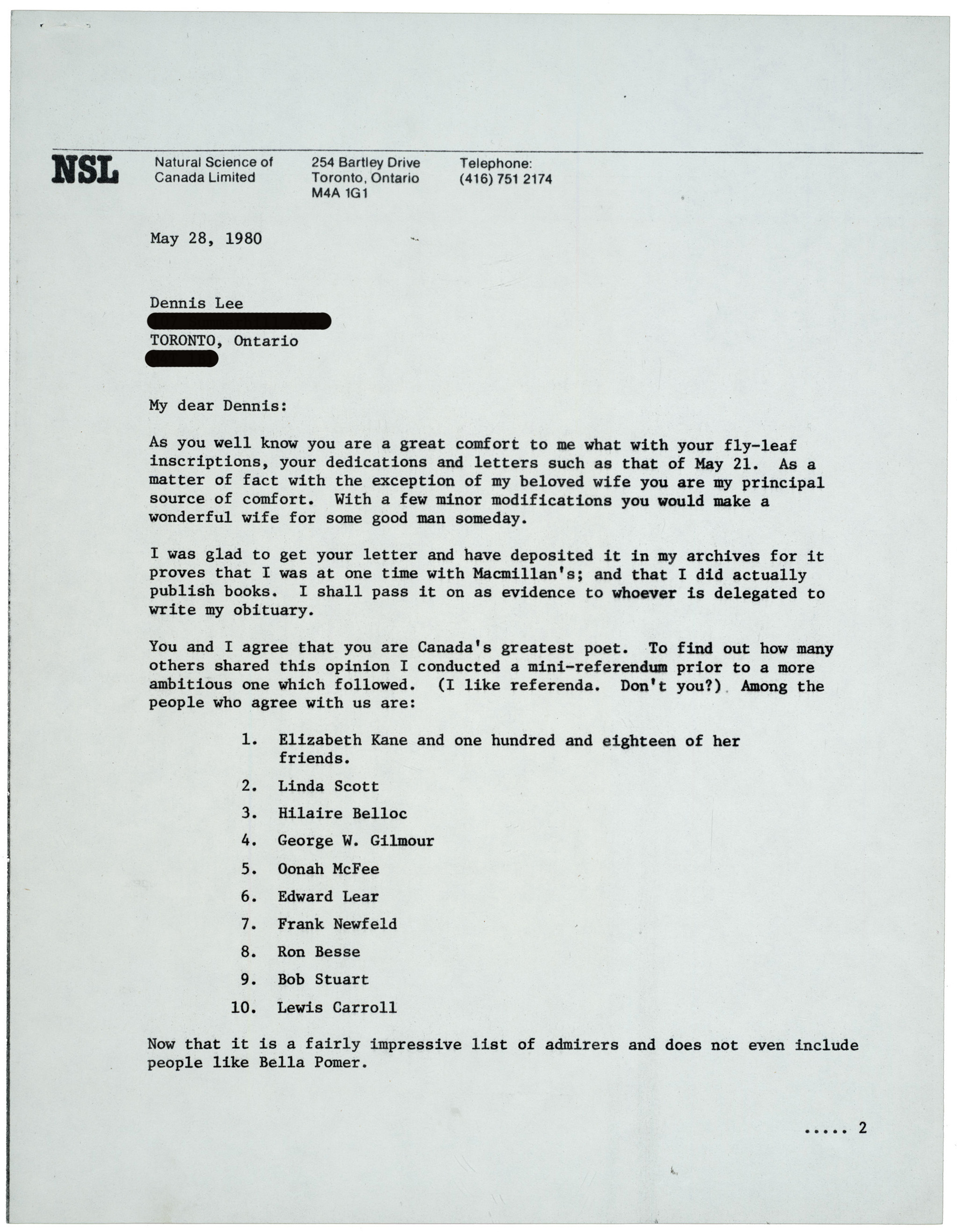 broadcaster Don Harron was “disenchanted with his present publisher” and under those circumstances was only too happy to offer him the opportunity to join Macmillan. Although Harron did not sign on with Macmillan at that time, he did so later in the decade. It was also Kane who suggested to George Gilmour that the firm approach Dennis Lee in 1973. In 1974 Alligator Pie was published.

The following year Lee approached Kane with regard to his friend Matt Cohen who was having some difficulties with Jack McClelland. This discussion dragged on for a year. Although Kane very much wanted to publish Cohen he advised him that if he could get a satisfactory offer from M&S he should stay there. Cohen took his advice, thanking him “for being so direct, when I have been so confused.” 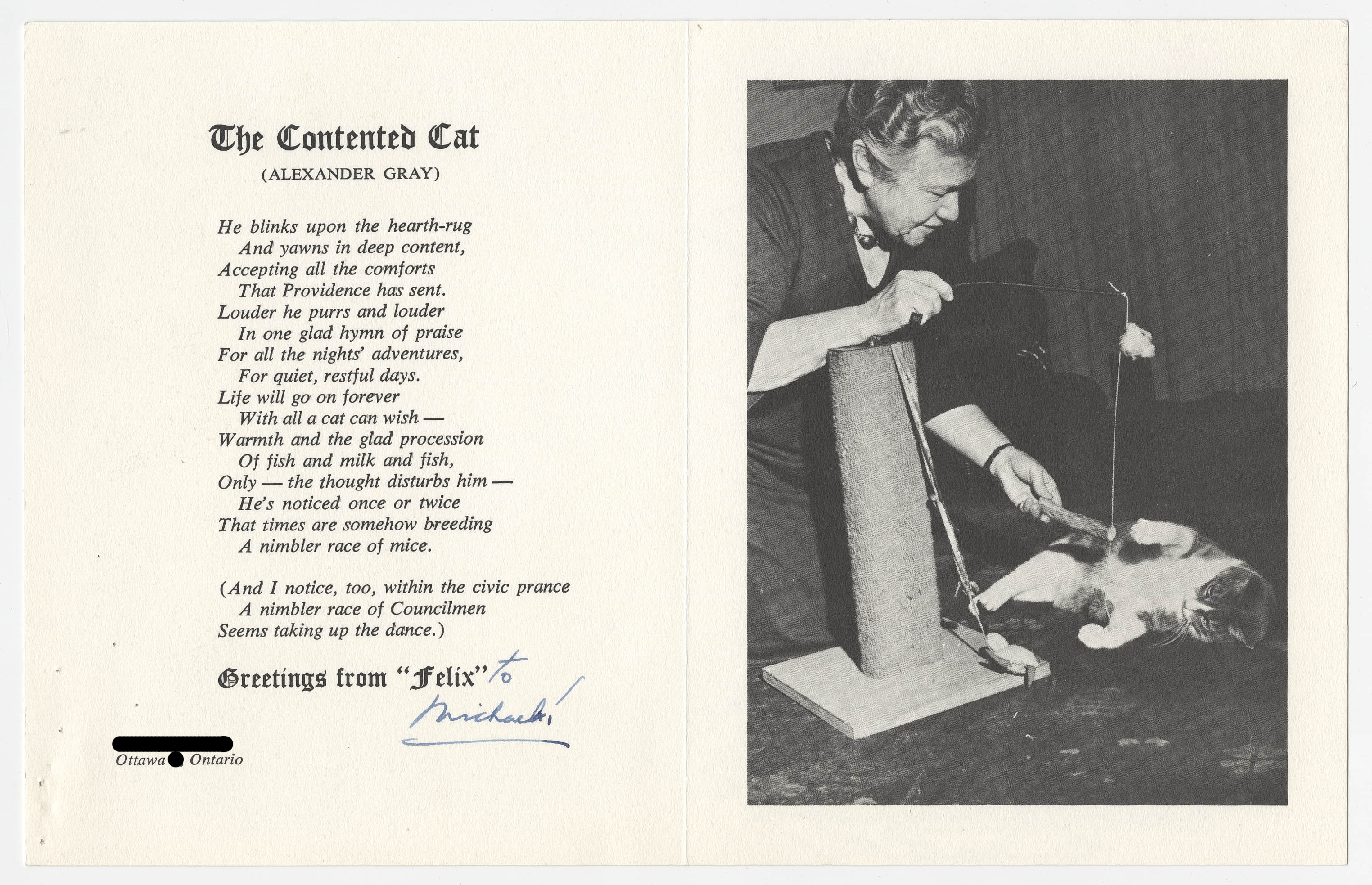 One of Kane’s most delightful and unusual publisher-author encounters involved Ottawa’s long-time, “crusty” mayor, Charlotte Whitton. Trying to persuade Whitton to write her memoirs, Kane observed that they were both cat lovers, and used this information to his advantage in pursuing her as an author. After meeting her at a dinner in Ottawa in 1970, Kane noted in a memo dated 30 March that Whitton, then in her mid-70s, was “still pretty perky and as bright as can be.” He followed up the encounter with a letter asking her to consider writing her memoirs. She, of course, had been approached by other publishers. Kane, however, went the extra yard, promising 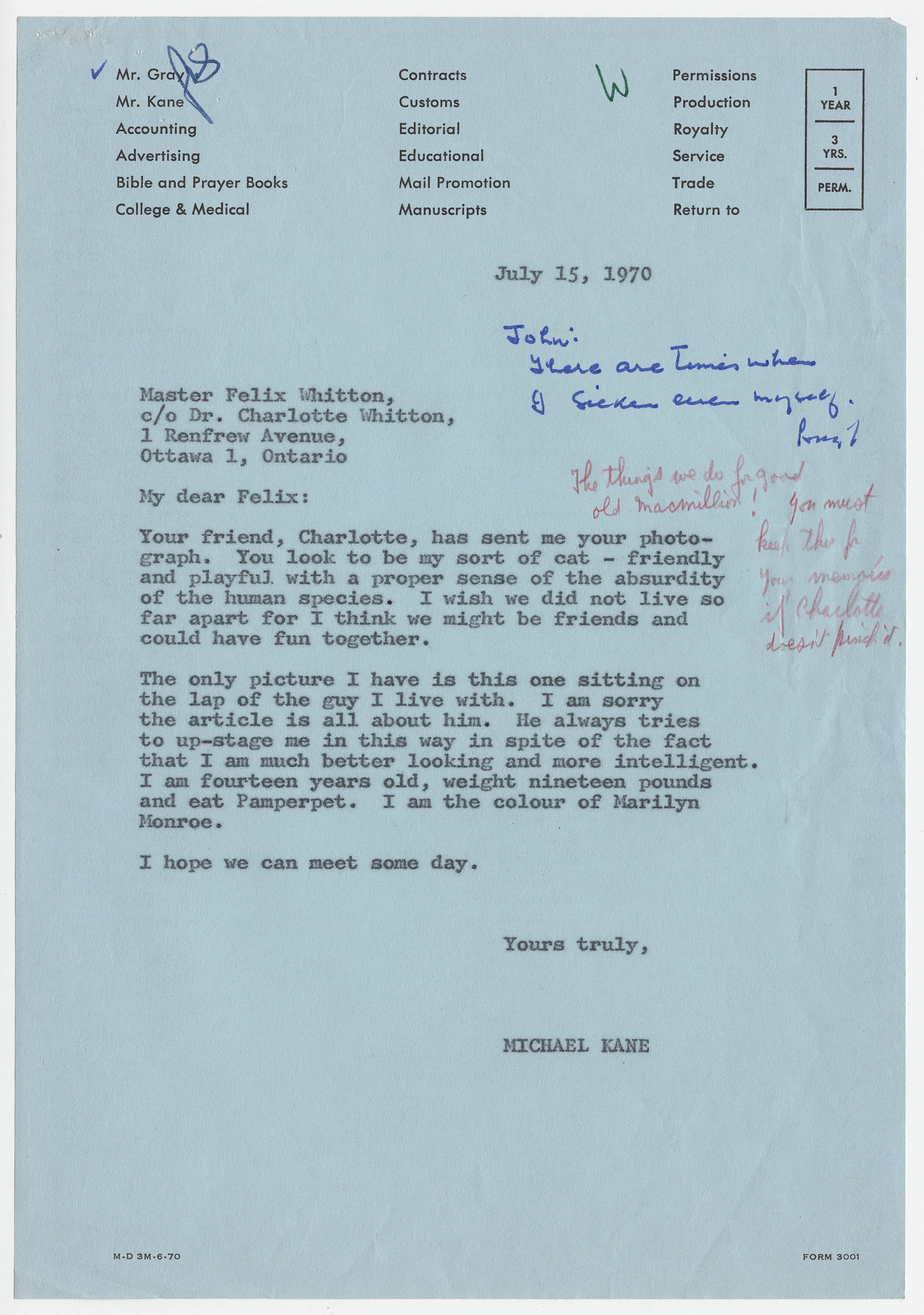 her a desk and a tape recorder to counter her objections to getting down to the task. But the pièce de résistance was the cat manoeuvre. Whitton sent a card from her cat, Felix, to Kane’s cat, Michael. Kane responded in kind, writing an absolutely charming letter from “Michael Kane” to “Felix Whitton,” 15 July 1970. The carbon copy digitized here was forwarded by Kane to John Gray, then chairman of the board at Macmillan, with a marginal note: “There are times I sicken even myself.” Gray replied: “You must keep this for your memoirs if Charlotte doesn’t pinch it.” Despite all these efforts her memoirs were never published. She died in 1975.

In 1973 Kane spoke in Edmonton at the awards dinner for the Search for a New Novelist competition. George Gilmour commented on the speech: “I suppose you can’t be in the publishing business as long as you have and not have acquired a facility with words. However, I found your address warm and friendly, with some significant points being established as to what makes for good publishing.” In his speech, Kane says: “The book publisher has been described as ‘a stockbroker with the soul of a poet.’ This, I am afraid, will just not do. Any stockbroker would be appalled by the risks a publisher assumes each day and some of the hardest traders I have ever encountered have been poets. Most poets are unwilling to concede we even have a soul.” He went on to enumerate the qualities that a good editor-publisher must have. “He needs both a business sense and editorial sensitivity, plus a gambling streak. On top of this, he requires a strong acquisitive instinct although that should not be apparent.” Hugh Kane had all this and more, which is what made him such a beloved and towering figure in the Canadian publishing world.