The documents pertaining to Isabella Valancy Crawford’s short life and publishing career are incomplete, cryptic, and discordant, at best: some of her manuscripts were barely salvaged from use as fire kindling. Like many poets of her time, Crawford struggled to publish in Canada. Following her death, correspondence between advocates and editors of her work illuminate the cost and ambiguity of copyright at the turn of the century.

Born the sixth of thirteen children in Dublin, Ireland, Isabella Valancy Crawford (c. 1850-1887) had a short and brilliant career. One of Canada’s few women Confederation Poets, Crawford also wrote short stories and novels, and wove some of her poetry into original melodies. Although her work won great critical acclaim, she was unable to earn a living and escape poverty before her death. Because of the ephemeral and cryptic nature of Crawford’s documents and 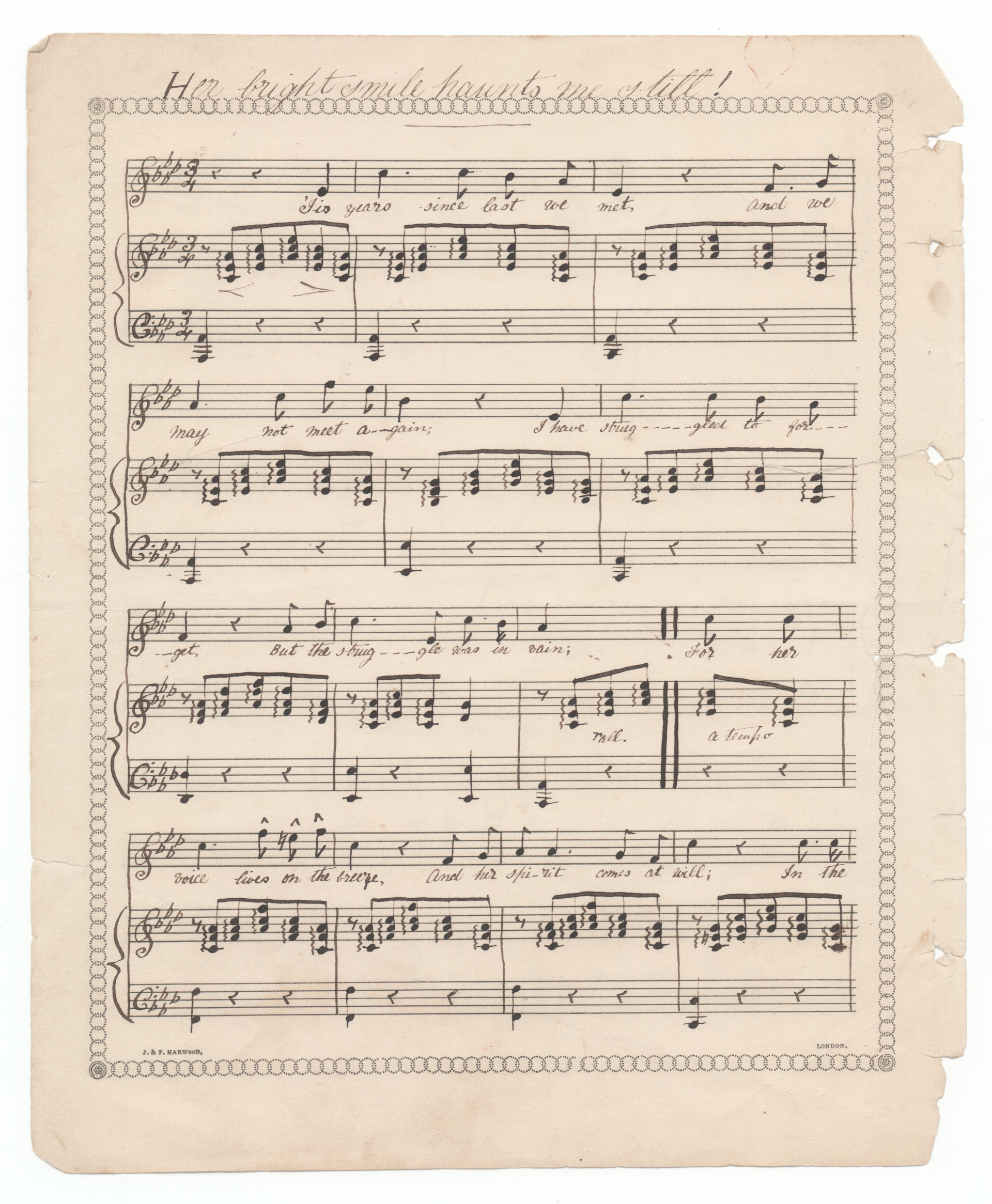 census material of the time, both in Canada and Ireland, there remains no consensus among scholars about her biographic and publishing details. Nearly fifty years after her death, literary collectors of her work were contacting Crawford’s relatives to attempt to reconcile conflicting details about the poet’s life and death. Today, many details remain discordant.

Crawford’s publishing career was fraught with hardship. Published on 13 April 1872 in the Montreal periodical, The Hearthstone, the short story “The Hospital Gondola” is regarded as Crawford’s first publication, which was followed by her first published poem, ‘The Departure of Winter,” on 4 May. Crawford subsequently had to sue The Hearthstone for payment. 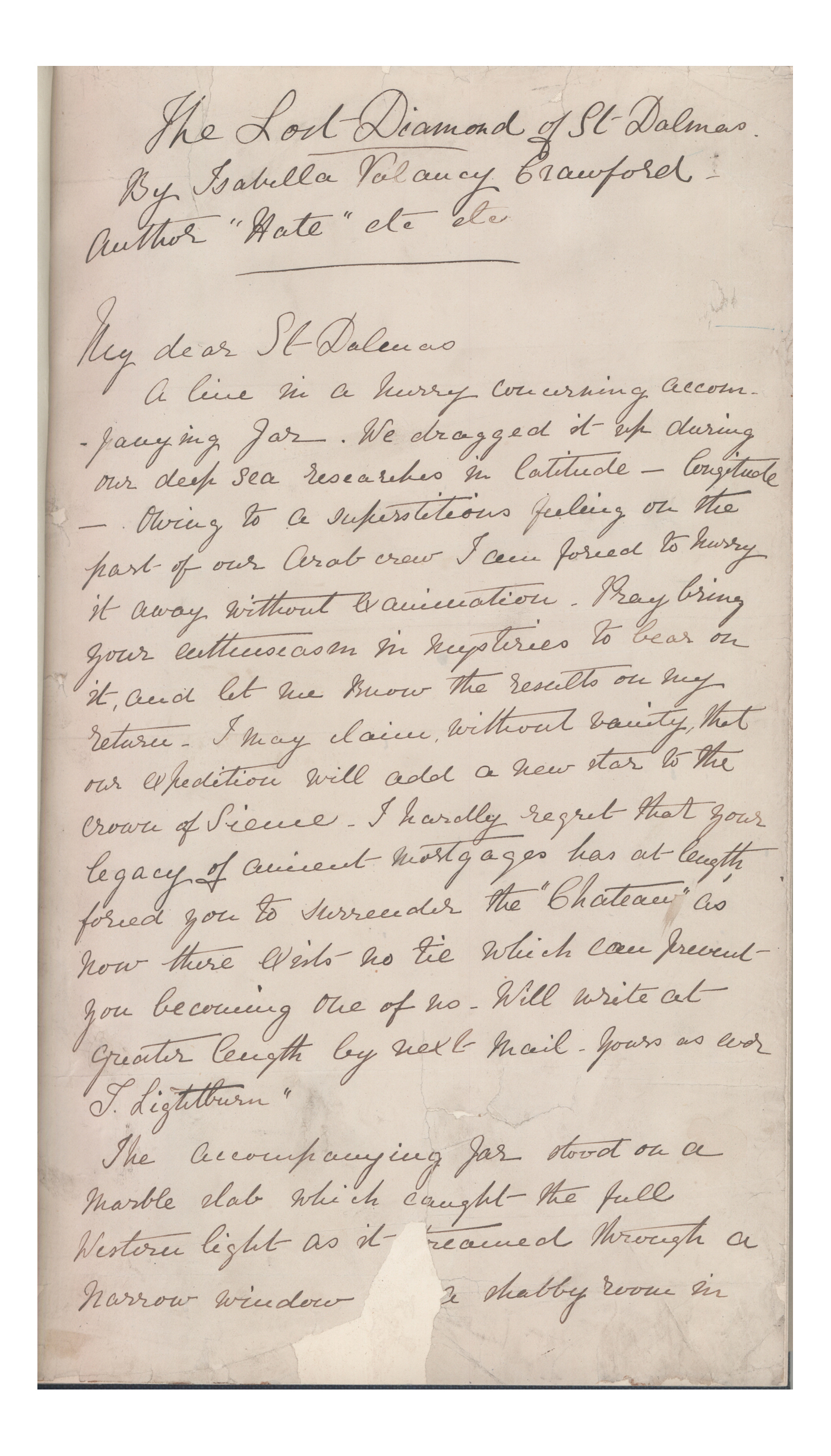 In the same year, under the guidance of James McCarroll (1814-1892) – an affluent Irish-Canadian writer with roots in Peterborough, Toronto, and New York – Crawford began publishing for an American audience with the first installment of her first serialized novel, Wrecked! Or, The Rosclerras of Mistree, in New York’s Frank Leslie’s Illustrated Newspaper on 26 October. By 1879, Crawford had published over a dozen more poems in various Toronto periodicals, and over twenty short stories and two novels in New York. One of the few remaining complete manuscripts of a short story, “The Lost Diamond of St. Dalmas,” was rebound and archived by her literary collectors. It remains unpublished.

Struggling with attempts to publish in Canada, and attempting to improve her financial situation, Crawford self-financed the publication of the one and only book that would appear in her lifetime, Old Spookses’ Pass,Malcolm’s Katie, and Other Poems (1884), published in Toronto by

James Bain and Son. The collection included Crawford’s most famous long poem, Malcolm’s Katie: A Love Story. With high hopes, Crawford had a thousand copies printed. To her disappointment, approximately fifty copies were sold for fifty cents a copy. Crawford continued to publish poetry and short stories in various newspapers and magazines and, in 1886, reissued Old Spookses’ Pass with a new cover, title page, and references to critical praise of the earlier version. Sales could not have been abundant because after her death from heart disease in 1887, a considerable number of unsold copies were rebound and put on the market by William Briggs (1836-1922). A month after her death, “Tobaggan” – what may be Crawford’s final poem – appeared in New York’s sport and travel magazine, Outing. 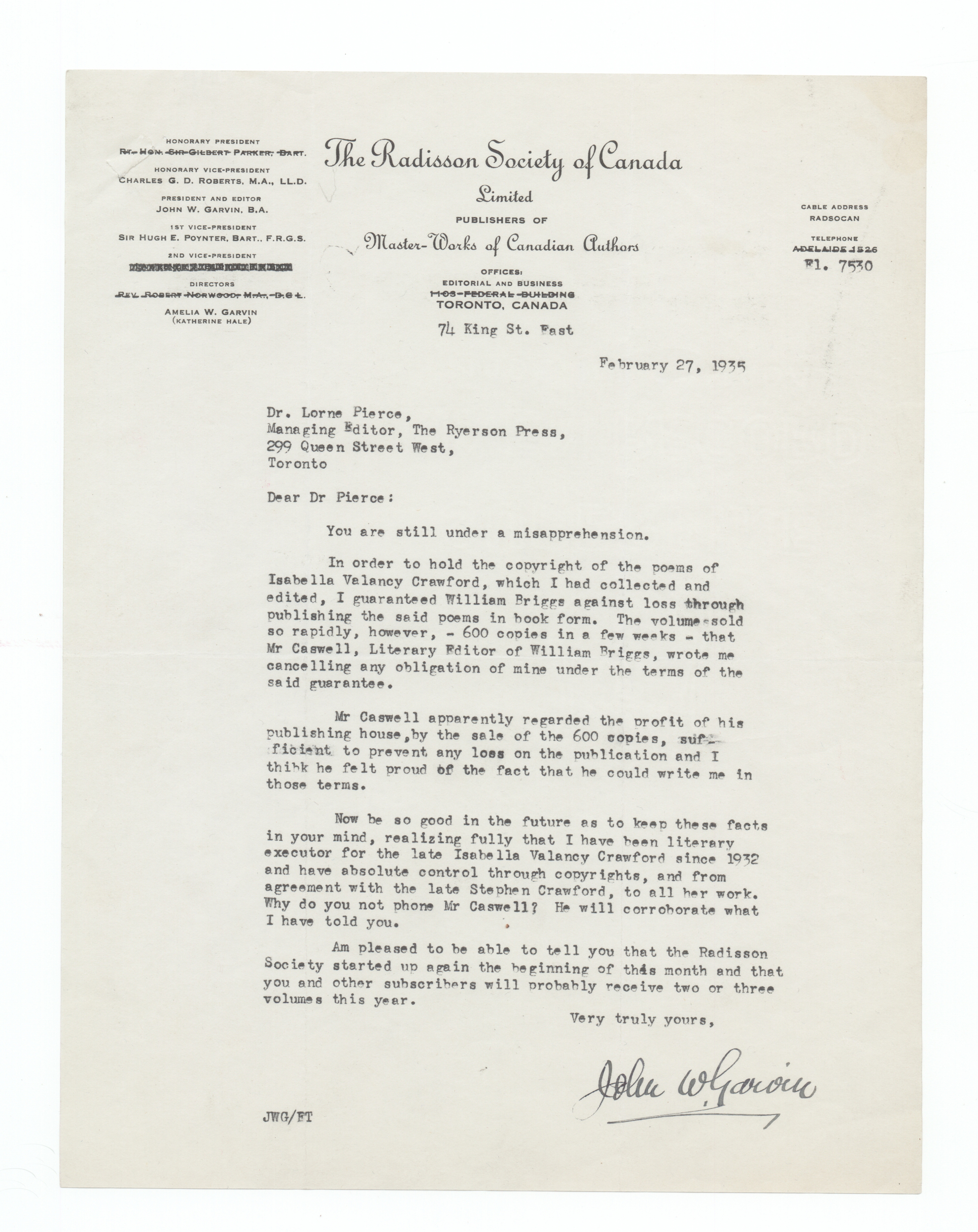 Critic and advocate John William Garvin (1859-1935), an avid collector of Crawford’s work, was appointed as the deceased poet’s literary executor by her brother, Stephen Walter Crawford, in 1902. Garvin later discovered some of Crawford’s poems and manuscripts being used as fire kindling in the Toronto house where she spent her last years and, in 1905, published the first posthumous poetry collection, which included fifty-two unpublished works. In 1935 he exchanged letters with Lorne Pierce at Toronto’s Ryerson Press about rights to Crawford’s work. Although there are no copies of Pierce’s responses to Garvin, Garvin’s letters reveal a dispute over the copyright. 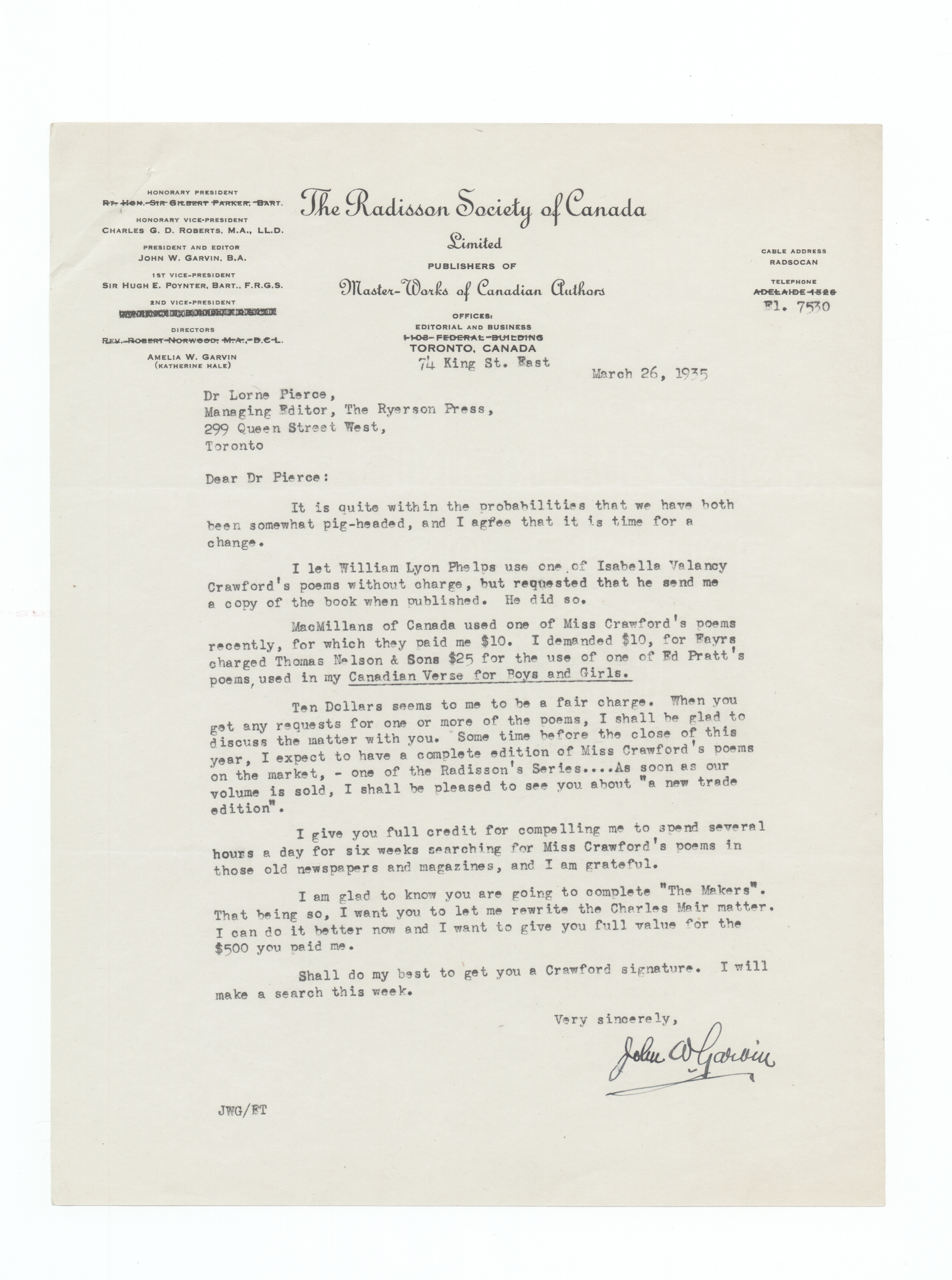 Garvin was the only person, at that time, to have applied to the Department of Agriculture for the right to her poetry. His letters also offer insight into permission fees for her poems: in a 26 March 1935 letter from Garvin to Pierce, Garvin notes that he had received ten dollars for the use of one poem by Macmillan of Canada. The remnants of Crawford’s work that Garvin salvaged from use as kindling were later donated to Pierce and the Queen’s University Archives where they remain today.

Early, Len, and Michael A. Peterman, eds. Introduction. Winona; or, The Foster-Sisters by Isabella Valancy Crawford. Peterborough, ON: Broadview Press, 2007.

Farmiloe, Dorothy. Isabella Valancy Crawford: The Life and the Legends. Ottawa, ON: The Tecumseh Press, 1983.