According to the most recent evidence, William Wilfred Campbell was born on 1 June 1860 in Newmarket, Canada West (now Ontario). He attended high school in Owen Sound, among the hills and waterways of the Lake Huron and Georgian Bay 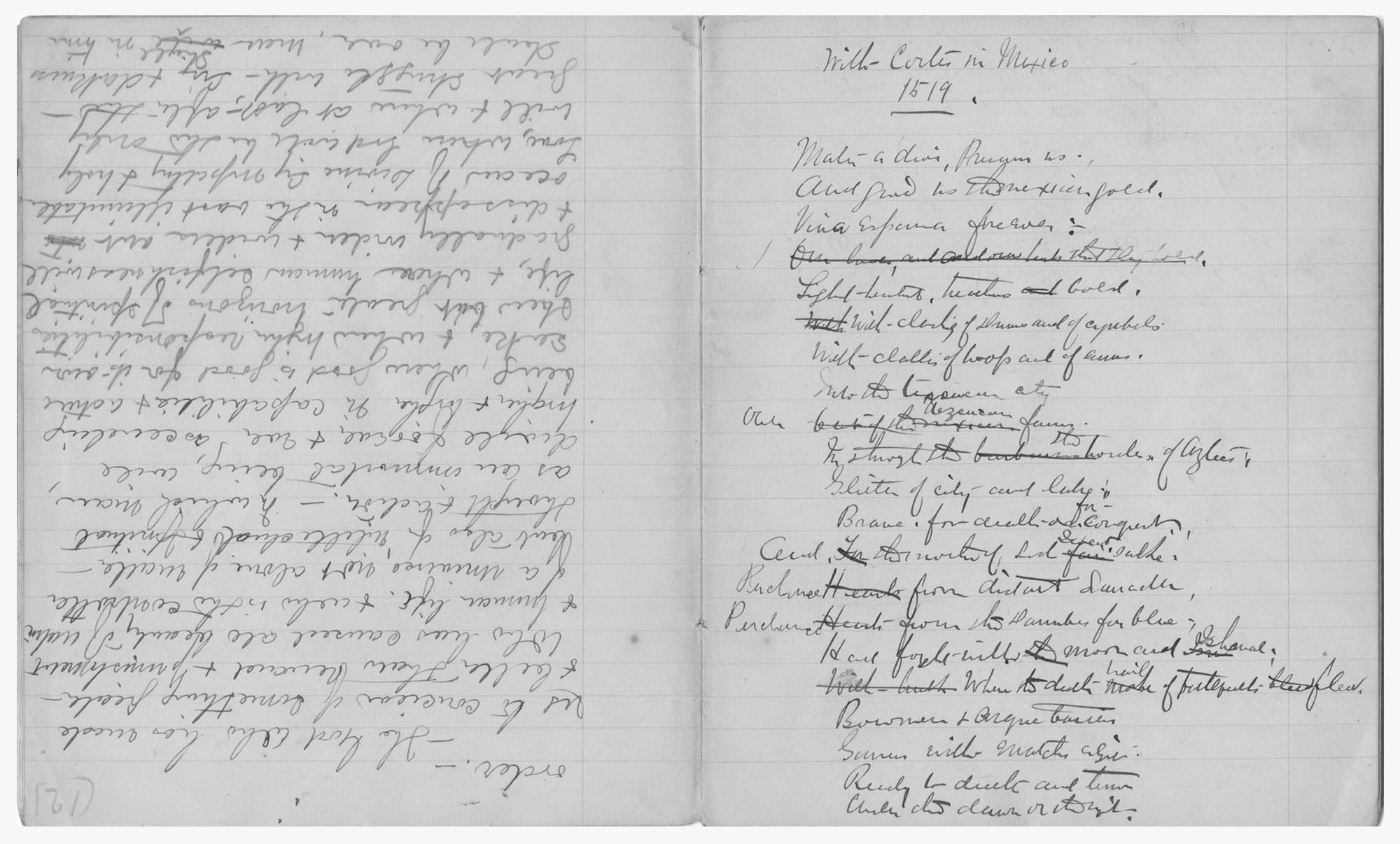 region, and taught for a time at a country school near Wiarton. In 1880, Campbell went to University College, Toronto, but transferred to Wycliffe, the Anglican divinity school at the University of Toronto, two years later. It is clear that Campbell was writing poetry throughout his early religious training: in his early notebooks, drafts of poems compete for space among his sermons, and the University of Toronto newspaper, the ‘Varsity, published several of Campbell’s earliest poems. 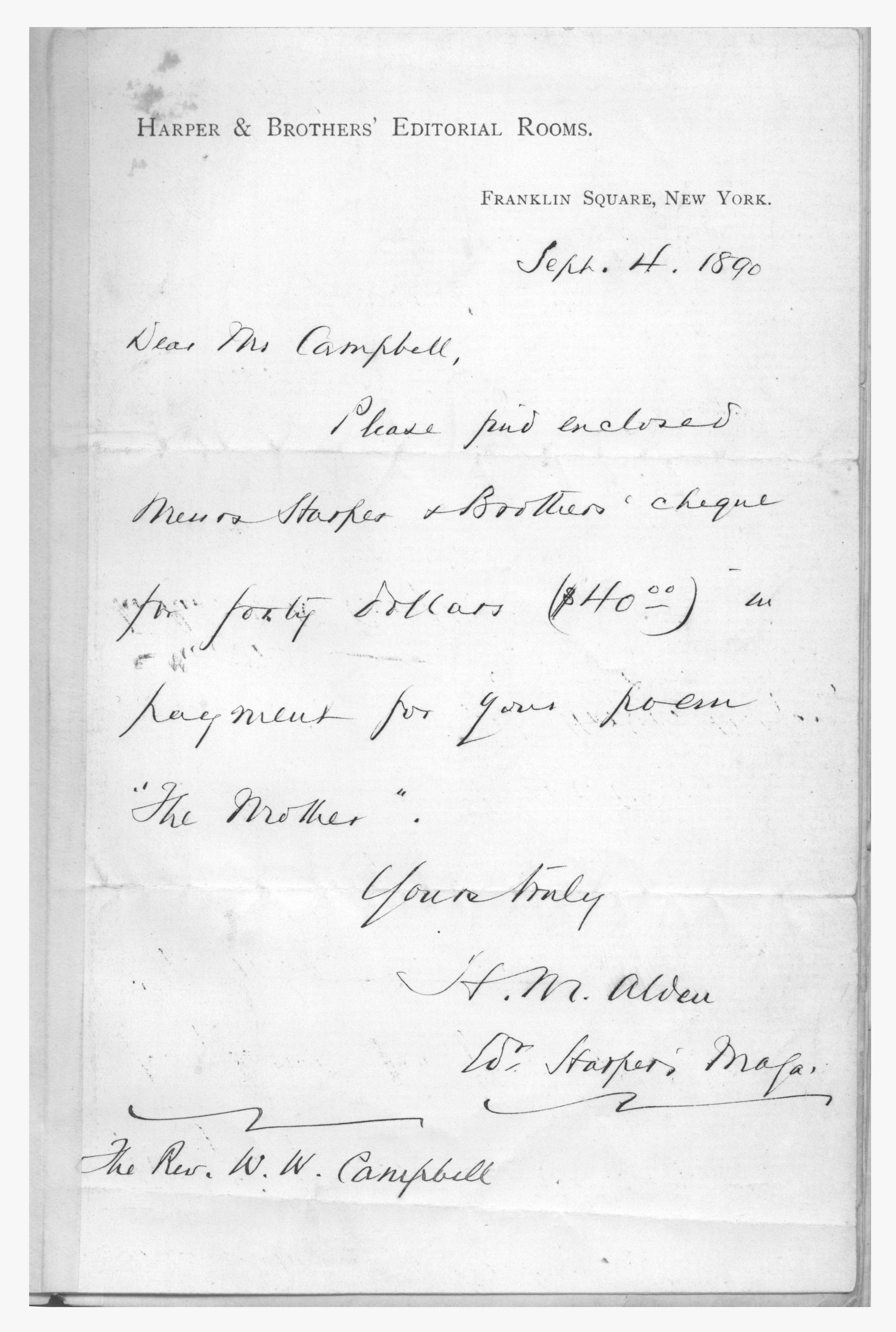 In 1883, Campbell transferred to the Episcopal Theological School in Cambridge, Massachusetts. There he met the poet Oliver Wendell Holmes, who passed along some of Campbell’s poems to S.B. Aldrich, editor of the Atlantic Monthly. Aldrich ran Campbell’s “A Canadian Folk Song” in the January 1885 number. Campbell’s letters from this period, which offer a glimpse into the world of the nineteenth-century American periodical press, show that the poet was submitting regularly to some of the most widely read American publications, such as the Atlantic Monthly, Harper’s, Cosmopolitan, and others.

Campbell was ordained in 1886 and served in several parishes in New Hampshire, New Brunswick, and Ontario. During his brief tenure in St Stephen, 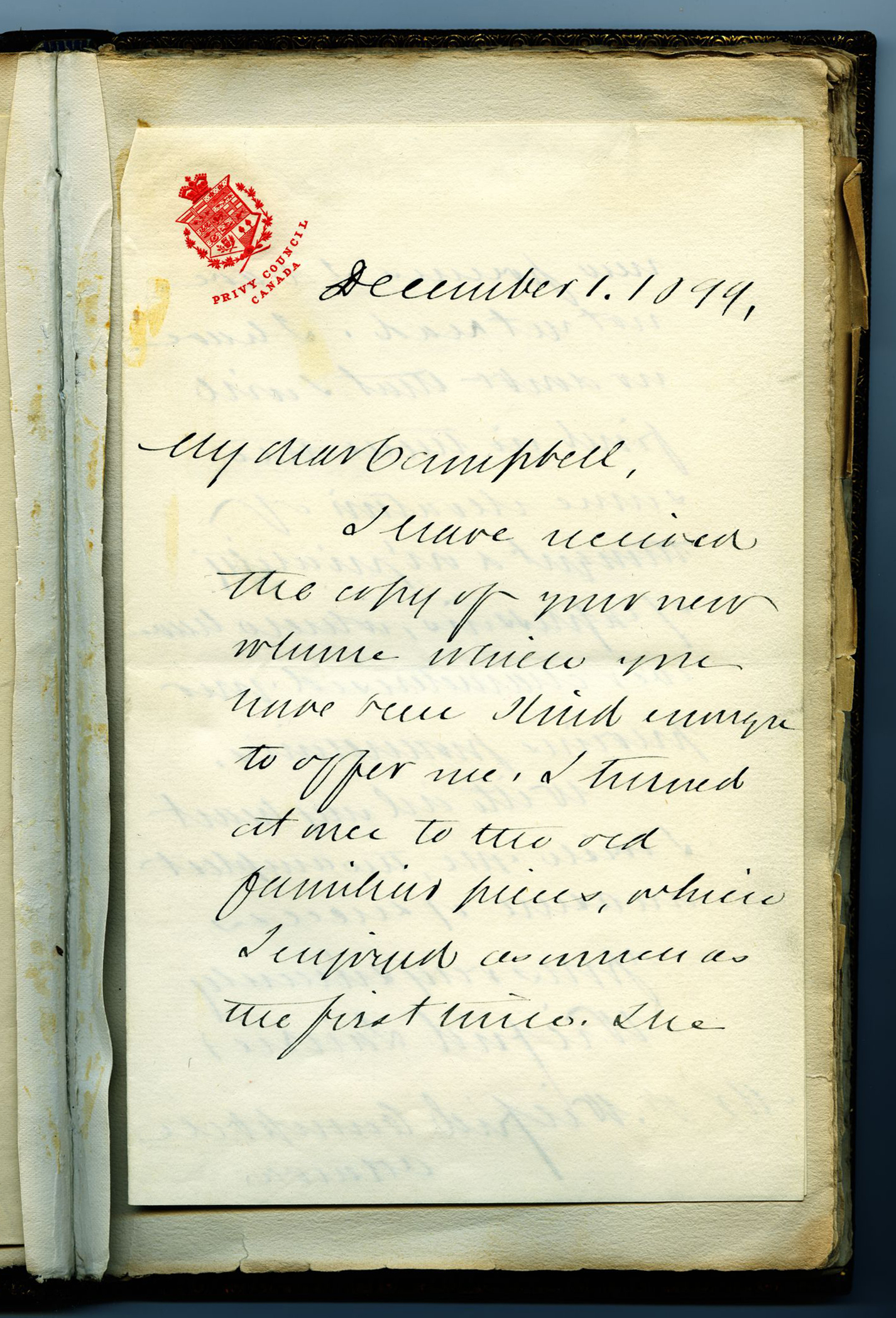 New Brunswick, Campbell published his first books of poetry, Snowflakes and Sunbeams (1888) and Lake Lyrics and Other Poems (1889). In 1891, Campbell left the ministry and became an employee of the Ottawa civil service, holding posts in various departments, including the Department of Militia and Defence, the Privy Council Office, and the Public Archives. Campbell’s third poetry collection, The Dread Voyage and Other Poems, appeared in 1893. He was fond of sending copies of his poems to his friends and acquaintances, and his correspondence contains numerous thank-you notes from recipients, including important political figures such as William Lyon Mackenzie King and Wilfrid Laurier. 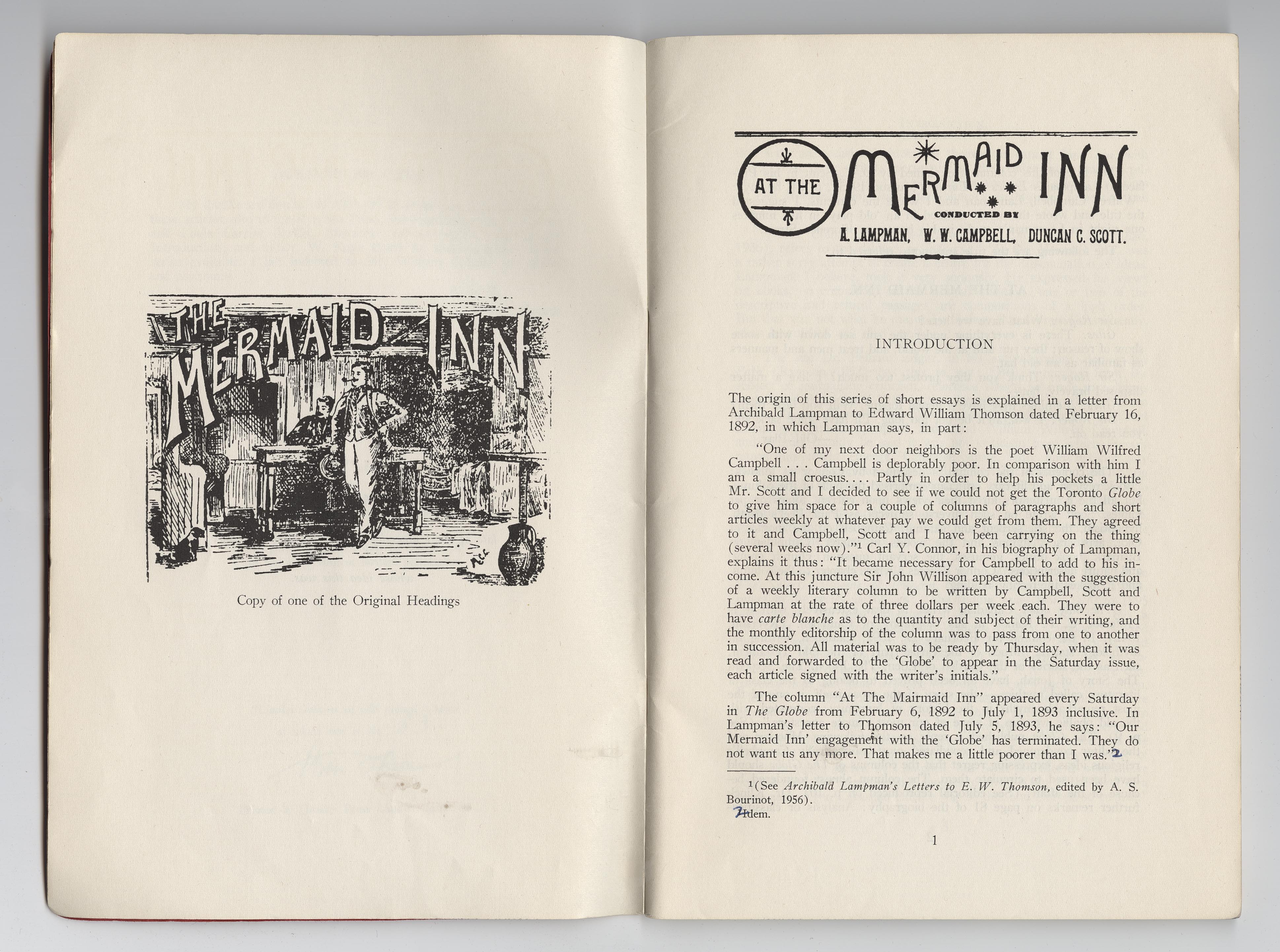 Campbell befriended fellow poets Duncan Campbell Scott and Archibald Lampman when they began their collaborative “At the Mermaid Inn” column for the Toronto Globe in 1892. Although the column represents the lengthiest collaboration between members of the Confederation poets, it would last only eighteen months, its demise owing at least in part to Campbell’s increasingly truculent pronouncements. Campbell was beginning to feel underappreciated compared to his contemporaries, especially following an article by Joseph Dana Miller in the May 1895 number of Munsey’s Magazine in which the author lavishes praise upon Bliss Carman, Lampman, and Scott, but refers to Campbell close to the end of the 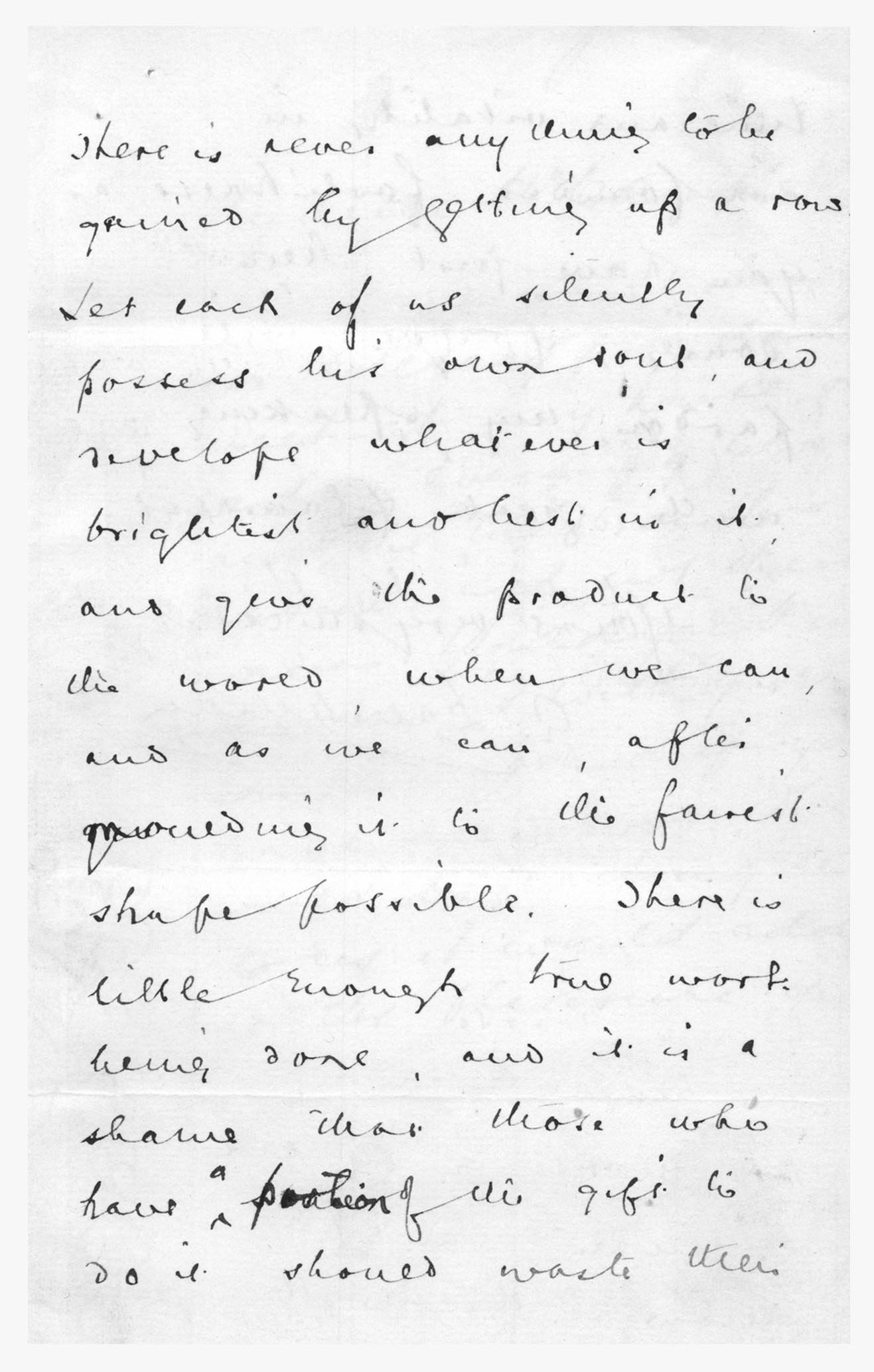 piece as “a rhetorician rather than a poet.” Campbell’s response was to accuse Carman of plagiarism, triggering the “War Among the Poets,” a verbal battle between Campbell, Carman, and others that played out for several weeks in the editorial pages of several leading Toronto broadsheets, including the widely read Globe. Judging by the personal letters Campbell received during this period, opinions about the affair were divided, even among his closest friends. One of the strongest critical views came from Lampman, who called Campbell’s campaign against Carman “confounded foolishness”.

During the late 1890s, Campbell began to shift his attention away from publishing for American audiences and towards publishing for the Canadian and British 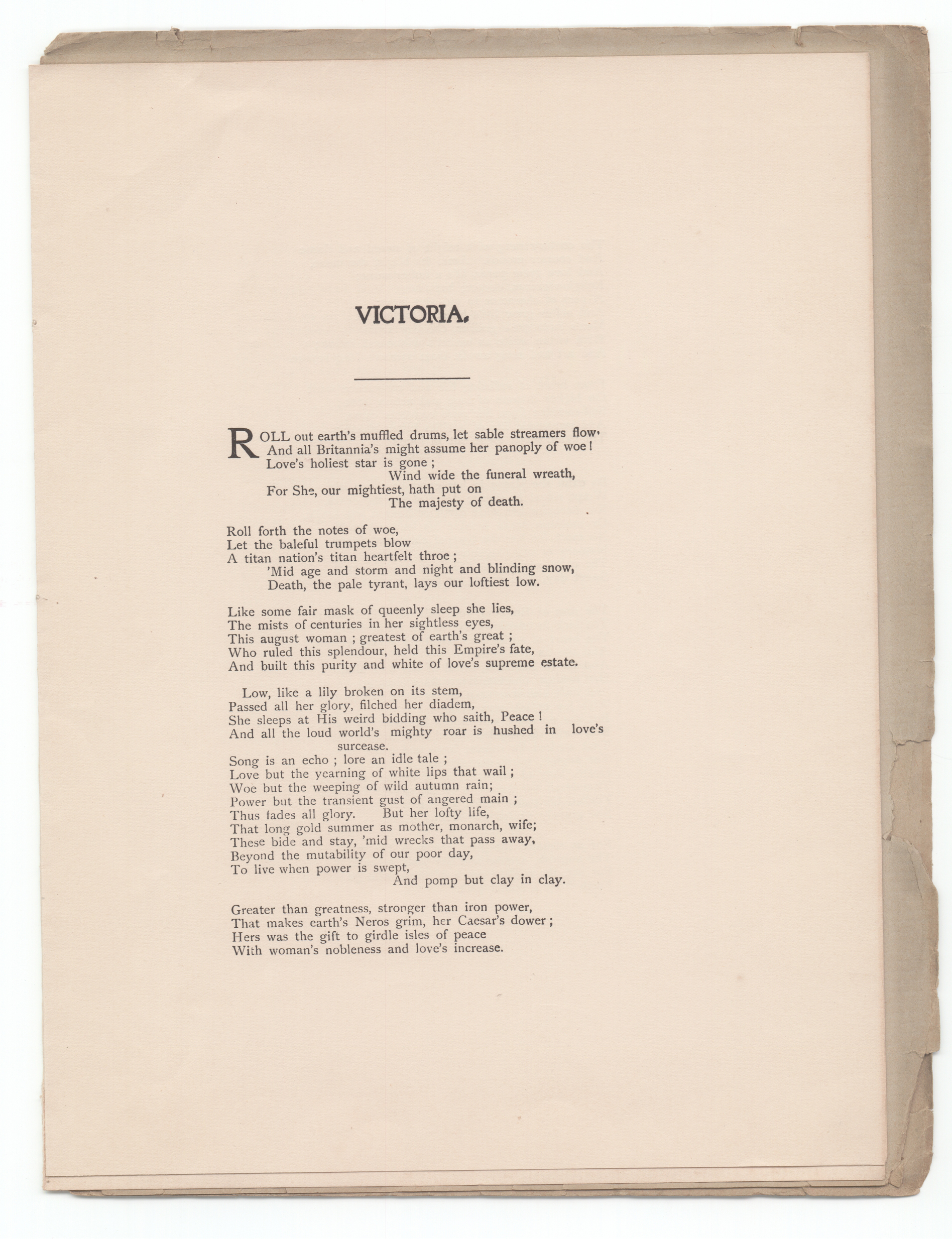 public, not just because of his growing distaste for the increasingly sensational content of American magazines, but also because of his burgeoning imperialism. In 1899, his fourth collection of poetry appeared, Beyond the Hills of Dream. Although published by an American firm, it was dedicated to Wilfrid Laurier and contains some of Campbell’s most baldly imperialistic works, such as “Victoria” and “England.” Campbell’s ensuing poetry collections, The Collected Poems of Wilfrid Campbell (1905) and the unsubtly titled Sagas of Vaster Britain (1914), include similar paeans to Empire.

Campbell also tried his hand at drama, fiction, and other forms of writing over the course of his literary career. He wrote at least ten plays, though only half were published during his 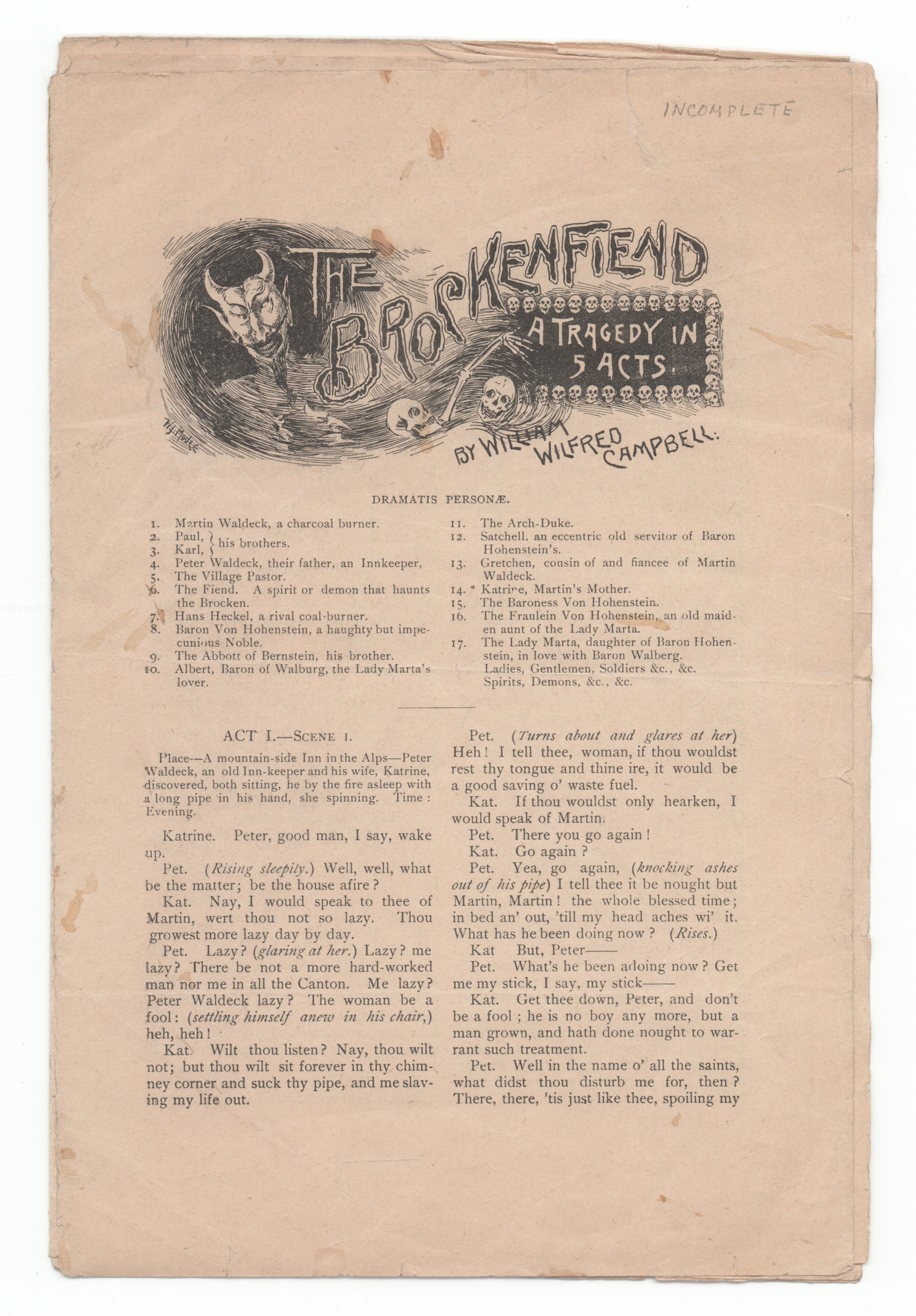 lifetime (in Mordred and Hildebrand (1895) and Poetical Tragedies (1908)) and none were ever produced on stage, even though evidence from his correspondence suggests that he was trying to find a producer for at least a couple of the dramas. His two novels, Ian of the Orcades (1906) and A Beautiful Rebel (1909), were well-received among his friends and colleagues but were neither critical nor commercial successes. Campbell also wrote several short prose pieces and had occasion to deliver a number of addresses during his literary career, many of them on imperialistic subjects. His lifelong interest in genealogy culminated in his collaboration with George Bryce on a massive scholarly work called The Scotsman in Canada (1911). 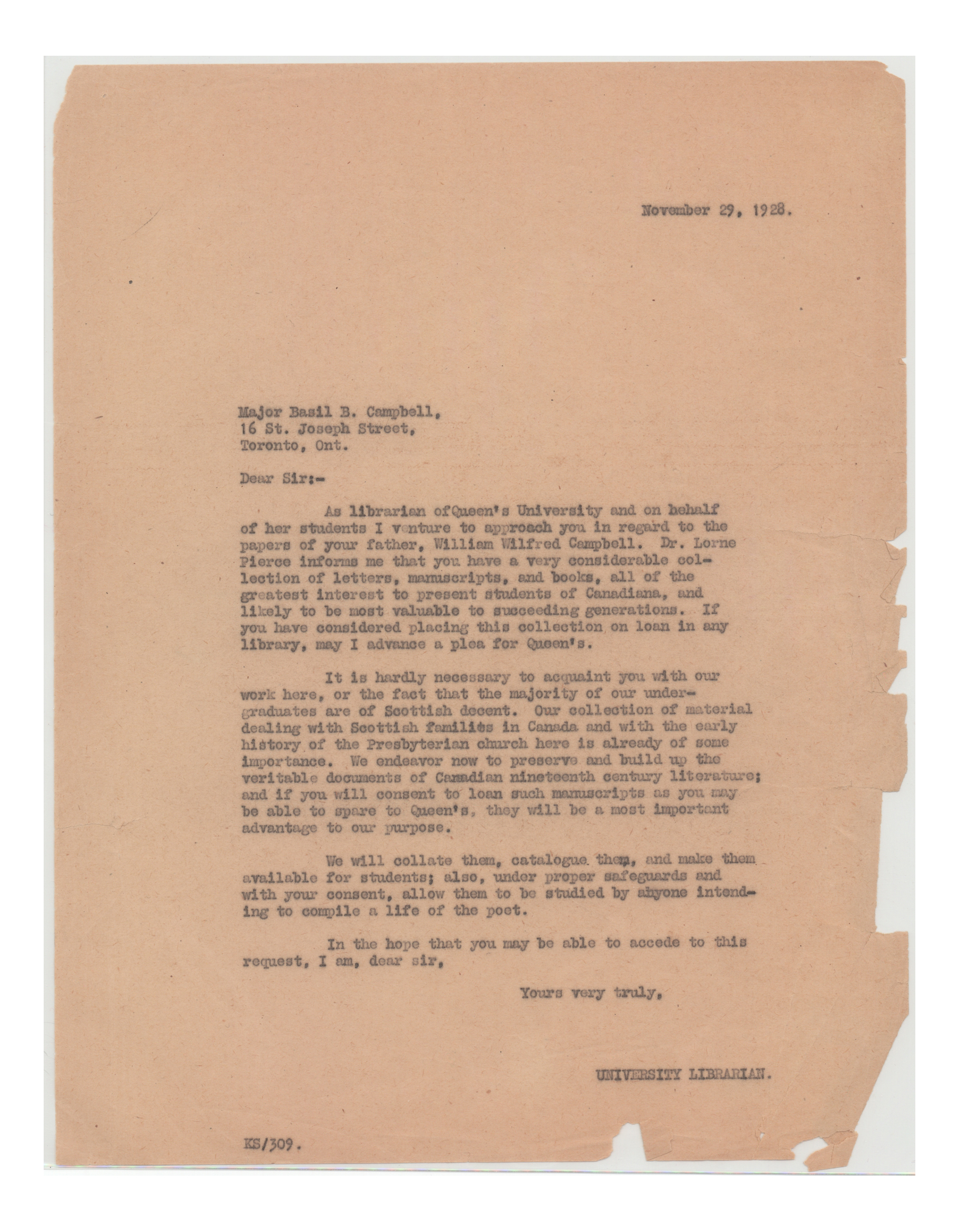 Campbell died of pneumonia on 1 January 1918. Ten years later, E. Cockburn Kyte, the Queen’s University Librarian, approached Campbell’s son Basil to ask if he might consider donating his father’s papers to the University [scan Lorne Pierce (2001.1), Box 11, F002, Flag G]. Basil Campbell agreed and over the course of the following few years sent instalments of Campbell’s papers from his home in Toronto to the Queen’s Library in Kingston. They became part of the Lorne and Edith Pierce Collection of Canadiana at Queen’s University and are now a separate fonds. One of the first people granted permission to study the papers was Carl F. Klinck, in 1931. He would go on to write the first and only biography of Campbell, Wilfred Campbell: A Study in Late Provincial Victorianism (1942), and to compile a detailed bibliography of Campbell’s writing (1942), using the Campbell papers as the foundation of his work.