Born in 1940, Maria Campbell (née June Stifle) was raised in a close-knit Métis community that existed marginally in shanties on Crown land north of Prince Albert, Saskatchewan. Halfbreed – the most acclaimed Aboriginal autobiography of the 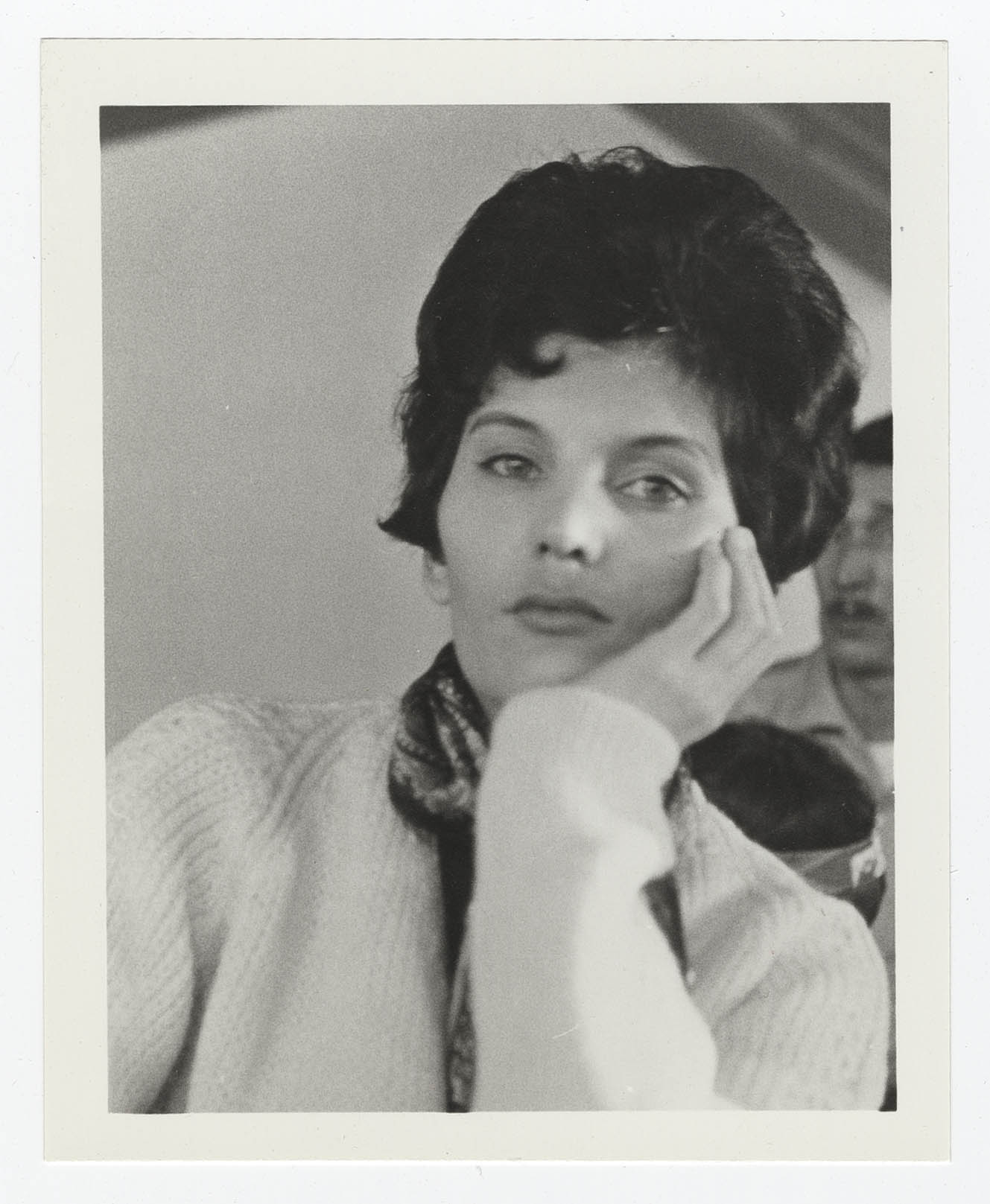 1970s – recalls Campbell’s trying, poverty-stricken childhood and early adulthood, which included a stint as a high-end prostitute in Vancouver, battles with drug and alcohol addiction, and involvement in the drug trade. Speaking to the racism and violence that she, her family, and community faced from the surrounding White and Indian populations, Campbell’s story is not merely a personal one, but also gives voice to the Métis as a whole, particularly to Métis women. 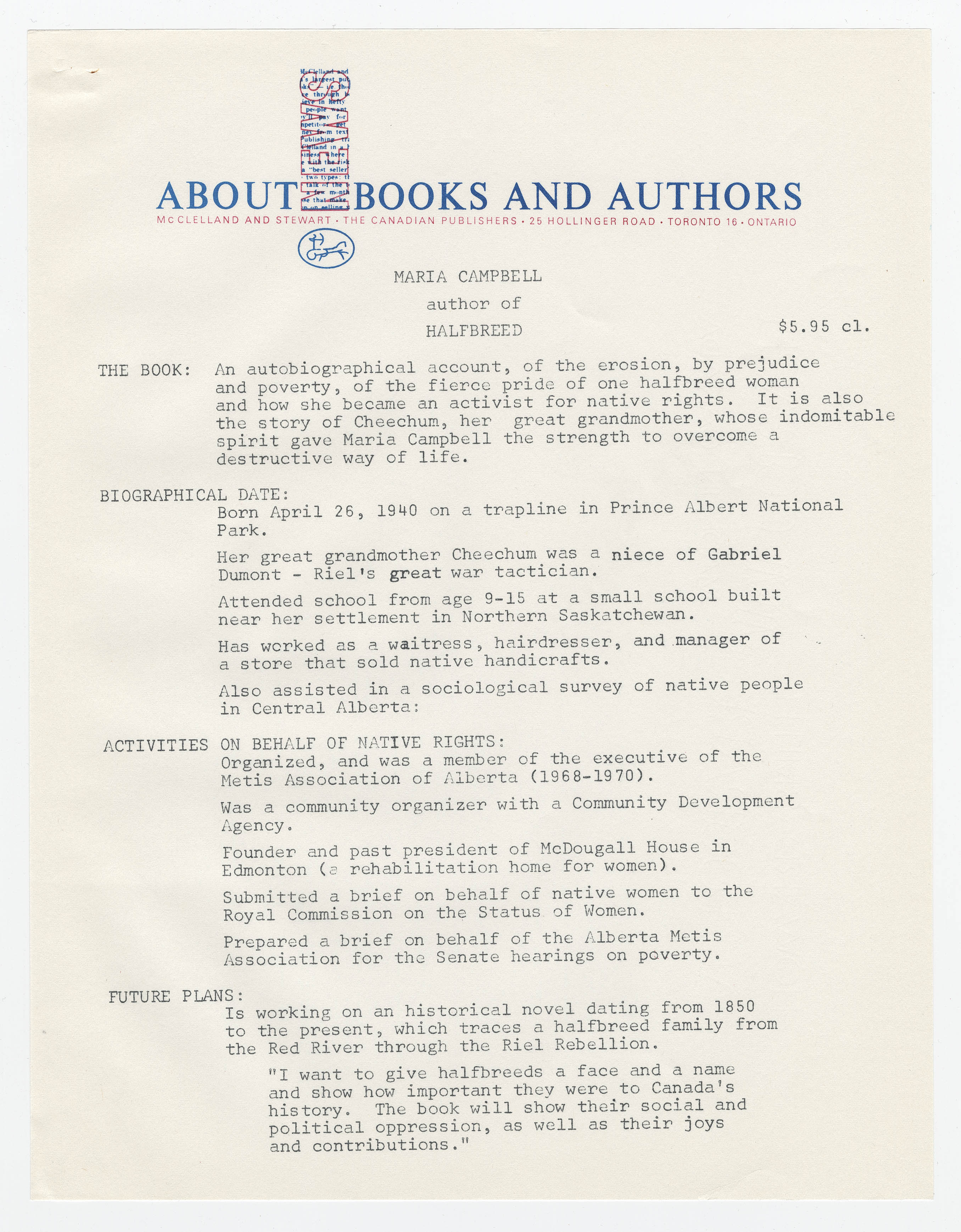 Campbell continues to write, and in all her work she has sought to “give halfbreeds a face and a name and to show how important they were to Canada’s history.” Halfbreed arose from Campbell’s frustrations and anger at the racism and discrimination that she and her family and people faced. But as Jim Douglas (of the Vancouver publishing house, Douglas & McIntyre) said to Jack McClelland in late 1971, when urging McClelland to publish Campbell’s manuscript,

In lobbying on Campbell’s behalf, Douglas asserted that the manuscript was “extraordinary … too important to follow the usual channels.” It seems Campbell had first submitted the manuscript to Douglas & McIntyre, but in an act of professional generosity, Douglas sent the work directly to McClelland, with a closing remark, “If you don’t want it I’ll send it to Macmillan and if they 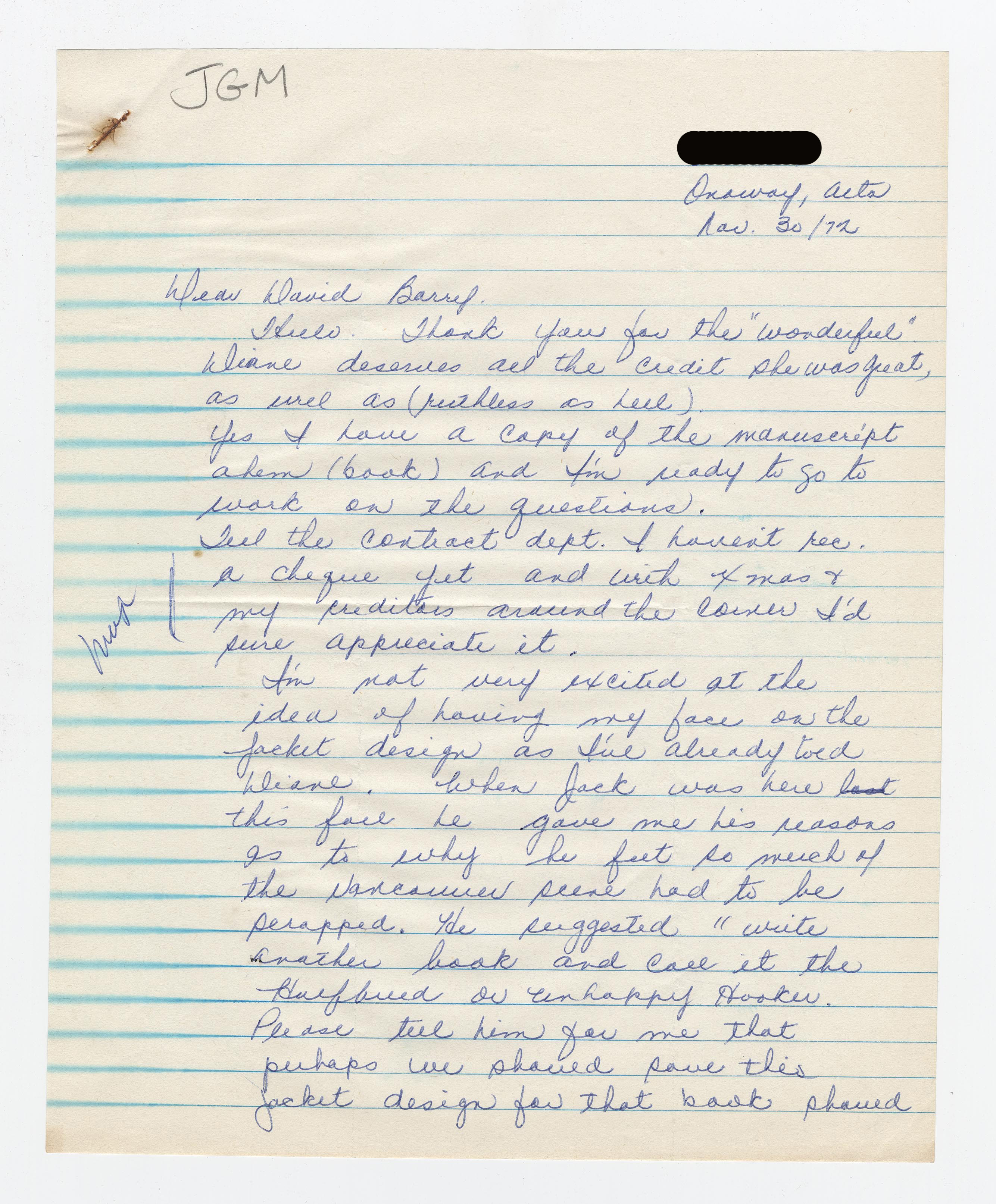 Campbell’s first draft was, in Douglas’s view, “highly libellous,” because “she names names” from her period as a high-end call girl. As one editor cautioned: “A few names [of prominent businessmen] would have to be omitted.” However, as Douglas remarked, “It needs legal editing and she would like to amend a few pages herself … but apart from that I think that editing should be kept to a minimum. Not only is the content important but the style and language should have significance to sociologists and students of the problems she exemplifies.”

McClelland’s initial reaction to Campbell’s manuscript was positive, yet cautious. In a long letter to Douglas, McClelland agreed that the manuscript 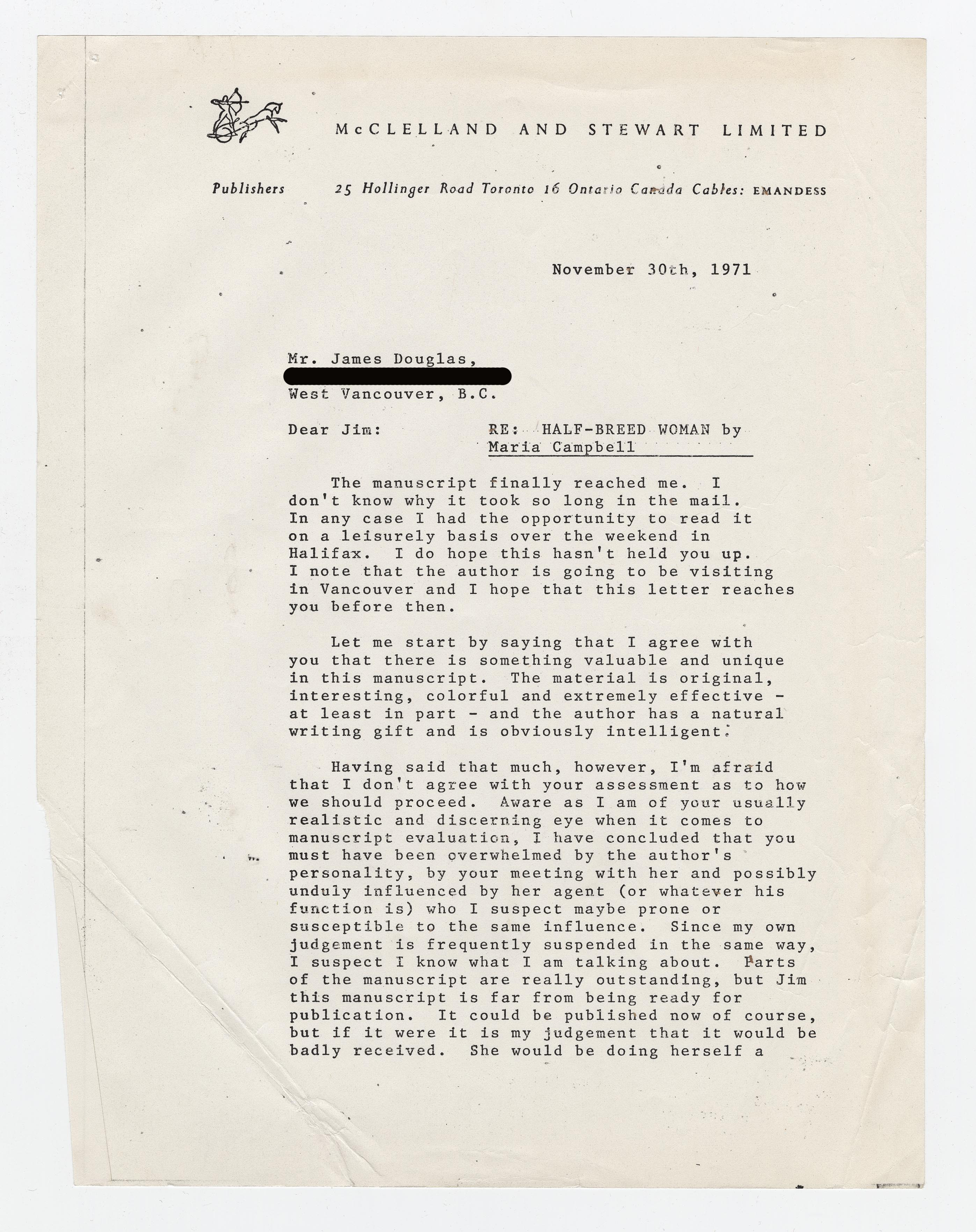 was “valuable and unique … original, colorful [sic] and extremely effective,” but concluded that the work was “far from being ready for publication. It could be published now of course, but if it were it is my judgement that it would be badly received.” In other words, “It is good enough that it could create a real impact but let me repeat, not in its present form.” McClelland’s criticisms were not specifically aimed at Campbell’s writing, but he felt her style and content lacked a focus. At times he could not make the connection between Campbell’s misfortunes and her status as a Métis – particularly her drug addiction and troubles with “other men’s wives.” The latter he interpreted as having to do with “her being an attractive, unattached woman,” noting, “The same experience has been faced by hundreds of thousands of women throughout the world.” In McClelland’s assessment, these experiences and their “implied connection” to the fact that she was Métis would cause the reader to lose sympathy with her. Like Douglas, McClelland was leery that the manuscript “named names” and he also took issue with the reference to an alleged rape involving members of the RCMP – McClelland was certain the law enforcement agency would seek an injunction stopping distribution if the alleged incident were to be included in the book; less than a year before the book’s publication, he sought legal advice, which led him to the conclusion that M&S “could not safely include this incident. Her lawyer tells her that we could. I would like to include it if we can, but I am still of the opinion that it could lead to an injunction.” On 13 January 1973, less than two months after McClelland sought this advice, and only months before Halfbreed was published, the Globe & Mail broke a story of alleged RCMP harassment and sexual misconduct against Métis women in Saskatchewan. Nonetheless, the RCMP incident was not included in the published edition of Campbell’s book. 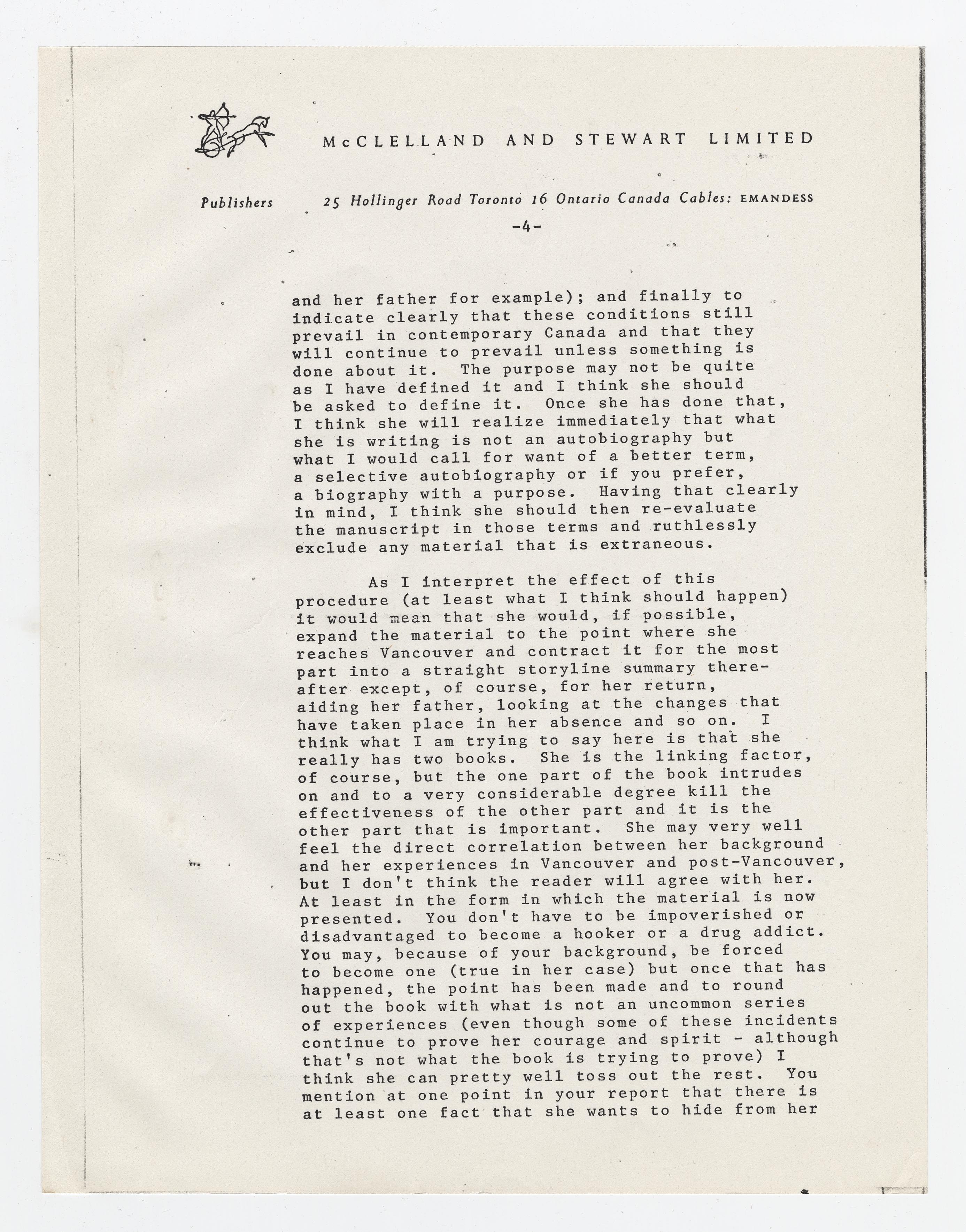 McClelland’s earlier criticisms were key to transforming Halfbreed from a simple autobiography into a book speaking to the larger issues of discrimination, poverty, and oppression faced by the Métis and the plight of Métis women in particular. Suggesting major revisions, McClelland’s insight was that if given a more focussed purpose, Campbell would “realize immediately that what she is writing is not an autobiography but what I would call for want of a better term, a selective autobiography or if you prefer, a biography with a purpose.” He indicated that if the author did not agree to undertake these extensive changes, he would pass the manuscript to Macmillan of Canada, but at the same time he admitted: “this is really outstanding material. She is so successful in melding the horrors of it with the joyful aspects of it … that I am satisfied that she has the nucleus of a truly remarkable book here. I think it could be made into a national bestseller if she is prepared to give it the additional effort that it deserves.” And as editor David Berry stated to McClelland: “More than once in corresponding to Jim Douglas on this book you cited Farley Mowat’s principle that the truth is more important than the facts: I think Ms. Stifle would be very responsive to this approach.” 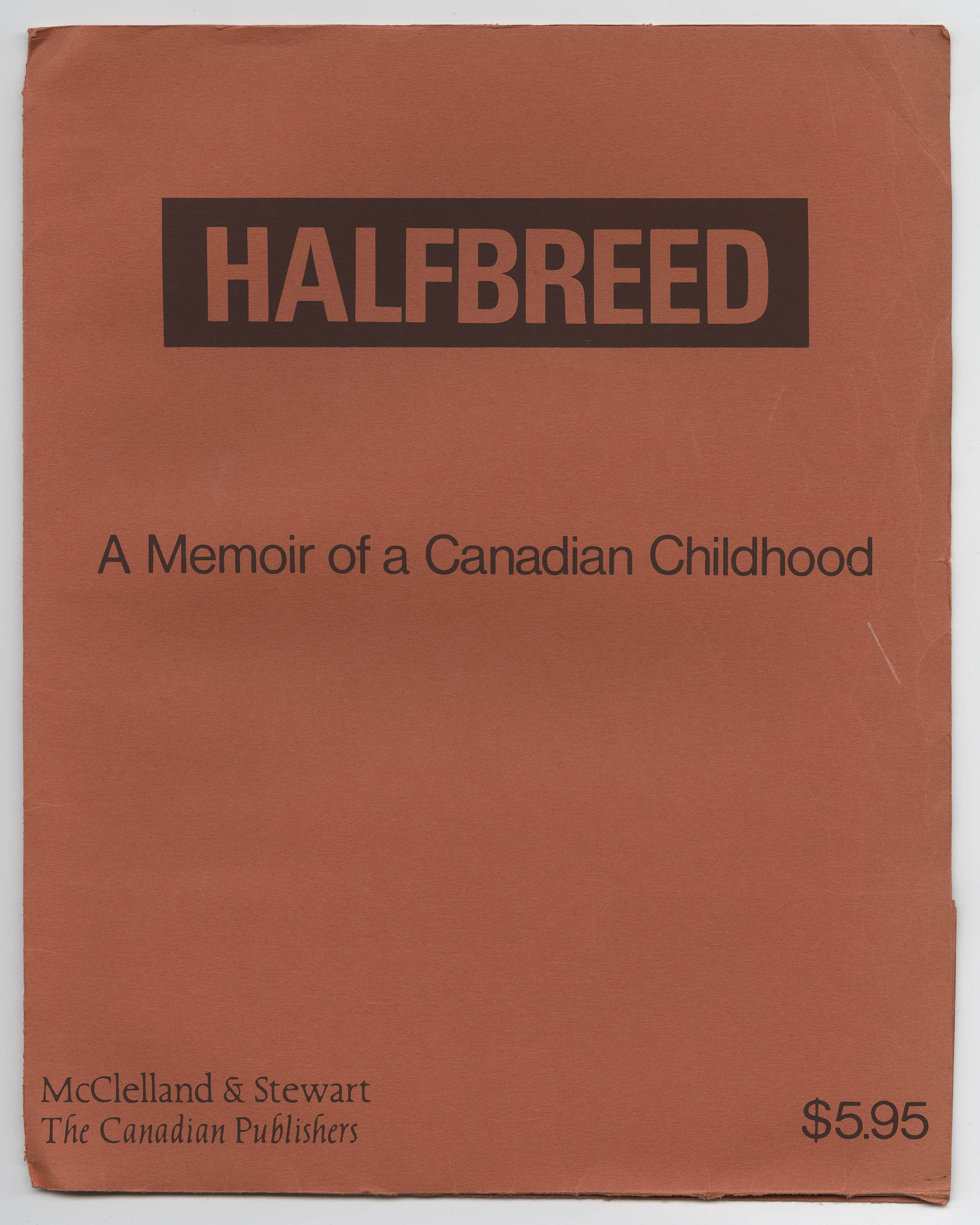 McClelland’s observations on the book were astute. Campbell revised the manuscript, and early reviews of Halfbreed by the public and scholars were enthusiastic. As Shirley J. Small, Assistant Professor of Sociology at the University of Toronto, remarked in a letter on file in the M&S archives, “On the level of human feelings this is one of the most powerful books I have ever read. In addition it is a truly outstanding contribution to an understanding of Canadian institutions. In my opinion it ranks with Claude Brown’s autobiography Manchild in the Promised Land.” Rudy Wiebe mused in Quill & Quire: “This book is required reading. Here speaks a voice never heard before with such direct frankness, such humor [sic]: the voice of the true Canadian woman.” Used widely upon publication in university classes Canada-wide, and re-issued in paperback, Halfbreed is still widely recognised as a first-rate case study of race and ethnic relations in Canada.