Nora Keeling: The Life of a Short Story Writer

Nora Keeling (1933-2008) was a short story writer from London, Ontario. She was affiliated with Oberon Press, which published her three short story collections: The Driver (1982), Chasing Her Own Tail (1985), and A Fine and Quiet Place (1987). As well, she was represented by Jack McClelland for two years (1988-90) during his brief stint as a literary agent and consultant.

Nora Keeling was born in Owen Sound, Ontario, on 25 December 1933. A talented actor, Keeling studied alongside Albert Finney and John Stride after 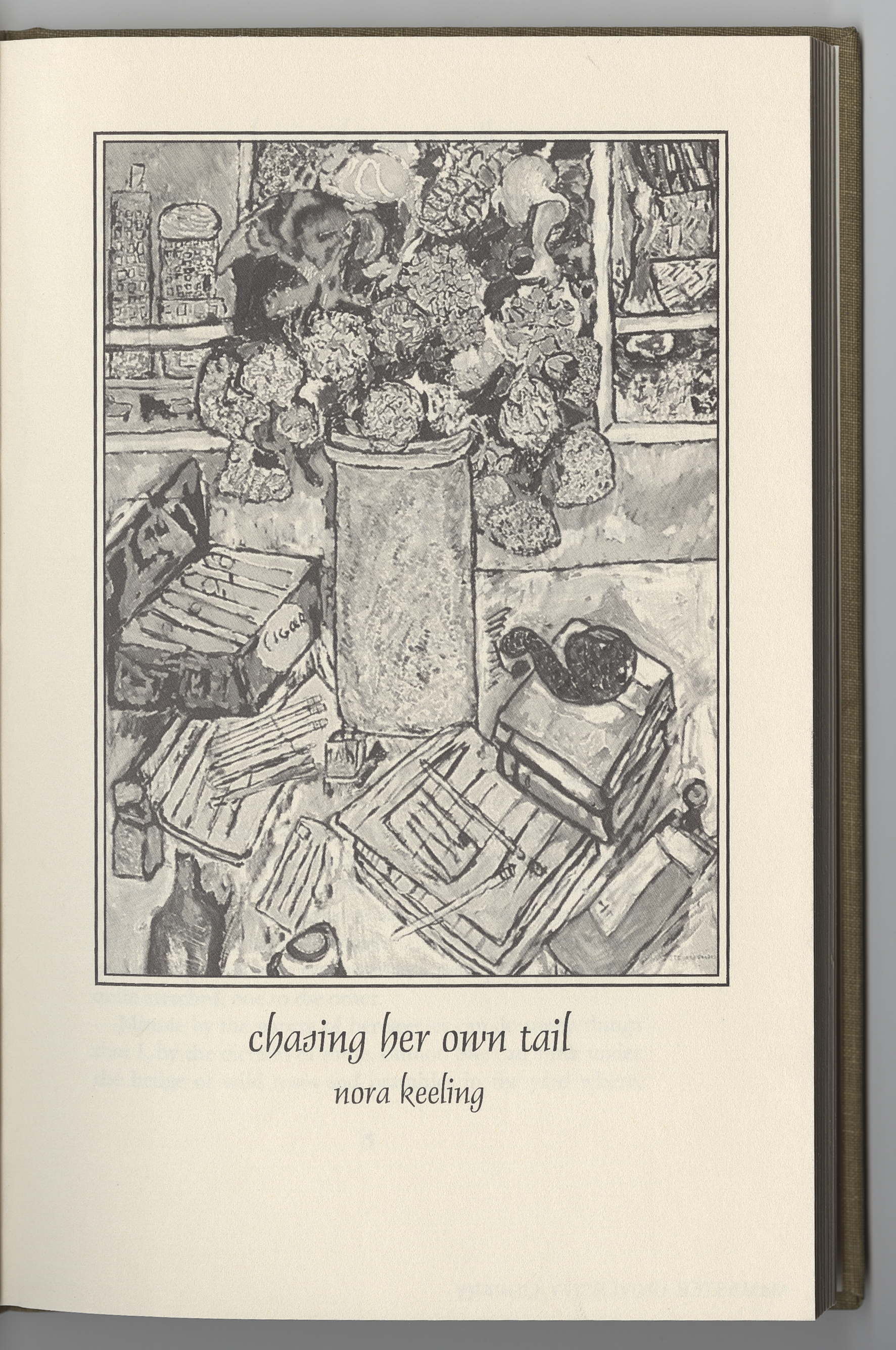 earning a scholarship at the Royal Academy of Dramatic Art in London, England, where she also worked for playwright Christopher Fry.

Her archives at Queen’s University reveal a very personal relationship with Dilshad Engineer and Nick Macklem, the husband and wife team who, with Michael Macklem, operated Oberon during the time of Keeling’s affiliation with the Press. Keeling frequently sent gifts to the couple’s children, and her correspondence with Engineer and Macklem shows a balance between business and pleasure. Engineer also worked hard to assist Keeling in obtaining several grants from the Canada Council, as well as frequent Ontario Arts Council allotments. Despite these fundraising efforts, Keeling incurred many financial challenges throughout her career.

A feeling of “shooting in the dark” pervades the collected correspondence in Keeling’s archives. For example, in a letter written 20 August 1973 from author and literary scholar David Helwig – who also happened to be Keeling’s brother- 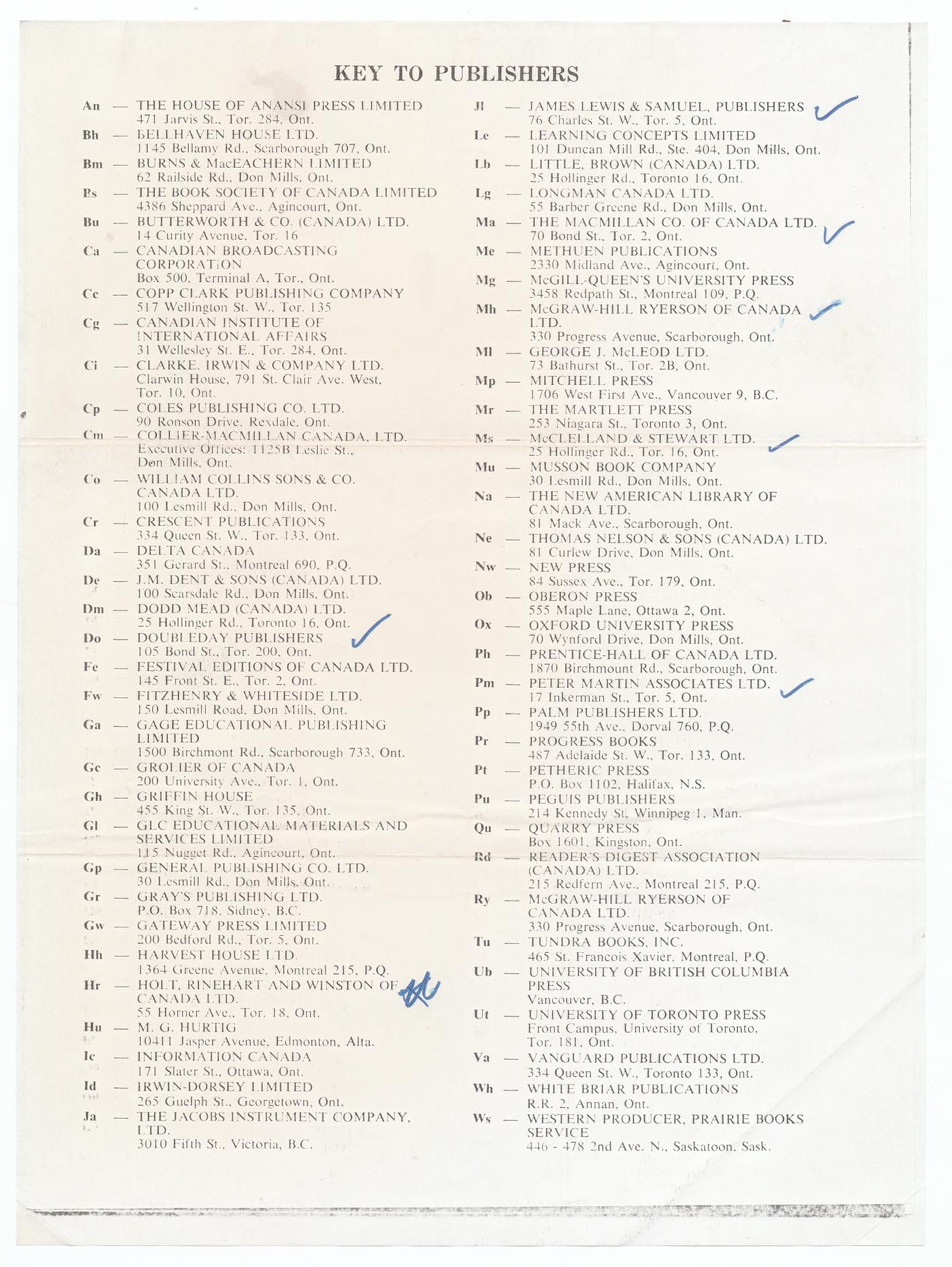 in-law and acted as her unofficial editor for a number of years – a list of possible publishers is recommended. Helwig writes: “don’t know if one is much better than another.” The list includes Doubleday; James Lewis & Samuel; Macmillan of Canada; McClelland & Stewart; and Peter Martin Associates. Helwig can also be credited with getting Keeling her first break: his existing and longstanding relationship with Michael Macklem eased Oberon’s acceptance of the manuscript of The Driver. As Helwig wrote on 30 December 1980:

My sister-in-law, Nora Keeling is sending you a large manuscript of stories. The core of a book, I think, is in a long story/memoir which is different that [sic] most of the rest of what she’s written. I haven’t seen the final draft, but I think it’s probably very good. I’ve probably seen most of the stories, but over ten years, and I can’t really remember just what’s there, though I’m sure a number of them are good … I do think that the memoir is the basis of a book.

Published by Oberon in 1982, The Driver is no longer in print in Canada. The “long story/memoir” to which Helwig refers is Keeling’s story “Memoir: To Guy” which is based on the five years that she spent in Paris – “painting, writing, and acting” – during the 1950s. 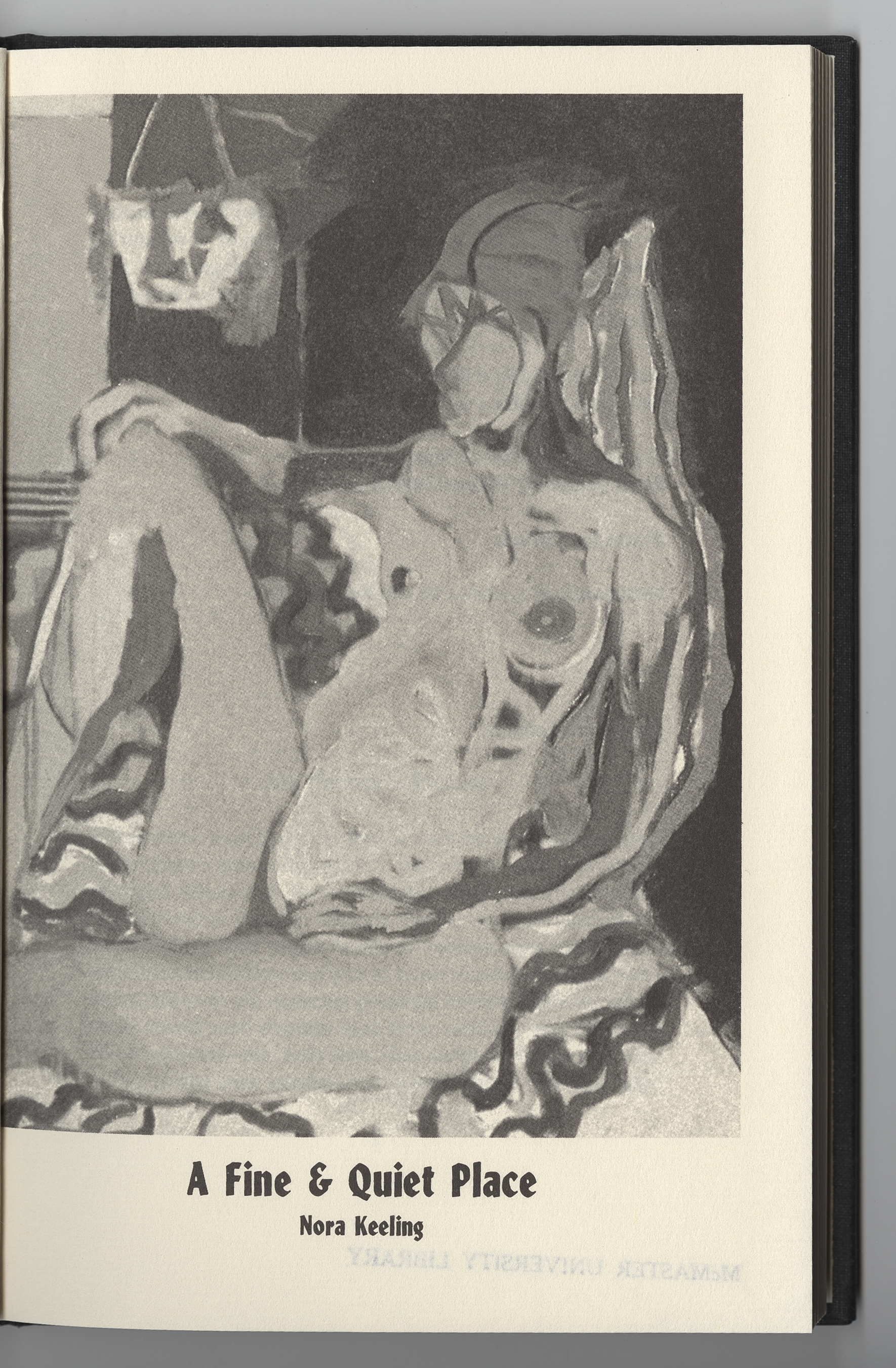 Keeling became distracted from her work during the late 1980s and wrote significantly less after the publication of A Fine and Quiet Place in 1987; a legal battle after the death of her husband lasted well into the 1990s and appears to have taken up much of her energy. Keeling’s relationship with Oberon Press ended in 1990 when Keeling was represented by Jack McClelland. Her writing decreased during this period, and although there was significant discussion with McClelland of putting together another collection of short stories to be published by McClelland & Stewart, nothing came to fruition.

Keeling’s correspondence from the late 1980s and early 1990s contains a selection of letters to various reviewers and publishing houses, either urging them to read her work, or admonishing them for not returning copies of her books in a timely fashion; aside from publishers, book critic Ken Adachi of the “Hogtown [i.e. Toronto] Star” was a favorite target of her epistolary wrath. Based on the change in tone of her correspondence over the years, it is clear that a massive void was left in Keeling’s career with the dissolution of her relationship with Oberon Press. Her correspondence reflects an increasing level of frustration with the slow process of the (frequent) submission of manuscripts and (rare) publication. 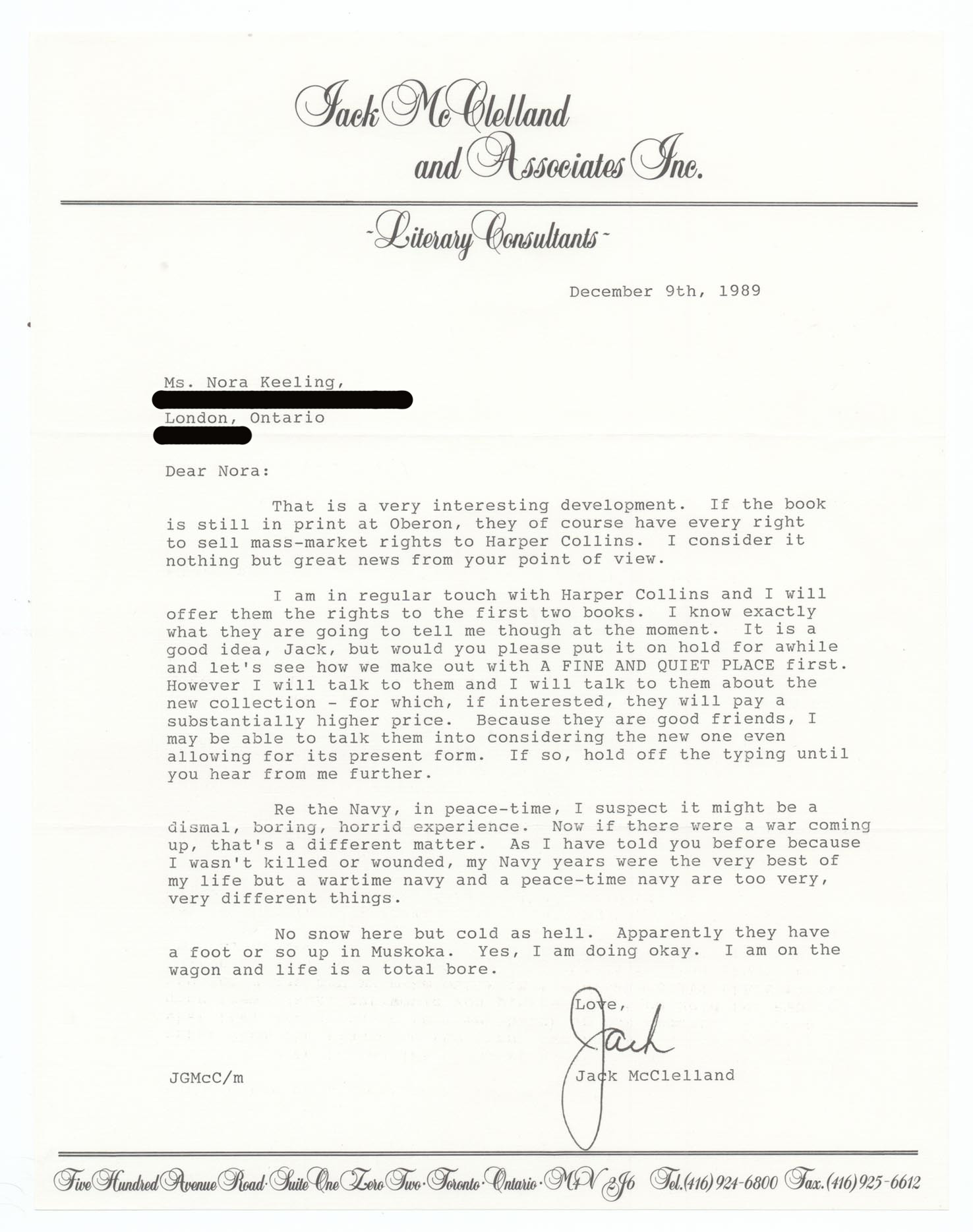 As noted above, Keeling was represented by publishing-magnate-turned-literary-agent, Jack McClelland from 1988 to 1990. This was after McClelland had sold M&S and established Jack McClelland and Associates Literary Consultants, a Toronto-based literary agency which operated from 1987 to 1989. Keeling kept up a frequent correspondence with McClelland throughout these years. As with her Oberon letters, the exchanges between McClelland and Keeling are both professional and personal, so one finds, in the same letter, references to each other's health along with discussions concerning recent manuscripts.

In a letter to McClelland on 20 December 1988, Keeling writes, ‘I’d like you to send “Neither a Satan” to the New Yorker or some other U.S.A. magazine that is well-known. That’s the way that Alice Munro’s agent did it.” It is clear that Keeling wished to emulate the success of her contemporary, Alice Munro, and Munro’s literary agent, Virginia Barber, as a strategy of advancing her own literary career. However, as one may infer from a letter written by The New Yorker’s fiction editor Roger Angell, achieving this level of international recognition was more difficult than it appeared. 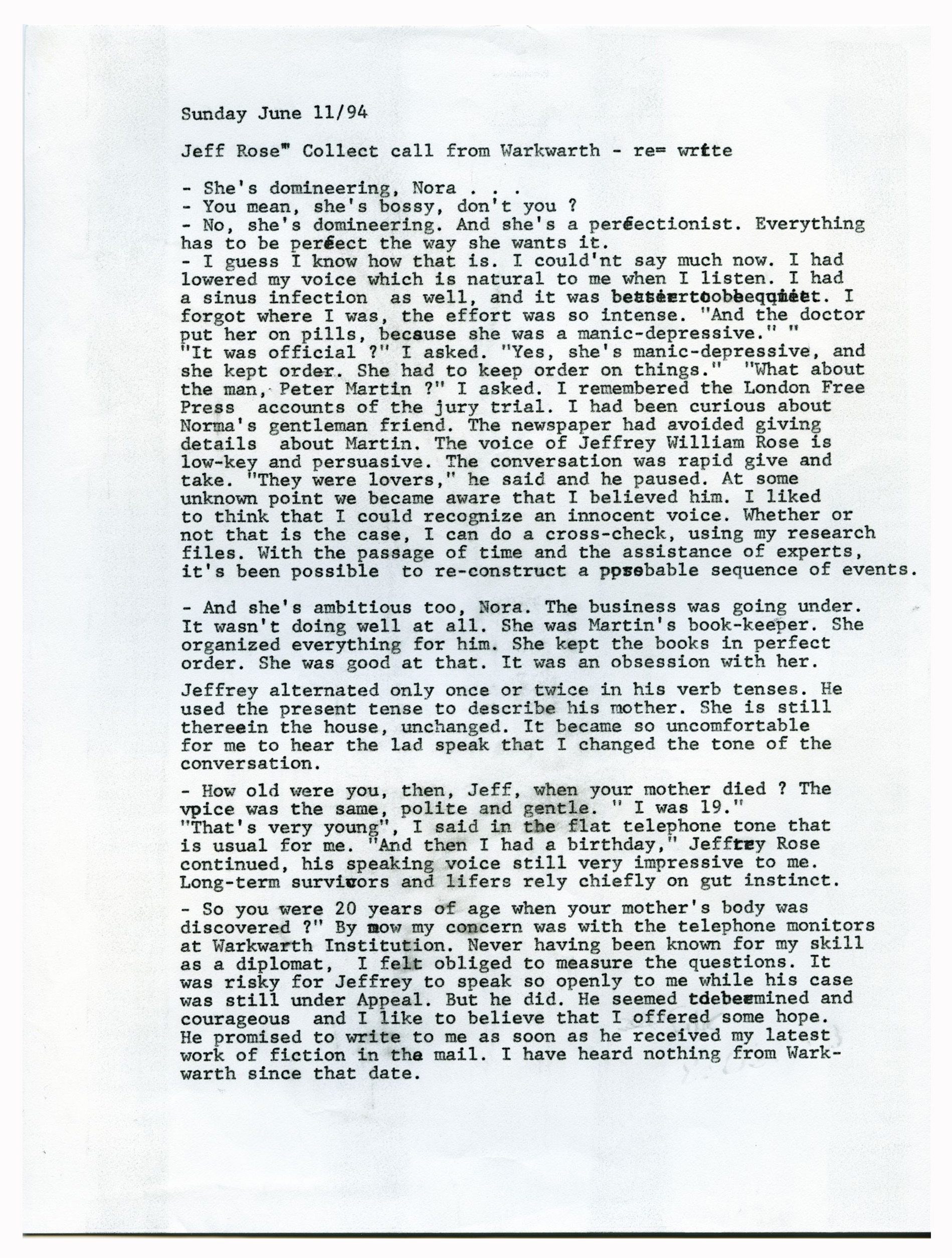 The later period of Keeling’s career as an author was preoccupied with compiling notes for a non-fiction book on crime in the London, Ontario region. Keeling’s archives contain several notebooks of research, including extensive newspaper and press clippings surrounding local criminal trials which she had hoped to eventually publish in a book called Painful World. Unfortunately, her fascination with the criminal scene in London was never synthesized into any form of manuscript, and the project appears to have been abandoned when the last of Keeling’s archives were donated to Queen’s University in 1998. Nora Keeling died of lung cancer on 4 March 2008.