The Poet and the Publisher: Duncan Campbell Scott and Lorne Pierce

Duncan Campbell Scott enjoyed a long and congenial publishing relationship with Lorne Pierce of the Ryerson Press, as over twenty years of correspondence between the two men attests. Scott was never shy, however, about speaking his mind when he disagreed with Ryerson’s vision for his work.

In the early 1920s, Lorne Pierce, long-time editor of the Ryerson Press in Toronto, conceived the idea of an award to honour Canadian literary work. He approached Duncan Campbell Scott, who by this time was an established writer and a Fellow of the Royal Society of Canada. Pierce had been corresponding intermittently with Scott for several years about various literary 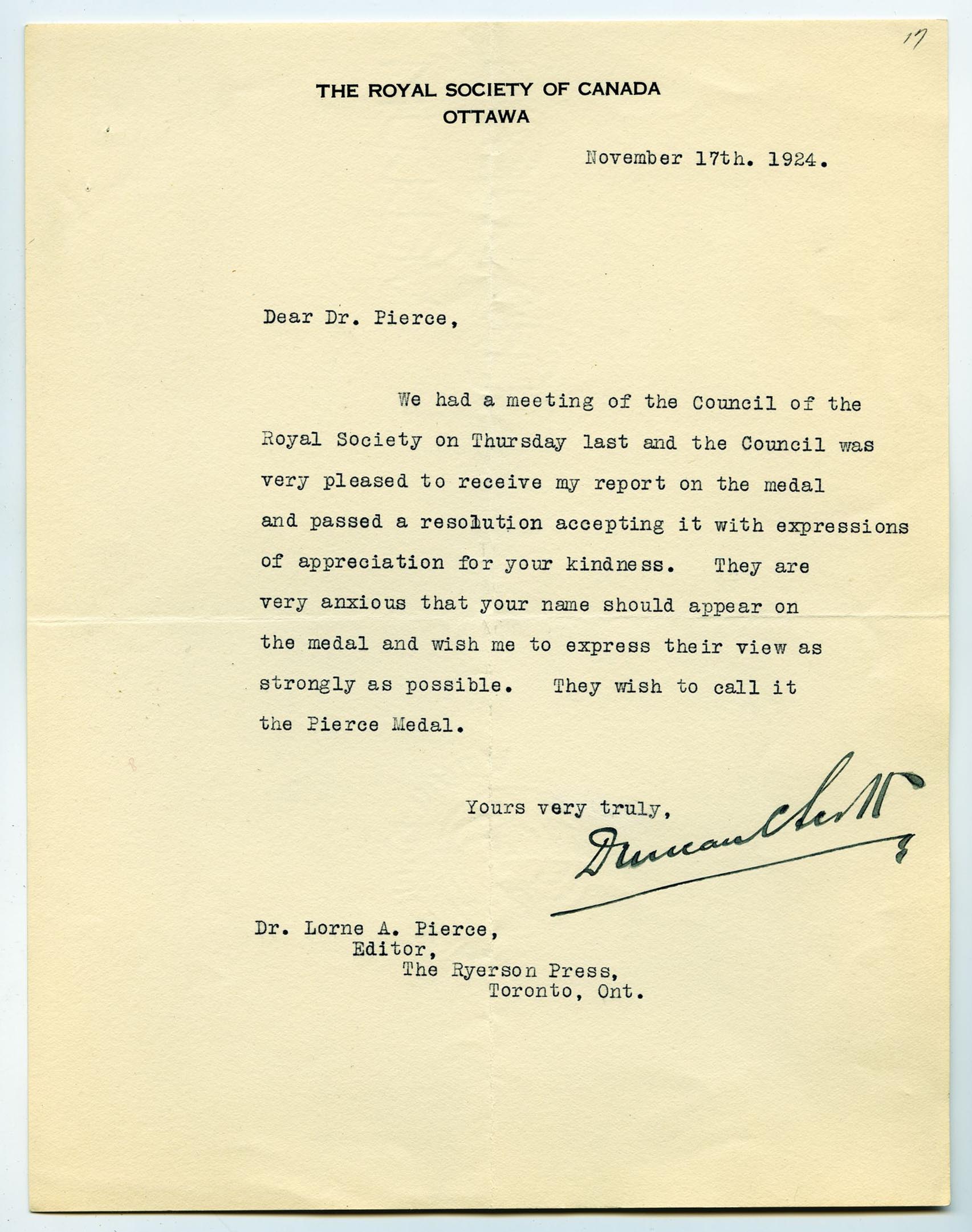 matters (Scott was, for example, Archibald Lampman’s literary executor for many years), but their earliest regular correspondence involved the creation, design, and administration of the award, which the Royal Society dubbed the Lorne Pierce Medal. The first recipients of the Medal were a veritable who’s who of Canadian letters: Charles G.D. Roberts (1926), Scott himself (1927), and Bliss Carman (1928). The publicity garnered by the Medal did much to raise public awareness of Canadian literature, and the Royal Society continues to recognize the outstanding achievements of Canadian writers by awarding the Lorne Pierce Medal every two years.

Perhaps the most significant publishing project Scott undertook with Pierce was the publication of an illustrated Canadian edition of Scott’s first book of short stories, In the Village of Viger. Copeland and Day, a small, Boston-based speciality press, had published the first edition of the book in 1896, but Scott wished to bring the book back into print for a Canadian audience. Scott had tried to place the book with McClelland & Stewart in 1926, 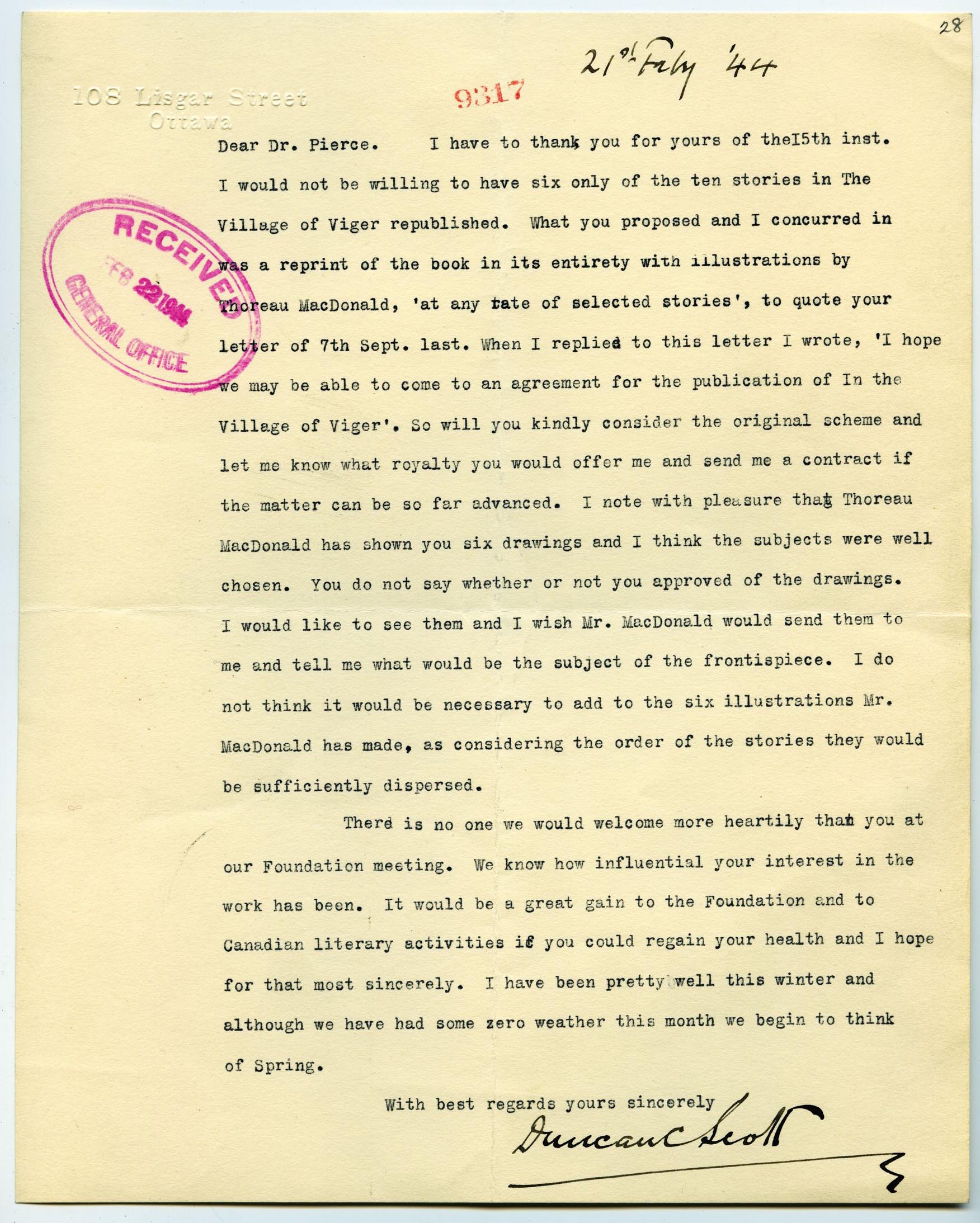 but nothing came of it. Pierce, who was an ardent admirer of Scott’s work, embraced the project with enthusiasm, though things got off to a rocky start when Pierce suggested cutting Scott’s ten stories down to six. “I would not be willing to have six only of the ten stories … republished,” Scott brusquely replied (Letter to Pierce, 21 February 1944); “it should be kept as it was originally issued if it is to be reprinted in Canada” (Letter to Pierce, 15 March 1944). Pierce acceded to Scott’s demand by assuring him that Ryerson would “do everything possible to co-operate” with him (Letter to Scott, 21 March 1944), and by giving him unprecedented control over every aspect of the book’s physical production—control that would be unheard of today.

Scott exercised this control with relish, insisting that Thoreau MacDonald—an accomplished artist who had illustrated and designed numerous books to critical acclaim—send him sample drawings for his scrutiny. MacDonald’s seeming reluctance to respond to Scott’s letters detailing his 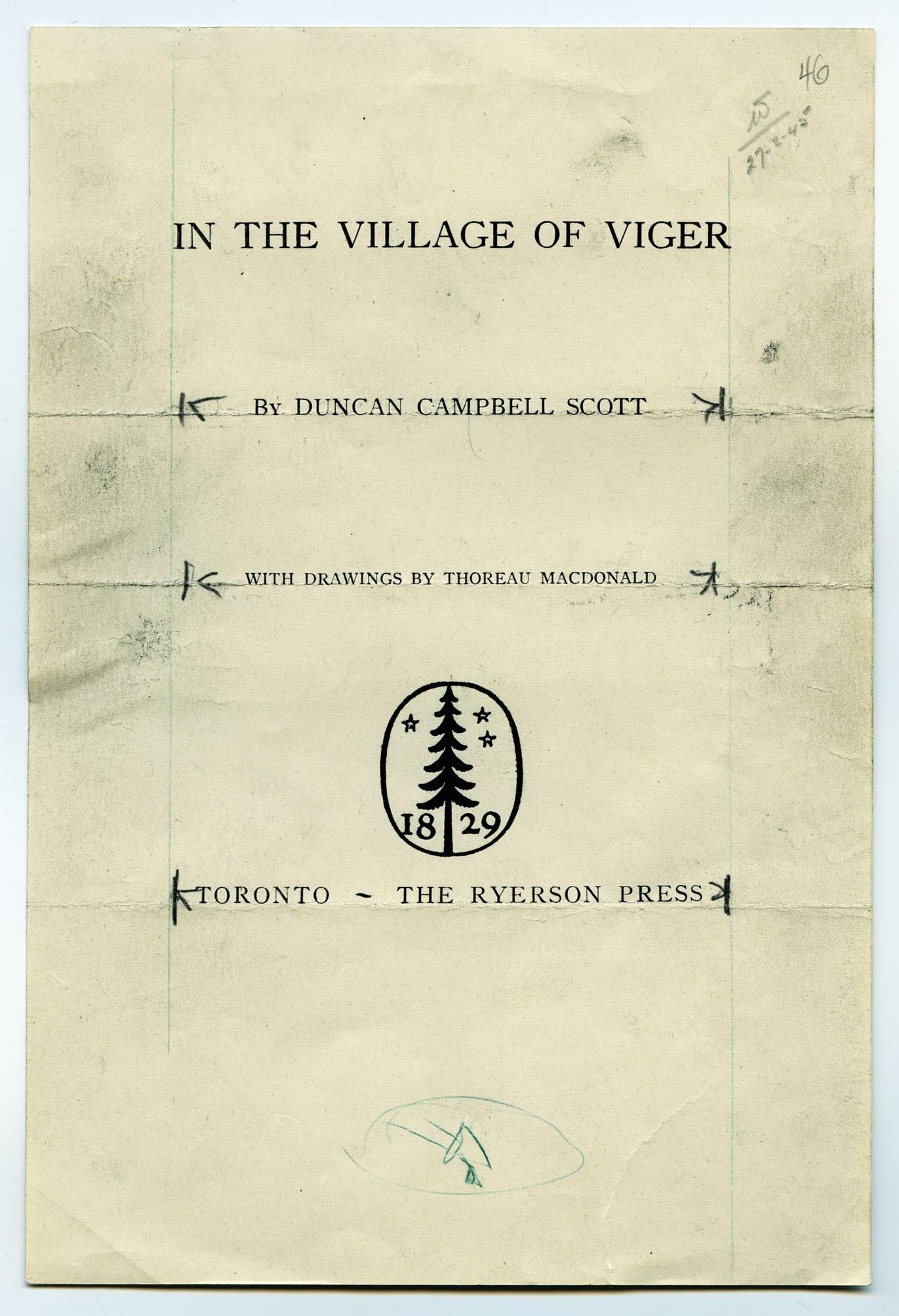 suggestions for improvements may have been a subdued expression of annoyance at Scott’s editorial heavy-handedness, though Pierce always managed to smooth things out between Scott’s and MacDonald’s strong artistic personalities. Scott also exchanged a series of sometimes testy letters with Ryerson’s assistant editor, Frank Flemington, to hammer out details of the book’s physical production, including the type of paper stock, the design of the title page, and even the colour, grade, and texture of cloth for the hardback binding. When Flemington sent him a sample of a high-grade blue cloth, Scott’s displeasure was unambiguous: “I dislike this shade of blue…. I would rather wait indefinately [sic] until we found the right thing rather than use this blue, or any blue, which I really dislike” (Letter to Flemington, 29 December 1944, emphasis in original). He reiterated this opposition “to a BLUE of any shade” in a letter to Pierce several days later (14 January 1945, emphasis in original). 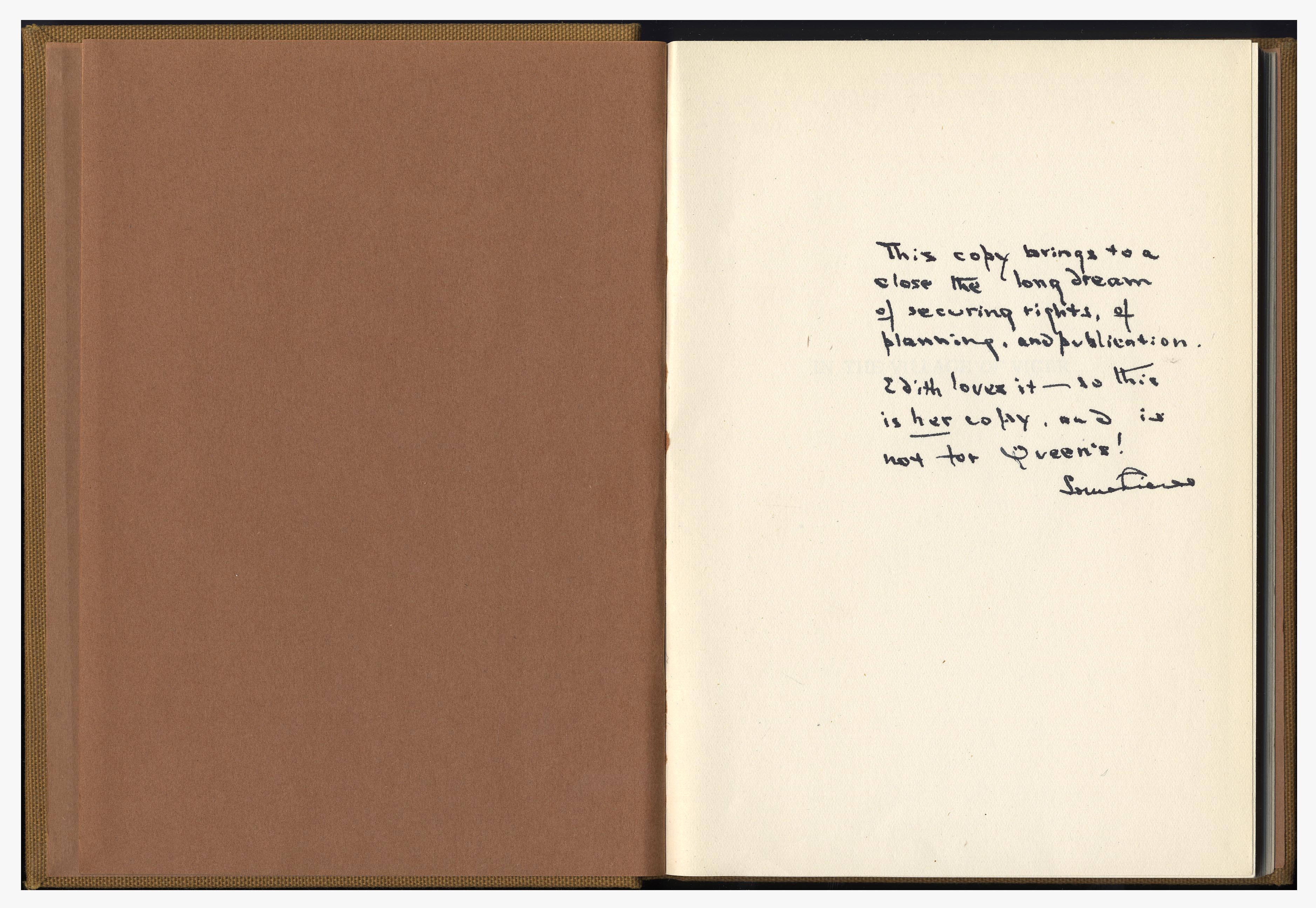 Despite everyone’s efforts, the book was not an overwhelming commercial success. It is clear, however, that Pierce saw the book not so much as a commercial proposition but as a tribute to one of his favourite authors. On the flyleaf of his personal copy, Pierce wrote, “This copy brings to a close the long dream of securing rights, of planning, and publication”. Scott would continue to work closely with Pierce throughout the 1940s, producing works such as Lampman’s Selected Poems for 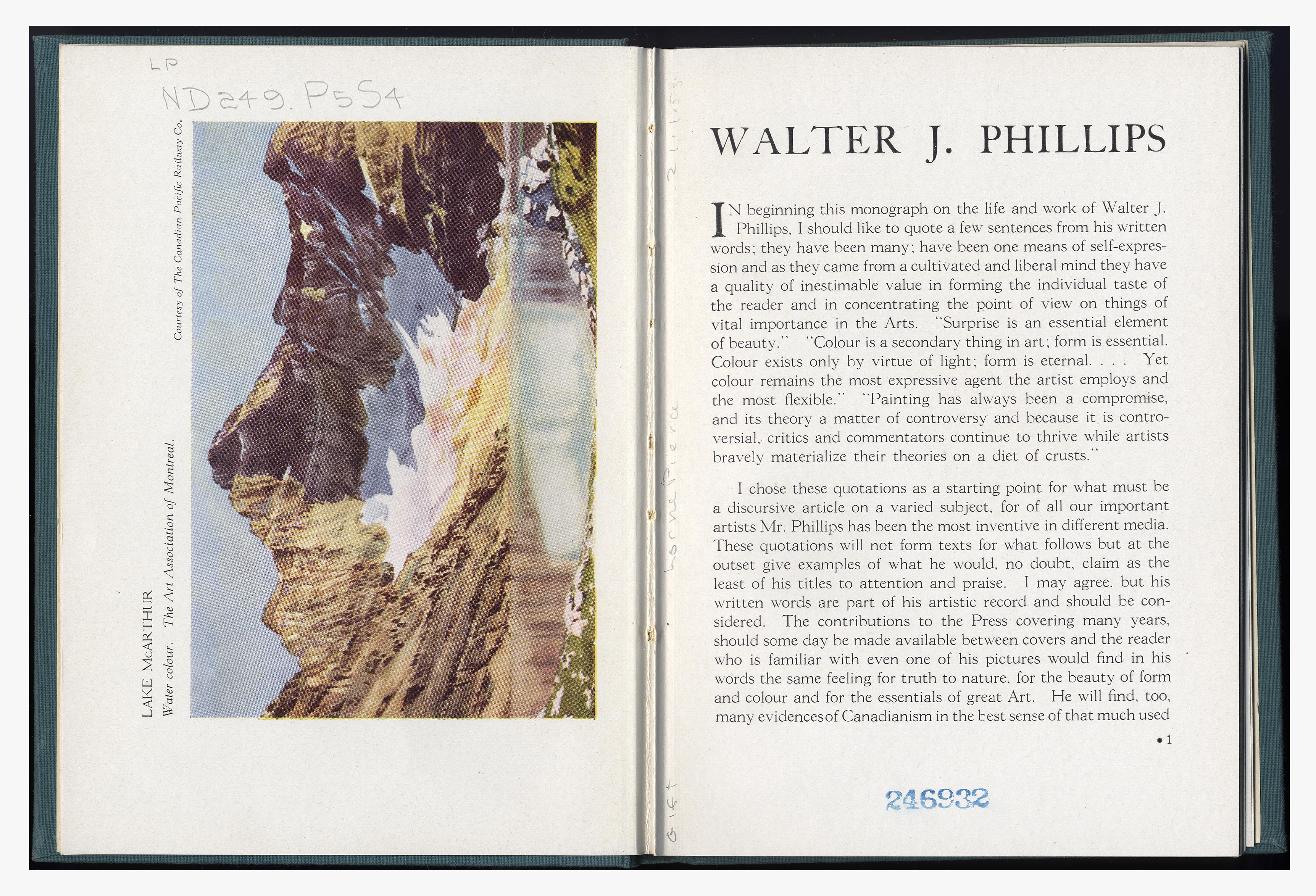 Ryerson’s Library of Canadian Poets series and a lavishly illustrated monograph on the painter Walter J. Phillips for Ryerson’s Canadian Art series. Both books appeared in 1947, just a few months before Scott’s death.

In 1949, Scott’s widow Elise approached Pierce to see if Ryerson would be interested in publishing a selected edition of his poetry. Pierce was enthusiastic about the proposal but was doubtful that it would be possible because McClelland & Stewart held the copyright on Scott’s poetry and was apparently planning its own commemorative edition. Elise Scott was 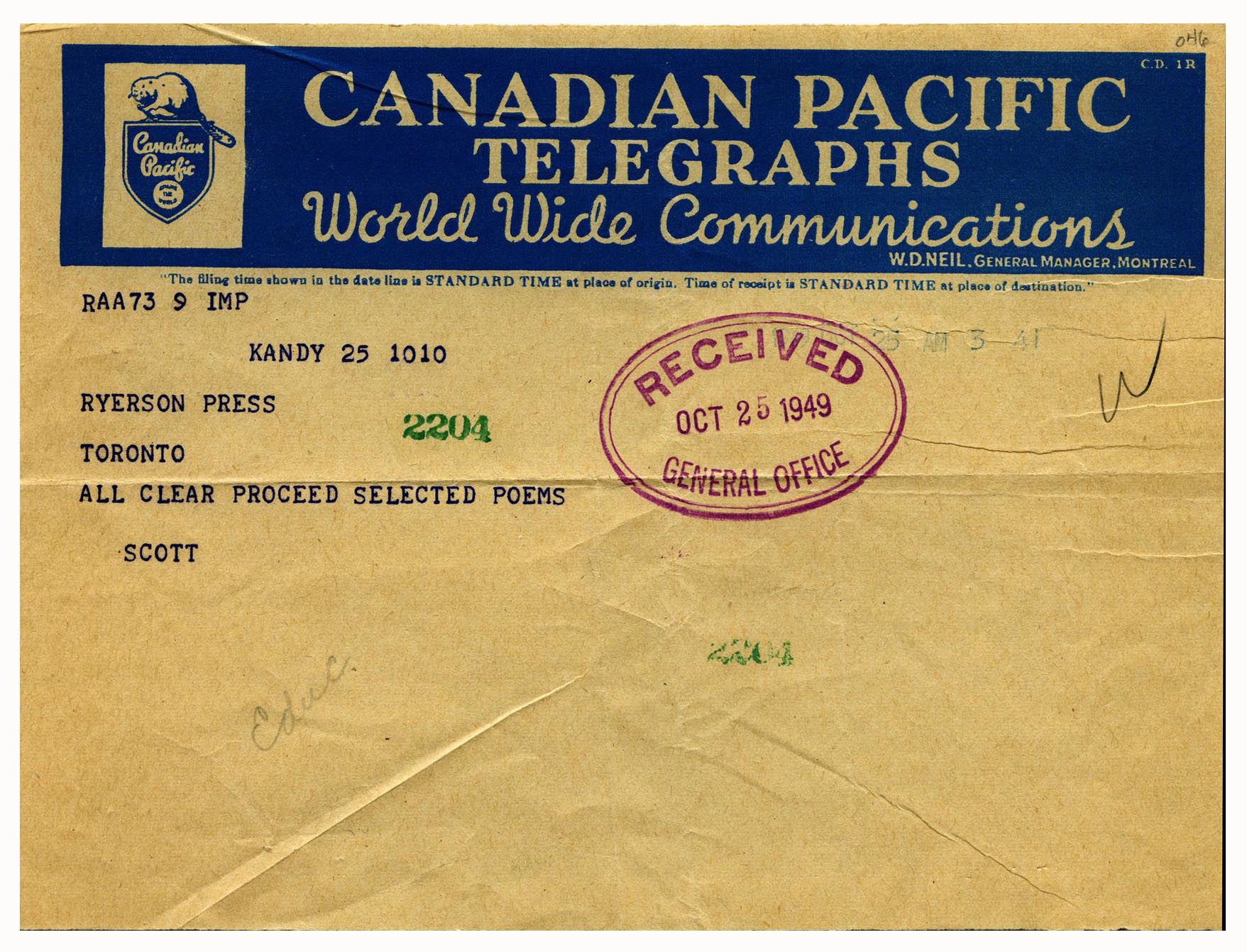 determined, however, to have Ryerson issue the book, probably owing to her recognition of the closeness of Scott’s relationship with Pierce over the years. At first, McClelland & Stewart would not reply to her queries, but after she began to contemplate a lawsuit, the way was soon made clear for Ryerson to proceed. The book appeared in 1951 as the Selected Poems of Duncan Campbell Scott, published with a touching memoir of the poet by his friend, the critic and professor E.K. Brown. Scott and Brown carried on a lively literary correspondence during the closing years of Scott’s life (see Robert L. McDougall’s fine edition of their letters), and so it was only appropriate that Brown pay tribute to Scott’s many and varied contributions to Canadian literature.

—., ed. Some Letters of Duncan Campbell Scott, Archibald Lampman, and Others. Ottawa: the editor, 1959.

McDougall, Robert L., ed. The Poet and the Critic: A Literary Correspondence Between D.C. Scott and E.K. Brown. Ottawa: Carleton UP, 1983.