Charles G.D. Roberts (1860-1943) was the first of the Confederation poets, the loosely associated group of Canadian poets who came to prominence in the last two decades of the nineteenth century. His Orion and Other Poems (1880) inspired the others, especially his cousin Bliss Carman, Archibald Lampman, and Duncan Campbell Scott. In “Two Canadian Poets: A Lecture,” Lampman recalled that, as an undergraduate at the University of Toronto, he “sat up all night reading and re-reading Orion in a state of the wildest excitement ... It seemed to me a wonderful thing that such work could be done by a Canadian, by a young man, one of ourselves.”

Roberts’s best years as a poet occurred between 1885 and 1895, when he taught at King’s College in Nova Scotia

and published his translation of Philip Aubert de Gaspé’s The Canadians of Old (1890), two guide-books (1891 and 1895), two Acadian romances (1894), and two collections of poetry: In Divers Tones (1886), which includes his most famous poem, “The Tantramar Revisited”; and Songs of the Common Day (1893), which includes “Ave,” an ode for the Shelley centenary, and a sequence of thirty-seven sonnets. Most of those titles were published abroad, and many of the poems had previously appeared, at first in such Canadian journals as the Week and Rose-Belford’s Canadian Monthly, and then, especially after 1888, in such American journals as Atlantic and the Independent. Roberts published in Canada throughout his career, but at the end of the nineteenth century he was one of several Canadian writers who enjoyed the greater income and wider circulation that American and British journals provided. 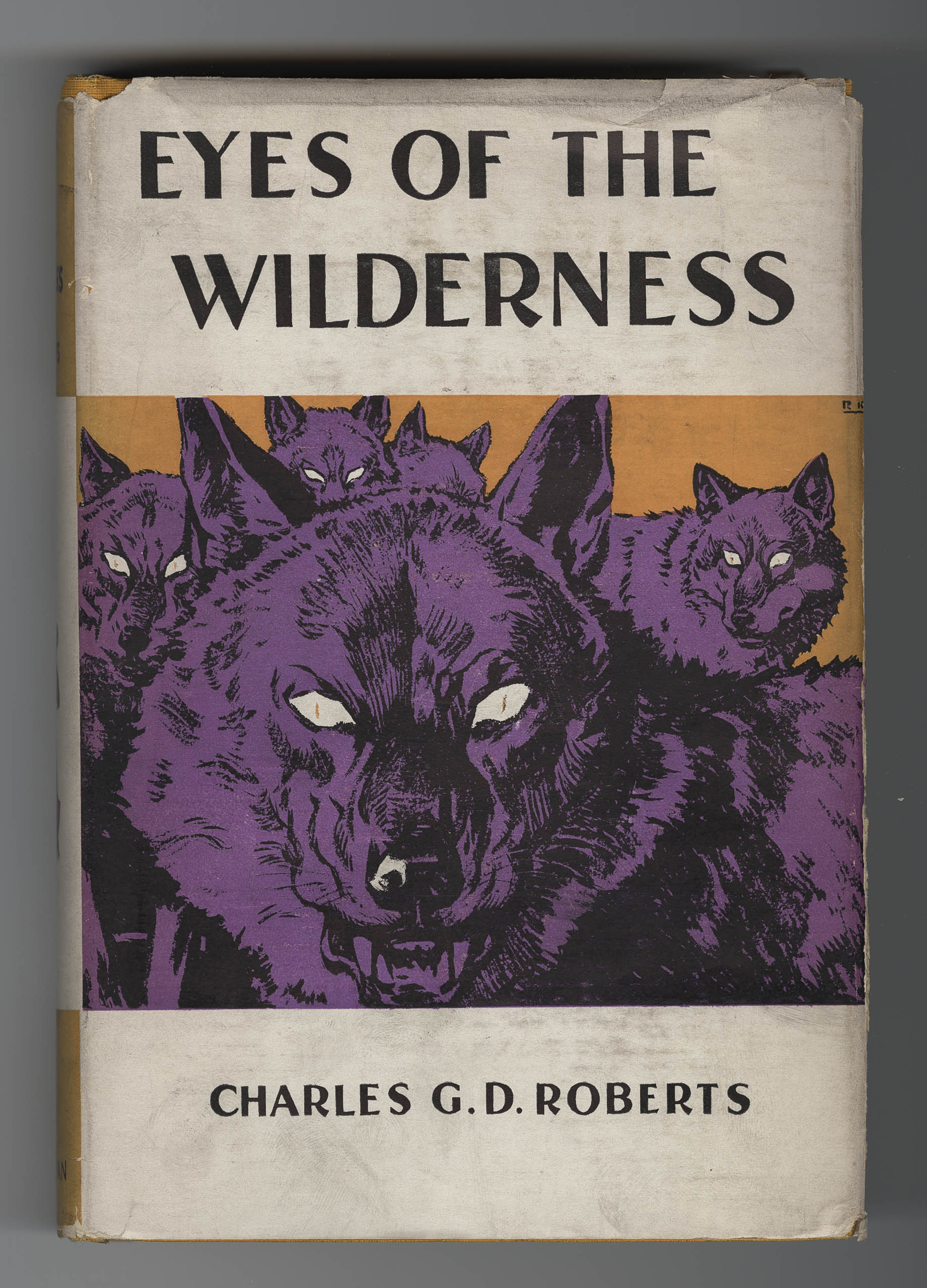 His first animal story, “Strayed,” appeared in Harper’s Young People in 1889, and his income from subsequent stories (he wrote over two hundred during the next three decades) enabled him to move to New York in 1897. As John Coldwell Adams notes in Charles God Damn: The Life of Sir Charles G.D. Roberts, at one point the poet was called to the White House by Theodore Roosevelt to discuss the realism of these stories. From 1896 to 1906, Roberts wrote a history of Canada, five historical romances, and his most well-known novel, The Heart of the Ancient Wood (1900). During these years he worked to advance other Canadian writers, though an envious William Wilfred Campbell felt that Roberts did more for Carman, Lampman, and Roberts than for Campbell. Roberts moved to London in 1907, and served as first lieutenant of the 16th Battalion of the King’s (Liverpool) Regiment in the 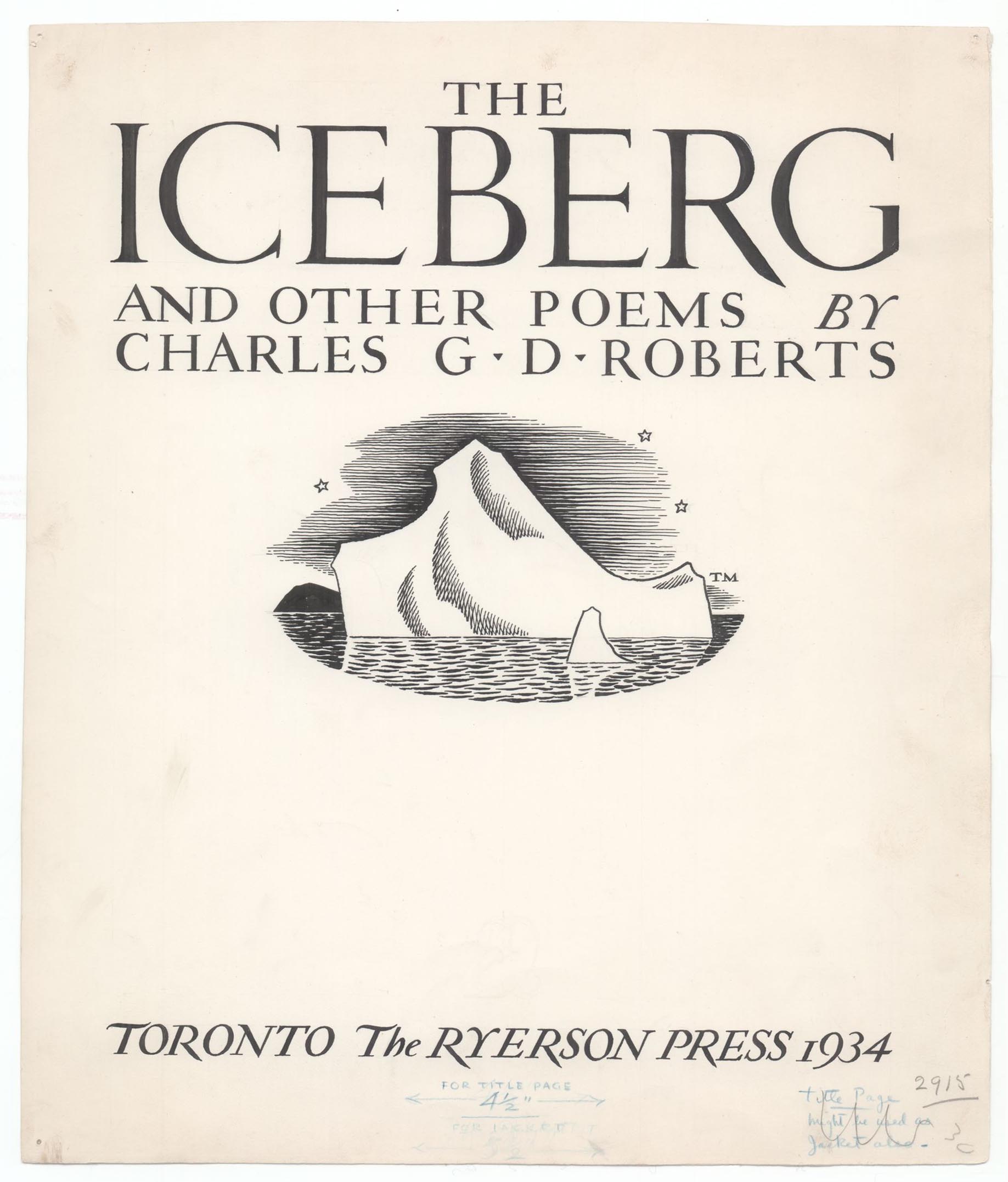 First World War. When he returned to Canada in 1925 his international reputation was in decline. His later collections of poetry were published by Ryerson Press. In a letter of 28 January 1926, Roberts thanks Lorne Pierce of Ryerson Press “for all the rich help and stimulus which you have been to me.” Other Ryerson publications included The Iceberg and Other Poems (1934, with illustrations by Thoreau McDonald), and an anthology of patriotic poetry, Flying Colours (1942), which he edited. Roberts also wrote the introduction for Macmillan of Canada’s edition of E.J. Pratt’s poetry (Verses of the Sea, 1930). Roberts was knighted and granted a pension by Prime Minister R.B. Bennett in 1935, and remarried in the last year of his life. 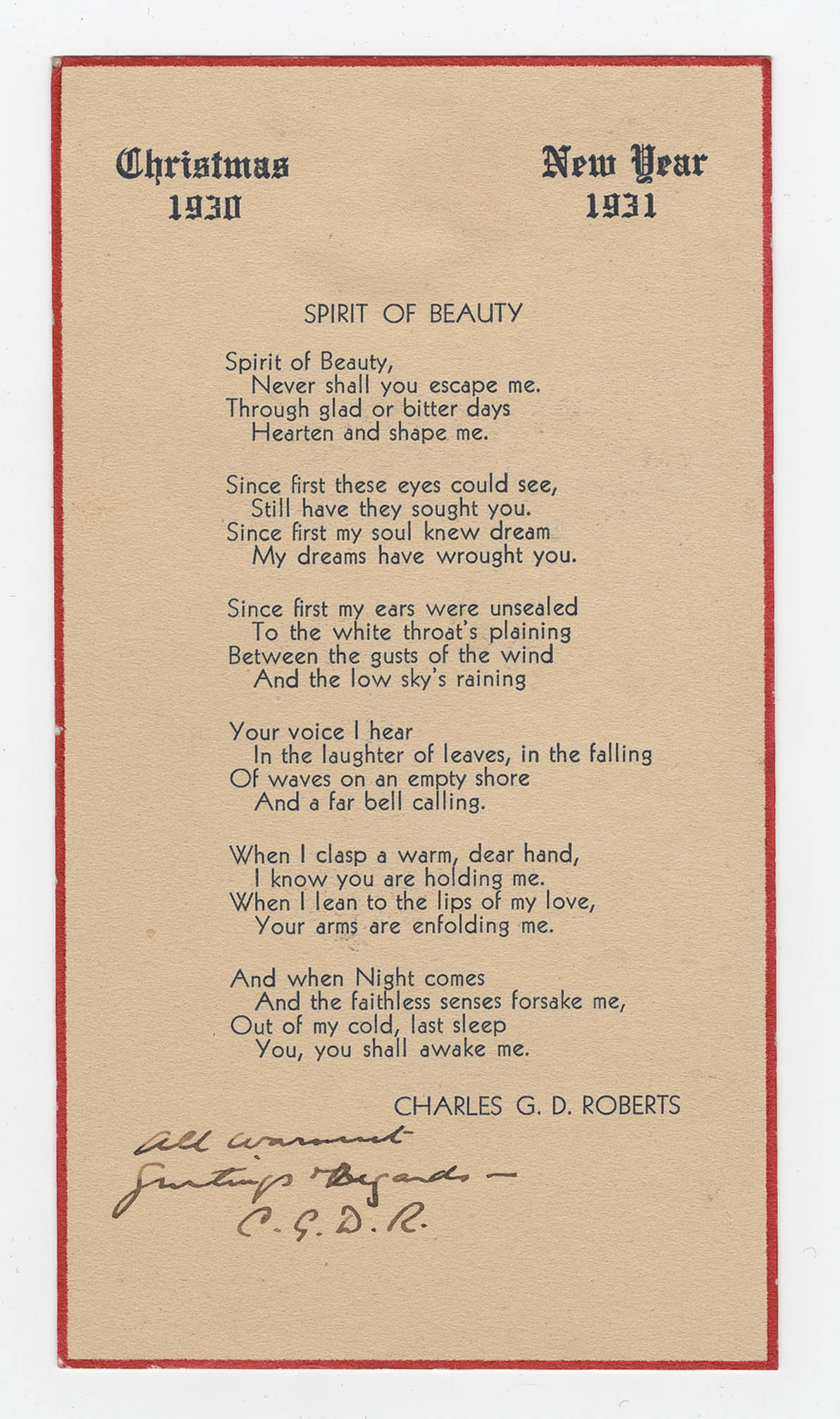 Roberts’s career shows both the possibility and the difficulty of making a living as a writer. Always a nationalist, he nonetheless moved to New York to be close to the important journals and publishers. His poetry earned international acclaim but little money. His fiction sold well, but his financial status was often precarious, in part because he led, by all accounts, a riotous life.

Correspondence in the Charles G.D. Roberts fonds at Queen’s University Archives, which includes such correspondents as Dorothy Livesay and Lorne Pierce, also reveal the author’s plans for various publications. In three 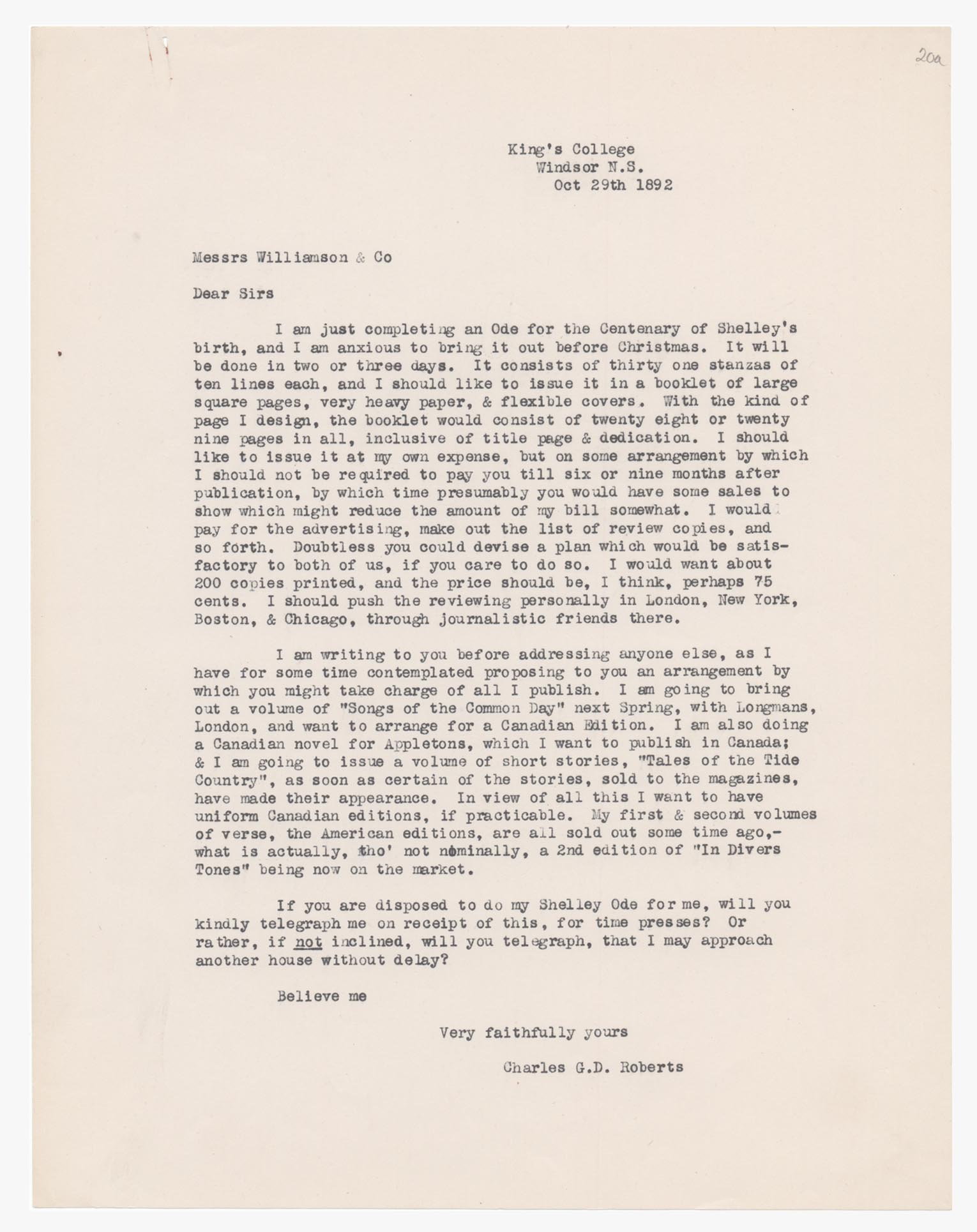 letters from 1892, he commissions a privately-printed edition of “Ave” and arranges for the Williamson Book Company of Toronto to handle distribution. On 13 January 1893, Roberts asks Williamson to publish a two-volume edition of his short stories, but no such collection appeared. Two years later, he asks Stone and Kimball (Cambridge, Massachusetts) to publish Earth’s Enigmas, which was eventually issued by Lamson, Wolffe of Boston. In a letter to Charles Mair of 10 March 1886, Roberts writes, “I have hitherto considered my own poetry the best yet done in Canada. But Tecumseh is better.”

In addition to correspondence, the fonds includes notes, proofs, and galleys for The Vagrant of Time (1927), The Iceberg and Other Poems (1934), Selected 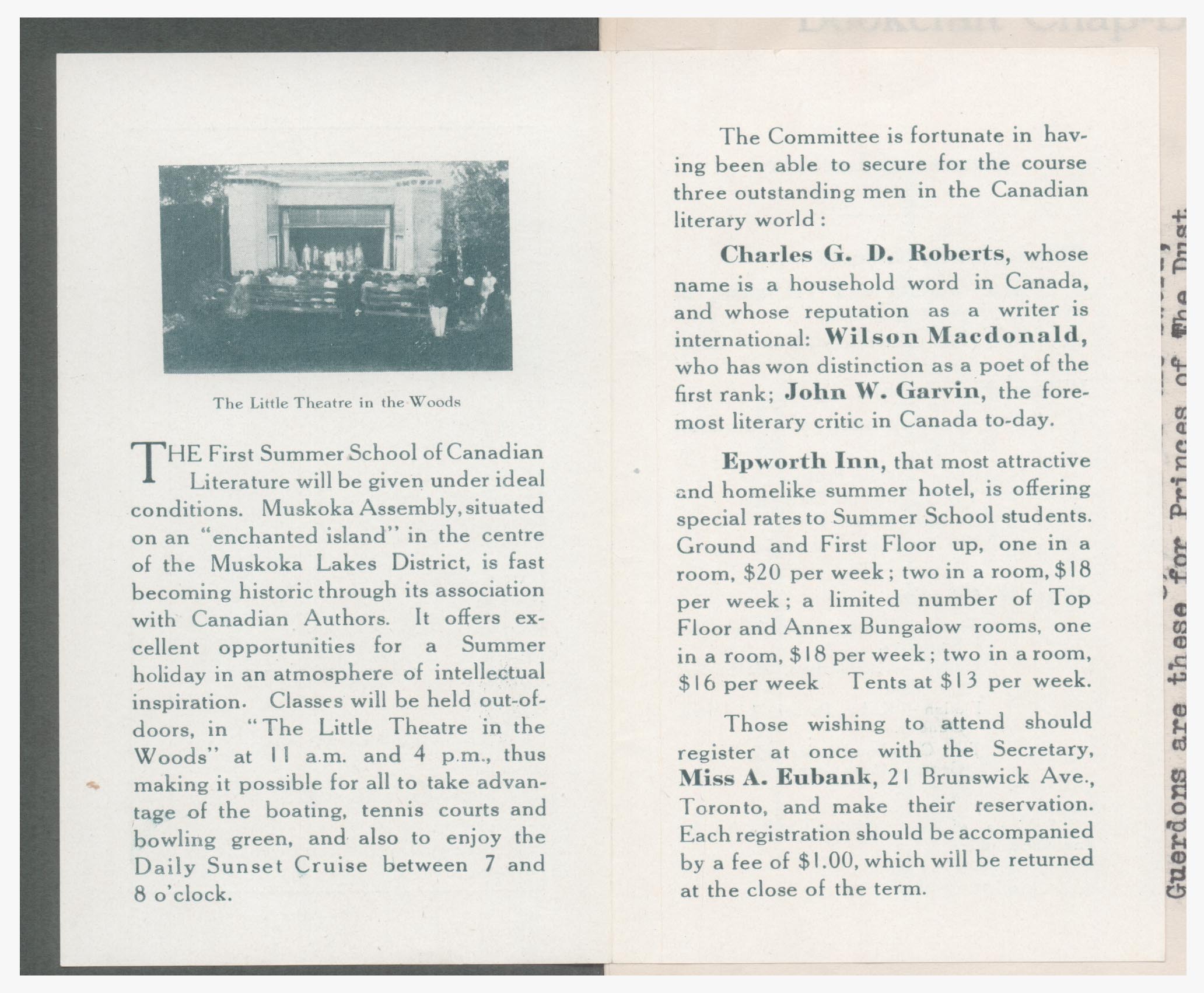 Poems (1936), Canada Speaks of Britain (1941), and Flying Colours (1942). There are also photographs, frontispieces, clippings, musical scores for Roberts’s poems, drafts for speeches, and such memorabilia as a pamphlet on “the first summer school of Canadian literature,” held in 1925 in Muskoka, where Roberts joined Wilson Macdonald and J.W. Garvin as speakers.