The Prospectus of the Quebec Gazette/La Gazette de Québec

One of Canada’s most important early newspapers, launched by its first publishing dynasty, the bilingual Quebec Gazette/La Gazette de Québec announced its impending establishment with a prospectus dated 1763, in which citizens of Quebec City were promised a publication that would become a “benefit” to their community. Preserved in the collections of the Thomas Fisher Rare Book Library at University of Toronto, the prospectus and the newspaper are valued today as one of the treasures of Canadian cultural history.

"As every considerate Mind is solicitous to know the State of the World about him, and the Circumstances of the several Nations, joint Inhabitants of the Universe with him, so it must be an additional Satisfaction to be acquainted from Time to Time with the Events and important Transactions in the different Quarters of the Globe: ... This Principle can only be gratified in its most extensive Latitude by Means of the Press ..."

Proclaiming that “a well regulated Printing Office has always been considered as a publick Benefit,” this notice, printed in Philadelphia in 1763 by William Brown (ca. 1737-89) and Thomas Gilmore (1741-73), served notice that a press, the first press in the colony of Quebec, (and the second in Canada), would shortly be established in Quebec City. The printers hoped, early in the spring, to settle in the city in “the Capacity of Printers,” and to publish a weekly newspaper. Their aim was broad-ranging: not only to provide the news of the world, but also general entertainment, publishing original material in prose and in verse. The paper was to be printed in both French and English, thus serving as a “Weekly Lesson for Improvement, to every Inhabitant willing to attain to a thorough Knowledge in the Language of the Place, different from that of his Mother Tongue, whether French or English.” 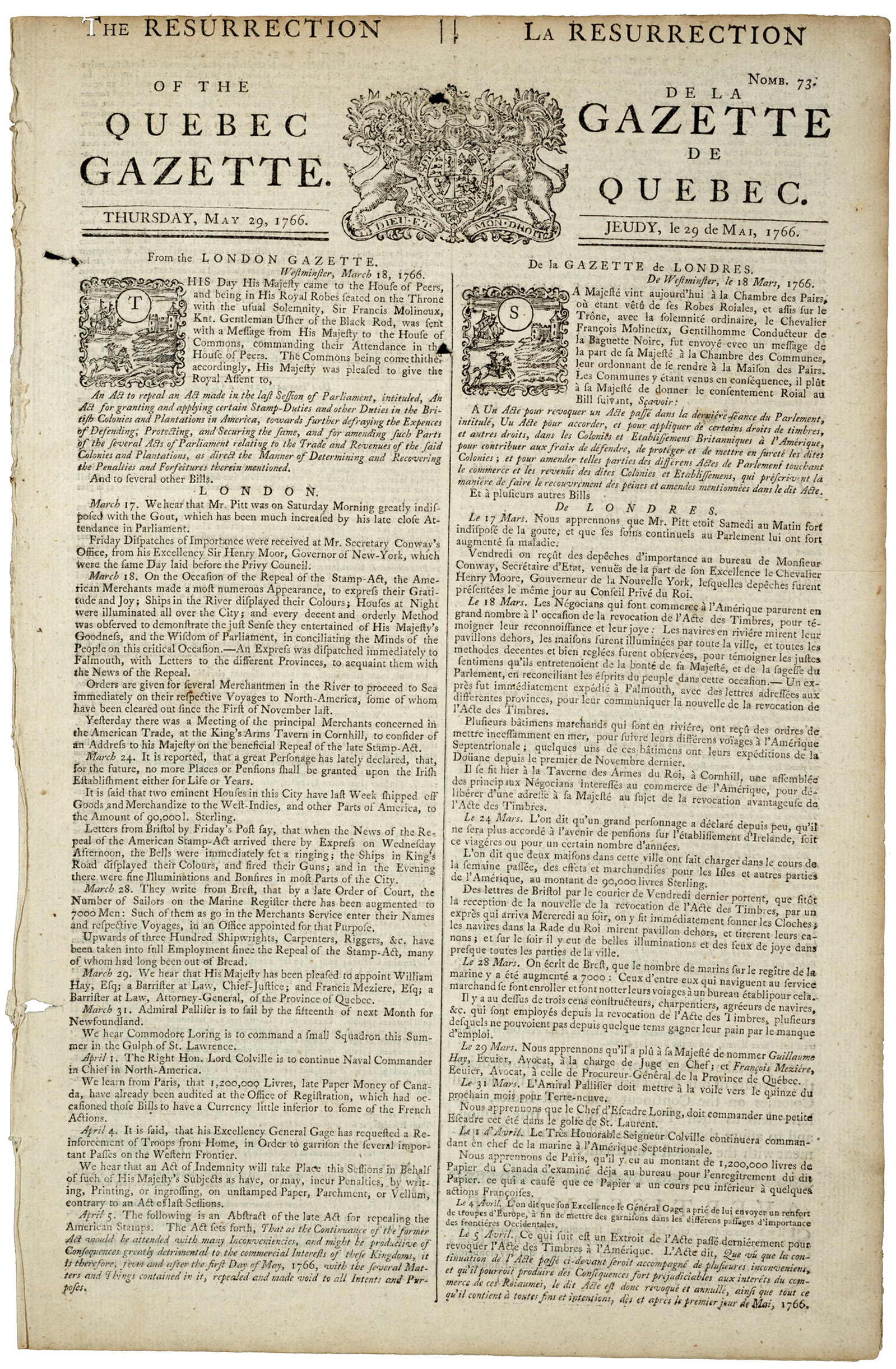 William Brown was born in Scotland and at an early age was sent to stay with family relatives in Virginia, where he studied mathematics and classics at William and Mary College. In 1758 he began working for William Dunlop, a Philadelphia printer and bookseller. Dunlop eventually put him in charge of two bookshops, and then sent him to Barbados to manage a printing shop. A dislike of the climate led to his return to Philadelphia and friendship with Thomas Gilmore, another employee of Dunlop. Little is known of Gilmore’s origins. Born either in Philadelphia or Dublin, he had been hired at the age of 17 to work in the shop. Interested in expanding his opportunities, Brown wrote to Governor James Murray of Quebec, asking for authorisation to found a newspaper in the new British colony and for moral and financial support. Murray’s response is unknown, but a partnership agreement between Brown and Gilmore was signed on 5 August 1763, with each partner, aided by Dunlop, putting in £72.

Brown travelled from Philadelphia and arrived in the town toward the end of September 1763. Gilmore, in the meantime, went to England to purchase printing equipment, arriving in Quebec on 7 June 1764, with a press and new printing types purchased from the firm of William Caslon. 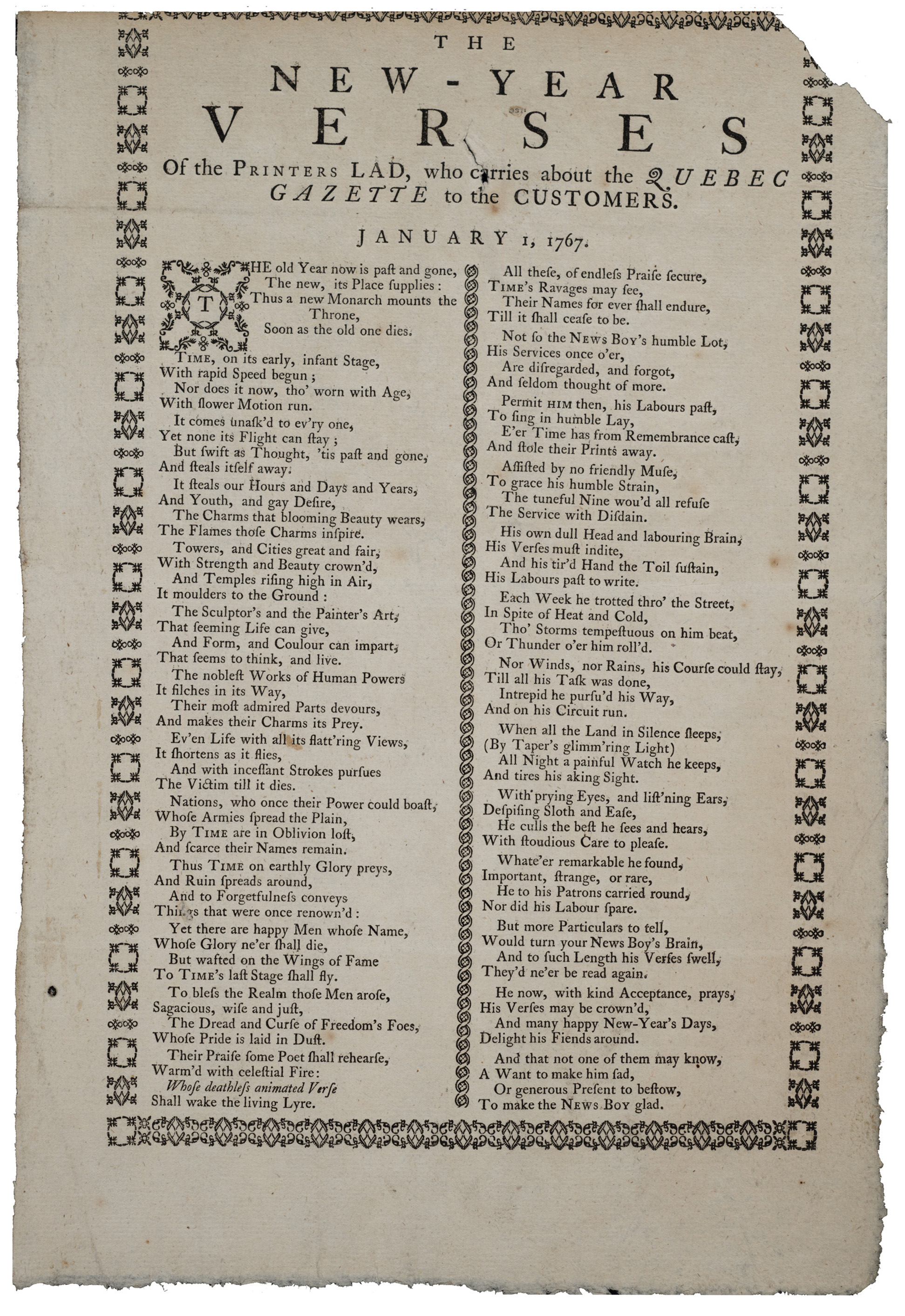 The prospectus had been circulated in the colony (an account for pasting the notice was entered into the printers’ account books on 31 December 1764). Although they had hoped for three hundred subscriptions in order to set up “a genteel Printing-Office,” the accounts show that 143 men had subscribed when the first number of the Quebec Gazette/La Gazette de Québec was printed on 21 June 1764. The newspaper, usually four pages long in two columns, was printed in English and French and appeared weekly on Thursdays, except for a brief period in 1766-67 when it was published on Mondays. An increase in sheet size enlarged the text to three to four columns and the newspaper itself was often accompanied by supplements of from one to ten pages; these supplements were, according to Canadian bibliographer Marie Tremaine, a feature “peculiar to the Quebec Gazette.” The subscription cost was $3.00 per year, increasing to $4.00 after May 1800. 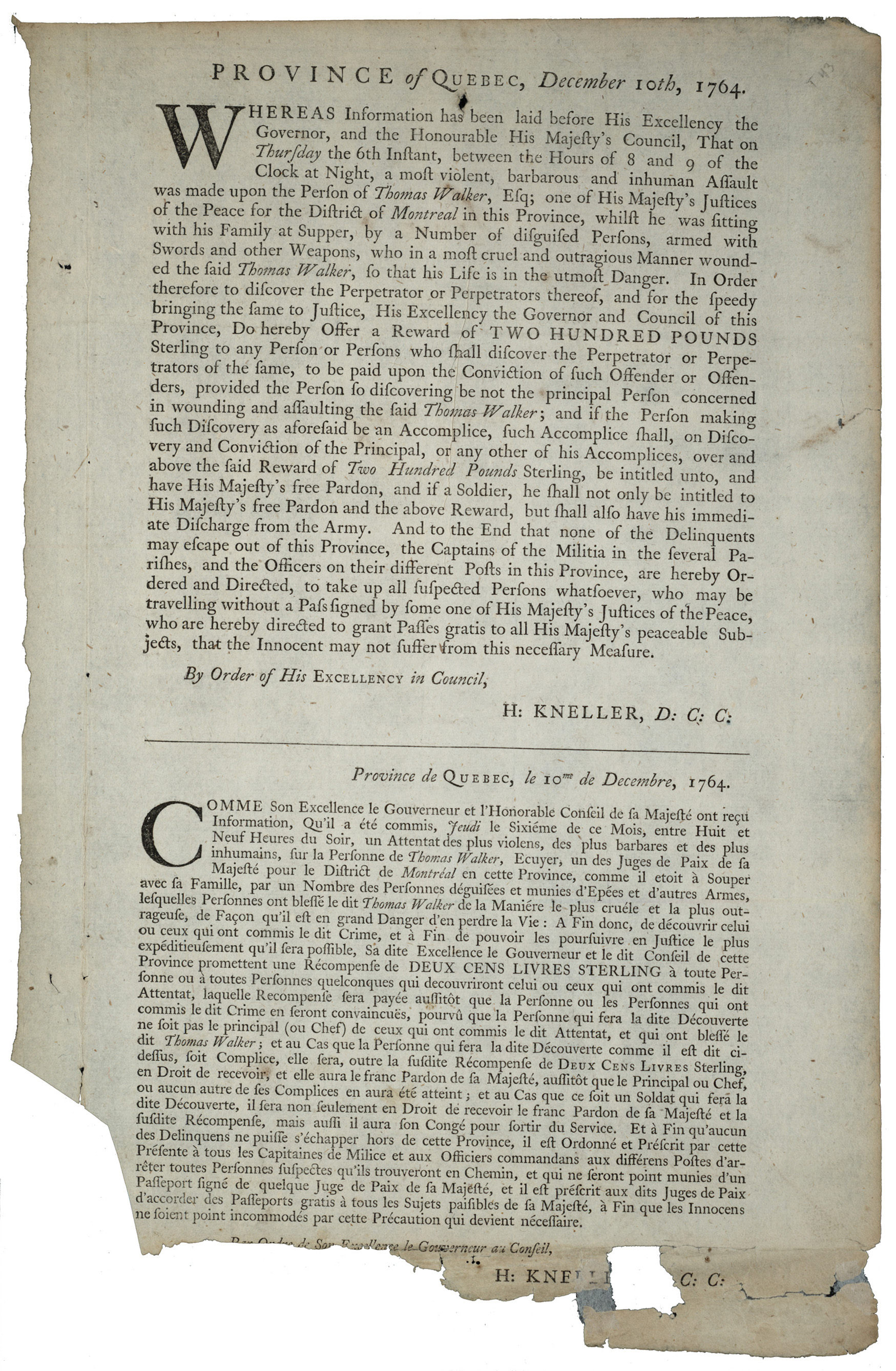 The firm proved successful; the subscription base, the £50 paid annually by the government for official announcements and the monies raised by job printing allowed the printers to buy a new press in 1767 and to pay back William Dunlop in 1768. In that year they wrote to Dunlop asking for help in finding an apprentice and a translator.

Brown and Gilmore’s wish to publish a bilingual newspaper caused difficulties from the beginning as the firm had to hire a translator. As early as July 1764, the Gazette advertised in English, and very poor French, for “an Apprentice to the Printing Business, an ingenious Boy, about 14 Years old, who

can be well recommended; if he can read, write, and should be able to make himself understood in both French and English, he will be the more acceptable.”

Gilmore died an alcoholic, early in 1773 at the age of 32. The Gazette issued on 27 January 1774 announced the dissolution of the partnership and sole proprietorship of the newspaper by William Brown. Brown continued the business successfully on his own, printing the Gazette until three days before his own death on 22 March 1789. The firm passed into the hands of his nephews: first, to Samuel Neilson (1771-93) who greatly expanded its operations until his tragically early death; and then to John Neilson (1776-1848). The newspaper continued until 1873 when it merged with the Morning Chronicle to become the Quebec Chronicle and Quebec Gazette.

The prospectus originally was inserted into one of four volumes of the Quebec Gazette, an almost complete run from 21 June 1764 to 31 December 1772, donated to the Thomas Fisher Rare Book Library by Louis Melzack.