While many Canadian periodicals are short-lived, Queen’s Quarterly has endured to become the oldest academic quarterly in Canada. It has built its success on the writings of its Canadian contributors. This study explores the Quarterly’s relationship with authors and the journal’s influence on Canada’s cultural development.

Queen’s Quarterly was founded by George Munro Grant, Sir Sanford Fleming, John Watson, and others in 1893. It is the oldest scholarly quarterly in Canada, pre-dating the inception of both the University Magazine (1900, McGill University), the Dalhousie Review (1920) and the University of Toronto Quarterly (1931). The original intent of the editors was to produce a journal with which all Canadian universities, or at least the theological colleges, were affiliated. This ambitious ideal was abandoned because of complex logistics, and the journal became primarily dedicated to alumni news written by Queen’s graduates living in Great Britain. The Quarterly received much criticism for this parochial approach. B.K. Sandwell, then editor of Saturday Night, blamed Grant for this shortcoming, and suggested that the Quarterly “was just another expression of Principal Grant, one facet of a kaleidoscope” and 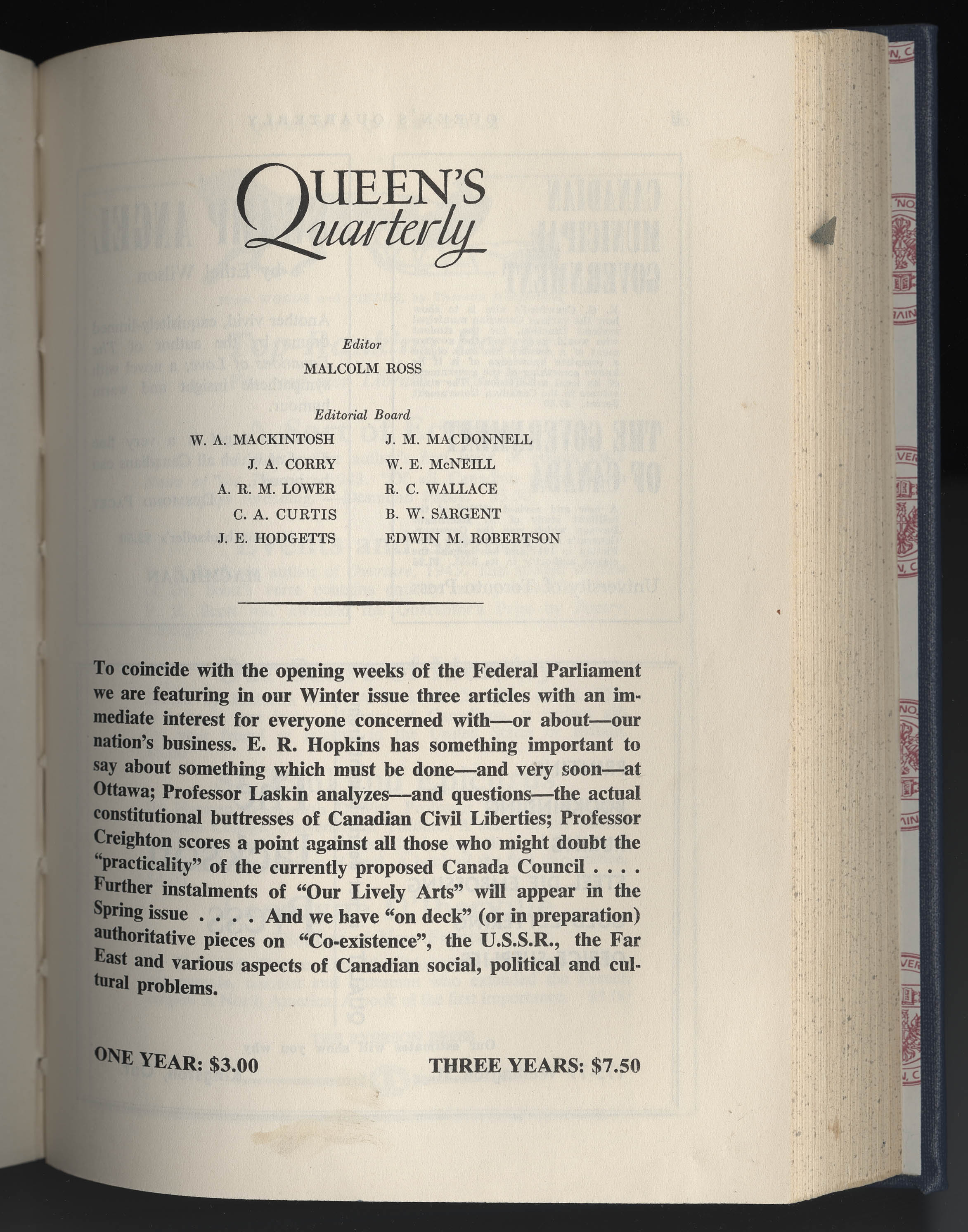 that “Grant, without admitting it, took all knowledge for his province.” The unyielding control that Grant had as editor-in-chief was considered so problematic that after his death in 1902 the Quarterly was re-organized to avoid a recurrence of this situation. An attempt was made to decentralize control by appointing a business manager to facilitate operations, while an editorial board reviewed contributions. However, this did not address the issue of the Quarterly’s narrow appeal. In an article celebrating the Quarterly’s fiftieth jubilee, D.D. Calvin suggested that “there was a feeling among the senior men at Queen’s that the Quarterly of the 1920s was not a success, and that it had little influence.” 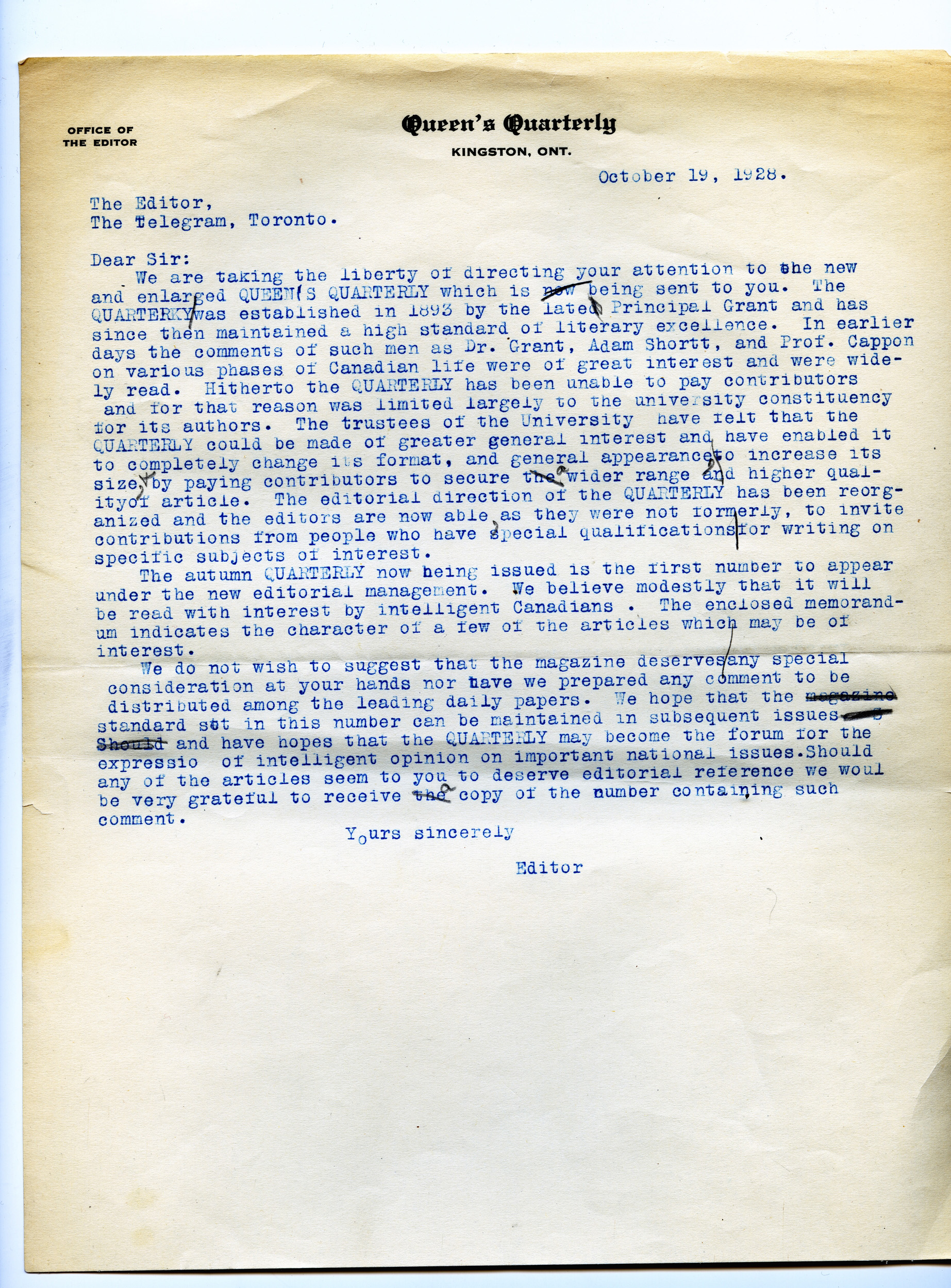 This sentiment inspired the Board of Trustees to establish a committee to address these problems. In 1928 the Board implemented a number of the committee’s recommendations. Decentralization of power at the managerial level had led to an absence of cohesion, so the position of editor-in-chief was re-instated to re-establish continuity. The Quarterly also underwent aesthetic modernization, with a new cover and font type. More significantly, the Board made the decision to begin paying contributors in the hopes that the quality of contributions would improve. Finally, the Quarterly was given the subtitle “A Canadian Review,” which underscored the journal’s new effort to appeal to a broader Canadian audience, and extend its influence beyond the Queen’s community.

The Quarterly’s new editor, Duncan McArthur, envisioned that expanding the journal’s commitment to literature would provide this connection. 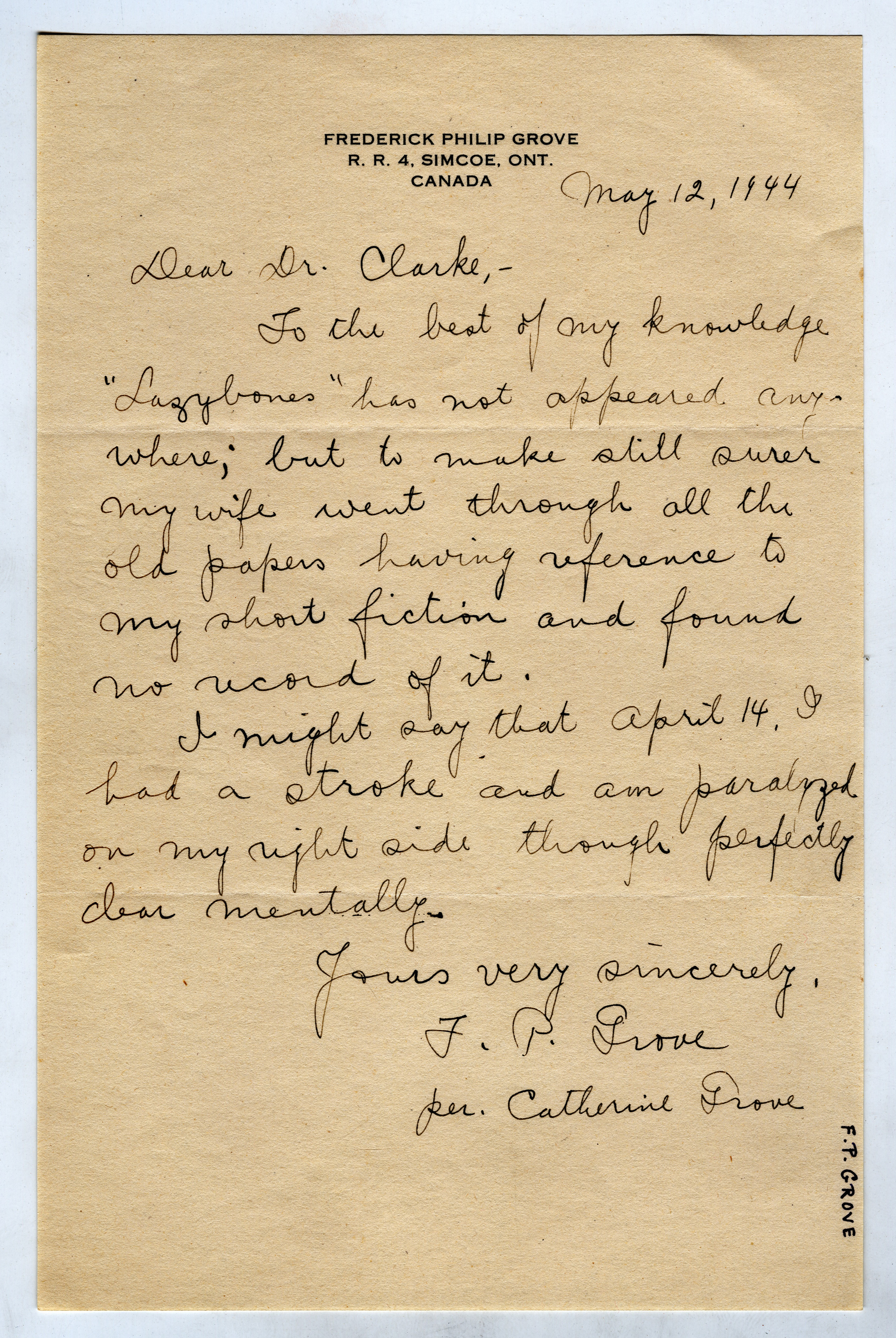 The journal featured its first piece of fiction in 1932, a sketch entitled “Snow,” by Frederick Philip Grove, who went on to publish two short stories in the Quarterly: “The Desert” (1941) and “Lazybones” (1944). By publishing Grove’s distinctly prairie fiction, the Quarterly revealed it was friendly to writers from west of Ontario, which proved to be a fortunate opportunity for Sinclair Ross. Ross published his first short story, “Field of Wheat,” in the Quarterly in 1935, and debuted an additional eleven stories in the journal. Not only do these twelve stories comprise the majority of Ross’s acclaimed collection Lamp at Noon and Other Stories, but their success inspired him to write the novel As for Me and My House, which solidified his position as an influential Canadian author. A symbiotic relationship of success was thus established between the Quarterly and emerging authors. The Quarterly has subsequently published prominent Canadian writers 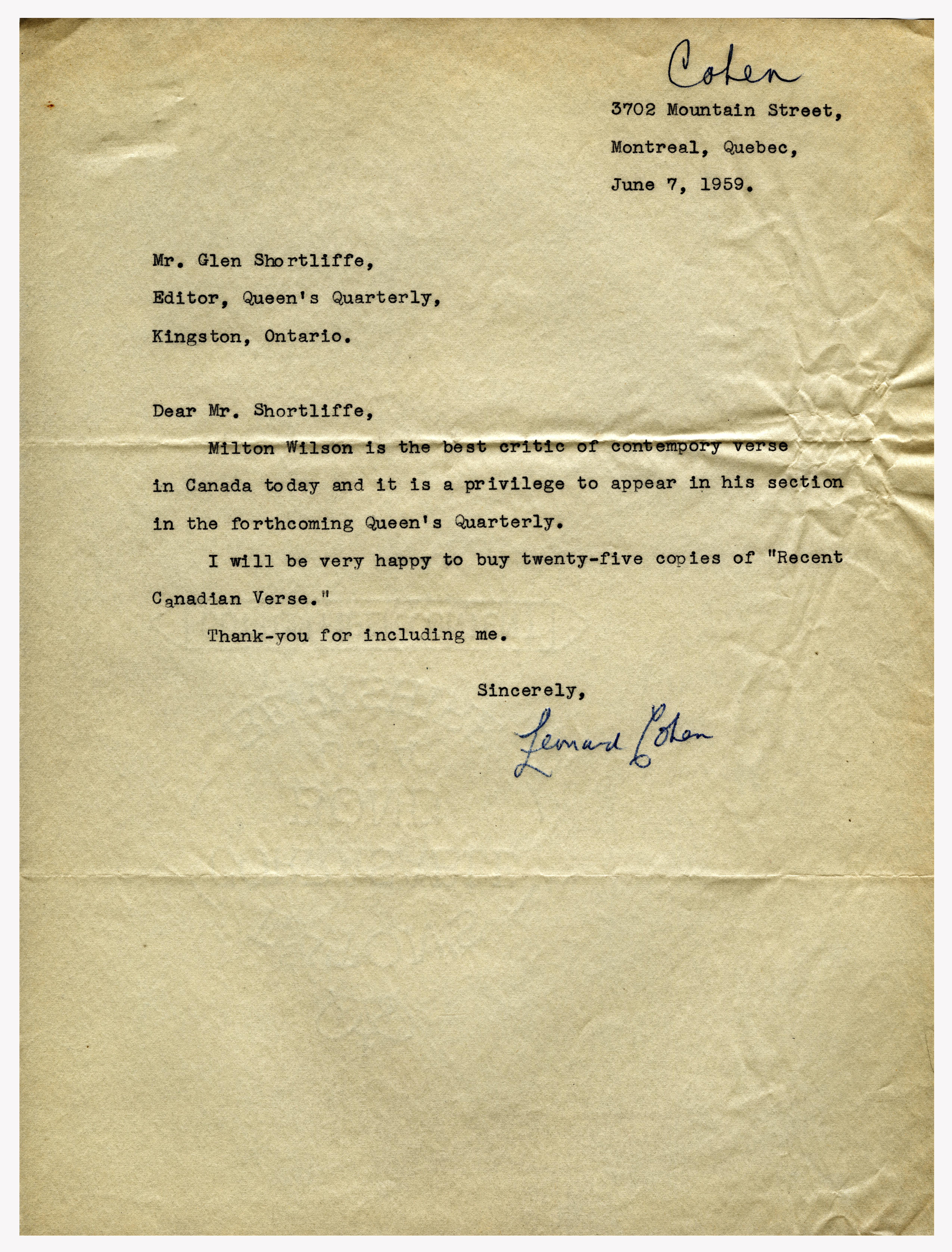 Expanding the Quarterly’s national appeal was a path followed by later editors including Malcolm Ross, who attempted to further widen the geographical breadth of readership, and Glen Shortliffe, who showcased Canadian poets after noting a lack of stimulating poetry in the Quarterly. To reinvigorate the journal’s poetical content he commissioned Milton Wilson, one of Canada’s foremost poetry scholars, to compile a collection of Canadian works. In 1959 the selection was published with an unprecedented amount of space dedicated to poetry, 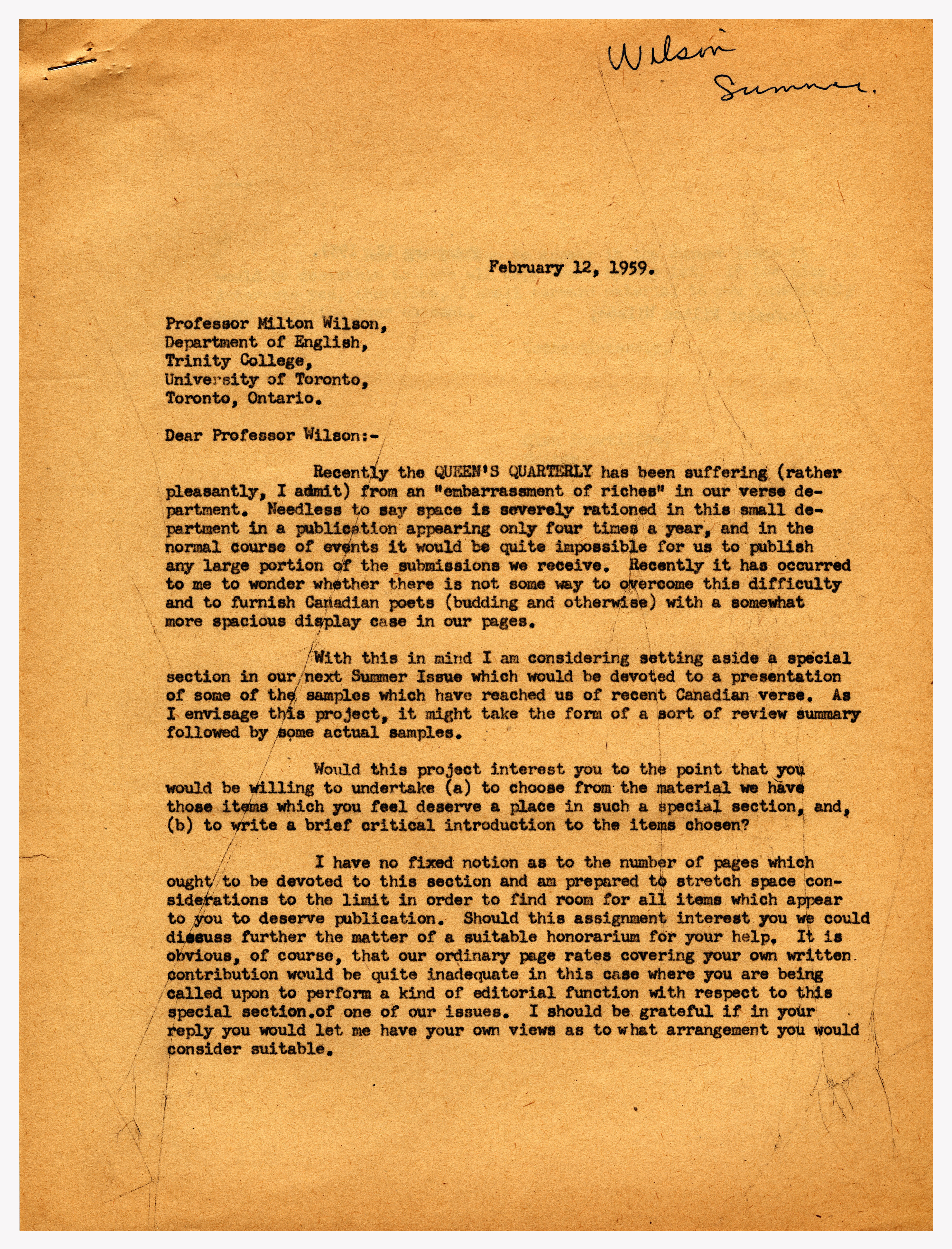 with thirty-four poems written by both emerging poets, like Alden Nowlan, and more established writers including Irving Layton. Some of Leonard Cohen’s early poetry was also featured in this collection.

By 1980 the Quarterly finally appeared to live up to its sub-title, “A Canadian Review.” Editor Kerry McSweeney asserted that the Quarterly was indeed dedicated to its Canadian contributors and readership and that it achieved a “national frame of reference.” However, she suggested that the struggle to maintain this national scope still persisted and that each editor had to expend effort to maintain the journal’s status as a pan-Canadian academic publication.

Under the direction of its current editor, Boris Castel, who began his tenure in 1990, and with a re-design of the publication the next year, Queen’s Quarterly continues as one of Canada’s leading scholarly journals. In addition to providing exemplary literary works, a survey of its contents since 1991 reveals a wide range of topics and contributors. Commentators on various aspects of society have included Mel Watkins, Robert Fulford, Michael Ignatieff, Jeffrey Simpson, John C. Polyani, Bob Rae, George Grant, Janet 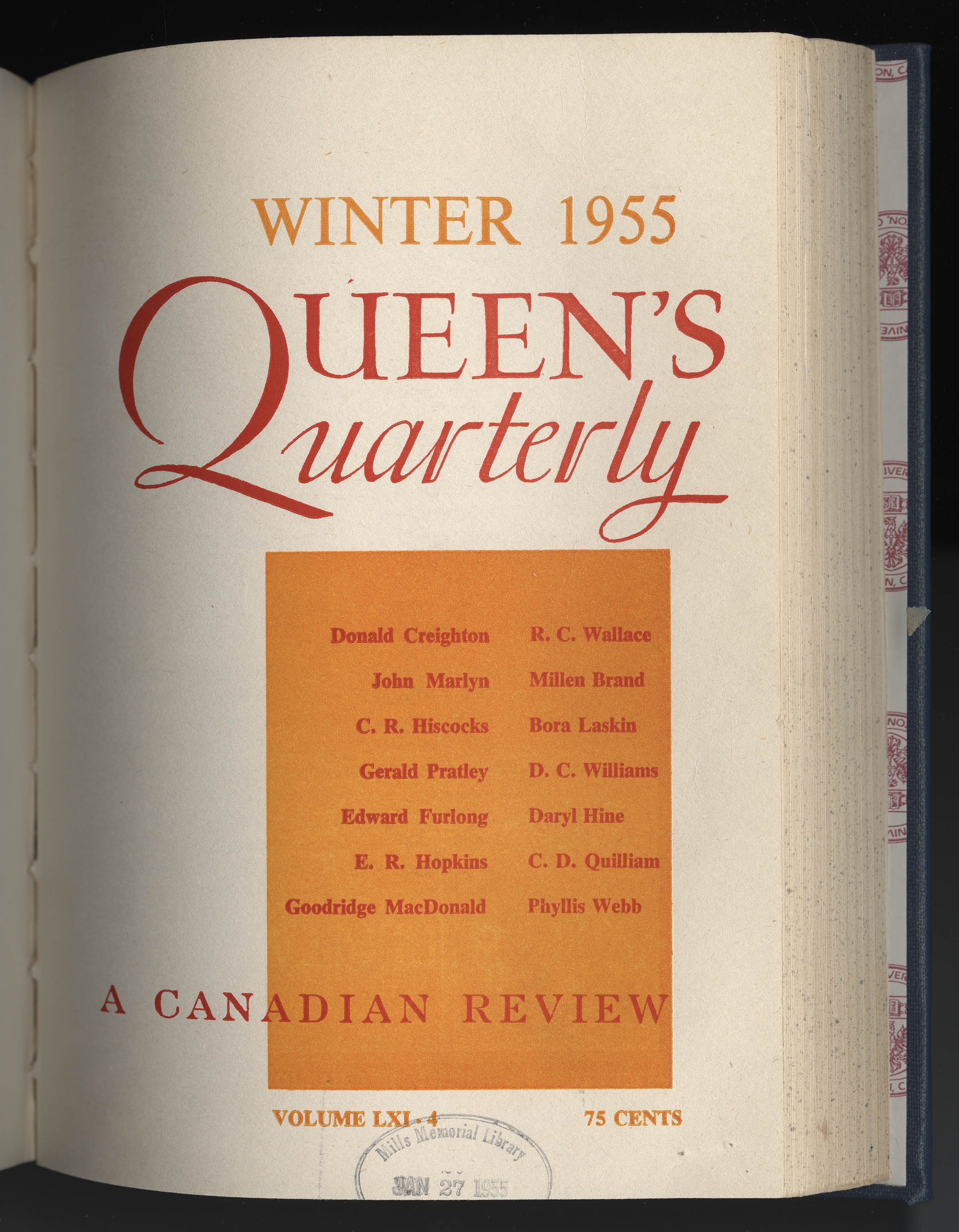 Gross Stein, and George Woodcock. Among the topics covered are free trade, nationalism, the future of Canada, scientists as citizens, social justice and economic reality, the use of freedom, memory, anarchism and language, and lying.

Celebrating Queen’s Quarterly’s ninetieth anniversary in 1983, editor Michael Fox stated that the journal had been a “contributor to the formation of Canadian cultural ... identity,” and that its persistence in publishing Canadian authors played a significant role in that development, a role in which it certainly continues.