Stephen Leacock and His Canadian Publishers

Like many Canadian writers in the first half of the twentieth century, Stephen Leacock sought publication outside of Canada in order to establish himself as a bestselling author. This case study explores why an author of Leacock’s stature regarded Canadian publishers in a subsidiary role.

Stephen Leacock (1869-1944) — humorist, professor, social critic, historian, biographer, and platform entertainer — was a prolific author. At the height of his fame he sold his comic sketches to popular magazines on both sides of the Atlantic, and then he gathered them together for an annual anthology. It was a lucrative way of writing, getting paid for serial rights and publication in North America and England and having a book with almost the same stories packaged together for the reading public. After the vanity publication of his first 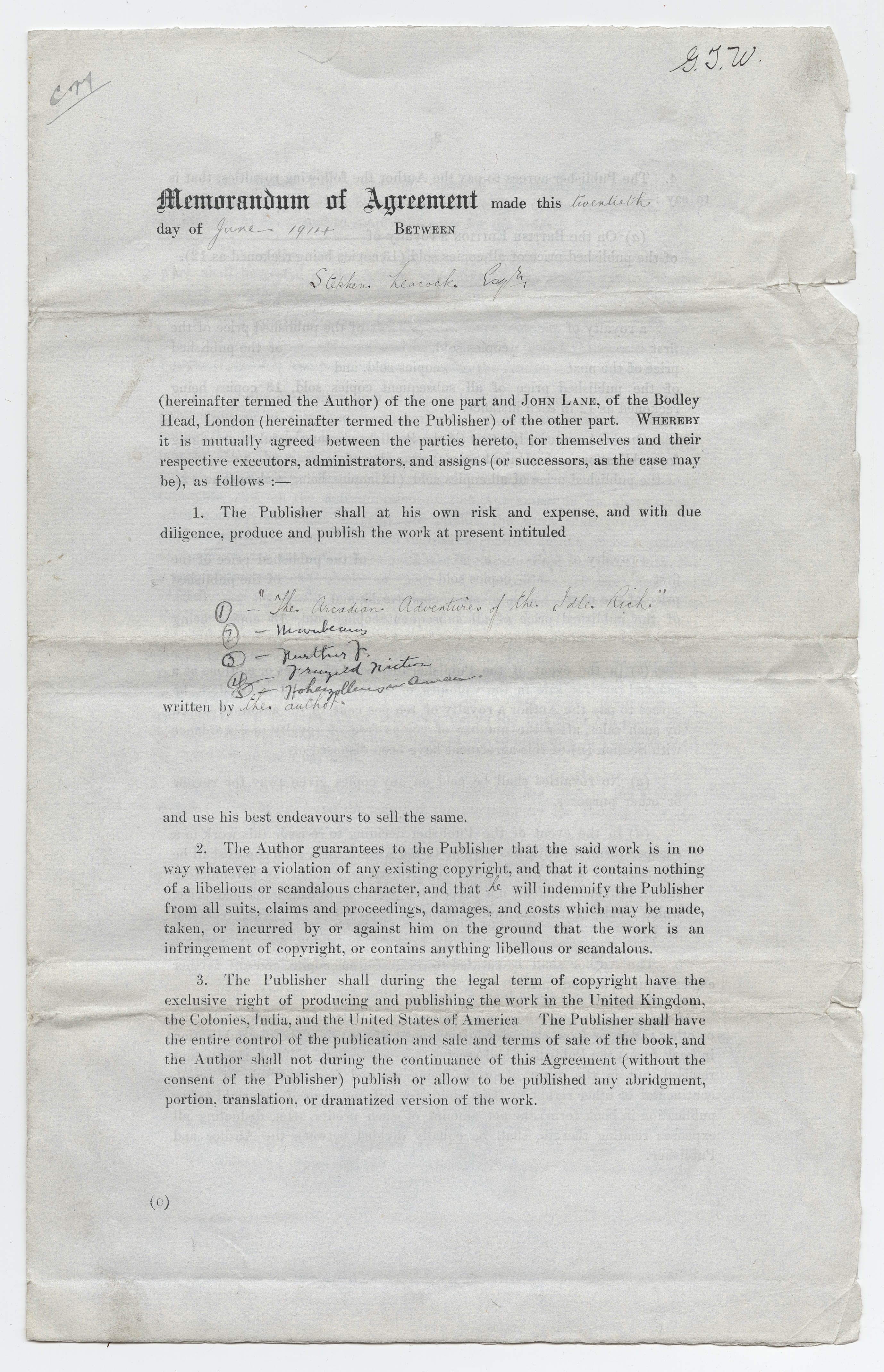 book of humour, Literary Lapses (1910), Leacock was soon contacted by John Lane, the English publisher, who was eager to publish Leacock’s stories for a wider audience. In the United States the John Lane Company (the American branch of the publishing firm) assumed a similar role as Leacock’s publisher up to the end of 1921; Lane sold the American branch to Dodd, Mead and Company at the beginning of 1922. Under the terms of this purchase, Dodd, Mead took control of the American contracts of the John Lane Company. Impressed by Frank Dodd’s enthusiasm and by the republication of his earlier books under the Dodd, Mead imprint, Leacock may have been wary at first of a contractual commitment for future books, but he was soon convinced that his long-term interests were best served with a devoted American publisher and an equally enthusiastic American public. Although several of Leacock’s books appeared in England and the United States under the imprint of other publishers, Leacock remained faithful to these two publishers during his lifetime, especially for his best-selling books of humour. 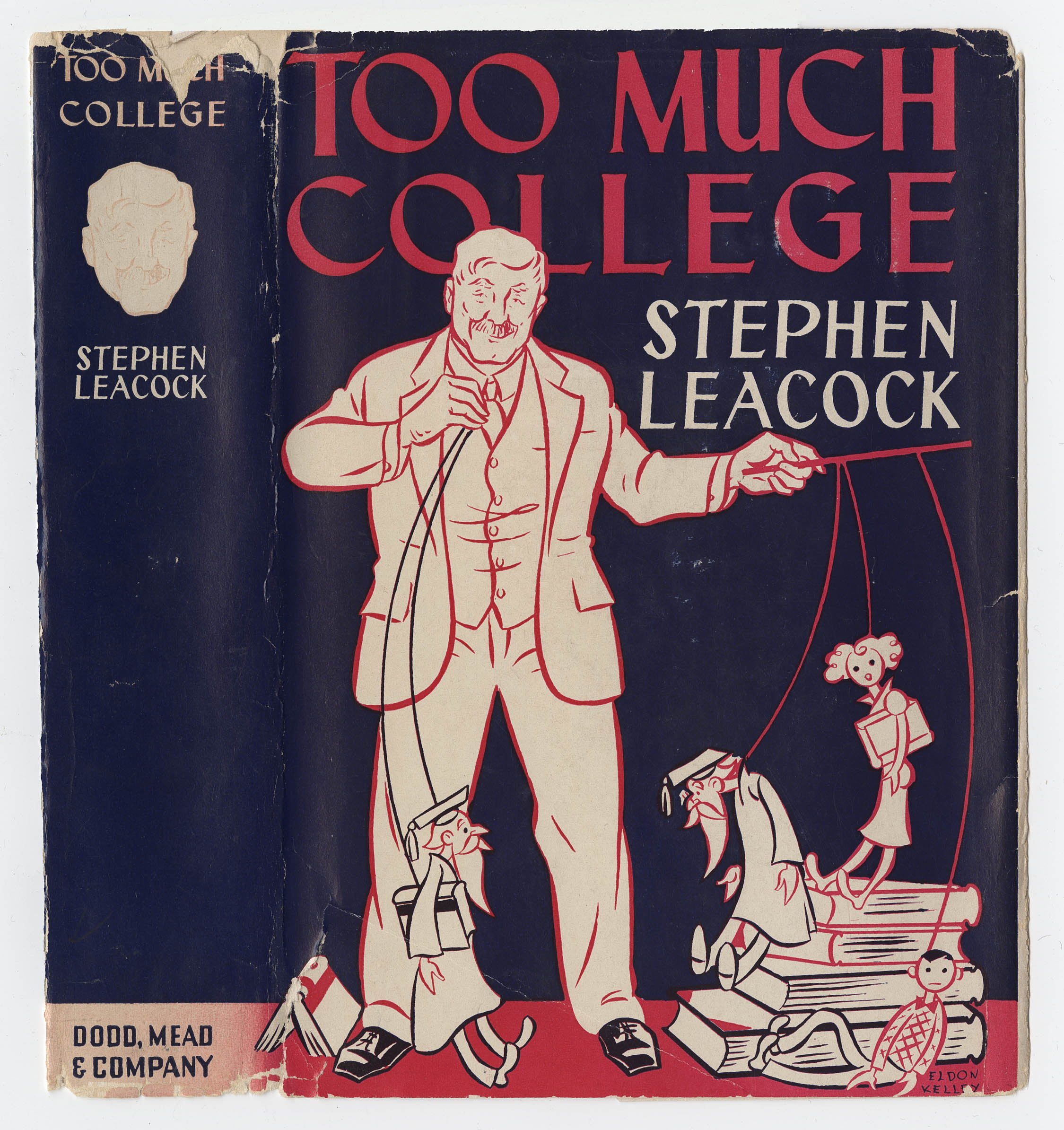 But in Canada, Leacock’s relationship with his publishers was quite a different story. During his career Leacock worked with more than ten Canadian publishers: Morang & Co.; Montreal News Company; Publishers’ Press; Musson Book Company; Bell and Cockburn; S.B. Gundy; Glasgow, Brook and Company; Macmillan of Canada; Thomas Allen; Charles Bush Limited; McClelland & Stewart; and Oxford University Press. Publishers’ Press (the publisher of Nonsense Novels) went bankrupt in April 1911, and Bell and Cockburn (the publisher of Sunshine Sketches of a Little Town, Behind the Beyond, and Arcadian Adventures with the Idle Rich) met a similar fate in December 1914. With regard to Morang and Glasgow, Brook and Company, Leacock was under contract to write books in a series related to Canadian history: The Makers of Canada series and The Chronicles of Canada series, respectively. In the 1930s Leacock also used several Canadian publishers, particularly Macmillan and 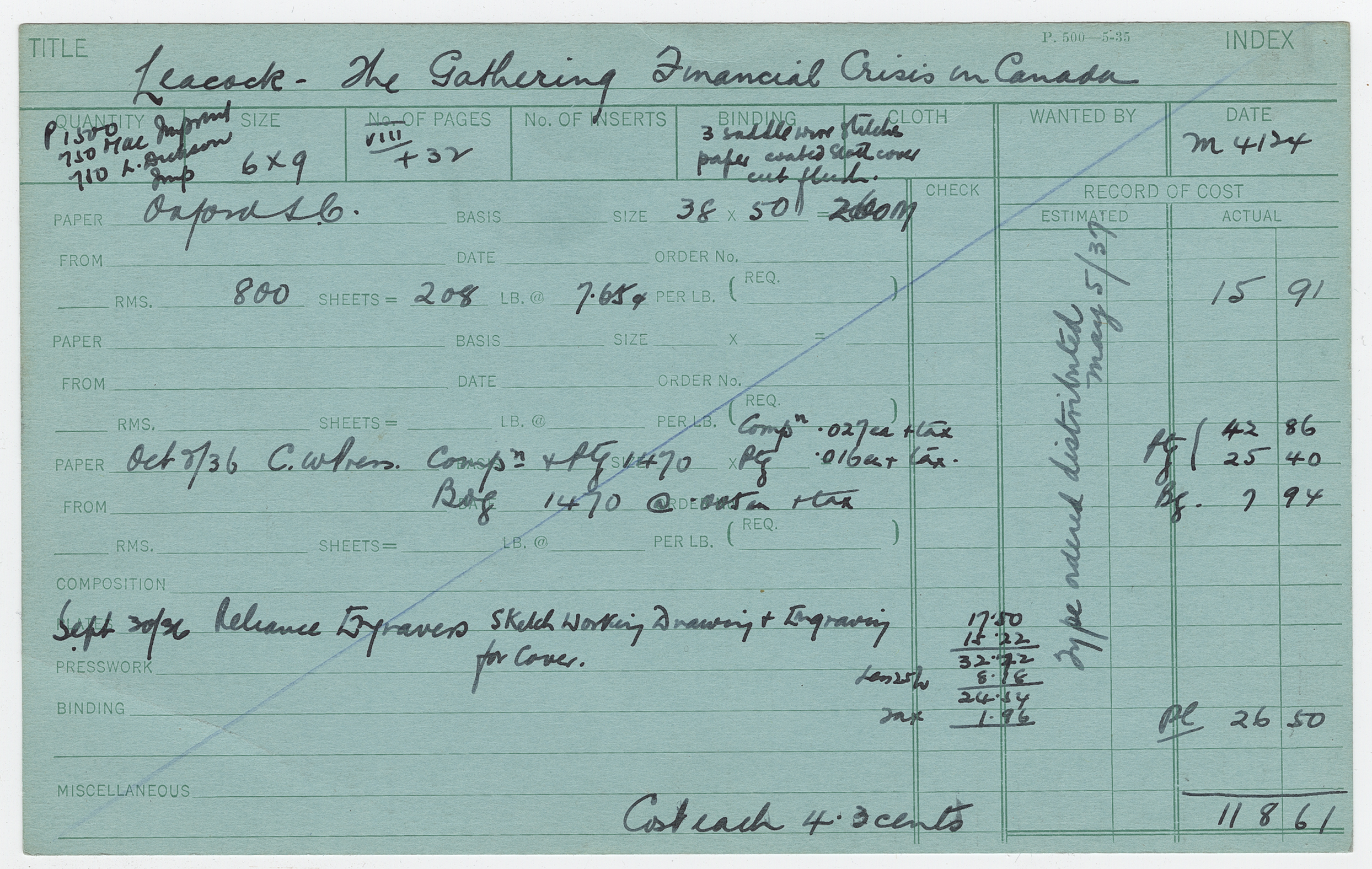 Oxford University Press, for the publication of social and political pamphlets that focused on Canadian economic issues of the day; these pamphlets often had small print runs and a limited appeal, and the publishers tried to gain favour with Leacock in the hope of acquiring the rights to his more popular books. In at least two cases, Leacock developed close personal relationships with Canadian publishers, notably W.C. Bell (Bell and Cockburn, and later associated with Oxford University Press) and Hugh Eayrs of Macmillan of Canada. Eayrs would sometimes travel to Old Brewery Bay, Leacock’s home in Orillia, Ontario, where publisher and author would go fishing together on Lake Couchiching. 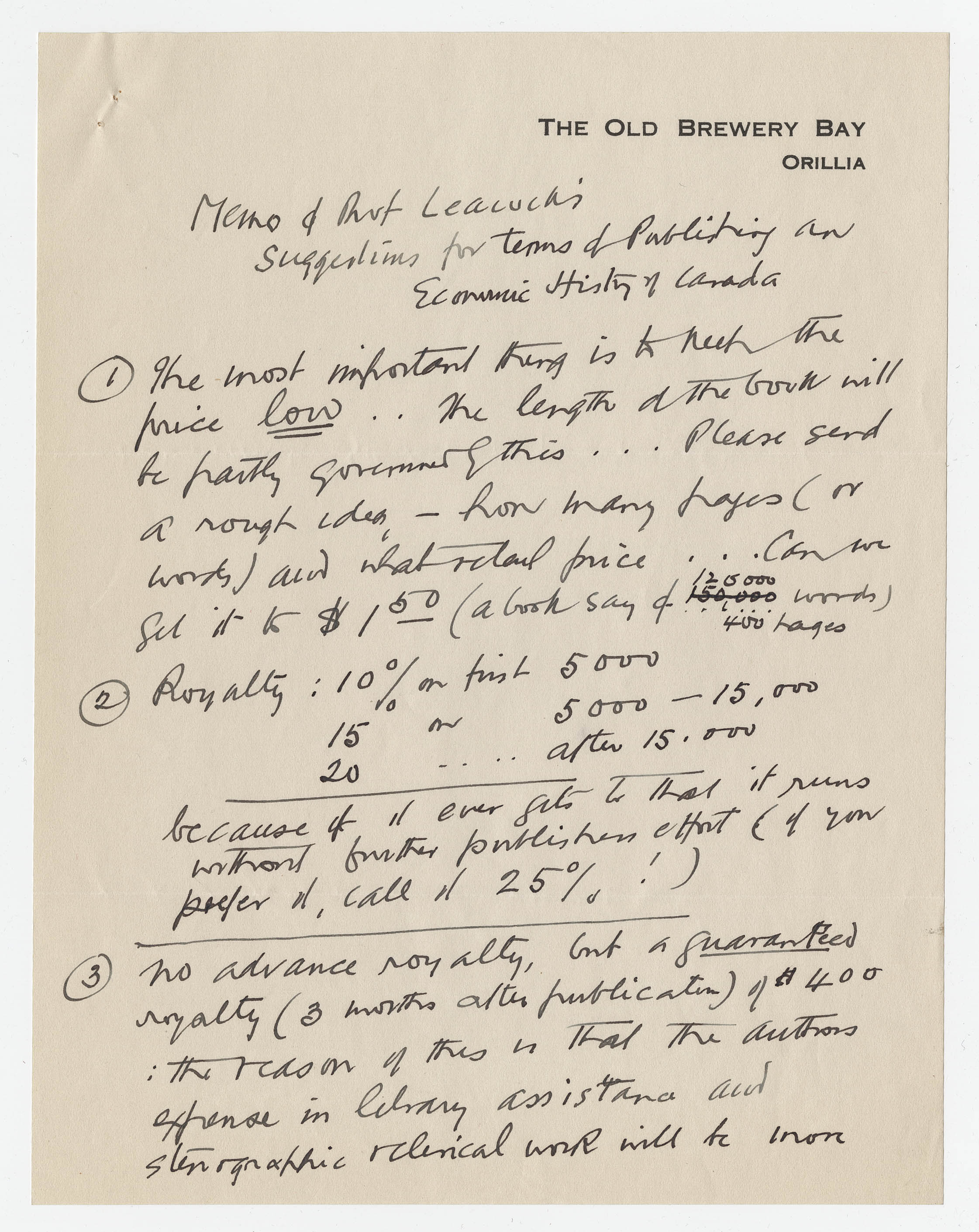 There are several reasons why Leacock treated his Canadian publishers differently than his American and English counterparts. To begin with, the Canadian market was relatively small — less than 5,000 copies in sales. When he bundled up the manuscripts of his stories, Leacock sent them to his publishers in London and New York, not Toronto. His American and English publishers ordinarily controlled the rights in the English-speaking world. A Canadian publisher acted either as a branch plant of a larger publishing enterprise or would arrange for the agency of an author’s books. Once this connection was established, it would have been very difficult for another Canadian publisher to obtain the rights for publication in Canada. Leacock read his contracts quite closely, and occasionally, he retained the Canadian rights to his books. The only separate Canadian edition of one of his books of humour prior to 1930 is College Days, published by S.B. Gundy in 1923. Bibliographically speaking, all other Canadian publications of Leacock’s books of humour are issues — that is to say, in terms of printing and production, they derive from American or English editions.

In February 1926 Leacock severed his connection with S.B. Gundy and advised his American and English publishers that the Macmillan Company of Canada would be publishing Winnowed Wisdom and his next two books of humour. Hugh Eayrs nurtured his relationship with Leacock, publishing theses of Leacock’s graduate students in political economy at McGill University, for example. But matters came to a head in 1931-2. Although Macmillan of Canada published Afternoons in Utopia and a series of Leacock’s pamphlets in the 1930s, McClelland & Stewart (the Canadian agent of Dodd, Mead) obtained the Canadian rights to Leacock’s previously published books of humour. In essence, notwithstanding Eayrs’s friendship with Leacock, Macmillan ceased to be Leacock’s Canadian publisher because McClelland & Stewart had aligned itself with Dodd, Mead.

In his ground-breaking study, Authors and Audiences: Popular Canadian Fiction in the Early Twentieth Century, the historian Clarence Karr charts the careers on the international stage of five popular authors of Canadian 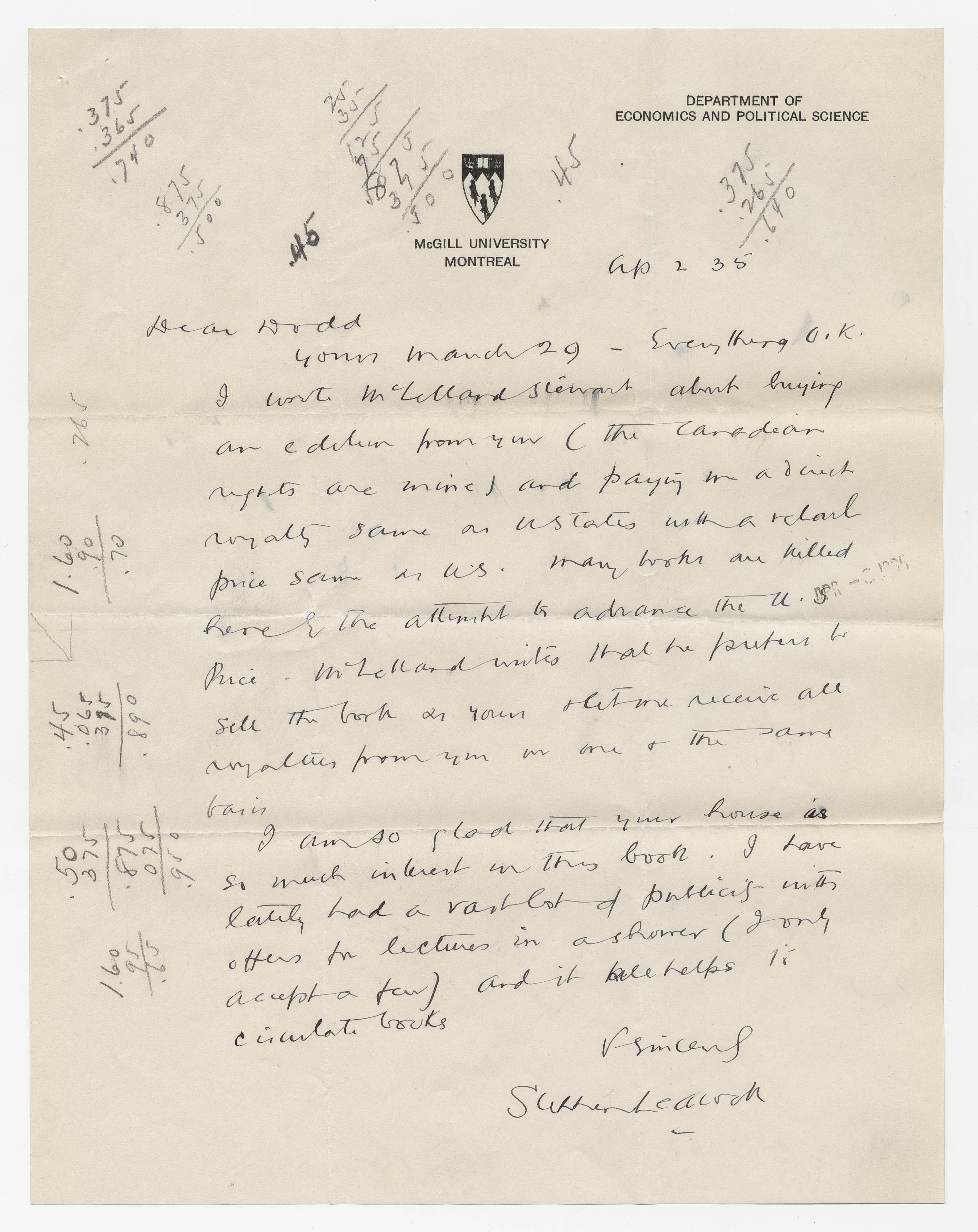 fiction — Ralph Connor, Robert Stead, Nellie McClung, L.M. Montgomery, and Arthur Stringer. The period of Karr’s study is the 1890s through to the 1920s, what he refers to as the “golden age” of writing when hard-cover fiction flourished in the English-speaking world. A general theme of Karr’s book is that each of these five authors struggled with Canadian identity, but ultimately, each author understood that international success — the status of becoming a best-selling author — inevitably depends on strong links with foreign publishers. To a great extent Stephen Leacock conforms to Karr’s model of the Canadian author who reaches out to foreign publishers in order to achieve international recognition.