The warplane, barbed wire, the submarine, the tank, the machine gun and poison gas first saw battle implementation during the 1914-1918 war, and yet it is evident that many of the elements of nineteenth century wars continued to play a significant part in this twentieth century conflict. 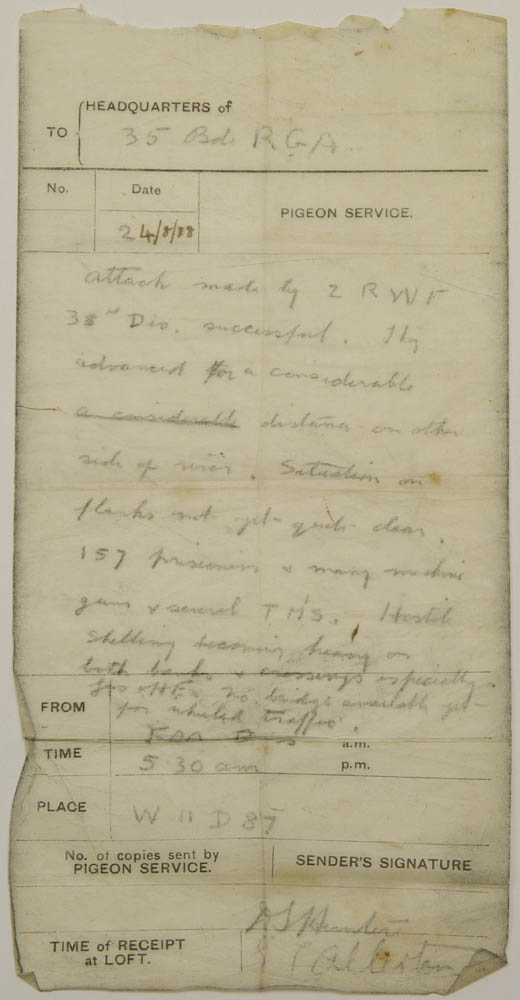 Included in the McMaster's collections is a Pigeon Service Message. Homing pigeons have been used to carry messages since ancient times and although wireless telegraphy had already been developed and was refined by Thomas Edison and others in the 1880s and 1890s, and their work with radio waves won the 1909 Nobel Prize for Braun and Marconi, pigeons rather than telegraphy were still often the technology of choice in the trenches. This message was written in a very small hand on a single small sheet of tissue-like paper on 24 August 1918. It informs Headquarters, RGA (Royal Garrison Artillery), of a successful attack by the Second Battalion, Royal Welsh Fusiliers. With the aid of our Trench Map collection we have been able to identify the precise location from which the message was sent, near the town of Aveluy in Northern France. The area was captured during the German advance in the spring of 1918. By 5 April most of Aveluy Wood was in German hands, despite a stubborn defence by the 12th (Eastern), 47th (London) and 63rd (Royal Naval) Divisions. There were several unsuccessful efforts to recapture the wood by various divisions before it was finally cleared of German forces at the end of August. A letter from World War I pilot Dabney Horton makes it clear that the Germans – and their spies – were also using pigeons; in this case the “spy” pigeon outflew the artillery observation plane and evaded Horton’s attempts to shoot it down. This incident gives some indication of the lack of speed and manouverability of these early aircraft.

Another example of the First World War as a transition point between ancient and new technologies is provided by the simultaneous use of two very different forms of transportation, the horse and the tank. At the outbreak of the war, the cavalry units were still seen as elite and essential components of Europe’s armies, indeed the first battle in which Britain was involved, near Mons in August 1914, involved a cavalry charge. However, trench warfare, along with such developments as barbed wire and the machine gun, were soon to make such charges impossible. While horses continued to be extensively used for pulling artillery and supplies, as well as for transportation, they were soon replaced by the tank as an attack vehicle. The origins of the tank’s design can be found in the steam powered tractors used in the late eighteenth century; in muddy areas they would be fitted with “caterpillar” tracks instead of wheels so that they could cover the difficult terrain more easily. The elements of what were first to be called “landships” were in place by 1899: a design by Frederick Simms integrated an internal combustion engine, a bullet-proof exterior and two revolving machine guns. However, the British army was slow to adopt the new device and it was not until the autumn of 1916 that the first tanks were used in battle. Early designs proved unreliable and difficult to manoeuvre; large scale deployment and military success were not to come until the final year of the war. The most successful and best-known of the tanks was the Mark VII or Liberty tank, an Anglo-American development.

Included in the McMaster World War I collection is a small but important series of notes compiled by Squadron Commander T.G. Hetherington in connection with his contribution to the development of the concept of the tank and with experiments to refine armour plating; the link between tractors and tanks is made particularly clear in the document headed “Rewards in connection with Tanks”. Something of the tank’s dramatic and fearsome appearance is captured in two watercolour images by an artist called Fouet in our collection, both apparently from 1917. There is also a drawing by G.E. Stephens. 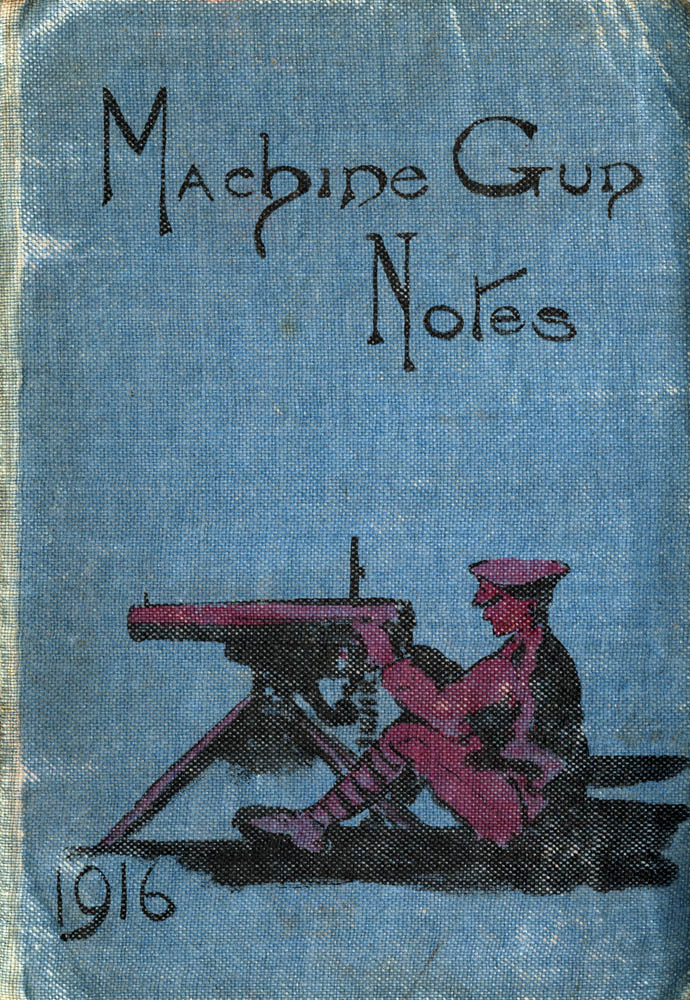 Hiram Maxim’s machine gun, developed in the 1880s, was the first to allow fully mechanized rapid firing of bullets. However, early machine guns were heavy and hence difficult to transport; they quickly overheated and were of questionable accuracy. While the Germans were quick to see the weapon’s potential, the allied armies were slower to adopt and improve the gun; the Vickers, an adaptation of the Maxim model, was the standard British machine gun at the start of the First World War. It was gradually replaced by the lighter Lewis machine gun, a weapon designed in the United States. McMaster’s World War I collection include a meticulously prepared machine gunner’s notebook, compiled at a Machine Gun School in June 1916 by P.D. Willcock of Number 2 Company. As well as a lifelike drawing of a gunner sitting at his machine gun, there are detailed drawings of the gun’s parts as well as detailed comparisons of the Maxim and Vickers guns. The final segment of the notebook contains information and drawings of the newly developed Lewis gun.

Yet another evolving technology, initially employed during the First World War, was poison gas. Chlorine gas was first used by the Germans at the Second Battle of Ypres in April 1915; Britain responded with a gas attack of its own in September of that year. By war’s end phosgene and mustard gas were also being used; both had devastating effects on the recipients, damaging the lungs and other internal organs. Depending on wind conditions, the army employing the gas could be as seriously affected as those for whom the gas was intended. McMaster has a small collection of material collected by Sir John William McNee, a British physician who served with the Royal Army Medical Corps. As well as reports of the Chemical Warfare Medical Committee and the Special Investigation Committee on Surgical Shock and Allied Conditions, the collection contains McNee’s personal notebook, entitled “Gas Cases”. The notes are in pencil and cover the period May to July 1917. An entry for 19 July 1917 records the case of a Canadian Corporal, T.J. Stone. After gas exposure on 18 July, Stone walked three miles to his billet and had a full meal but had respiratory distress soon after. His elevated temperature and pulse are recorded as well as the fact that he was coughing.

'Died later. Delirious during night of 18-19th and throughout day. Also was stone deaf in both ears.”

Such were the human repercussions of advanced technological innovation.