“The Topography of Golgotha”: Mapping the Trenches of the First World War

“…and with maps I make him familiar with the topography of Golgotha.” This line, from a letter written in 1918 by the soldier-poet Wilfred Owen, conjures an ominous picture of the landscape confronting all initiates to the trenches. But it also touches on an aspect of the war that, even today, remains largely unknown and unrecognized.

Maps and their ability to familiarize a soldier with enemy-held terrain, weapon positions, obstacles and trench networks were found to be an integral part of the planning for any successful offensive. In fact, a key factor in the Canadian victory at Vimy and all subsequent battles was that even the lowest ranking soldier had been made familiar with every detail (excluding date and time) of the upcoming attack through the use of maps and mockups. It is indeed arguable that, without the quality and wide range of mapping available to the British and Commonwealth forces in the latter half of the war, none of the innovative tactics created to break the stalemate on the Western Front would have been possible.

At the opening of hostilities the war was expected to be swift and short, and since it was to be fought in familiar countries, already covered by existing maps, the British High Command did not see the need for any further military mapping. Only one officer and one clerk were allocated to Maps General Headquarters in France, with some additional support provided by the printing company of the Royal Engineers. Cartographers and surveyors were permitted to join regular combat units and so were no longer available only months later when the war of movement degenerated into a war of defense and siege tactics. 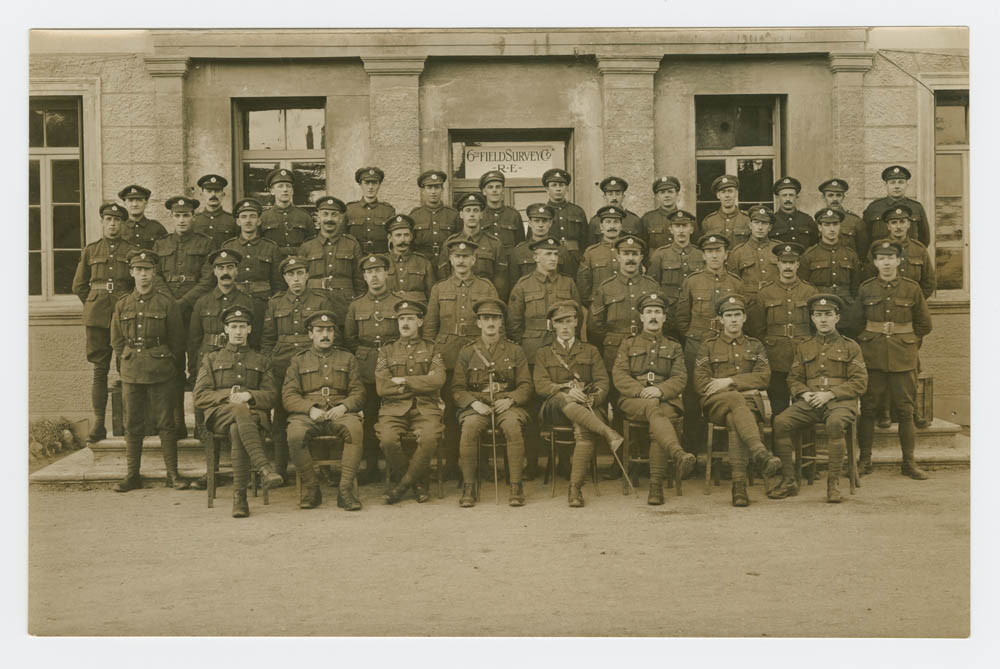 Machine guns kept armies pinned down in defensive trenches while the artillery of all belligerents battled it out. For the first time, artillery began to fire at opposing artillery instead of at infantry. The “big guns” had to be hidden for their own protection behind hills or in wooded areas, resulting in the necessity to fire blindly at the enemy. Accurate range and elevation information was essential. Suddenly, the need for large-scale mapping became apparent.

Existing French maps at 1:80,000 scale produced in the 1880s used hachure marks to indicate changes in elevation which was totally unsuitable for artillery purposes. An attempt was made to overlay contour lines on these maps but the scale was too small to be useful and when enlarged the inaccuracies were only amplified. Some Belgian 1:10,000 scale topographic maps were rescued at the beginning of the war but they used a different projection than British and French maps of the area. When attempting to map a spherical earth on a flat piece of paper cartographers try to preserve distance, area or direction by using models called projections. Maps using different projections will not align. The Belgian maps were also in metric units which caused problems for the British gunners since they were accustomed to using maps with 1,000 yard grids for range calculations. This was a real problem when trying to fire from a location on one map at a target located on an adjoining sheet, since the imperial grid overlapped at the map edges. Latitude and Longitude coordinates were also inconsistent. Most European countries used their own capital cities as the point through which to run their prime meridian or “zero line” of Longitude until 1884 when an international conference of 25 countries selected Greenwich, England as the location for the Prime Meridian. France chose to opt out and continued using Paris for several more decades. As a result, many of the maps available at the beginning of the war were published before the conference and suffered from the lack of a universal standard.

It was with some reluctance that the British realized the existing maps could not be altered to serve present needs. New maps with standardized grids, coordinates and contour intervals would have to be produced. Brussels was adopted as the prime meridian as well as the Belgian Bonne projection. Symbols and colours used became standardized between the Allies over time. Survey work with rod and transit or plane table was performed behind friendly lines but was impossible in front of them. Another method had to be found to map the area behind enemy lines. The airplane, although still in its infancy, supplied the answer. Vertical air photographs were taken for the purpose of piecing them together to form photo-mosaics which could be used for the creation of base maps.

Base maps were produced by the Ordnance Survey in Britain and shipped to France until 1918, when the rising threat to map shipments by U-boat activity in the Channel necessitated the creation of an Overseas Branch of the O.S. near St. Omer, France. Trenches and tactical information like the location of machine guns, trench mortars and barbed wire were printed onto these base maps by Field Survey Companies near the front. This meant the same base map could be used over and over again while trench and tactical information could be updated weekly or even daily for quick distribution to front line units. It also meant that a huge range of thematic mapping using these same base maps could now take place. Specialty maps were produced for almost every conceivable purpose: situation maps, intelligence log target maps, positions maps, enemy organization maps, enemy order of battle maps, hostile battery maps, traffic maps and army training area maps to name but a few.

One of these specialty maps was devised for a new tactic developed during WWI called a “creeping barrage”. By creating a curtain of artillery shells in front of advancing infantry, protection was provided while the soldiers were most vulnerable crossing “no-man’s land” between the trenches. Many artillery pieces were required to create such a barrage and the curtain had to be lifted and moved forward every few minutes in order to stay ahead of the advancing troops. This tactic required the utmost in coordination and it was only made possible through detailed barrage maps.

Another tactic to emerge later in the war was the ability to fire artillery “unregistered”. This was referred to as “predicted fire” or “map-shooting” and was essential for counter battery work. Registration was the act of firing one or more preliminary shots at the enemy to gauge range and elevation before being able to make a direct hit. In order to remove the need for registration and to preserve surprise before an attack, as many enemy guns as possible were located through aerial reconnaissance, flash spotting and sound ranging and plotted onto maps in the weeks prior to an offensive. Hidden Allied guns could then be sited on these enemy positions based on their map coordinates and at the opening of an offensive could strike without warning, thus knocking out the enemy’s battery and thereby allowing their own infantry to advance unmolested.

By the end of the conflict there were almost 5,000 men allocated to Map production and over 32 million maps had been printed. These figures alone illustrate the important role that mapping played during the war. McMaster University’s WWI Military Map Collection consists of over 400 trench and specialty maps. They range from very detailed operations maps used for trench raids to very broad overview maps used to show the entire front. Most are from the years 1917 and 1918 and many cover the Canadian sectors during the so-called “last hundred days” of the war.

You are invited to explore McMaster’s Trench Map Collection.