In Canada and Abroad: The Diverse Publishing Career of George Woodcock

George Woodcock—the prolific literary critic, poet, radio dramatist, historian, and social theorist—developed distinct literary reputations in Canada and abroad. His many works were issued by a great variety of Canadian and foreign publishers.

George Woodcock (1918-95) played a central role in the vibrant London literary scene of the 1940s as founder and editor of Now (1940-47), a periodical with anarchist leanings that included writers Mulk Raj Anand, Alex Comfort, Roy Fuller, Julian Huxley, Henry Miller, George Orwell, Herbert Read, Kenneth Rexroth, and Derek Savage among its contributors. When Woodcock moved back to Canada, the country of his birth, in 1949, settling with his wife on Vancouver Island, he found the Canadian arts scene “as bleak as a Winnipeg winter.” The one “shining exception” was the Canadian Broadcasting Corporation (CBC), for which Woodcock gave talks on literature and wrote radio dramas—several hundred programs worth—during the fifties. He relocated to Vancouver 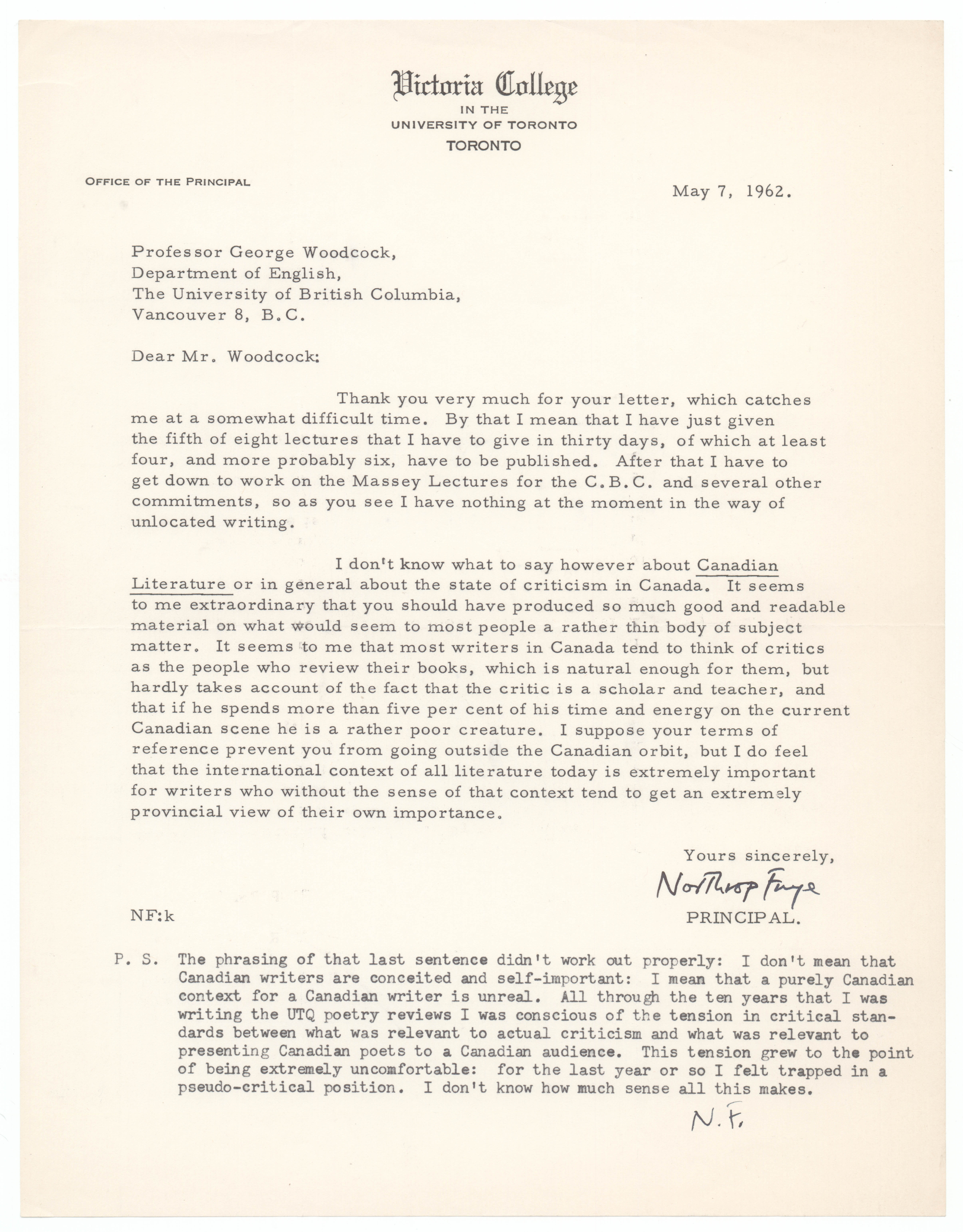 in 1956 to take up a position in the English department at the University of British Columbia (UBC), describing his new city of residence as a “literary desert.” Over the objections of prominent figures within the country’s literary firmament, who thought, with literary critic and professor, Northrop Frye, that Canada did not possess a proper literature of its own, Woodcock founded at UBC the critical quarterly Canadian Literature (1959-), the first journal dedicated to writing in Canada. The explosion in Canadian writing fostered by the Canada Council beginning in 1957, ensured that Canadian Literature had an abundance of material during the nationally-minded sixties and seventies. As editor of the journal until his retirement in 1977, Woodcock developed close relationships 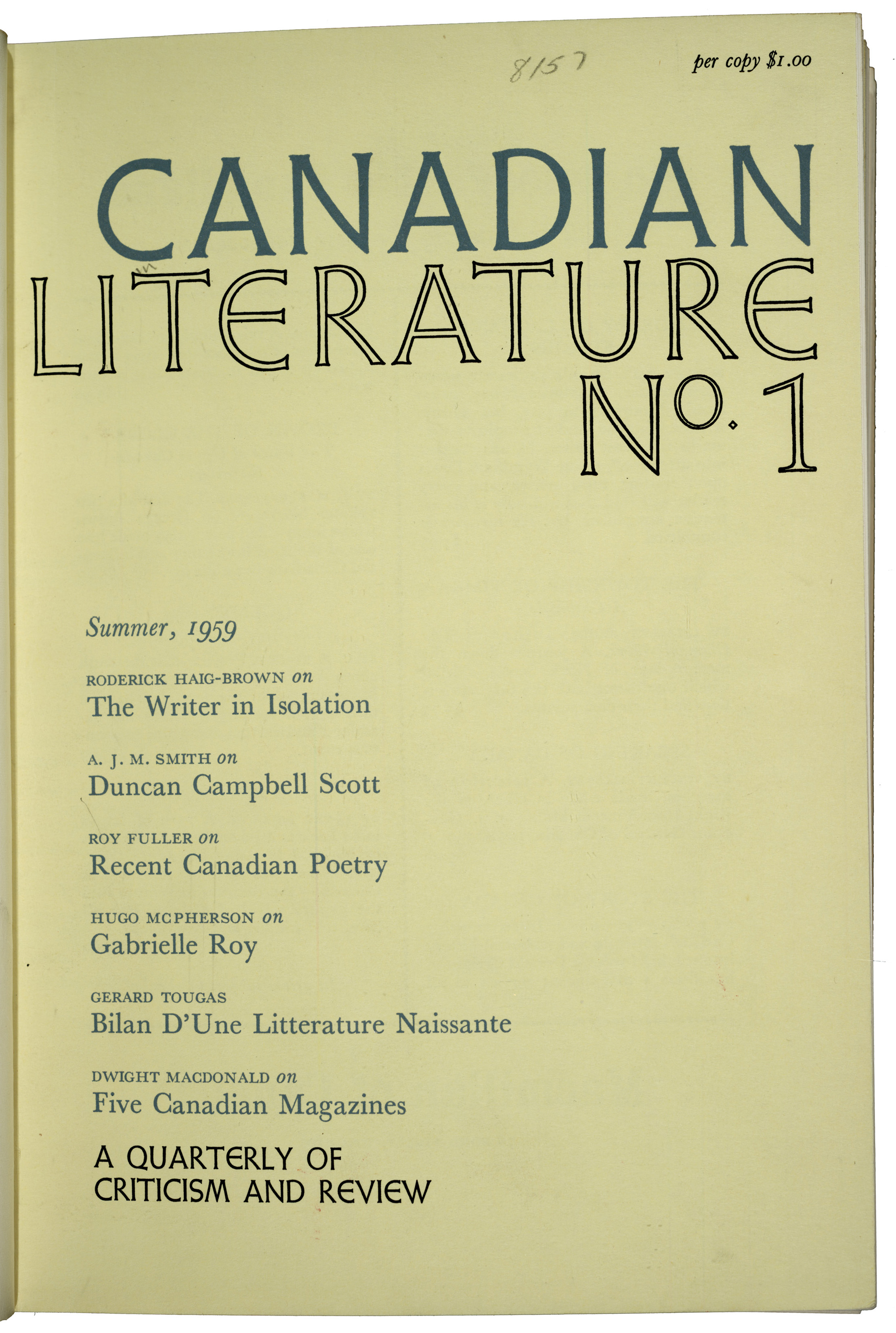 with the country’s most important writers and publishers.

In 1971 Woodcock contributed a background essay for the Royal Commission on Book Publishing, established by the Province of Ontario to examine an industry threatened by American takeovers. Noting that where a book’s subject matter was not specifically Canadian “the writer may still find publishers in this country unresponsive,” Woodcock recommended, to no avail, that the government provide subsidies for “the kind of books of international importance now published outside Canada by Canadian authors, so that we develop a well-rounded publishing industry.” Woodcock was writing, in part, from personal experience, for during the twenty years since his repatriation, five of seven of his books on Canadian history, travel, and criticism found domestic publishers, while out of twelve books not specifically Canadian in orientation, all but one (a collection of poetry) were easily published abroad. Ironically, The Crystal Spirit (1966), a critical study of his longtime friend George Orwell, won a Governor General’s Award, despite lacking a Canadian publisher. 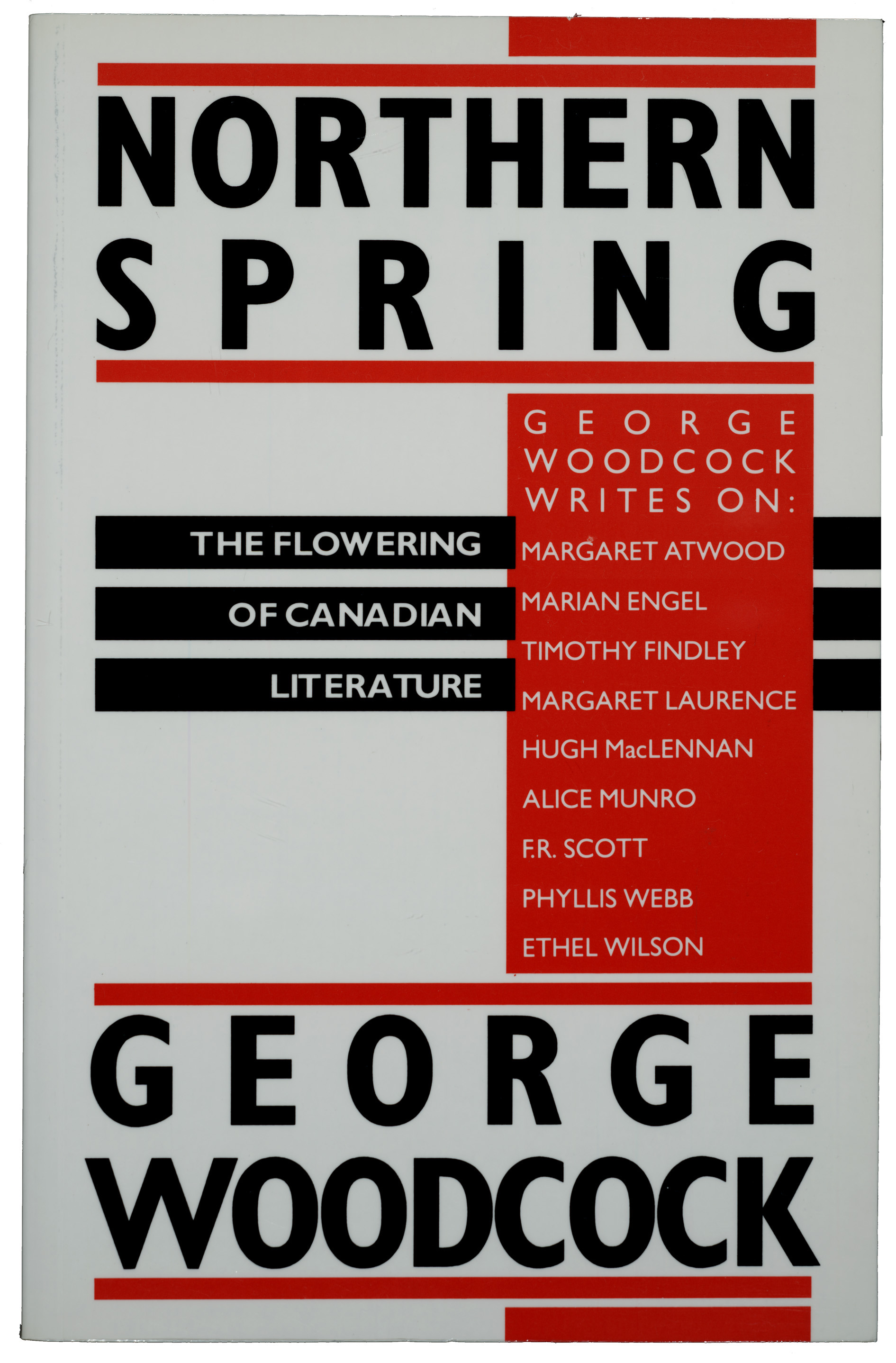 Over the next twenty years, publishing houses in Canada would bring to market thirty-five Canadian-themed books by Woodcock in the areas of history, literary and social criticism; fourteen volumes in the genres of poetry, drama, letters and memoirs; and many more books edited or introduced by him. These publishers included Anansi, Black Moss, Douglas & McIntyre, ECW, Fiddlehead, Fitzhenry & Whiteside, Golden Dog, Harbour, Hurtig, McClelland & Stewart, Oolichan Books, the Toronto branch of Oxford University Press, Quadrant Editions, Talonbooks, and Quarry Press. At home, Woodcock’s reputation was cemented as a major Canadian writer and leading critic of Canadian literature and society.

During this same period (1971-92) foreign publishers, in particular Faber & Faber in London and various presses in New York, published twelve Woodcock books without explicitly-Canadian orientation in the areas of history, travel, biography, and political theory. These titles, both unpublicized and difficult to find in Canada, preserved Woodcock’s reputation in England and the United States as the author 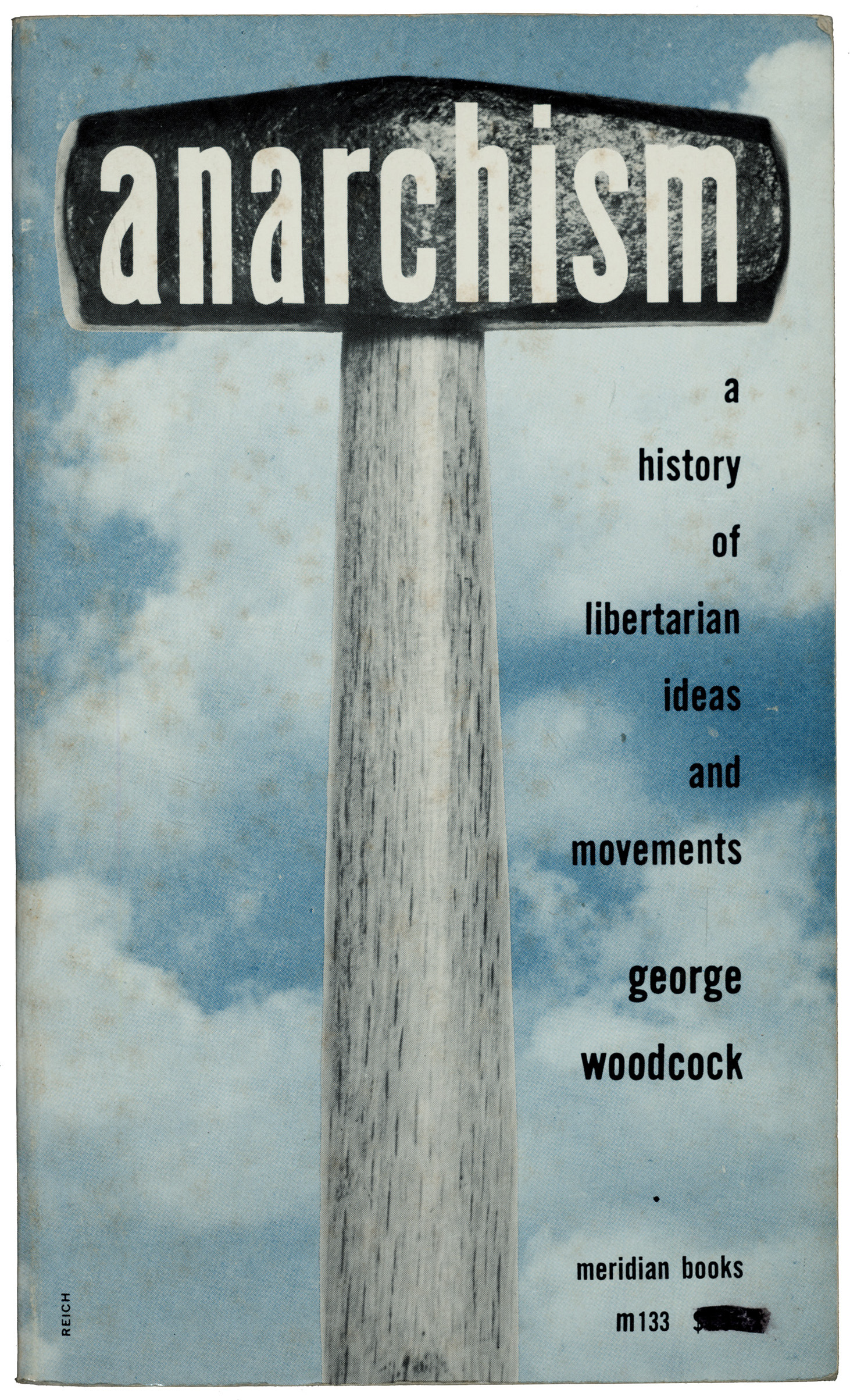 of travelogues on the Americas and especially Asia; the world’s foremost living theorist and historian of the anarchist movement; and the acclaimed critical biographer of his London contemporaries.

Writers for Canadian Literature and those reviewed by Woodcock were generally unacquainted with his international reputation. In 1974, friend and colleague Margaret Atwood asked, “Do you know Herbert Read’s very peculiar book the Green Child?” unaware that Woodcock had been commissioned by Faber to write the critical study Herbert Read: The Stream and the Source (1972), which devotes an entire chapter to this remarkable novel. In stark contrast to the great interest and positive reviews Woodcock’s book on Read received in London, that same year Toronto’s New Press published The Rejection of Politics, an important collection 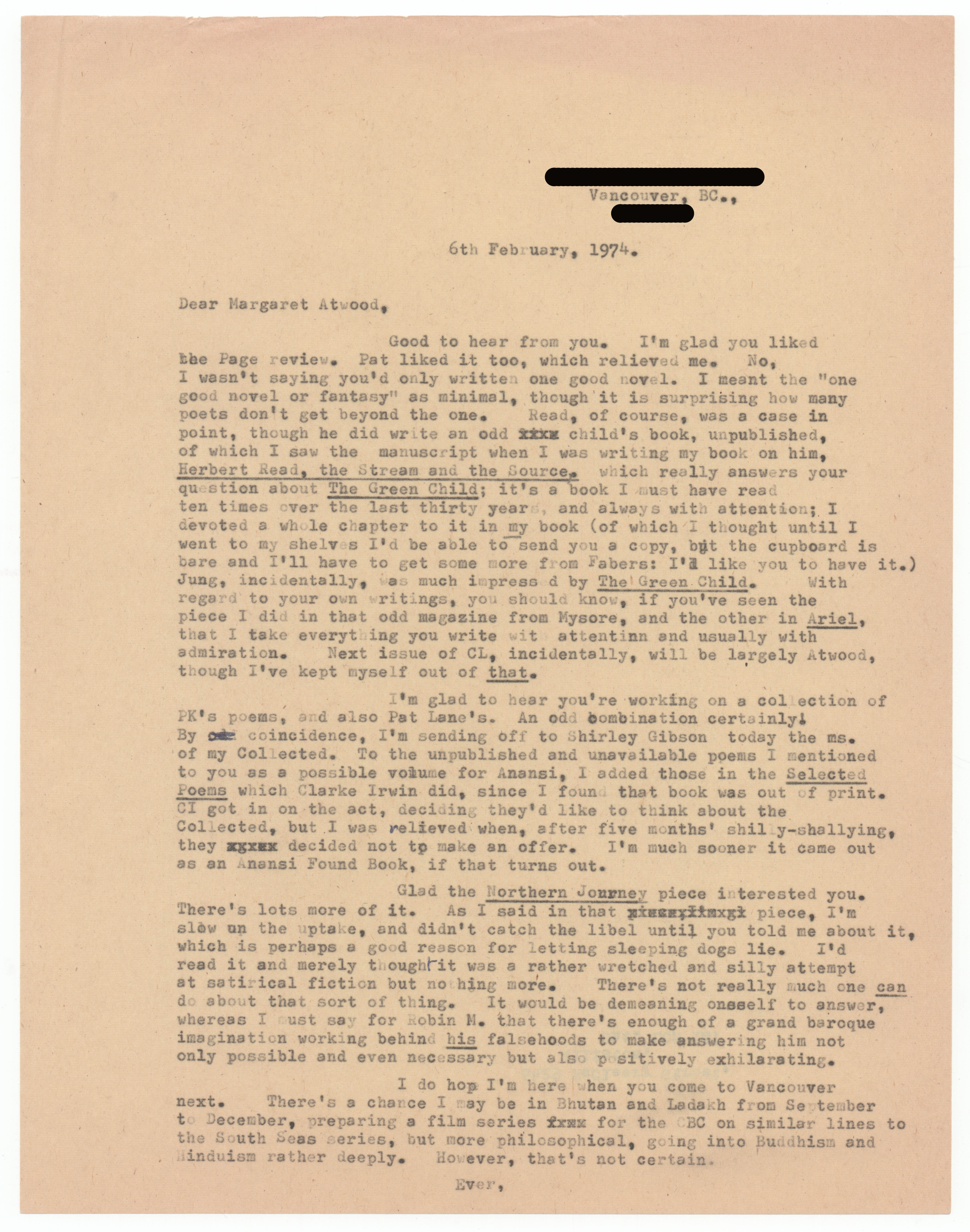 of essays with broad philosophical, political, and literary import. In the shuffle of New Press becoming a subsidiary of General Publishing, the book was not promoted and became among the least known and least profitable of Woodcock’s works. While disappointed with the outcome of publishing such a book in Canada, in the twenty years to follow Woodcock would increasingly find domestic publishers for his works of international relevance, publishing eleven such books in total, and broadening his Canadian literary reputation in so doing.

Publishing different sorts of books in different countries helped make Woodcock’s varied intellectual interests appear unrelated for decades. It has been left to current scholars to determine what role Woodcock’s preoccupations with Asia, anarchism, and his London literary scene played in the specific and unparalleled influence he had upon the development of Canadian literature during the sixties and seventies.

The Complete Record of George Woodcock:[scheduled to launch late 2009]: www.georgewoodcock.ca