Douglas Gibson’s success as a publisher can largely be attributed to his savoir faire, his passion for good books, and his diplomatic and insightful skills as an editor. The Douglas Gibson Book imprint under the auspices of McClelland & Stewart provided Gibson with the autonomy he needed to work very closely with a few select authors. This case study highlights his particularly fruitful professional relationship with Alice Munro, with whom Gibson continues to work after thirty years. In addition to the digital images that accompany this study, appended are several promotional audio clips prepared and read by Douglas Gibson.

Douglas Gibson’s illustrious publishing career began in March 1968 when he was hired as an editor at Doubleday Canada. In 1974 he joined Macmillan of Canada 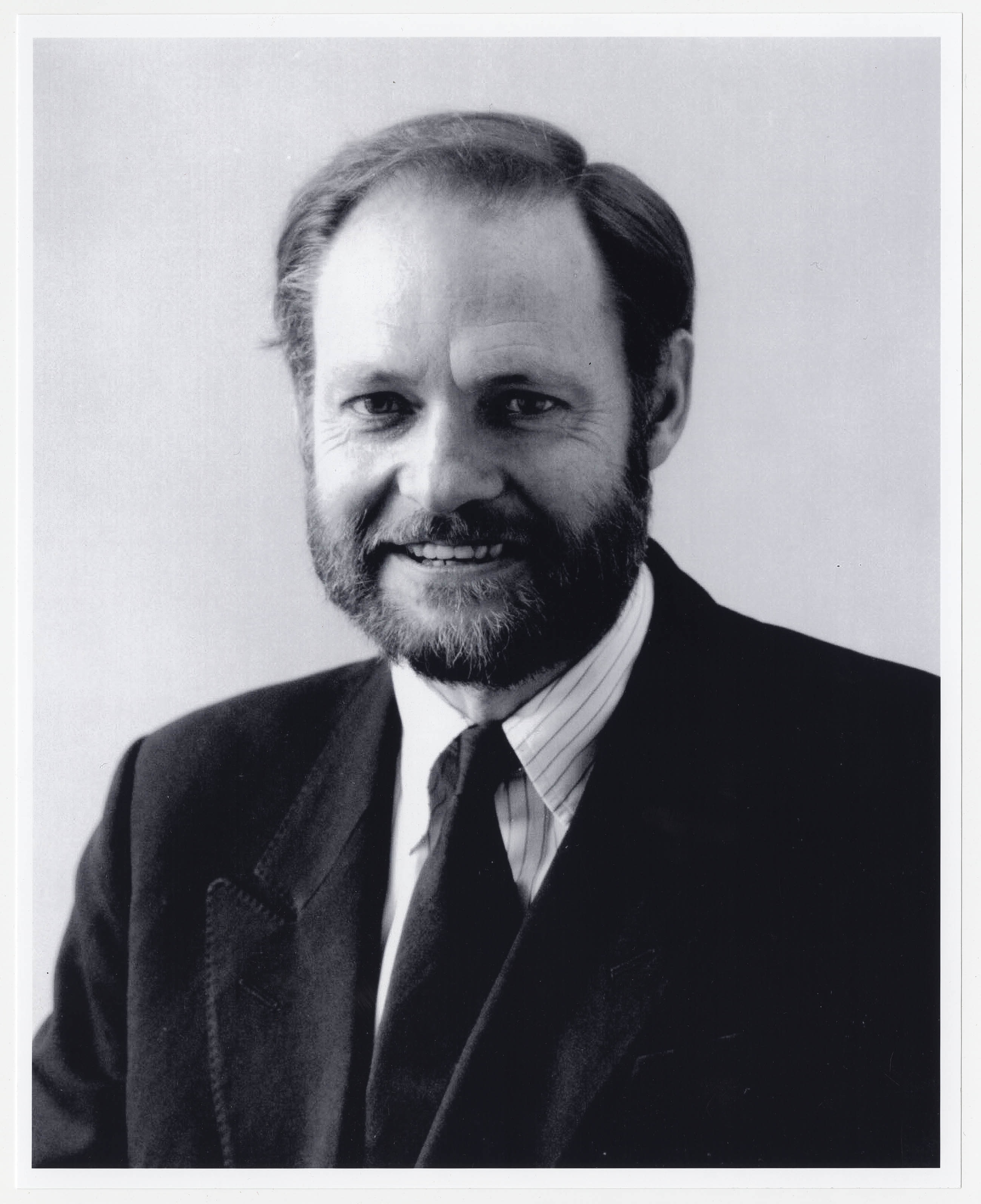 as editorial director; five years later, he achieved the designation of Publisher at the company. At Macmillan he edited the works of Morley Callaghan, Bruce Hutchison, Mavis Gallant, and Robertson Davies. In December 1985, when Jack McClelland sold McClelland & Stewart (M&S) to Avie Bennett, Bennett (under McClelland’s advice) sought to bring Gibson on board as part of his efforts to rejuvenate the publishing house. Bennett drew Gibson to M&S from the rival Macmillan, by promising Gibson his own 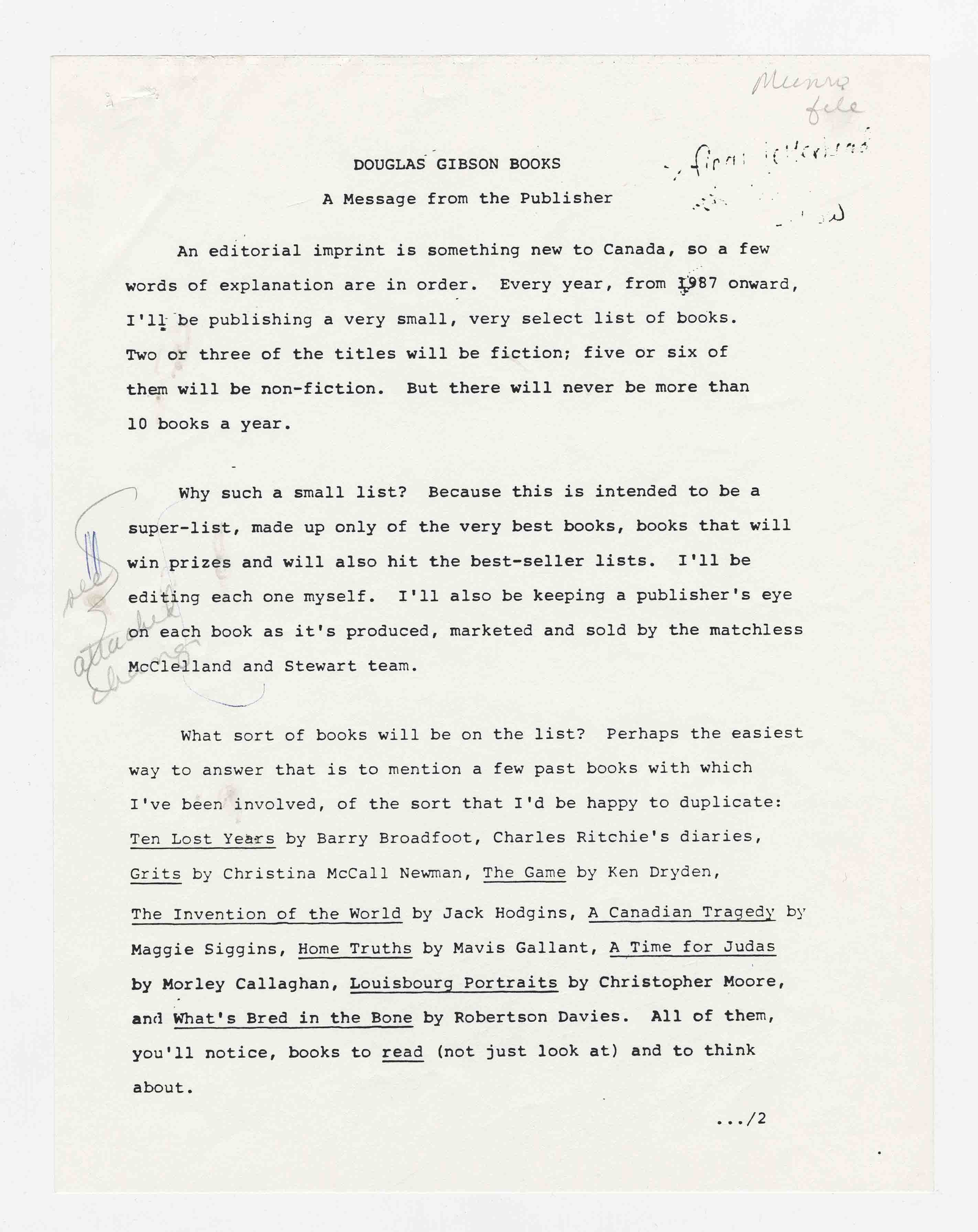 editorial imprint, the first in Canada. Evidently, this offer was too good to refuse: Gibson joined M&S in March 1986, where he presided as Editor and Publisher of Douglas Gibson Books. With his own imprint, Gibson was granted the autonomy he desired, to oversee minute details of the books he was publishing. Gibson’s mission was simple: to work closely with a handful of authors, to publish a “super-list” of titles, “made up only of the very best books, books that [would] win prizes and [would] also hit the best-seller lists.” Gibson set out to publish five to ten books a year — “books to read (not just look at) and to think about.”

Gibson’s mission must have resonated with Hugh MacLennan, W.O. Mitchell, and Alice Munro, who were the first authors to be published under Douglas Gibson Books. Each had left Macmillan of Canada in order to continue working with Gibson. Munro told the Globe & Mail (1 May 1986): “It's not so much the specific editing of the text as the feeling that the book will be in good hands that's important.”

Munro’s writing has been in very good hands indeed. She left McGraw-Hill 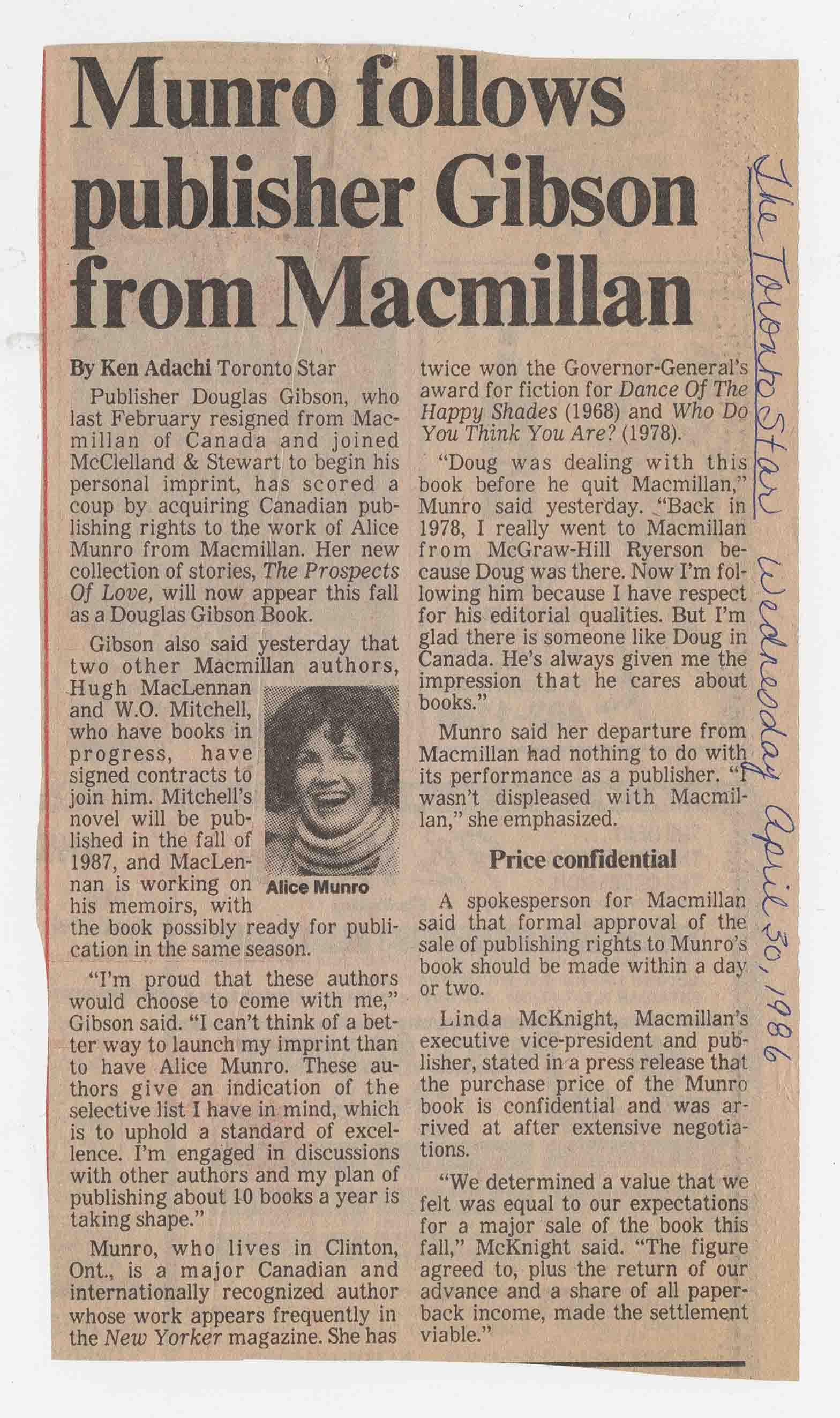 Ryerson for Macmillan in 1978 in order to work with Gibson on Who Do You Think You Are? She then followed Gibson to M& S, telling the Toronto Star (30 April 1986): “Now I’m following him because I have respect for his editorial qualities. But I’m glad there is someone like Doug in Canada. He’s always given me the impression that he cares about books.” Gibson has similarly high praise for Munro: “I can’t think of a better way to launch my imprint than to have Alice Munro [as an author].” The sanctity of Munro and Gibson’s author-publisher relationship is rooted in their profound, mutual trust, which has enabled them to bring their shared literary visions to fruition.

The first Munro book published under Douglas Gibson Books was The Progress of Love. Gibson and Munro had begun the editing process while they were both involved with Macmillan, so an agreement had to be drawn up to transfer publishing rights. After the book was printed, Gibson sent Munro twenty copies and wrote: “I’m sure you’ll agree that the book looks every bit as elegant as the mythical book we both dreamed about ...”

Their creative collaboration has garnered numerous literary awards for Munro. Due to his promotion to the role of Publisher at M&S in September 1988, Gibson had to reduce the number of authors he could work with under his own imprint to three or four per year. His new leadership position drew many writers with whom he had worked in the past to M&S. He retained Munro as a Douglas Gibson Books author.

When Munro won the 1990 Canada Council of the Arts Molson Prize, Gibson received several congratulatory letters. In one such letter, Aaron Milrad, Gibson’s 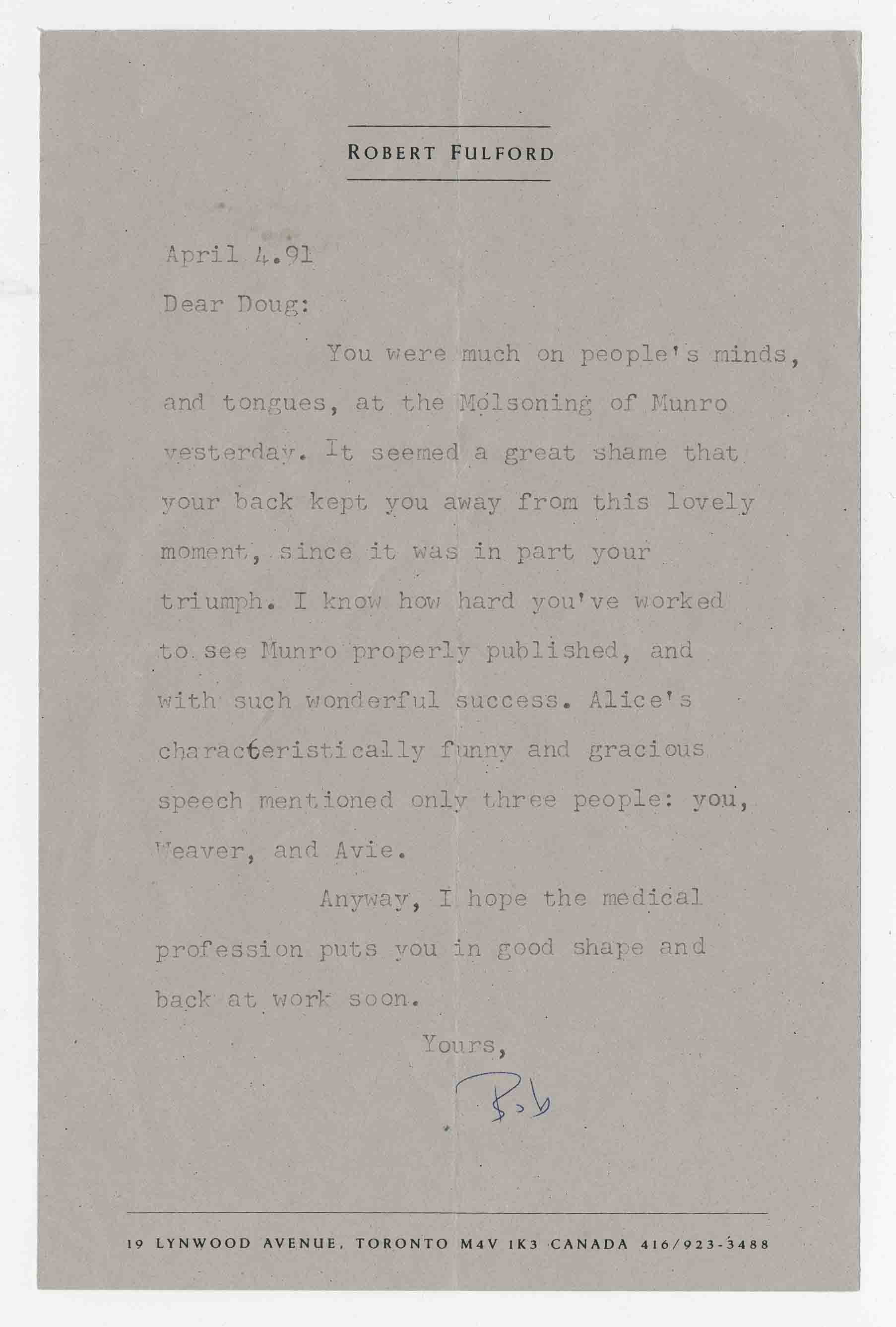 friend and lawyer, stated: “I am certain that your effort has not been insignificant in assisting to bring this most talented and special writer to the attention of the public in Canada and abroad.” Robert Fulford wrote: “You were much on people’s minds, and tongues, at the Molsoning of Munro yesterday. It seemed a great shame that your back kept you away from this lovely moment, since it was in part your triumph. I know how hard you’ve worked to see Munro properly published, and with such wonderful success.” It is ever clear to everyone that Gibson’s work has been instrumental to Munro’s success. In 1991, Gibson won the Canadian Booksellers Association (CBA) President’s Award in recognition of his work with the authors he had developed under his imprint. 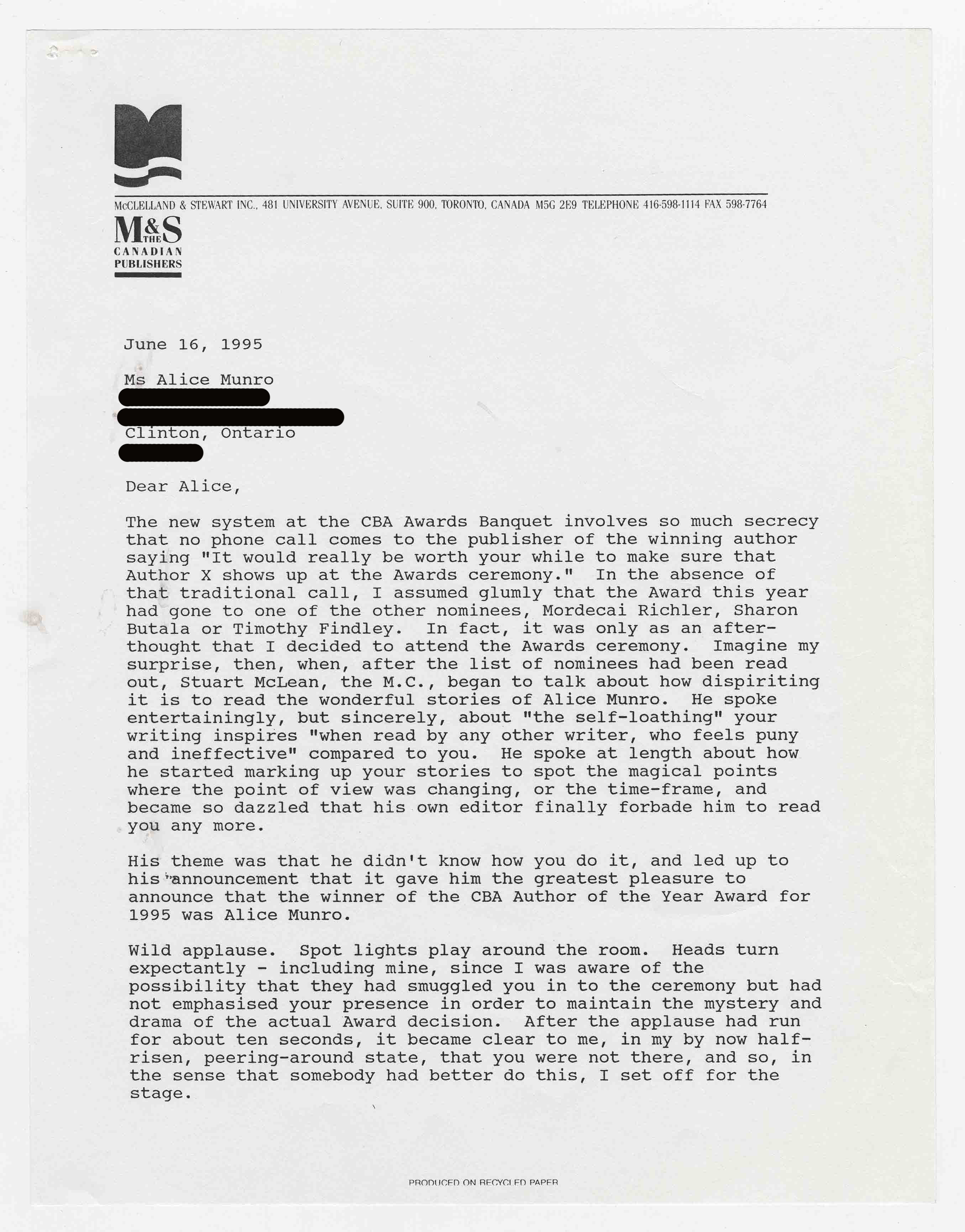 When Alice Munro won the CBA’s Author of the Year award for 1995, she was absent from the banquet. Gibson attended and, in a congratulatory letter to Munro, sent an account of the ceremony which is charmingly self-deprecating; he includes the acceptance speech he delivered on her behalf. Perhaps this is at the root of their strong working relationship: they are able to put their utmost trust in each other’s immense talent and capabilities because they are not caught up in their own.

The nature of their relationship is nicely echoed in an author profile Gibson wrote for READ Magazine in 2001. In the article, Gibson has only the highest praise for Munro: “If you were scouring the world for the opposite of a prima donna, you’d need to look no farther than our own Alice Munro.” He goes on to downplay his role as 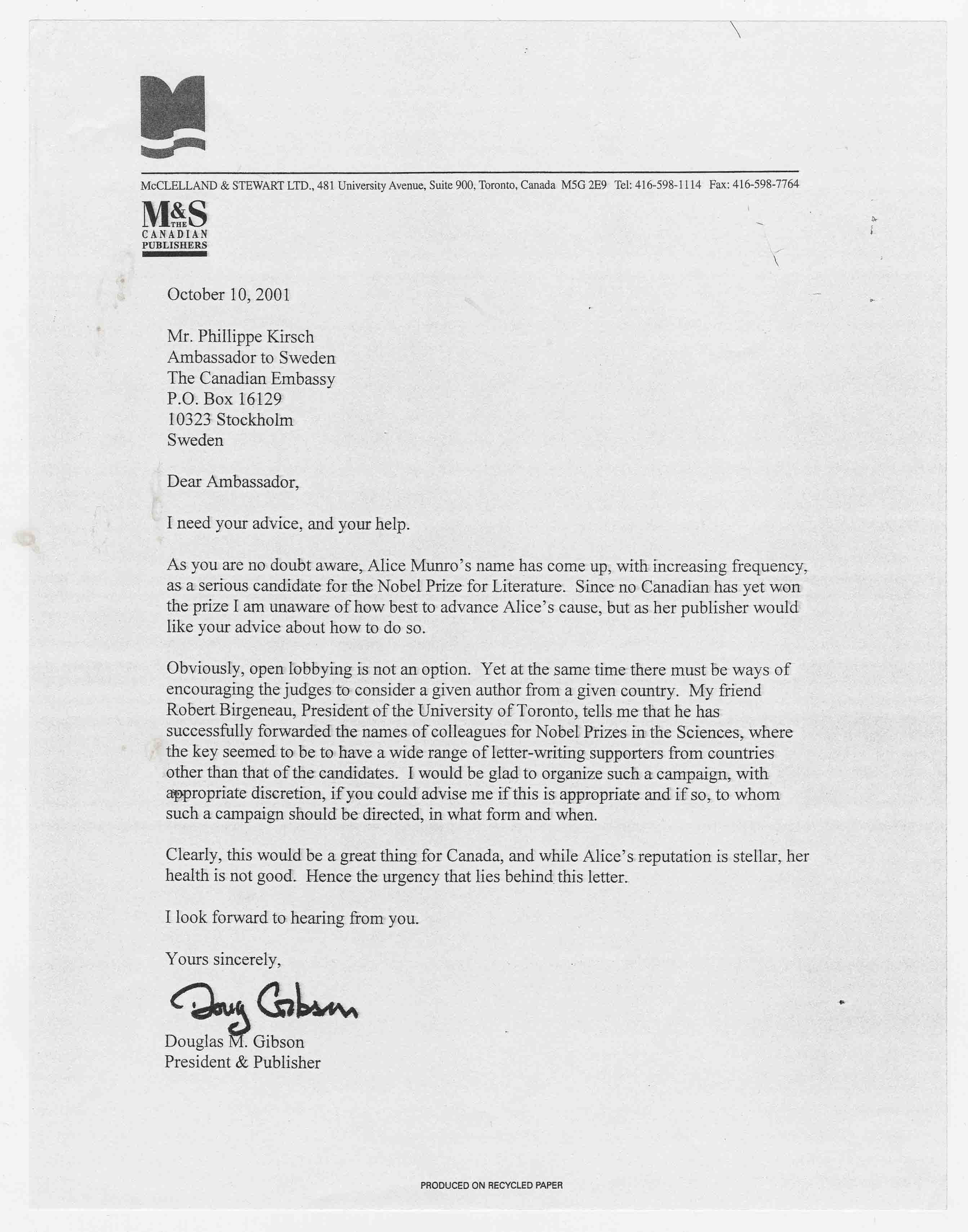 editor, suggesting that her work requires little editing on his part, so that his “main editorial challenge is to think of cover copy that is worthy of [it].” Gibson light-heartedly accuses Munro of being “modest to a fault,” a virtue of which, one might argue, he is similarly guilty. His devotion to his work and his faith in the brilliance of Munro’s writing is shown in a letter he writes to Phillippe Kirsch, the ambassador to Sweden, in which he asks how one might nominate Munro for the Nobel Prize for Literature. His role as her editor goes far beyond merely writing cover copy for her books, as he continually strives to ensure Munro receives the recognition she deserves. 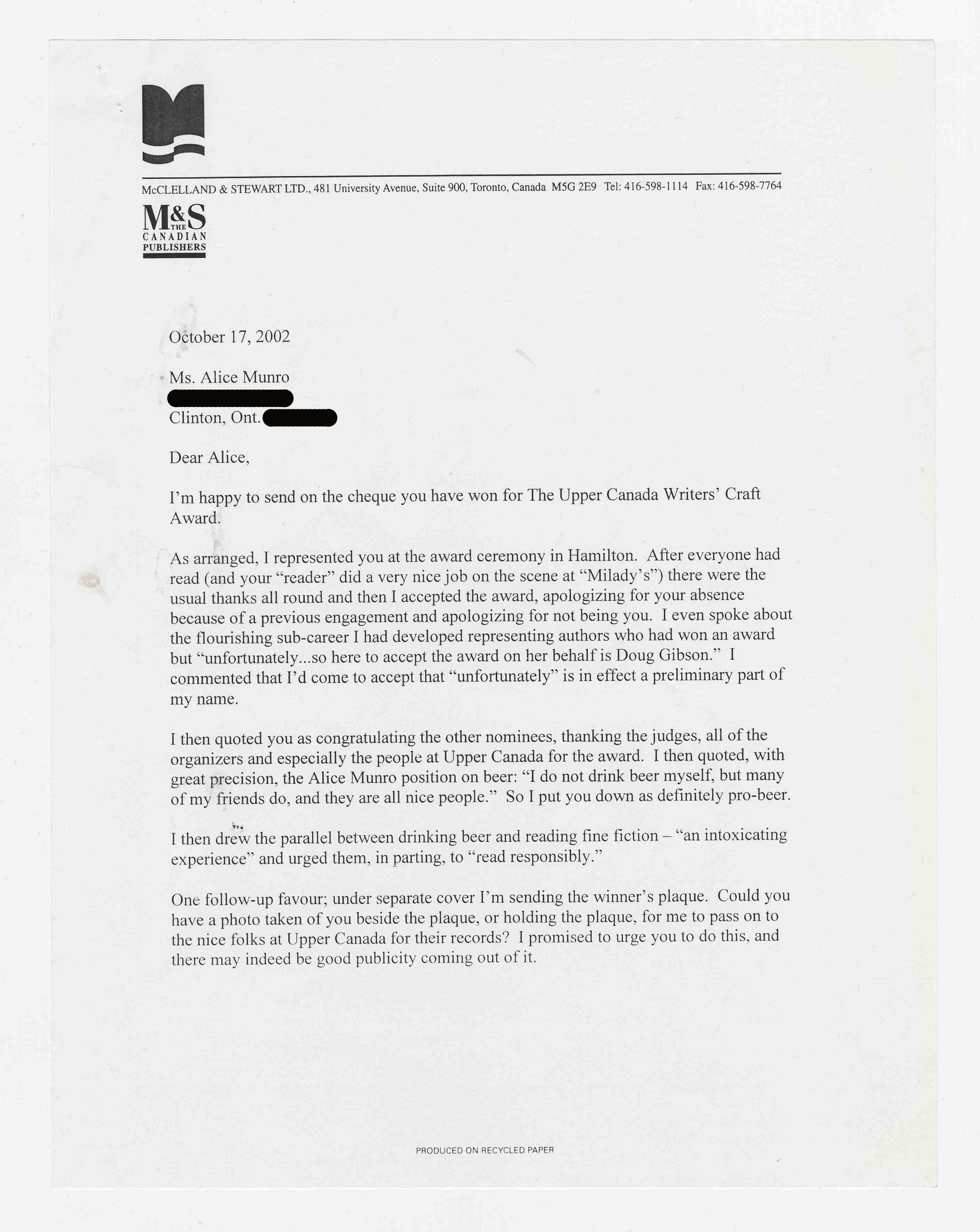 It is thus entirely appropriate that Gibson’s READ Magazine article ends with the quaint image of Gibson patting Munro’s hand goodbye during a visit with her in the emergency room at the Comox hospital. Although he jokes about it (“she and I are very Scottish in our wildly demonstrative affection after nearly 25 years of working together”), this little gesture is imbued with care, the very thing that characterizes Gibson’s relationship with Munro and her writing, as well as his relationships with his other authors, and, by extension, with their books.

In July 2000, Gibson was made President and Publisher of McClelland & Stewart. He was succeeded by Douglas Pepper in 2004, and returned to managing his own imprint, publishing five to ten books a year. In addition to publishing works by Alice Munro, he has worked alongside such literary giants as Robertson Davies, Mavis Gallant, W.O. Mitchell, and Alistair MacLeod, and with important Canadian figures, including Peter Gzowski, Pierre Trudeau, Paul Martin, and Brian Mulroney. In July 2008, Gibson left M&S after more than twenty years with the firm. He remains publisher emeritus of Douglas Gibson Books. Gibson is also working on his own memoir, which undoubtedly will read like a wonderful novel replete with entertaining stories of his many interactions with authors.