New Business: The Impact of Fifth Business on Roberston Davies's Relationship with his Canadian Publishers

From the beginning of his career Robertson Davies (1913-95) was considered a talented and respected author who had written many successful books, including the Salterton trilogy and several works under the pen name of Samuel Marchbanks. It was not until the publication of Fifth Business in 1970 that he achieved true international success. As Judith Skeleton Grant observes in her biography, Robertson Davies: Man of Myth, the novel Fifth Business was “the book that made his reputation,” and had an immense impact on Davies’s writing, his career, and the development of Canadian literature.

Until the early 1950s, Davies, at one time an aspiring actor, wrote plays in the hopes of becoming a successful dramatist. He switched to novels after deciding that plays were an ineffective means of expression because his creative aims were often diluted or lost by the demands and interpretations of 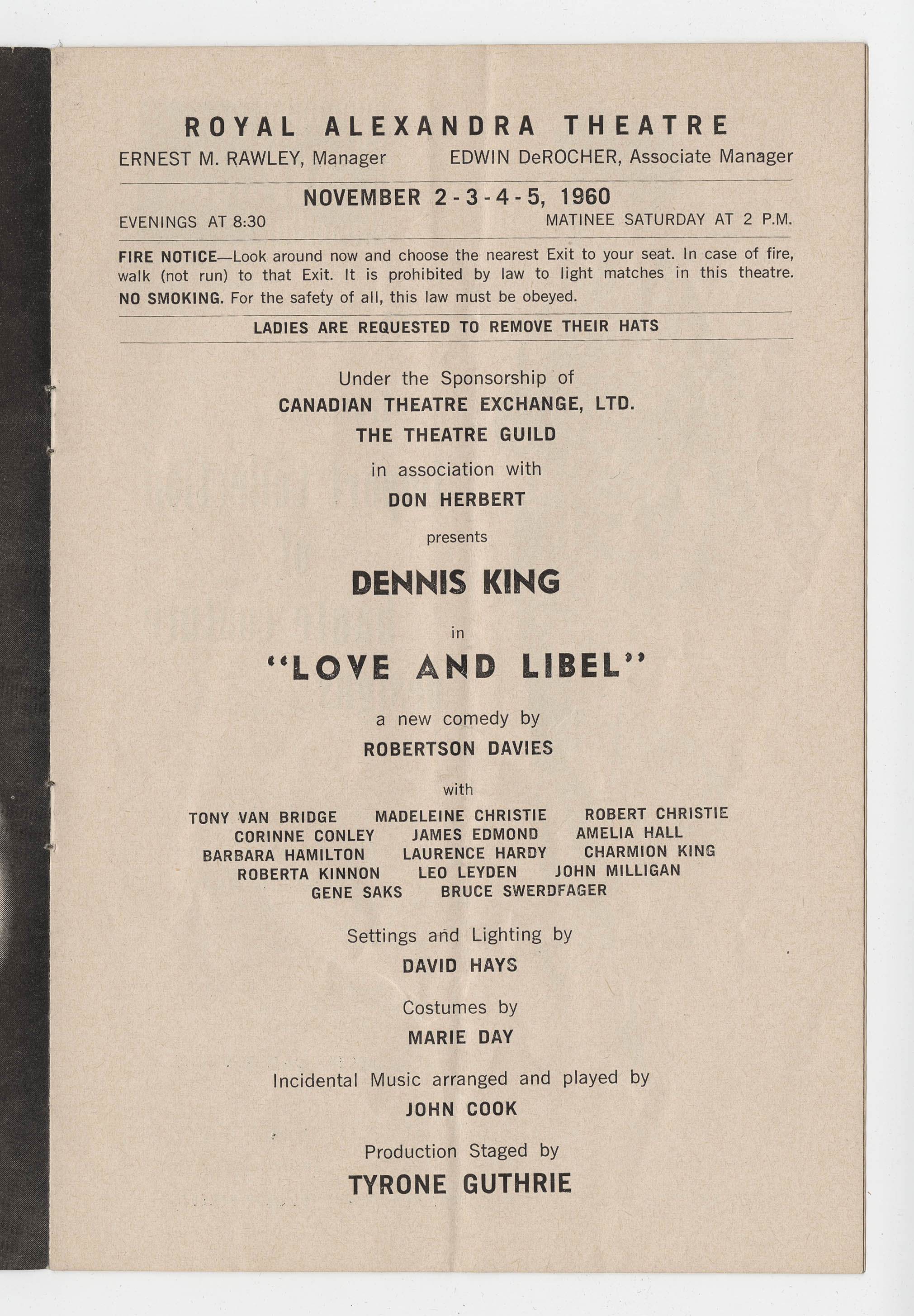 directors and producers. In an interview with Elizabeth Sifton in 1986, he noted that as a playwright “You’re perpetually subjected to governance by people who haven’t written the play … When you’re a novelist, you’re writing a play but you’re acting all the parts, … and it’s your show.” The desire for creative control would follow Davies throughout his career and would be a major point of contention in his relationships with publishers. As Grant notes, Davies would not be “in full command of his creative powers” until Fifth Business when his writing became more confident and more emotionally present. It was this presence that spoke to readers in both North America and Great Britain and propelled the book to enormous success. 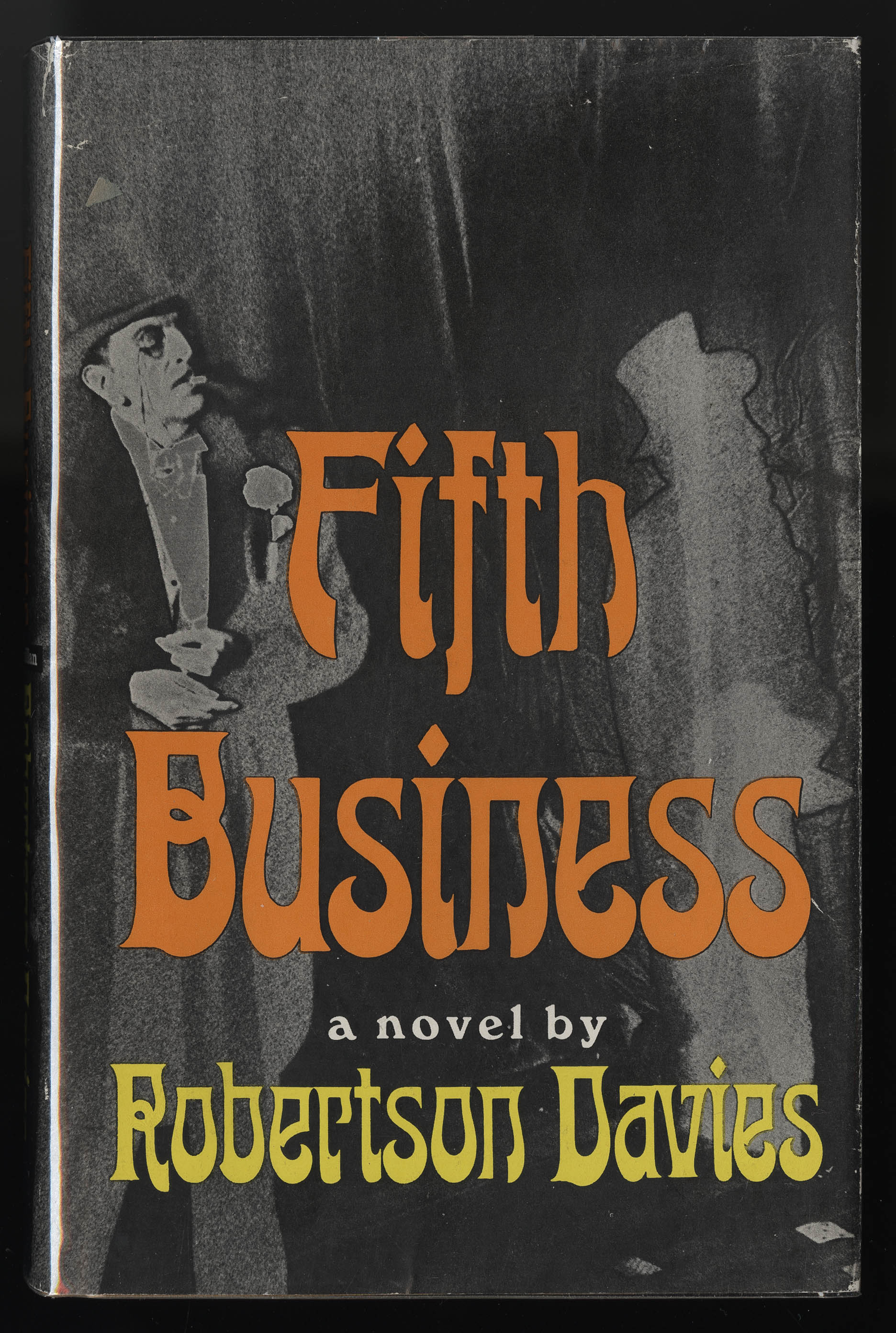 Fifth Business did not have an immediate impact on the literary world. When first presented to publishers, response to the manuscript was lukewarm at best. John Gray of the Macmillan Company of Canada said it was “lacking warmth and immediacy,” a sentiment shared by several other publishers, including Charles Scribner and Sons, who declined publication. After resolving a few points, the manuscript was accepted by Macmillans in England and Canada and the Viking Press in the United States, but the battle for the book’s commercial success was far from over. After publication, it received several negative reviews in the Canadian press. In the United States, however, it was quite a different story. Fifth Business was very favourably reviewed in the Washington Post, the Chicago Tribune, and the New York Times where it rose to tenth 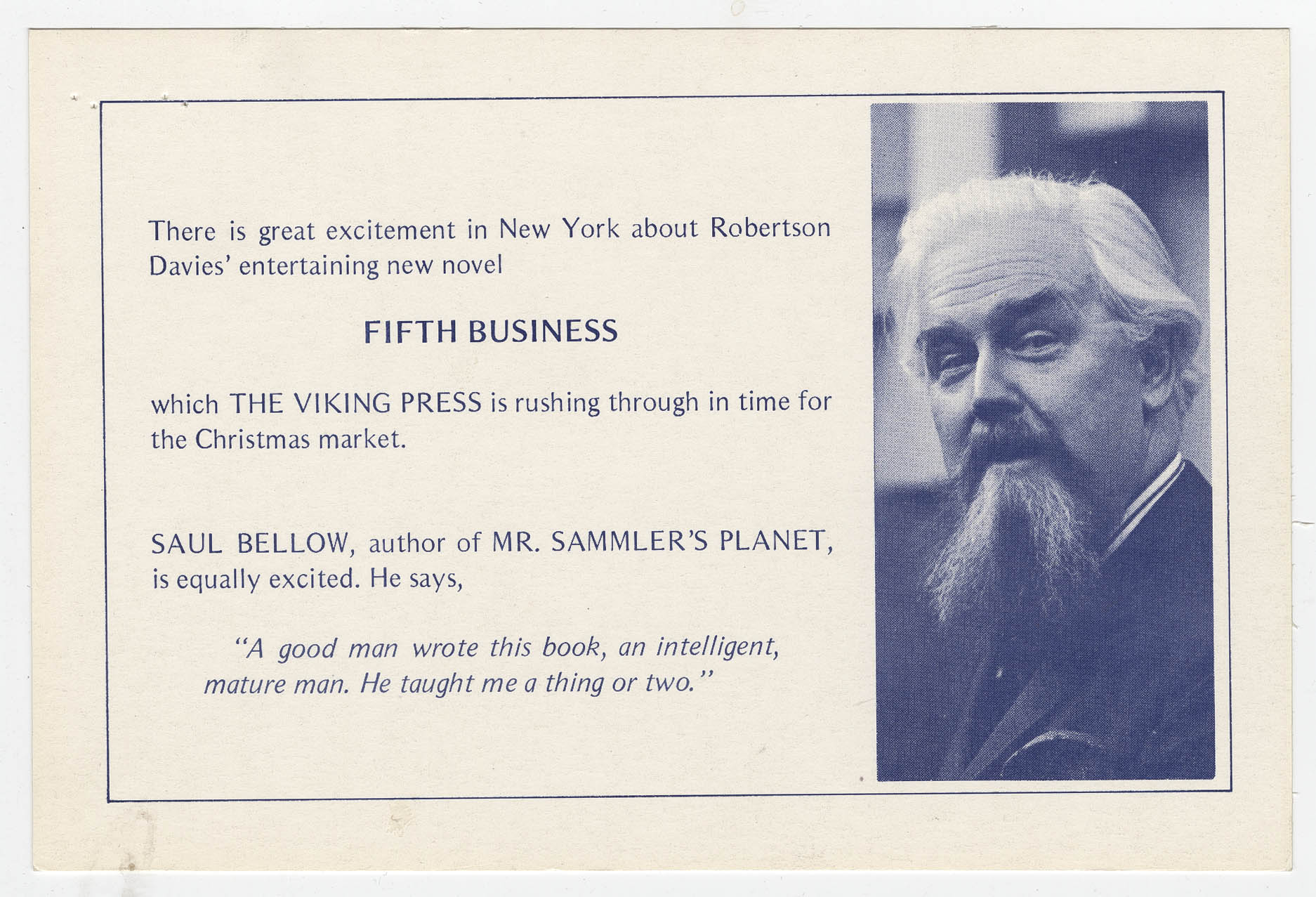 position on the best-seller list, causing Americans to take notice of the talent emerging from “America’s attic” (Davies’s term for Canada). But, more importantly, the attention the novel was receiving south of the border made Canadians take notice of their own country’s creative output.

The American reaction had a huge influence on Canadian readers and, combined with the marketing efforts of Macmillan, the novel became a Canadian sensation. This spawned a rigorous schedule of television appearances, radio and newspaper interviews, and lectures for Davies. In 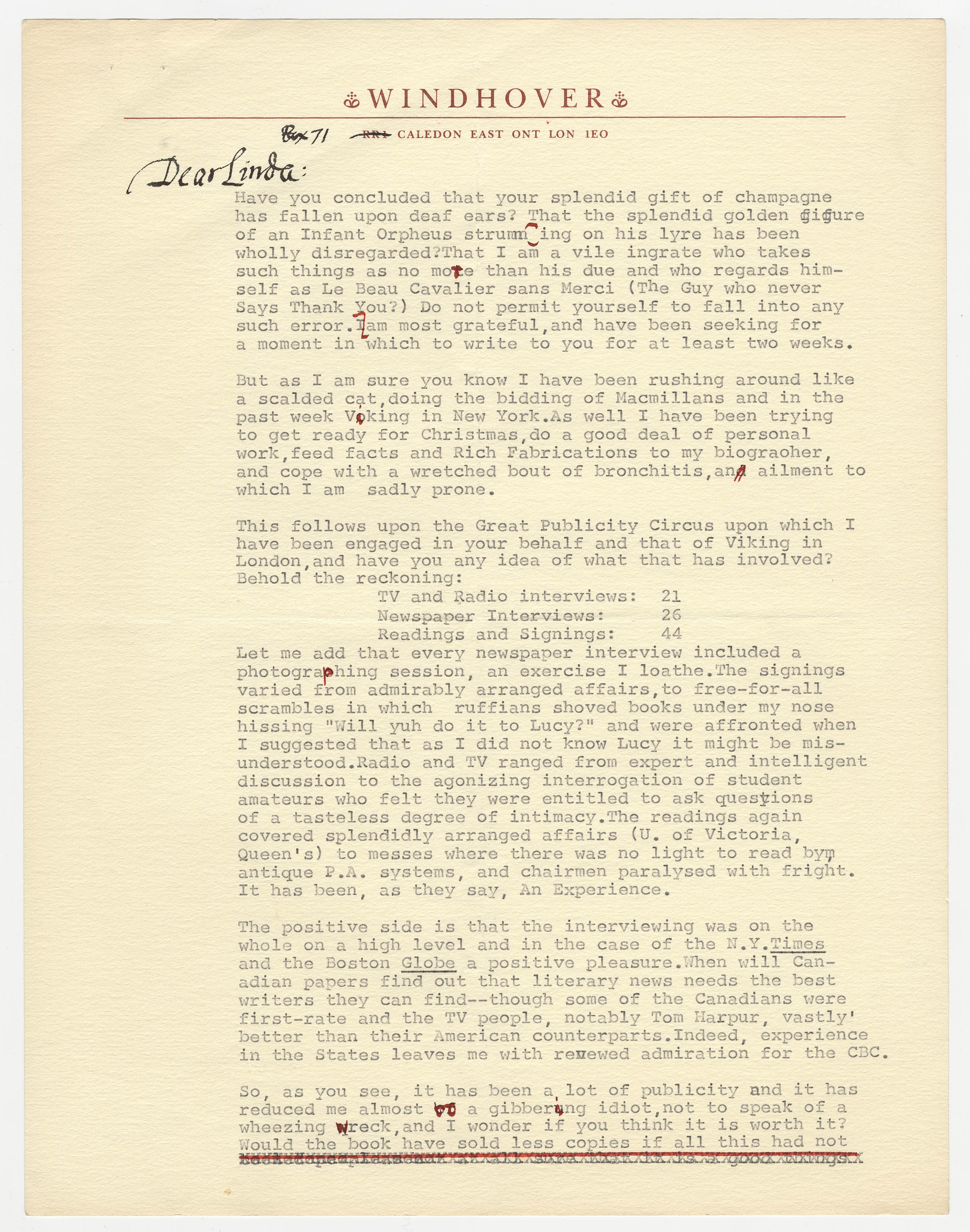 1971, he wrote to Linda McKnight of Macmillan Canada that he had been to 21 television and radio interviews, 26 newspaper interviews, and 44 readings and signings, all in only a year since the novel’s publication. Fifth Business rose to the number one position on the Toronto Daily Star’s national best-seller list and sold 145,800 copies by the end of 1976.The success of Fifth Business, and the exposure it brought Davies, significantly increased his sales potential. He became more interested in marketing his novels internationally, which in turn caused him to examine his Canadian publishing ties and the role of his American publishers. 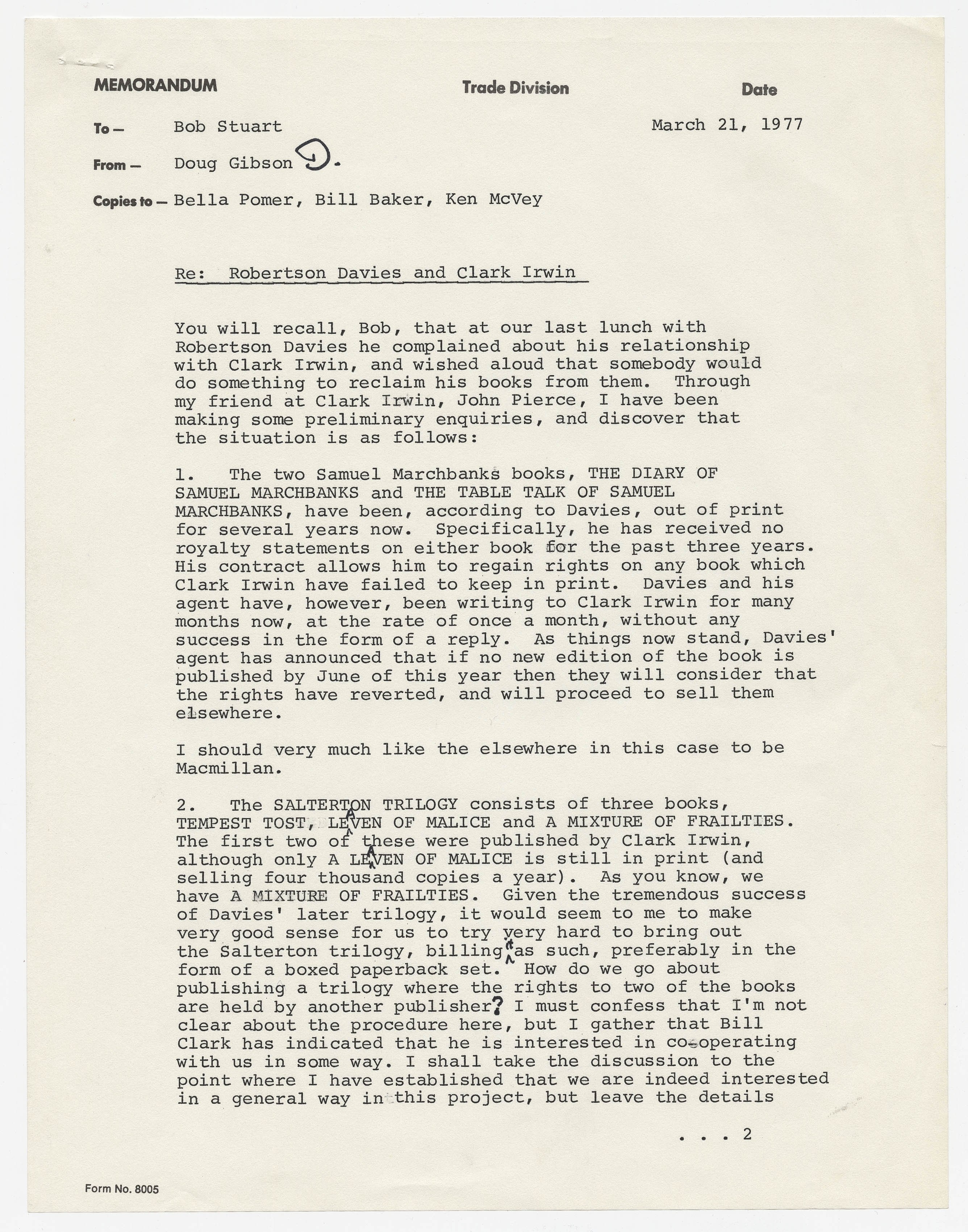 Davies began his writing career with the Toronto publishing firm of Clarke, Irwin, which issued his first non-fiction works, a number of his plays, and the first two books in the Salterton trilogy, Tempest-Tost and Leaven of Malice. Overall the relationship between author and publisher was amicable, but conflicts began to arise, especially over the publication of Twice Have the Trumpets Sounded (1954, co-authored with Tyrone Guthrie and Grant Macdonald) and during negotiations for the publication of A Mixture of Frailties, the final Salterton volume. As Carl Spadoni notes, Davies felt that Clarke, Irwin held too much creative control over his work. In addition, one of his primary demands was that Willis Kingsley Wing, his American agent, would have full independence in marketing his books in America. Unwilling to meet these demands, Clarke, Irwin declined A Mixture of Frailties, and the author moved to Macmillan of Canada. Although the split with Clarke, Irwin was not overtly hostile, it was clear that Davies was relieved to be released from the creative constraints that had been placed on his work by the company. 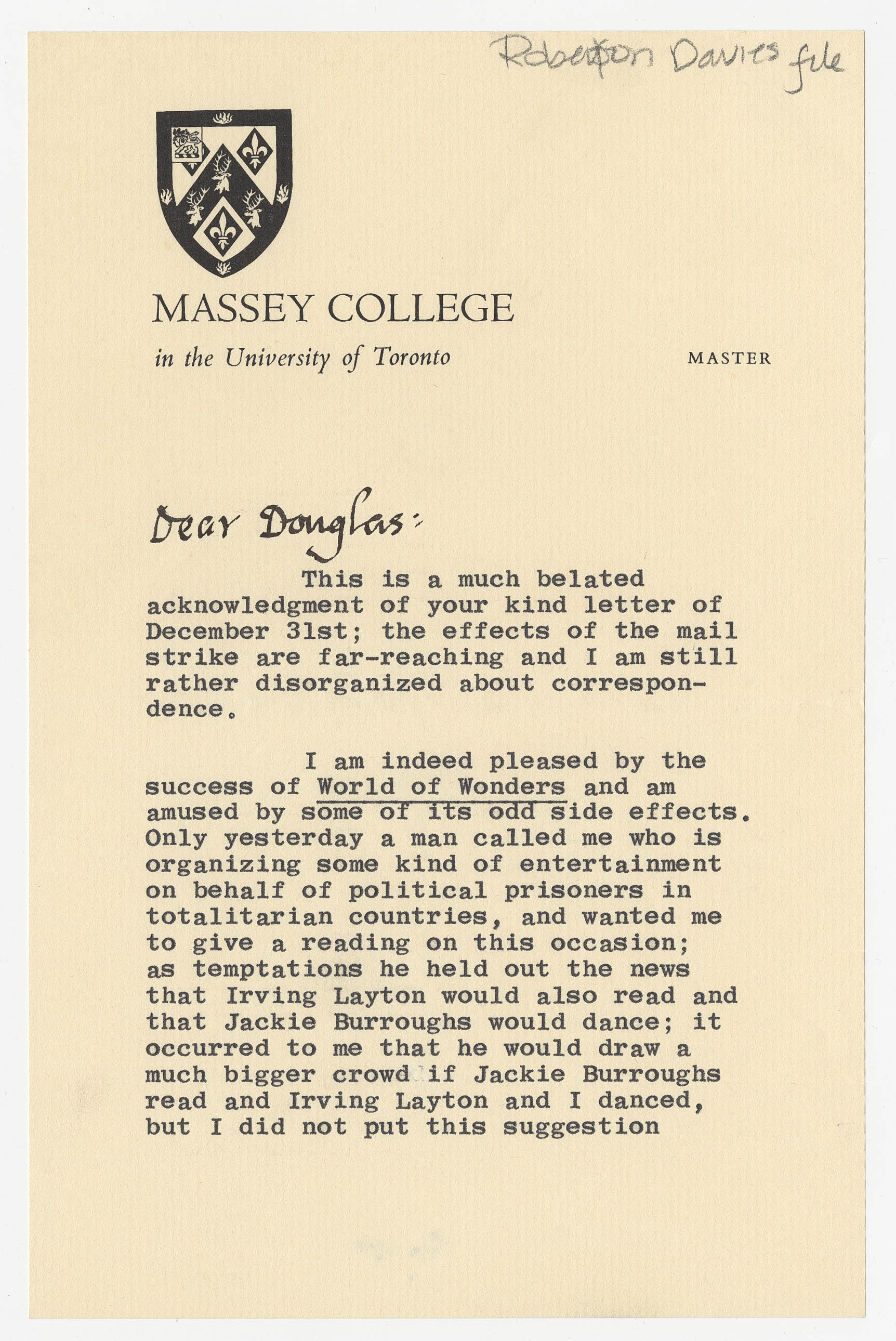 The move to Macmillan of Canada went smoothly for the author, and he enjoyed a close personal relationship with John Gray, Ramsay Derry, Douglas M. Gibson, and other representatives of the firm. Macmillan frequently sent Davies personal letters informing him of the different stages of publishing and providing him with sales reports; Davies remarks in a letter to F.A. Upjohn of Macmillan that Clarke, Irwin had been unwilling to engage in such correspondence. Davies too, frequently wrote letters and did personal favours for Macmillan executives, including trying to obtain summer employment for John Gray’s son at the Peterborough Examiner, where Davies was editor until 1965. This personal relationship was also seen in his letters to Gibson in which they discuss their family news candidly and arrange lunch dates and book exchanges.

Beginning in 1958 with A Mixture of Frailties, Macmillan would publish every one of Davies’s major books with the exception of A Voice from the Attic, which was initiated by U.S. publisher Alfred A. Knopf and published in Canada by McClelland & Stewart in 1960. The relationship with Macmillan of Canada continued until 1989 when Davies officially became a McClelland & Stewart (M&S) author after Doug Gibson left Macmillan to become an editor at M&S. By the year 1980 when Macmillan of Canada was sold to Gage Publishing, Macmillan had turned away from literary and trade publishing and placed an emphasis on non-fiction and textbook publishing. This change of direction, and Gibson’s departure, had not pleased Davies, prompting his move to M&S. Perhaps it was Davies’s taste for American publishers that prompted Macmillan executive Hugh Kane to remark in a memo to Macmillan executive, Bella Promo: “Davies is not one of those authors who has any keen sense of loyalty to a publisher.” Yet, no matter how many American publishing houses Davies may have worked with he always dealt primarily with or through Canadian publishers, wishing always to support and contribute to the Canadian literary scene.

Through the success of Fifth Business and the other novels of the Deptford and Cornish trilogies, Davies became a Canadian literary legend. He was a constant presence in the Canadian publishing scene and a firm supporter of Canadian arts. Davies was able to further Canada’s reputation and strengthen a national sense of identity through his many lectures, readings, and novels. This is especially true of Fifth Business. As Grant eloquently notes, this book “created a story in which many Canadians recognized their nation’s own struggle toward self recognition and national identity. Fifth Business … can be fairly called one of the important novels of the century.”

Spadoni, Carl. “Leacock, Davies, and Their American Publishers.” In American and Canadian Literature and Culture: Across a Latitudinal Line: Papers from the Saarbrücken Mediation Project, ed. Klaus Martens and Paul Morris, 151-64. Saarbrücken: Centre for Canadian and Anglo-American Cultures/Amarant Presse: 2008.