Marjorie Harris’s The Canadian Gardener was a labour of love and helped usher in the gardening craze of the 1990s. This article situates Harris within the history of Canadian women garden writers, and describes the process of researching and publishing the book. 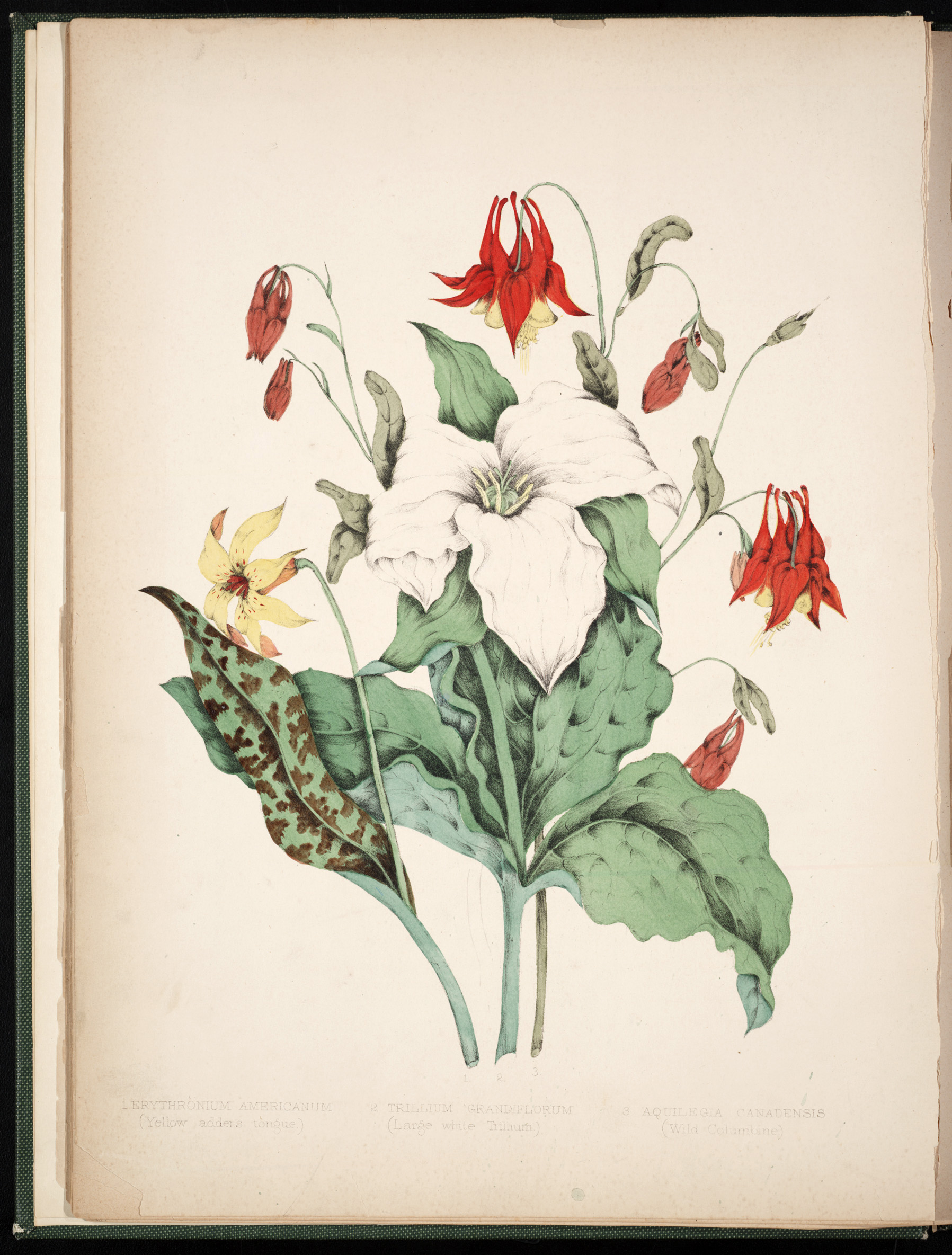 peoples. The earliest Canadian gardening books contained descriptions and illustrations of plants found in the New World; one of the most famous and well-loved publications was by writer-settler Catharine Parr Traill. Her classic book, Canadian Wild Flowers, first published in 1868, is the subject of a case study on this website. 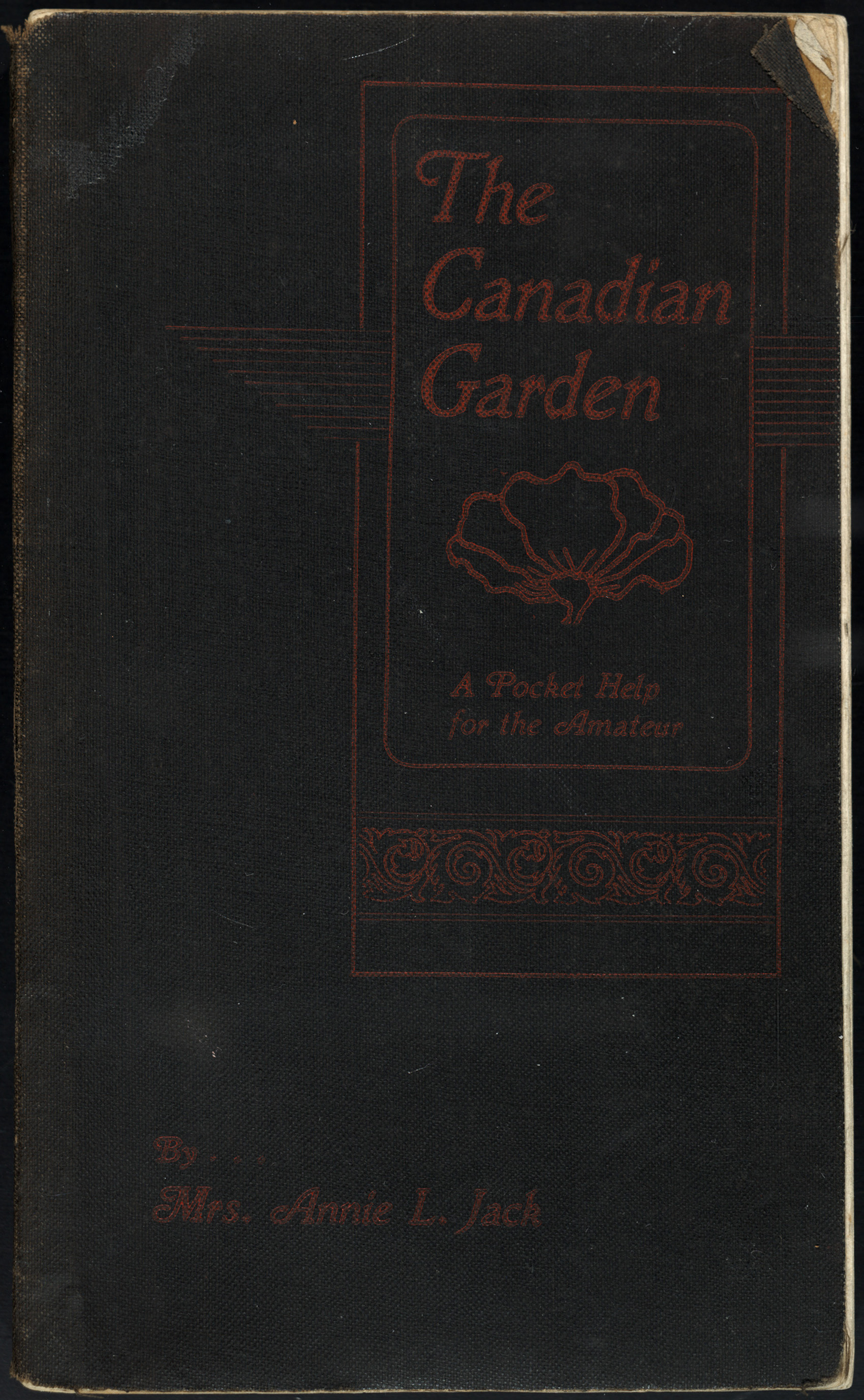 Women in the nineteenth century wrote gardening books while situated in their traditional domain – the home, including the family’s gardens. By the end of the century Canada had its first professional woman garden writer, Annie Jack (1839-1912), whose practical advice as a Montreal garden columnist resulted in the publication of The Canadian Garden: A Pocket Help for the Amateur (Briggs, 1903). Also memorable is Adele Austen, who grew up surrounded by gardens in the house now known as the Spadina Museum in Toronto. Writing under the name “Dorothy Perkins” (a popular hybrid rose at the time), she wrote The Canadian Garden Book, published by Allen in 1913. Several decades later, Lois Wilson’s Chatelaine’s Gardening Book became a national classic after its publication in 1970. Canadian gardening personality Art Drysdale writes on his website that it was “a Magnum opus, at least for that time in garden publishing, and it was truly all-Canadian!” 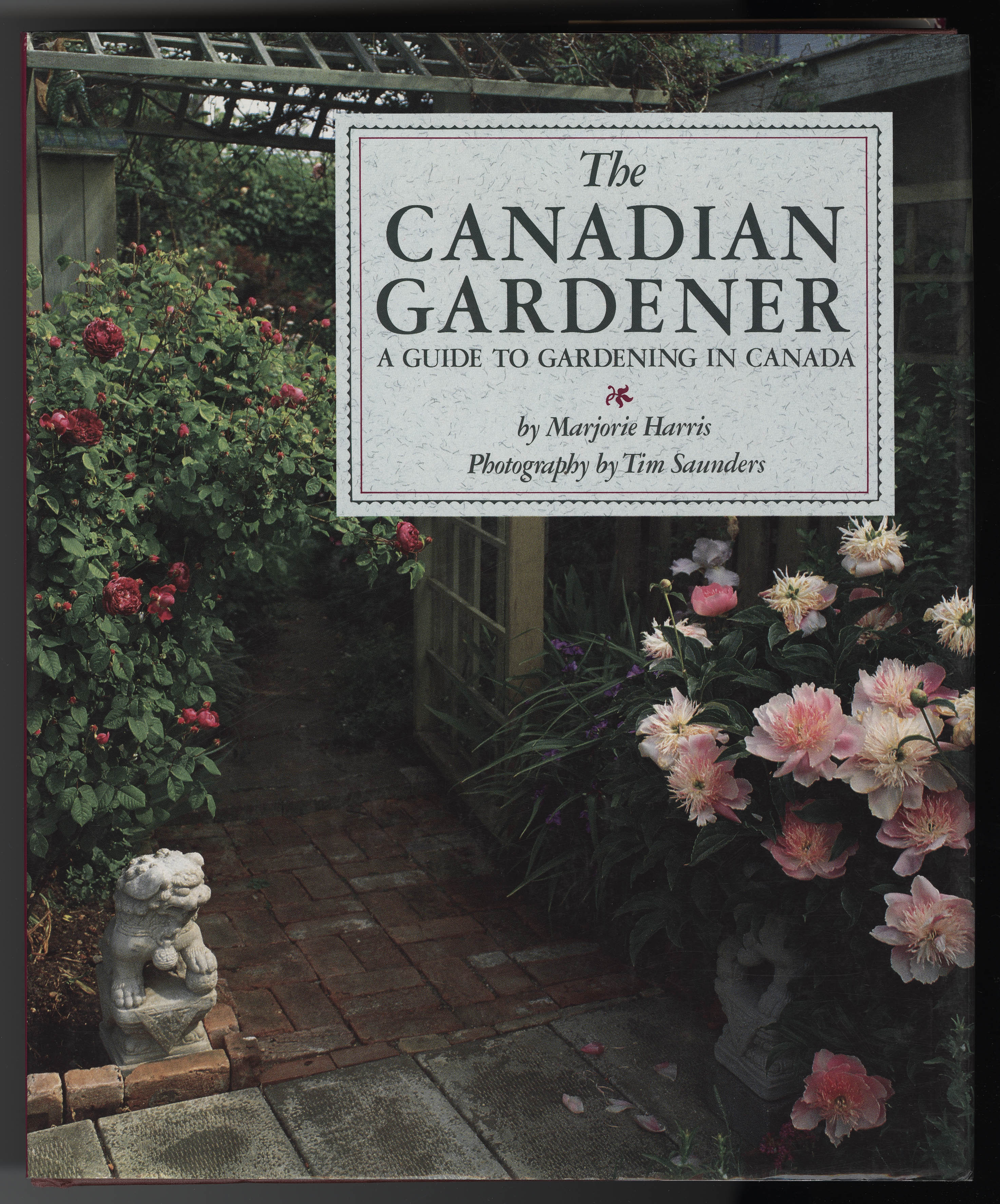 It is into this tradition that Marjorie Harris falls. Harris combines the traits of a passionate amateur with those of a professional writer in a way that has captivated Canadians and made her book The Canadian Gardener a longstanding favourite. Today, Marjorie Harris is considered one of the foremost gardening authorities and authors in Canada. However, her move to garden writing came mid-career. Until the late 1980s, Harris had been working as a journalist, writing articles on such topics as design, art, feminism, and politics – but not gardening.

Born in Saskatchewan in 1937, Harris attended McMaster University, graduating with a degree in Honours English in 1959. In addition to writing for 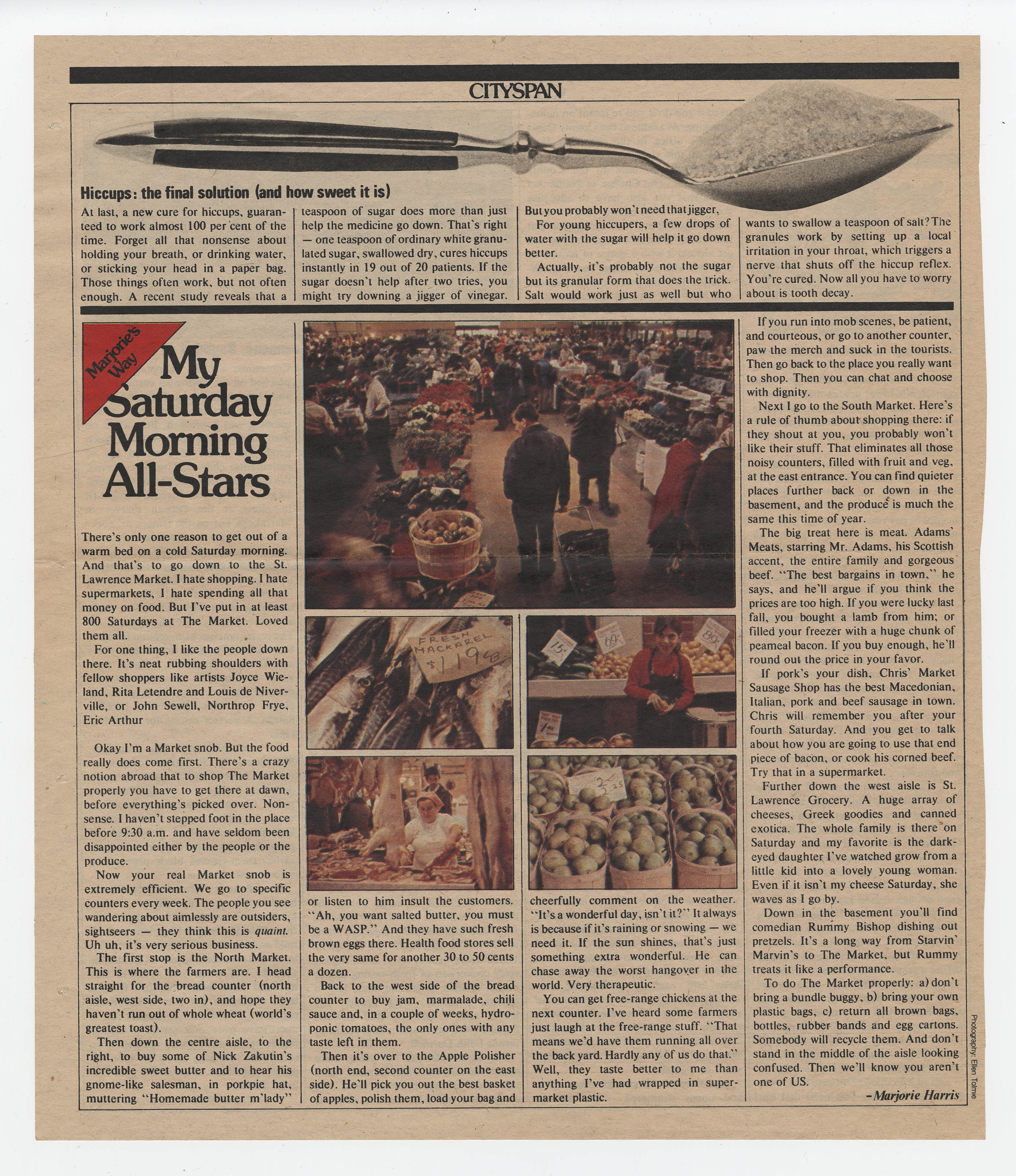 Maclean’s, Chatelaine, the Toronto Star, the Canadian magazine, and other publications, in the early 1970s she also worked as a writer and producer for CBC Radio. She had also completed several books, including Farewell to the 70’s: A Canadian Salute to a Confusing Decade (1979), co-edited with publisher Anna Porter; Toronto: The City of Neighbourhoods (1984); and Everyday Law: A Survival Guide for Canadians (1987) with her husband, writer Jack Batten.

The year 1988 proved to be a turning point in Harris’s career. She had become obsessed with gardening in 1986: “I was approaching fifty, the kids were gone, and I wanted to change my life,” she has said. Harris had revamped her garden 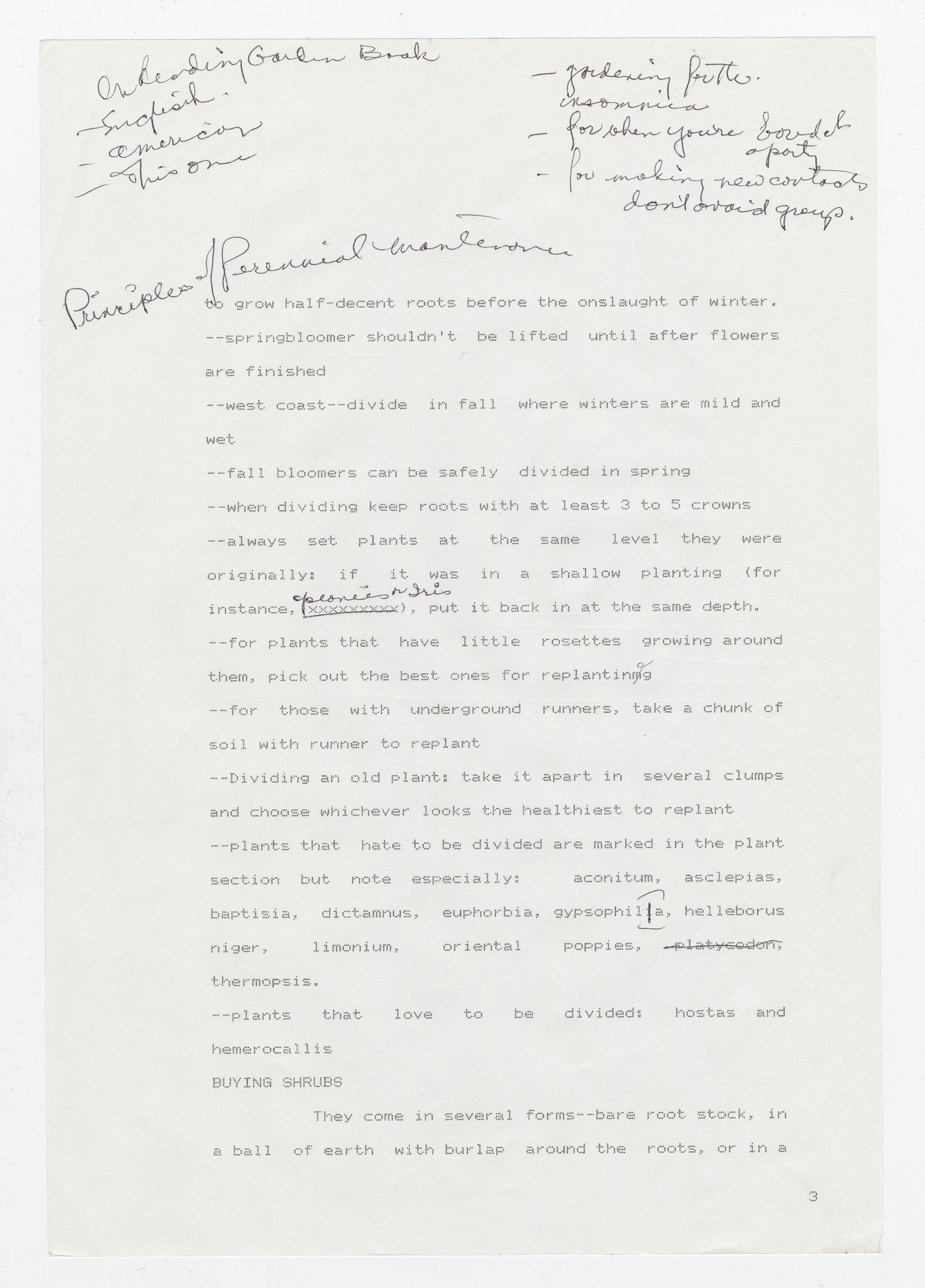 (at her home in the Annex area of Toronto), and did so much research in the process that by early 1988 she was writing gardening articles for Toronto Life, Chatelaine, and major Canadian newspapers. Around the same time, she decided to write a book about gardening.

Harris recognized that she was a journalist rather than a professional horticulturalist, and felt that there was a market for a well-written book for amateur gardeners. She began corresponding with friends and contacts (including fellow gardener Linda McKnight of Macmillan of Canada), sharing her strong vision for a unique book dealing directly with conditions faced by gardeners throughout Canada. In her proposal she wrote: “the team working 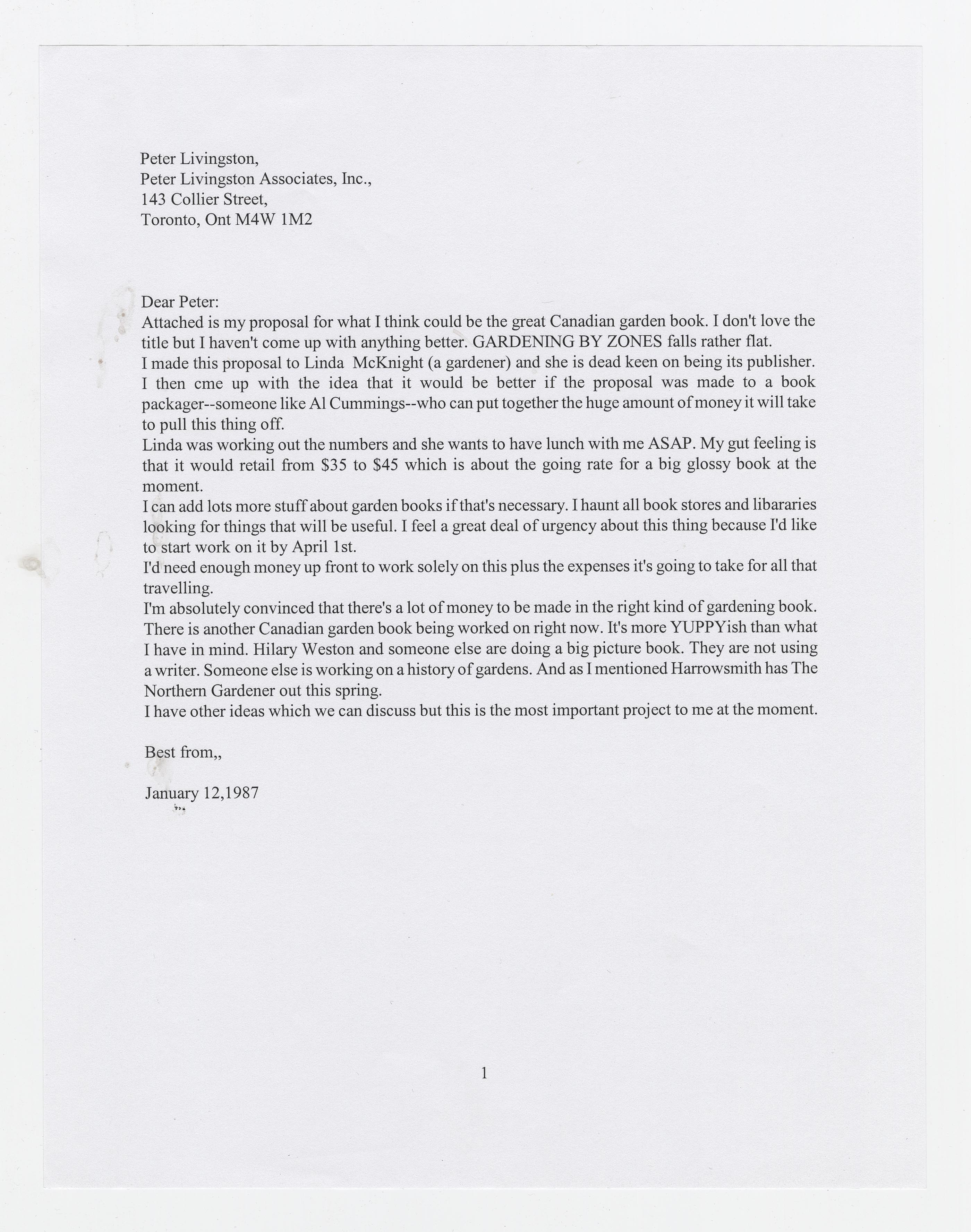 on the book should be gardeners. I’d love to work with…Tim Saunders who is a magnificent photographer as well as being a crazed obsessive gardener”. When McKnight referred Harris to Ed Carson, who had launched an original trade publishing program at Random House of Canada, Carson enthusiastically accepted the book proposal and commissioned Saunders to work with Harris. The pair travelled across the country photographing unique public and private gardens and interviewing the owners.

Harris carried on a regular correspondence with Carson. In their letters, they considered titles for the book: “The Great Canadian Garden Book”, “The Northern Zones Garden Book”, and “Northern Splendor” were suggested. They also considered subtitles like “Gardening in your Microclimate” and “The Urban Gardener”. The latter was vetoed by a friend of Harris’s, who objected that “since she doesn’t live in the city or even in a largish town, she felt it was a book she might have passed over”. It was not until 1990, the year of the book’s publication, that “The Canadian Gardener” was chosen. 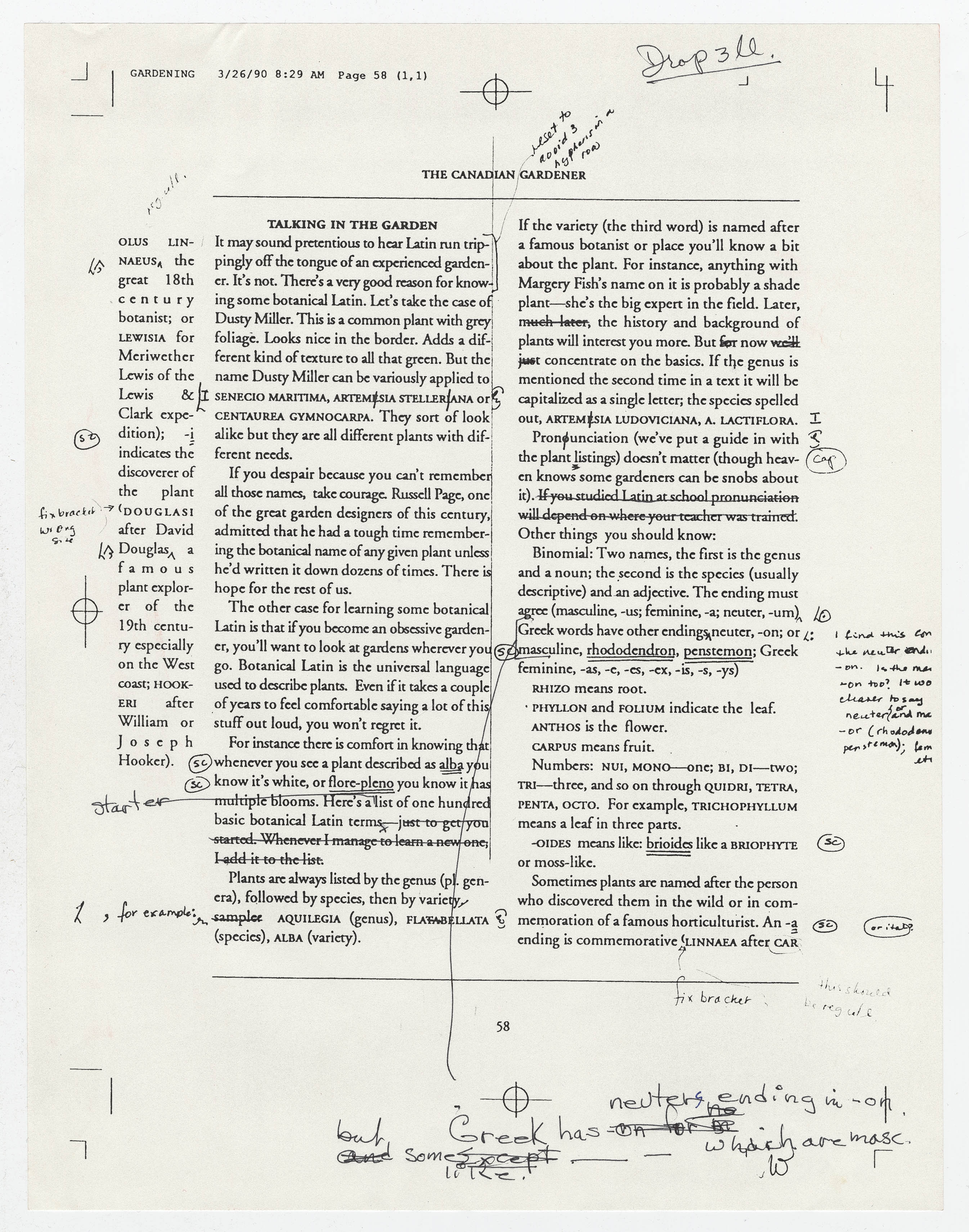 In addition to photographs and interviews, Harris conducted detailed research. She was particularly interested in publications issued by the federal and provincial governments, horticultural societies, and botanical gardens regarding soil, climatic conditions, and the flora of particular areas. The challenge of performing this kind of comprehensive research on Canadian gardening is illustrated in this response from Agriculture Canada: “I regret that Agriculture Canada no longer puts out any publications for the home gardener…Also there is now NO research in Ottawa on matters horticultural. On a more positive note, I enclose a photocopy of an out-of-print publication on Composting”. Despite this discouraging letter, Harris did consult many (often older) publications from Agriculture Canada and other provincial government bodies. 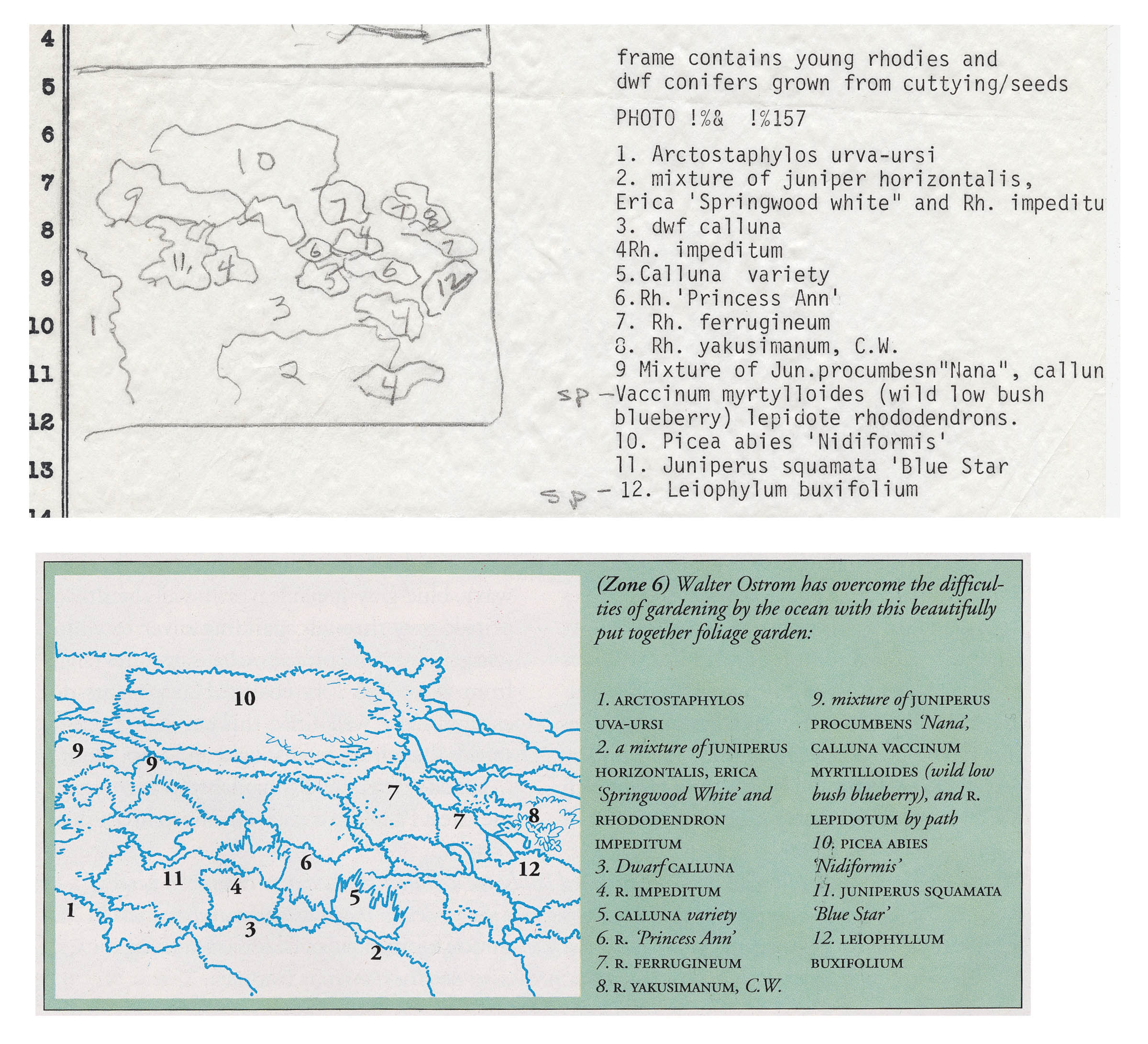 One of the unique challenges of publishing a gardening book is the need for accurate identification of the photographed plants. Each garden owner was sent copies of photographs of their garden, with a request for definitive plant identifications. Letters and transparencies with Latin and common names scrawled upon them, were returned for Harris to reconcile with her notes; this was one of the last phases of the preparation of the book.

The Canadian Gardener appeared in October 1990, with an initial print run of 30,000. A promotional tour was launched in time for the holidays, and the book was widely reviewed. Margaret Sharp of the Calgary Herald complained that “only a few prairie gardens made the pages” - this seems to have been primarily a result of unfortunate timing of the photography tour – the group arrived in Calgary in May, a little too early to capture the gardens at their best. Overall, however, reviews were extremely positive, and the timing was certainly superb: as Ron Graham noted in a Toronto Life profile of Harris,“the [book’s] publication...coincided with the gardening craze that was just on the verge of sweeping North America.” 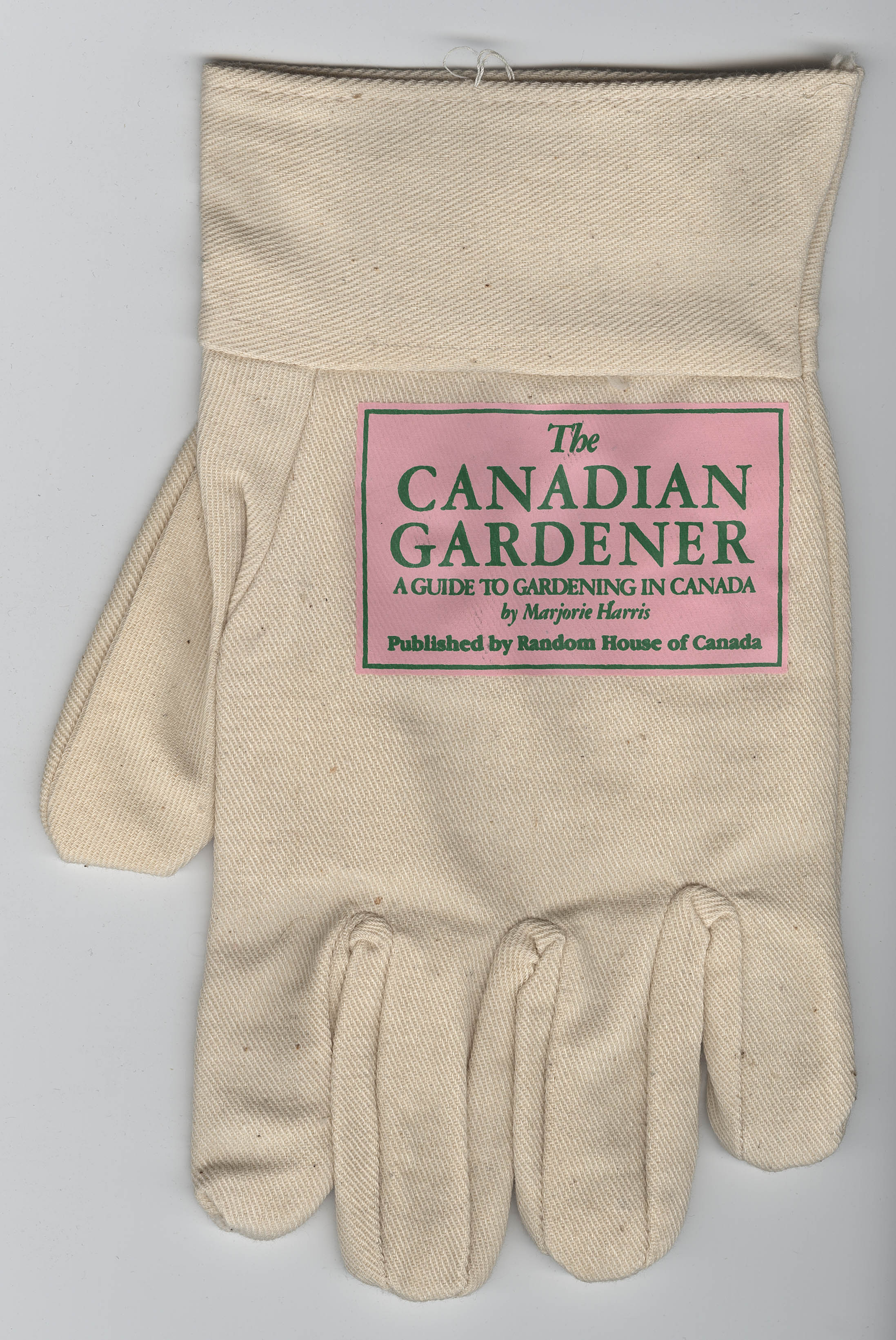 Since the success of The Canadian Gardener, Marjorie Harris has written nearly 20 additional gardening books, published most recently by HarperCollins. She writes regularly for the Globe and Mail, was editor-in-chief of Gardening Life magazine, maintains an informative and colourful website, and is a mainstay of popular radio and television programs and online forums. Other women writers have also become specialists in the field, including Lois Hole (now deceased), Lorraine Johnson, Judith Adam, Liz Primeau, Sonia Day, and Julie Boudreau. Harris’s name has become synonymous with Canadian gardening; through her many publications she has brought knowledge and pleasure to gardeners across the country, while nurturing the tradition begun by Catharine Parr Traill.