In their annual notice to subscribers of Barbarian Press’ Endgrain Editions in 2006, Crispin and Jan Elsted tell a story of a young man – “his manner full of despair” – querying the Elsteds as to why they bothered to continue making books, particularly “when no one cares about anything anymore.” The question was even more acute since the Elsteds are not your typical book makers. They are a throwback: eschewing current methods of book making – using computers for every step of production, for example – they instead produce, out of their farmhouse in Mission, B.C., some of the finest handcrafted, letter pressed works in the world.

Their response to the despairing youth about why they continue the difficult – and non-lucrative – work? Simple, they write: “History, even one’s personal history, shows that everything is redeemable, and to give up is to confess one’s choice to ignore that clearest of all human facts. Despair, in any case, is a luxury of the young, and we are now of a Certain Age. So we go on.”

And on they go. The Elsteds began their private press in 1977 in Kent, England, 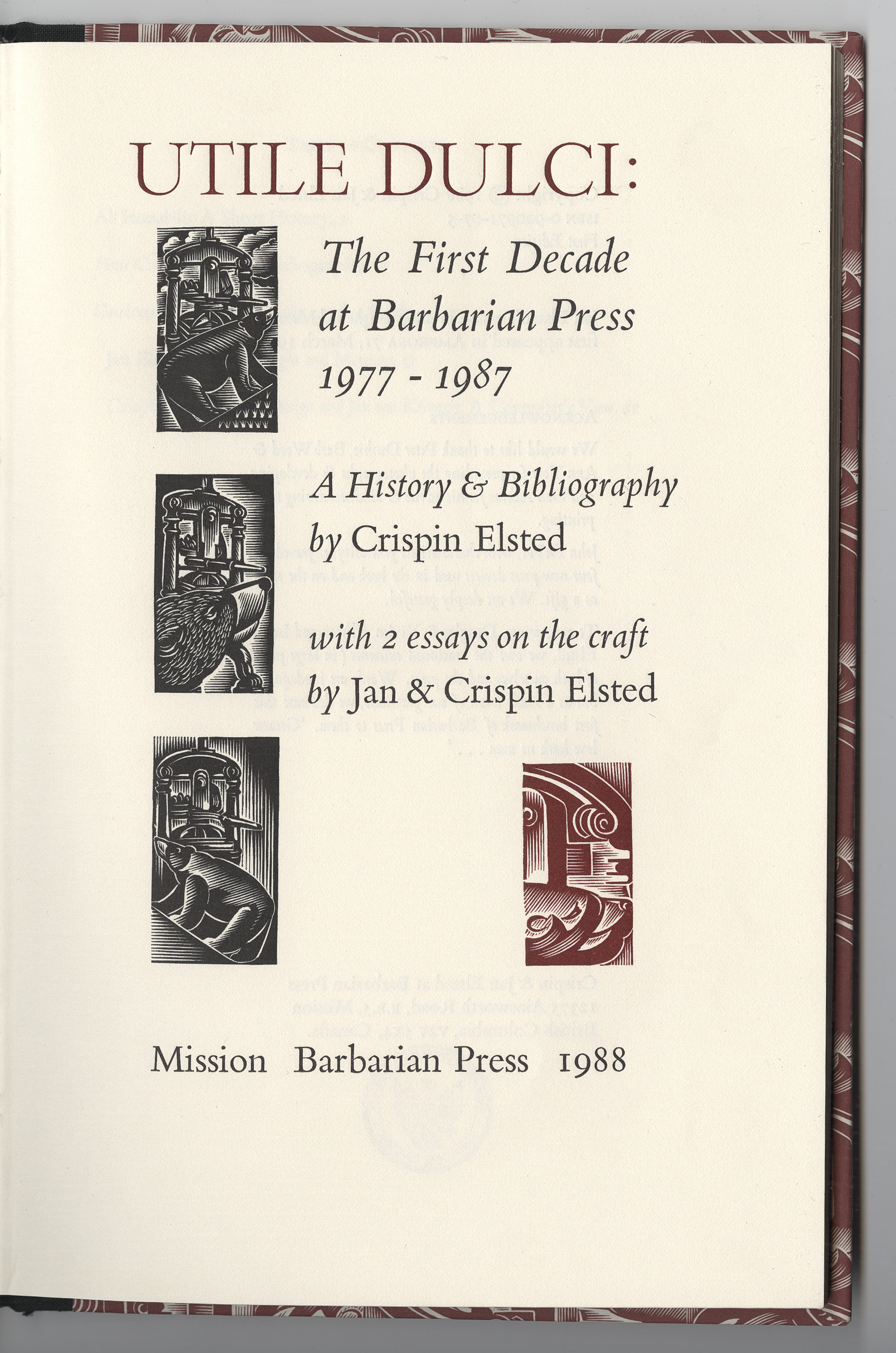 when they acquired three flatbed hand presses. Together with many cases of type, they returned to their native Canada the following year and set up shop in Mission, about eighty kilometres outside of Vancouver. They are part of a vibrant movement of publishers dedicated to the art of fine press printing. In fact, Barbarian is doing its bit to ensure continued growth of hand press printing: under the auspices of the Canadian Bookbinders and Book Artists Guild, it offers intensive workshops at the press, introducing participants to the basics of letterpress design and printing. Several of the participants have gone on to set up their own presses, or develop into binders or papermakers. 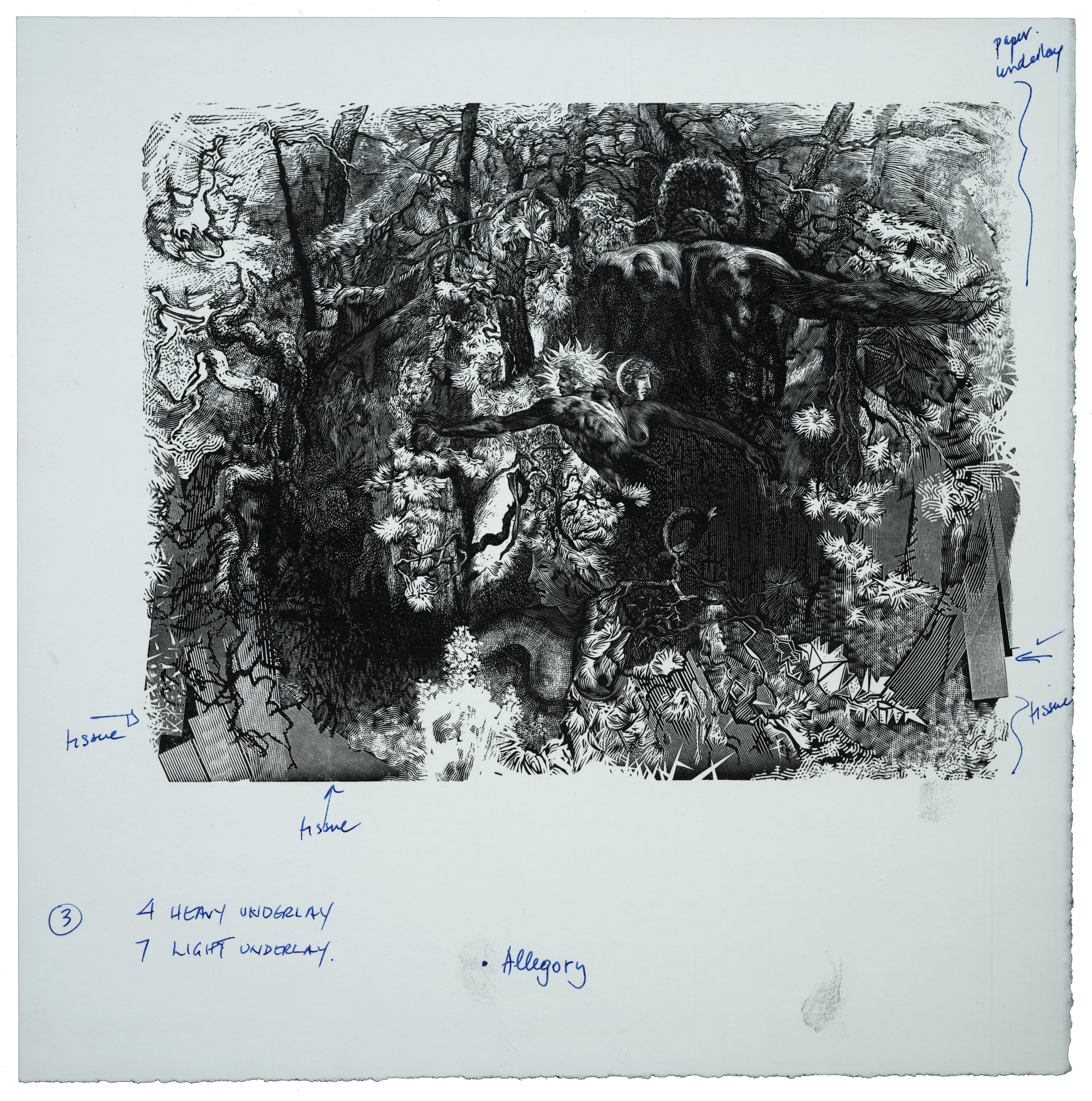 While publication decisions and editing are shared by the proprietors of Barbarian Press, design and typesetting are generally done by Crispin Elsted, and the presswork by Jan Elsted. The Press has produced approximately forty books under the Barbarian imprint, most of which, prized by serious book collectors, have sold out and are no longer in print. Barbarian press maintains an active subscription list, and many of its sales are to long-time customers. Barbarian books are displayed and sold at the various fine book fairs in North America. As well, it maintains an active web site where it also sells its books. The press’ publications range from new translations of poetry and prose, Victorian melodrama, and new poetry to bibliography, illustrated classics, and books on wood engraving.

While all its books are examples of the highest craftsmanship, works on wood engraving have 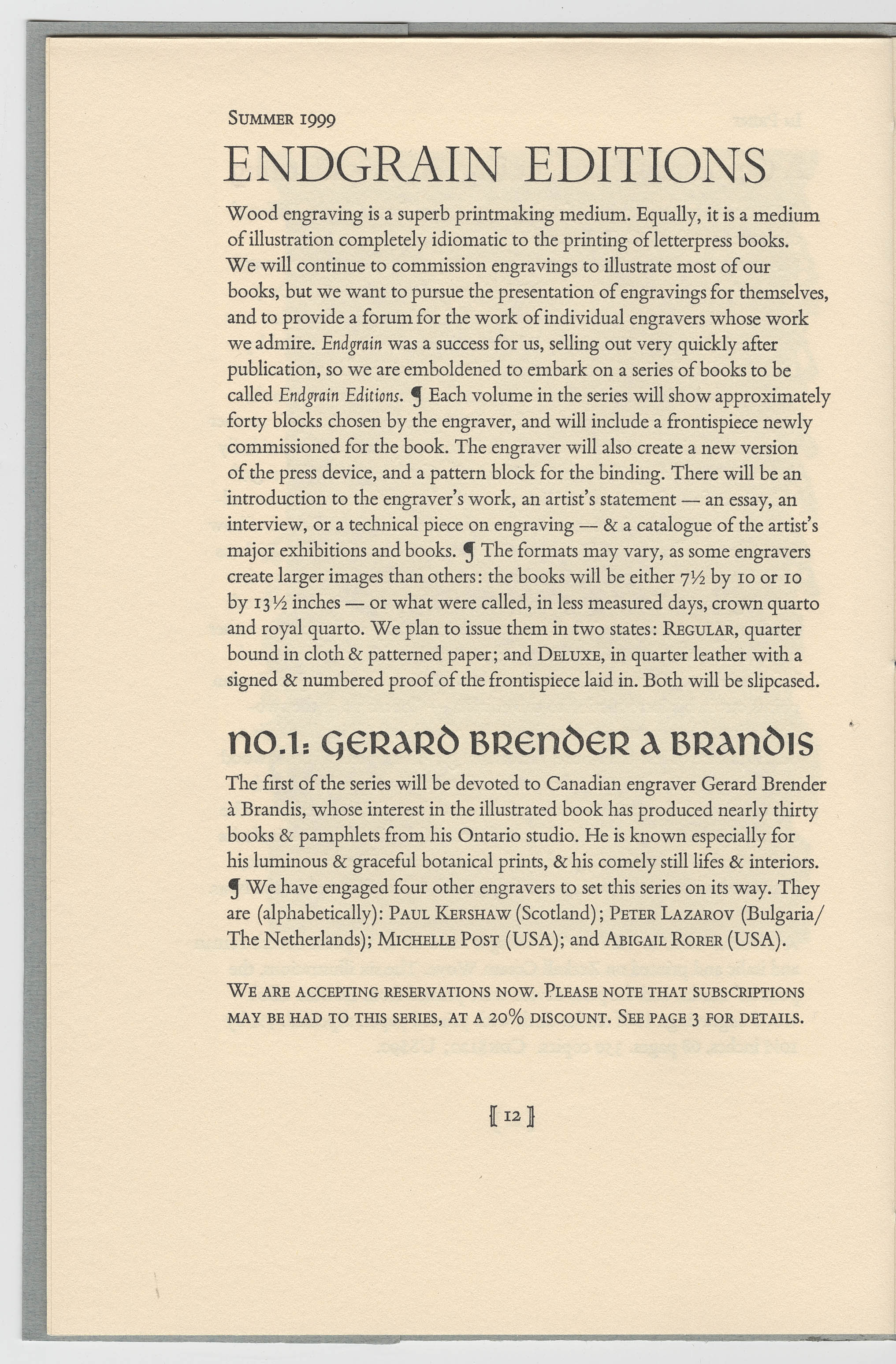 become a particular specialty since the publication in 1995 of Endgrain: Contemporary Wood Engraving in North America. The book, now out of print (and a highly sought-after commodity), was greeted with considerable acclaim upon its release. Its success spawned an ongoing series of books called Endgrain Editions, each of which showcases the work of a single engraver. The Elsteds print from the original blocks, and include an introduction written by the artist and a catalogue of the artist’s major works. The first Endgrain Edition, published in 2000, featured Canadian engraver Gerard Brender à Brandis, while the second highlighted Abigail Rorer, who is active as an illustrator as well as a wood engraver in the United States.

The third and most recent volume in the series features Peter Lazarov, a Bulgarian who defected to the Netherlands in 1991. Trained in the classical tradition, his engravings exhibit an immaculate and detailed craftsmanship. His approach is diverse: a master of printing techniques using wood engraving, woodcuts and 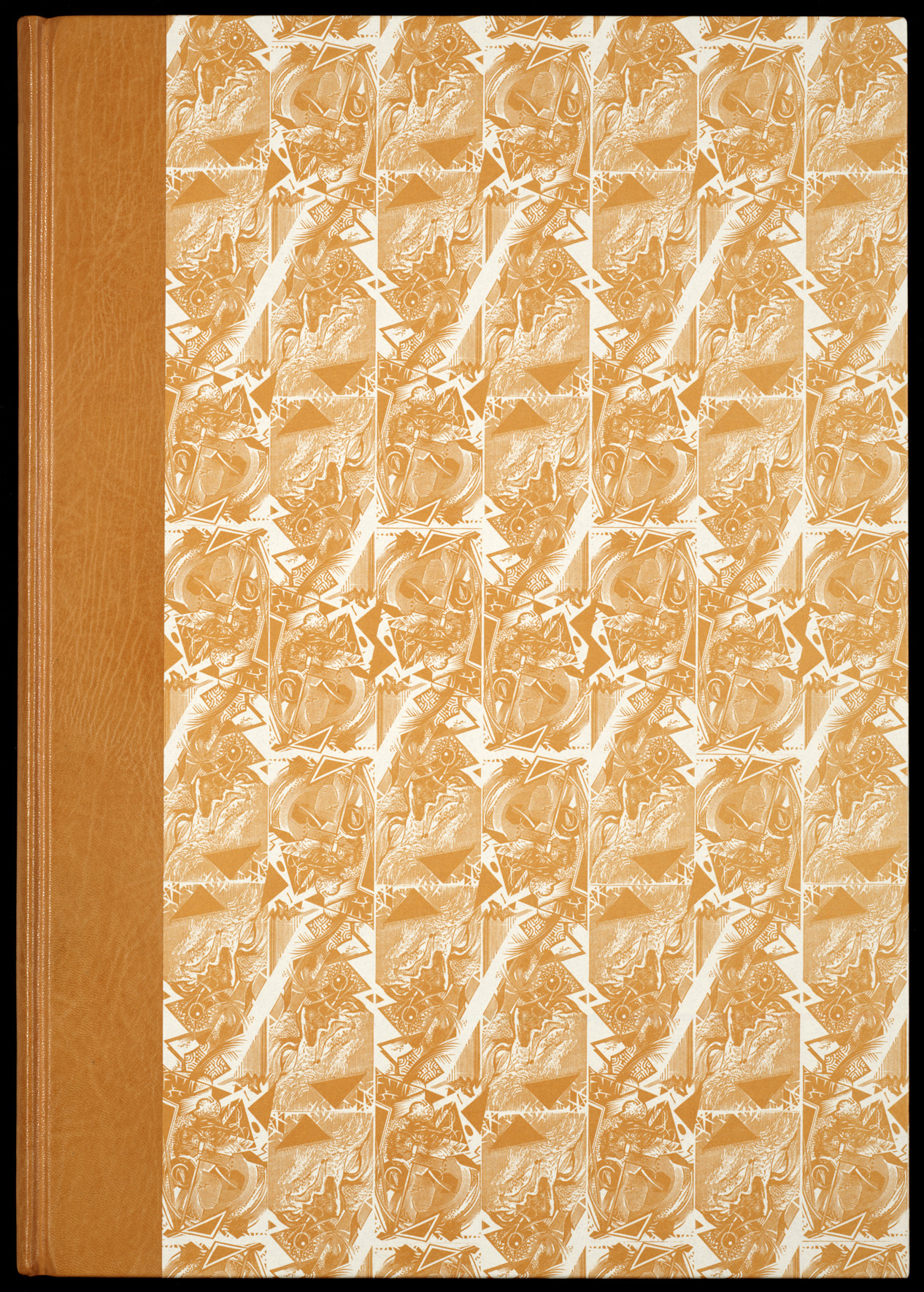 lithography – sometimes combined into one print – Lazarov’s engravings range from realist pastoral scenes to semi-abstract and neo-expressionist works. Endgrain Editions 3: Peter Lazarov, published in 2003, containing approximately fifty printed engravings, is arguably the most striking of the three yet produced. (It too is also out of print.) For one, it was the first Endgrain Edition to be printed in a larger format, measuring 15 x 10 ½ inches. The 132-page book was issued in two editions, deluxe and regular. The deluxe, produced in an edition of sixty copies, was hand set in Joanna roman and italic type on Zerkall Cream Rough Wove and Book White Wove papers, and hand bound (by Simone Mynen) in quarter sienna leather with patterned paper over boards, gold-stamped leather label on spine, with a signed and numbered proof of the frontispiece in a handmade paper folder. The regular edition – 150 copies – was bound by Rasmussen Bindery in Sienna cloth and patterned paper, with a printed label on the spine. 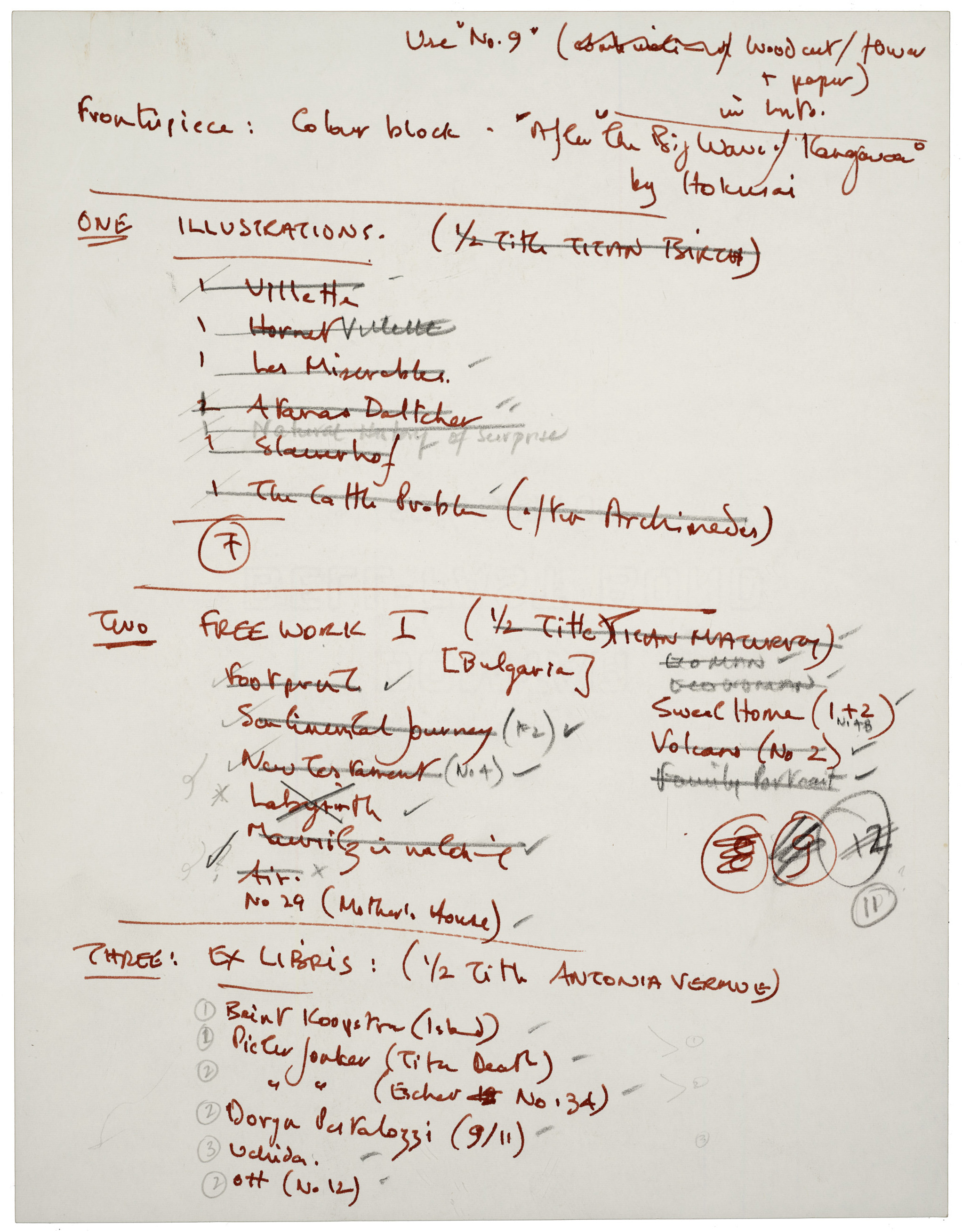 The production process for the book – from Crispin Elsted’s initial contact with Lazarov, via old-fashioned post in March 1998, to the final product that eventually rolled off the press – is well documented in the Barbarian Press archives held at the Thomas Fisher Rare Book Library (MS Coll 00464). It’s a fascinating window into the detailed, difficult, and careful methods employed by the Elsteds in producing magnificent books. The lengthy and breezy correspondence between Elsted and Lazarov, in particular, reveals both the depth and breadth of the project – and the many changes it would undergo before final production, several years later than originally scheduled. (Crispin Elsted’s initial plan was to complete the book for publication in the summer of 2000; it was eventually published in the summer of 2003.) The letters contain detailed discussions about the art and craft of wood engraving, about printing, about the development of Lazarov’s technique and the logistics of travelling to Mission with the blocks. The correspondence chronicles a business relationship that morphs into a personal one. 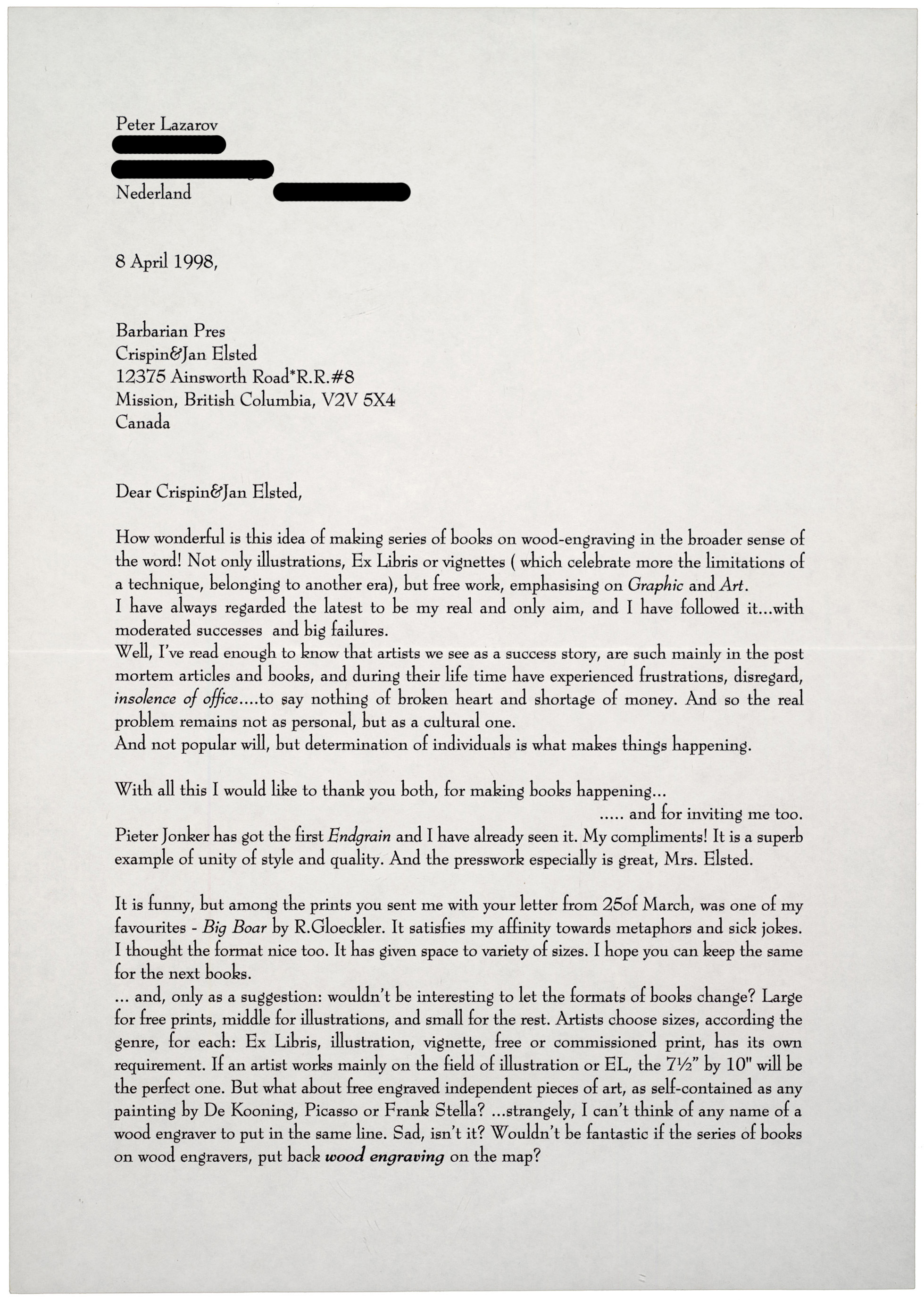 In his first response to Crispin Elsted’s correspondence outlining the nuts-and-bolts of the project, Lazarov doesn’t hide his enthusiasm, and establishes the general tone of their subsequent correspondence:

“How wonderful is this idea of making series of books on wood-engraving in the broader sense of the word! Not only illustrations, Ex Libris or vignettes (which celebrate more the limitations of a technique, belong to another era), but free work, emphasizing on Graphic and Art. I have always regarded the latest to be my real and only aim, and I have followed it … with moderated successes and big failures.”

Elsted’s three-page reply furthers the discussion on the objectives, techniques, and art of wood engraving. The relationship is also developing to the extent where Elsted feels comfortable to raise points of difference between the two: “I want to respond to what you said by saying, first of all, that we accept your own hopes and aspirations for wood engraving without accepting all your reasons. It seems to us that wood engraving is an ideal medium for illustration in letterpress books like those we publish, because the technique is idiomatically suited to type and ink on a book page. However that doesn’t mean that we think wood engraving should always be (in your words) ‘small’, ‘fine’ or ‘decorative’, or that it shouldn’t also be used for prints, separate works of art which are not linked to a text, abstract images, and so on.” Yet, he too is optimistic about the working relationship ripening “into a friendship, as time goes on.”

Also of interest are the illustrative prints made of Lazarov’s engravings, as well as the proof sheets, enabling one to observe how books of this nature, particularly with such detailed wood engravings, come to fruition. It illustrates both the art and craft behind the Elsteds’s creations.

Even at the dawn of a new era – specifically the advent of the e-book - Barbarian Press soldiers on, with no obvious signs of despair. The press continues to be active, and is, in 2009, in the final stages of finishing its most ambitious project: an edition of Shakespeare’s romance Pericles, illustrated by Simon Brett, which has consumed more than five years of labour. The beleaguered book seems to be in good hands.