Subscription publishing is a method of bookselling in which publishers, authors, and book agents used advertisements, sample books, and other promotional materials, to solicit subscribers in advance of publication, to avoid financial loss. A well-known example is Canadian Wild Flowers (Montreal, 1868), for which Agnes Fitzgibbon enlisted 400 subscribers. From c. 1870 to 1910, companies used various persuasive techniques to enlist book agents, and subscription publishing flourished in Canada. Bradley-Garretson, of Brantford and Toronto, Ontario, was one such publisher, and purported to have “two to three thousand” agents working across Canada in the mid-1880s.

Subscription publishing was present in Canada as early as the mid-eighteenth century when Quebec residents were invited to subscribe to a new newspaper, the Quebec Gazette / La Gazette de Québec. Over a century later, the economic challenges of the 1870s and 1880s provided a particularly ideal environment for the expansion of subscription publishing, which achieved substantial reductions in costs through direct sales from publishers to readers, avoiding the “middleman” expense of selling to retailers at discounted prices. 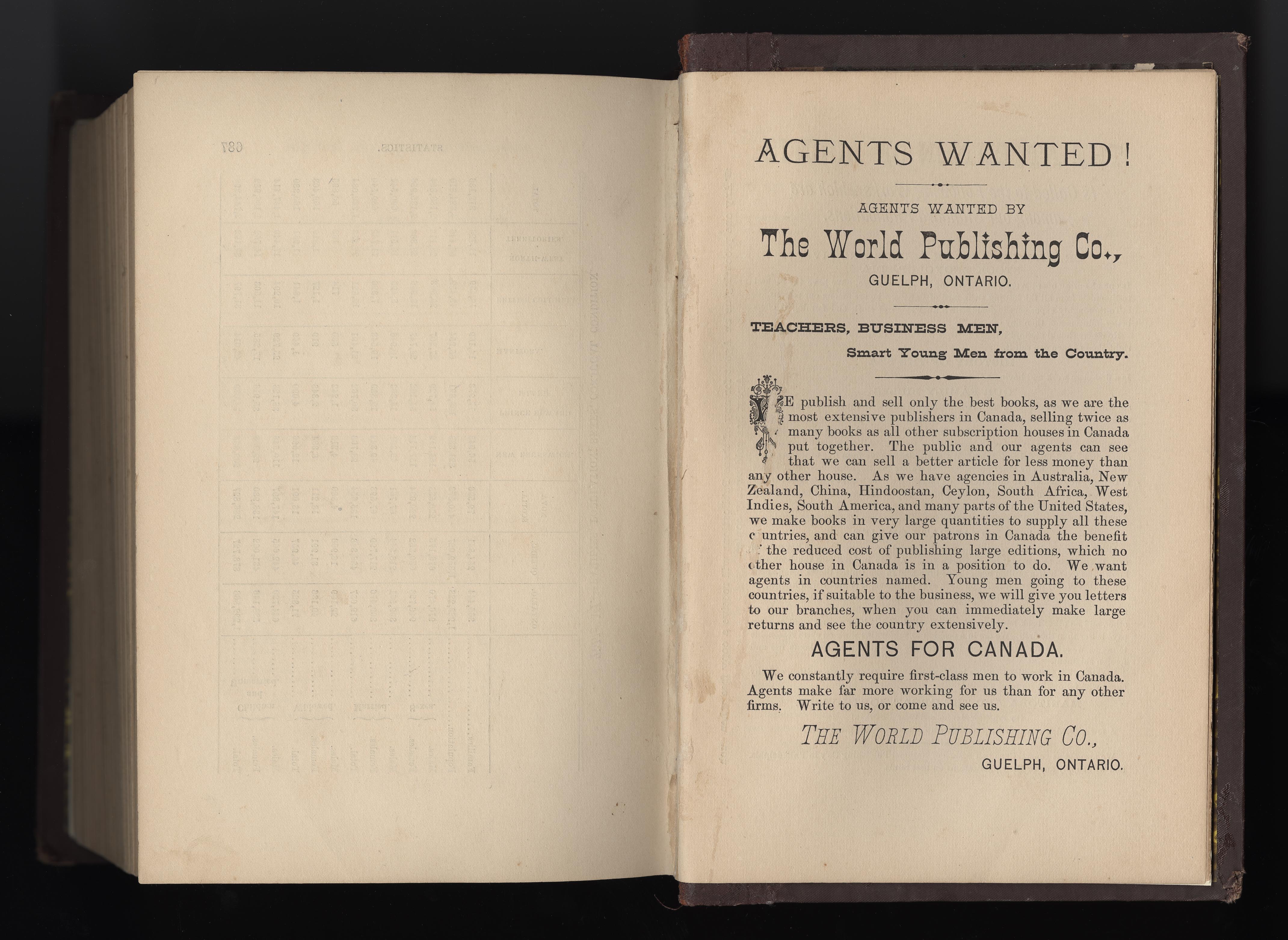 During this period, as George L. Parker observes, “subscription publishing proved so profitable that nearly every major house in Montreal and Toronto distributed some of its publications through agents.” Subscription firms based in the United States that had sold directly to Canadian customers by mail, began opening branch offices in Ontario and abroad at this time, sometimes using duplicate plates for printing locally to further reduce costs. Relationships between publishers were complex, and it was common for a single agent to represent many firms, as Teresa Nickels-Prilesnik noted in her study of the Ontario book agent, Tobias Schantz.

A notable subscription publishing firm was Bradley-Garretson, which had offices across the U.S. but operated primarily out of Philadelphia. According to a detailed business profile in Warner & Beer’s The History of Brant, Ontario (1883), the company’s Brantford office was established in 1876 under the directorship of D.R. Wilson. The profile measures the success of the firm by noting that it spent “no less than about three hundred dollars per month” on postage, which was estimated to be “near one-seventh of the mail business of the city.” The firm employed between fifteen and twenty “corresponding clerks” and other assistants. The Brantford office controlled all Canadian sales for Bradley-Garretson west of New Brunswick and, again according to the profile, purported to have “between two and three thousand” agents on its roster in 1882, “there being scarcely a city, a town, or township without a representative.” The History of Brant entry lauds the quality of 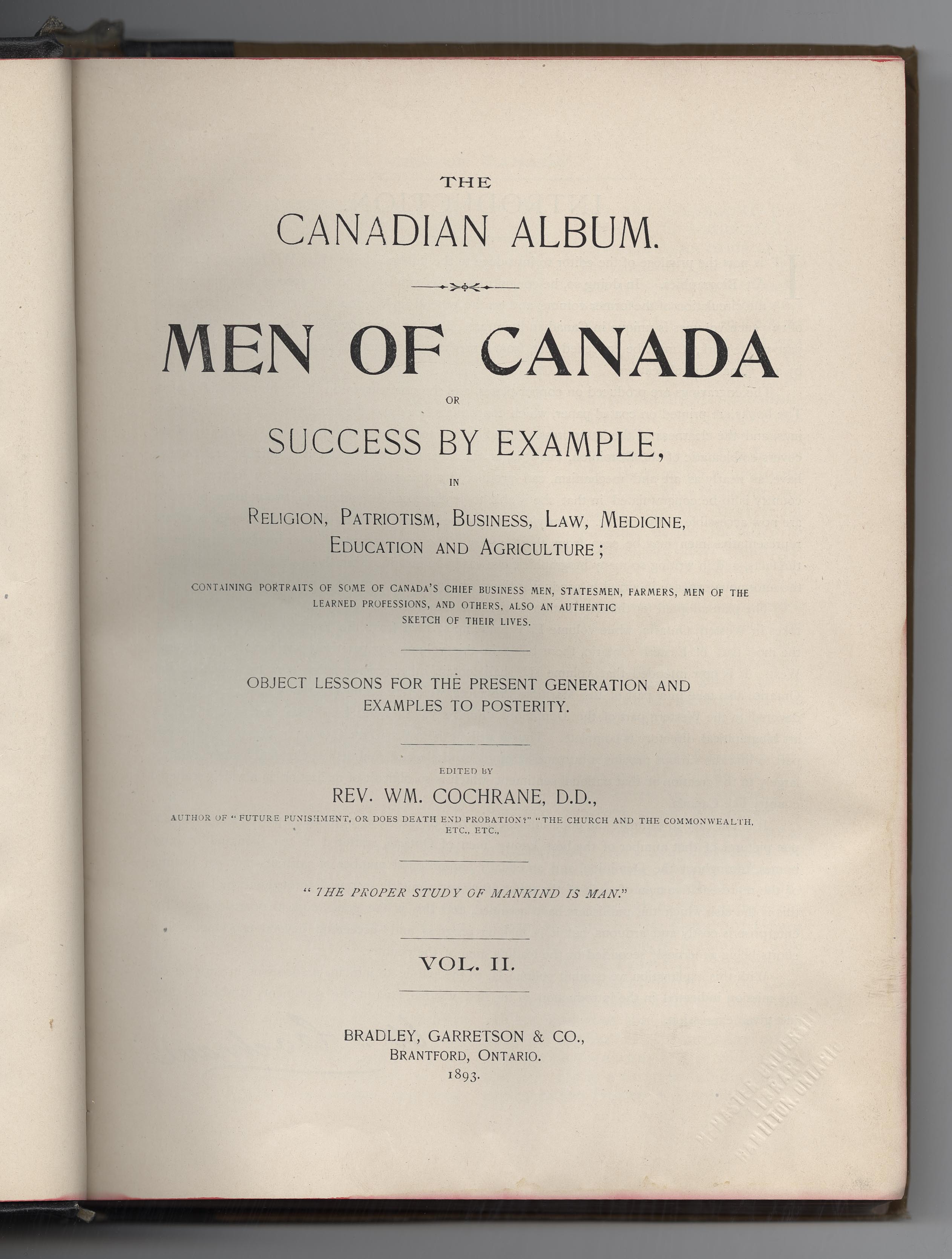 material published by the firm, deeming it “all of a high class character” designed to do “great work for the moral and religious education of the people.” Indeed, on its letterhead and imprint, Bradley-Garretson billed itself as “The Book and Bible House,” although it also published household guides and cookbooks, including Julia MacNair Wright’s The Complete Home (1879) and Annie R. Gregory’s Canada’s Favourite Cook Books (1902), and children’s works (Laura Augusta Yerkes’s A New Speaker for Our Little Folks, c1902), and Men of Canada, published between 1891 and 1896.

By the time this profile was published, the Brantford office had been successfully managed for four years by the Rev. Thomas Samuel Linscott. 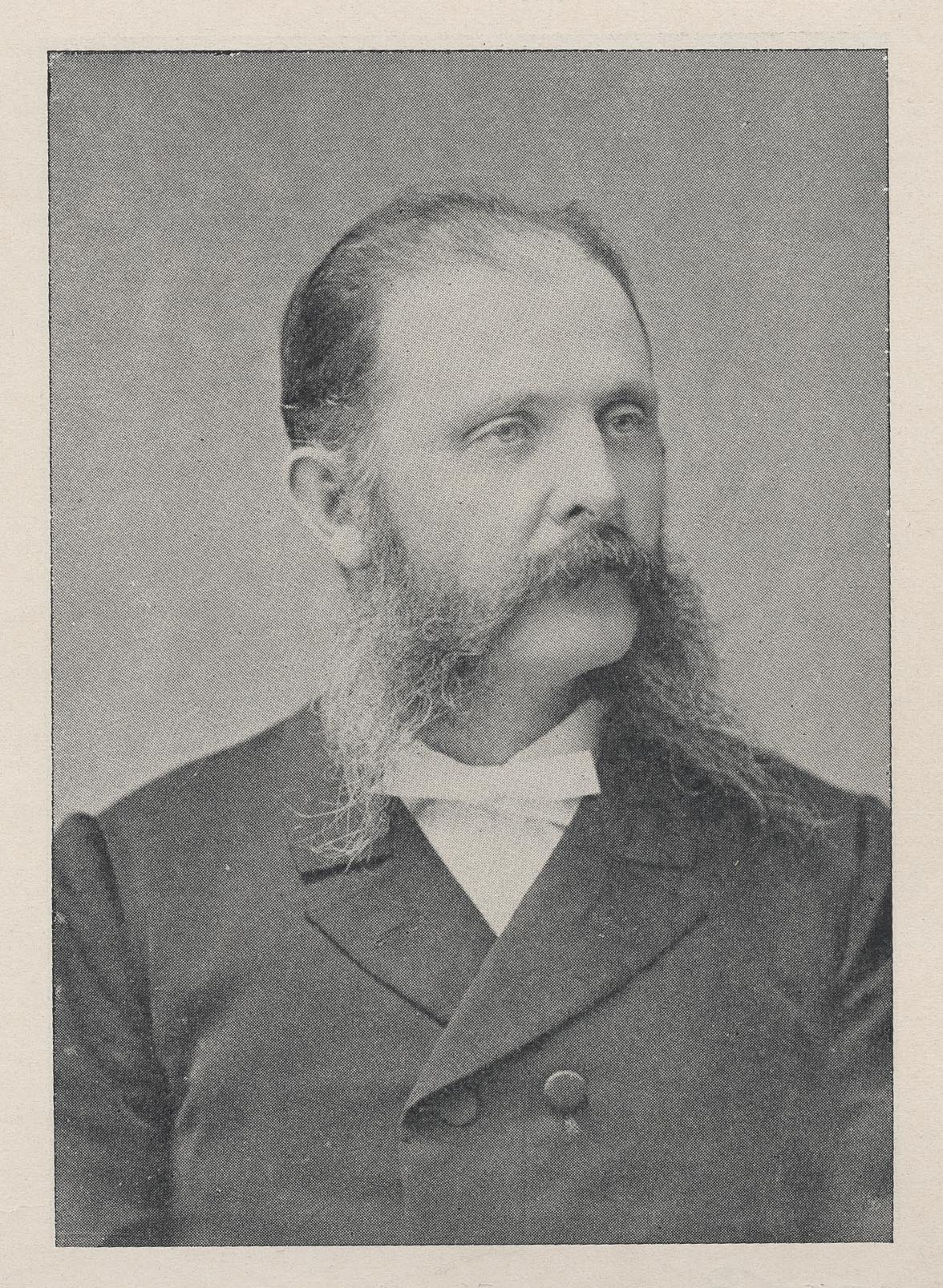 English-born Linscott had emigrated to America and worked in the company’s Philadelphia office before managing the Canadian branch. Ordained as a minister in 1875, he became a full-time publisher in 1879, but wrote numerous religious-themed books published by the company, including The Path of Wealth: or, Light from My Forge: A Discussion of God’s Money Laws (1888) and Fifty-two Weeks with God (1899).

The success of the company meant certain expansion. The History of Brant noted, with some chagrin: “The firm are thinking of manufacturing their books in Canada, and thus save large import duties. If they decide to do this, it will necessitate moving their head Canadian house to Toronto; still, it is intended to continue a branch house at Brantford.” In May 1895, Canadian Printer & Publisher reported that Bradley-Garretson Co. of Brantford was to be incorporated with a capital of $75,000, with Thomas Henry Linscott named as principal owner; by 1897 the firm had opened a

Diverse methods for recruiting agents and selling books were employed by the company. The Bradley-Garretson fonds at McMaster University, while small, paints a colourful picture of these activities. It includes a recruitment letter dated 15 May 1915, sent to one “Mr. Brown”, advising that the firm was looking for agents to sell and promote Bradley-Garretson publications, particularly the book "Billy Sunday”: The Man and His Message. The letter, accompanied by a poster with a caricature and photographs of Billy Sunday, a baseball player turned Evangelist, in dramatic poses, 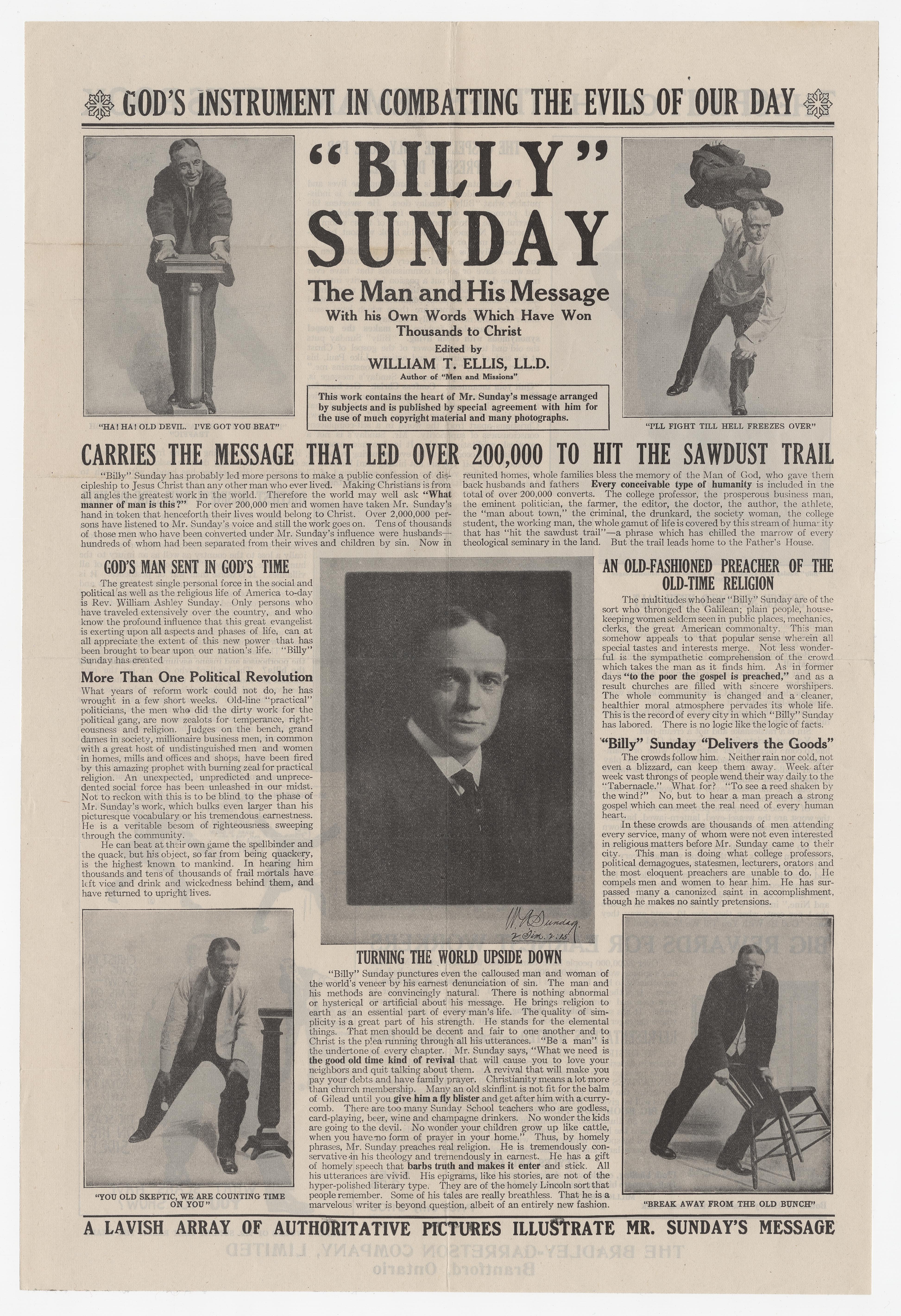 appealed not only to the recipient’s desire to make income from selling books, but also to his sense of moral duty, noting that the sale of such books was “soul-stirring work” undertaken for “the good of humanity.” The firm would happily accept part-time agents but the letter cautioned, in a most forceful way, that the offer was time-sensitive: “DO NOT DELAY. OPPORTUNITY WAITS FOR NO MAN. We shall expect to hear from you at once.”

In case the recipient was not won over by this forceful sales pitch, a publicity circular for another publication, The World's Greatest War by Thomas H. Russell, was included. The flyer asserted that “every Canadian orders this book as soon as he takes the 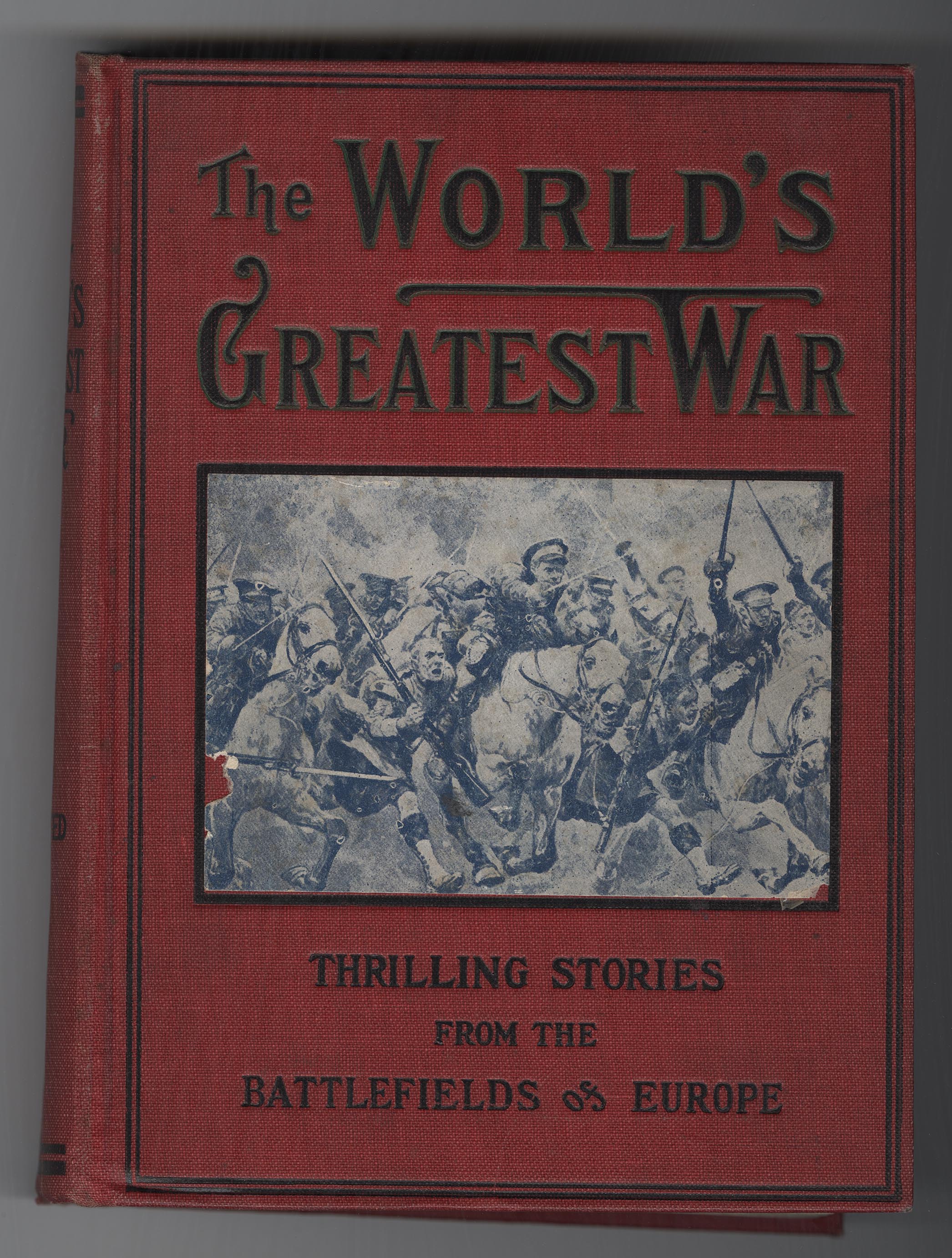 time to examine it, additionally warning buyers to “beware of books that are pro-German in their leanings.” Aside from accuracy and comprehensiveness, the book’s promotion focused on the “552 large and beautifully printed pages … beautifully bound and clearly printed on good paper” with illustrations that “are real works of art.”

Another circular promotes a publication detailing the sinking of the Lusitania , and, as with the previous examples, encourages prospective agents to obtain a free copy of the sample book by sending ten cents to cover the cost of mailing. Such sample books, also known as dummy books, provided clients with a

tangible sample of the proposed finished product which, in this case, Bradley-Garretson assured, would be "the most extraordinary seller of any book ever published.”

These interesting documents illustrate the means and schemes by which subscription publishers operated during that period, targeting individuals to act as agents, while using religious, moral, and patriotic sales pitches for recruitment, until their success waned in the early decades of the twentieth century. It is known that Bradley-Garretson published books until 1920: the operations of the company ceased shortly after the time of Thomas Samuel Linscott’s death in 1919.

While the heyday of subscription publishing in Canada is long since past, this form of bookselling continues to this day with many small presses, and fine press publishers such as British Columbia’s Barbarian Press, maintaining a subscription list for limited edition publications.

Brodie, Alexander H. “Subscription Publishing and the Booktrade in the Eighties: The Invasion of Ontario.” Studies in Canadian Literature/Etudes en literature canadienne (1977): 2.1.

Parker, George L. “The Evolution of Publishing in Canada.” In History of the Book in Canada, eds., Yvan Lamonde, Patricia Lockhart Fleming, and Fiona A. Black, 2: 17-32. Toronto : University of Toronto Press, 2005.