Best known for his role as chief librarian at Queen’s University, H. Pearson Gundy spent much of his career gathering information on the early publishing history of Canada, particularly that of Kingston, Ontario. This case study briefly summarizes Gundy’s career as a publishing historian and provides some examples of the stories that he uncovered.

H. Pearson Gundy (1905-94) first studied to be an English professor, receiving his bachelor’s and master’s degrees from the University of Toronto in 1928 and 1930 respectively. He then lectured on Restoration-era literature for fourteen years at McMaster University, Mount Allison University, and the University of Chicago. In the summer of 1944, Gundy attended a summer course at Columbia University’s library school that piqued his interest in printing and 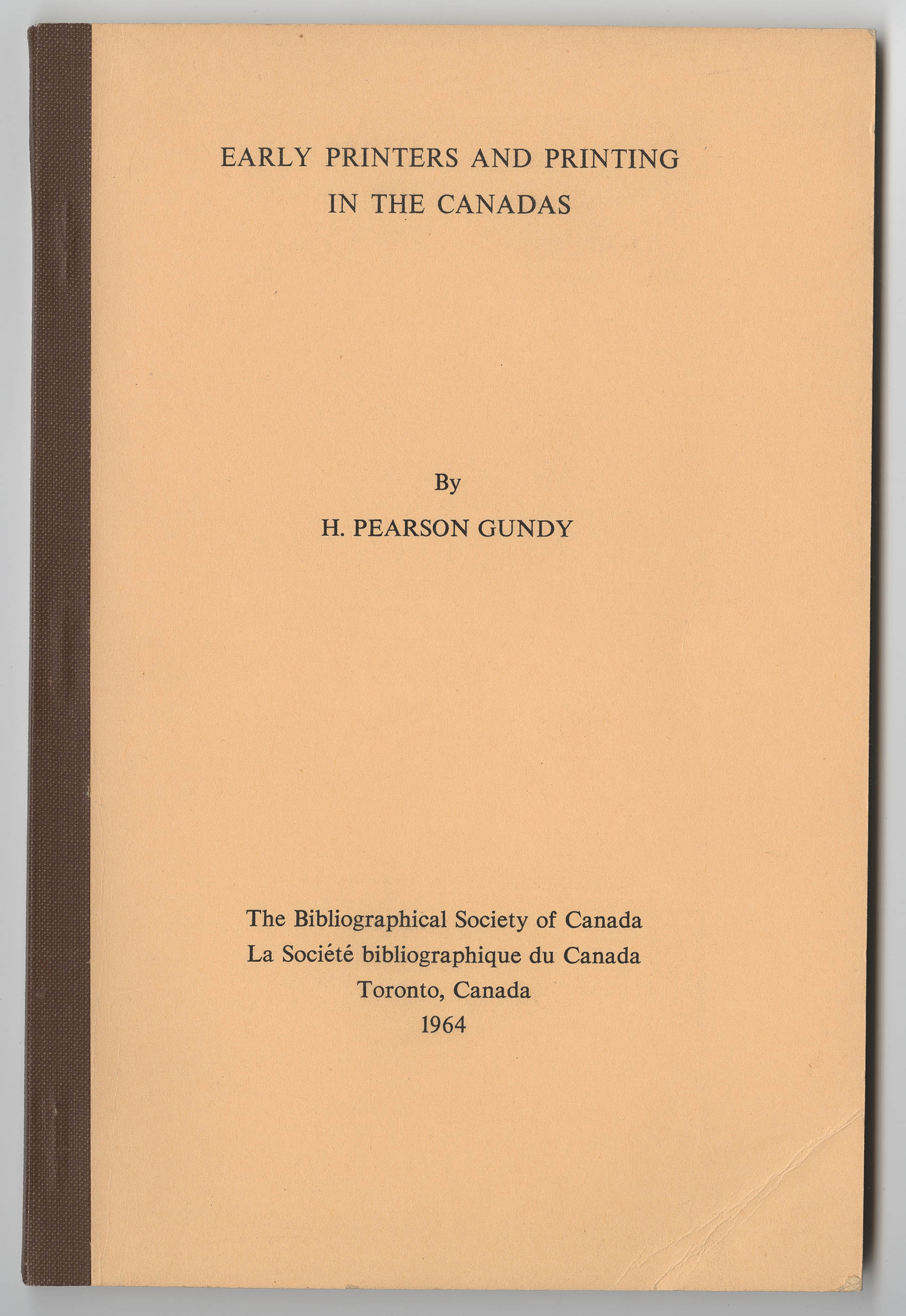 publishing as well as library science, and soon thereafter he became Mount Allison’s chief librarian. Three years later, Gundy accepted an offer from Queen’s University to take charge of their library and remained in this post for eighteen years, during which time his passion for Canadian publishing history took full hold and resulted in many written works on the subject, including Early Printers and Printing in the Canadas (1957), and Book Publishing and Publishers in Canada before 1900 (1965), both published by the Biographical Society of Canada (Toronto). After his “retirement” in 1965, Gundy remained at Queen’s as an English professor, and was the editor of Queen’s Quarterly (1967-1972), and also served briefly as associate director of McGill-Queen’s University Press (1970-71). 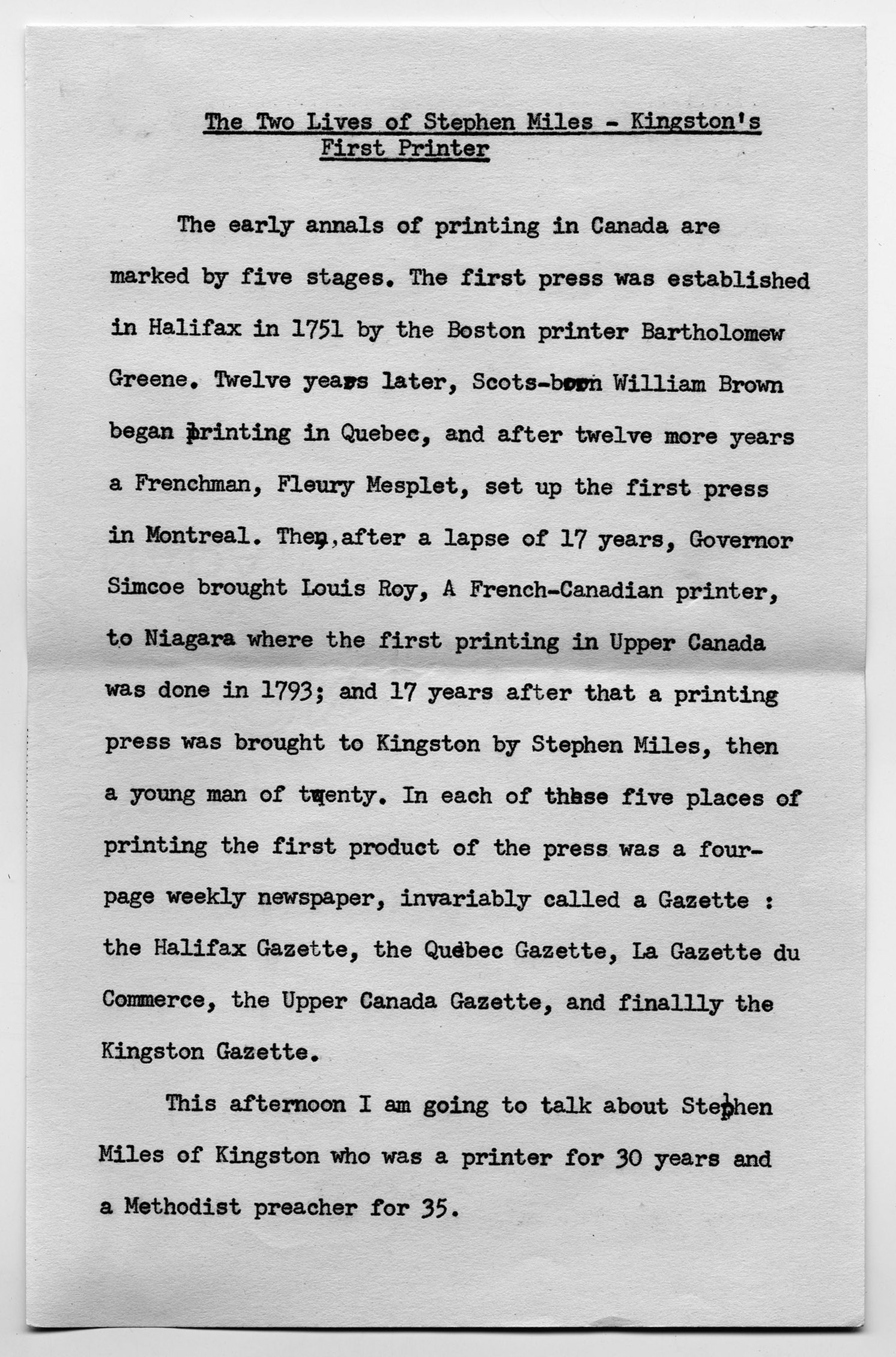 influence the published work itself, and as such his shorter essays have a decidedly biographical tone. In an article entitled “The Two Lives of Stephen Miles – Kingston’s First Printer,” Gundy follows the publishing career of Stephen Miles (1789-1822) and describes how Miles’ four-page newspaper, the Kingston Gazette, rose to prominence during the War of 1812-14 as the only newspaper in Upper Canada to continue publication during the war years. From 1812 to 1815, Miles balanced his publishing responsibilities with his “fierce loyalty” to the British Empire. His participation in the local militia caused him to write and publish articles based on first-hand experience, although interest in the articles was limited by the fact that most other Kingstonians had also witnessed these events. In Gundy’s exploration of this period of Miles’s life, as with many of his other articles, Gundy writes about the comical minutiae of the publisher’s life with the same verve that he affords to more “historically important” events. For example, Gundy humorously suggests that Miles may have been involved in a library for 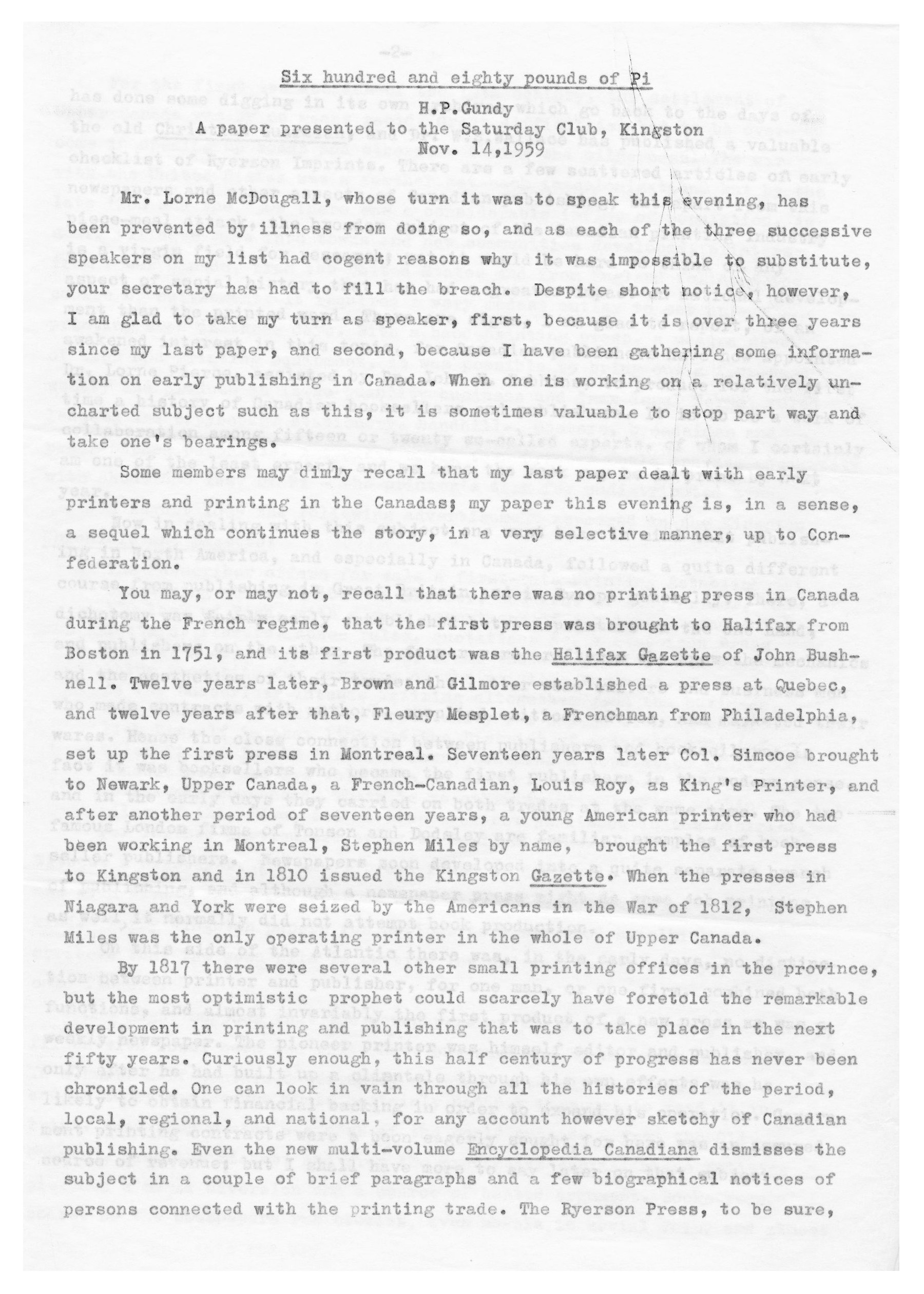 the Kingston Militia guard house, when he quotes an advertisement from the Kingston Gazette: “Missing – From the Guard Room – 1 vol. of Shakespeare’s plays, 2 do. of Mabor’s Voyages; 3rd & 4th vols. Bound in one of Modern Poets. The owner requests whoever may be in possession of the above to leave them with the Editor.”

Gundy’s enthusiasm for publishing history often spilled over into his personal life, and he was fond of sharing his discoveries with his friends and family. On one such occasion, Gundy presented a paper entitled “Six Hundred and Eighty Pounds of Pi,” (a reference to the amount of type a printer was said to need in the early nineteenth century) to the Saturday Club, a group of Kingston intellectuals that held regular discussions. Gundy’s paper revolved around the 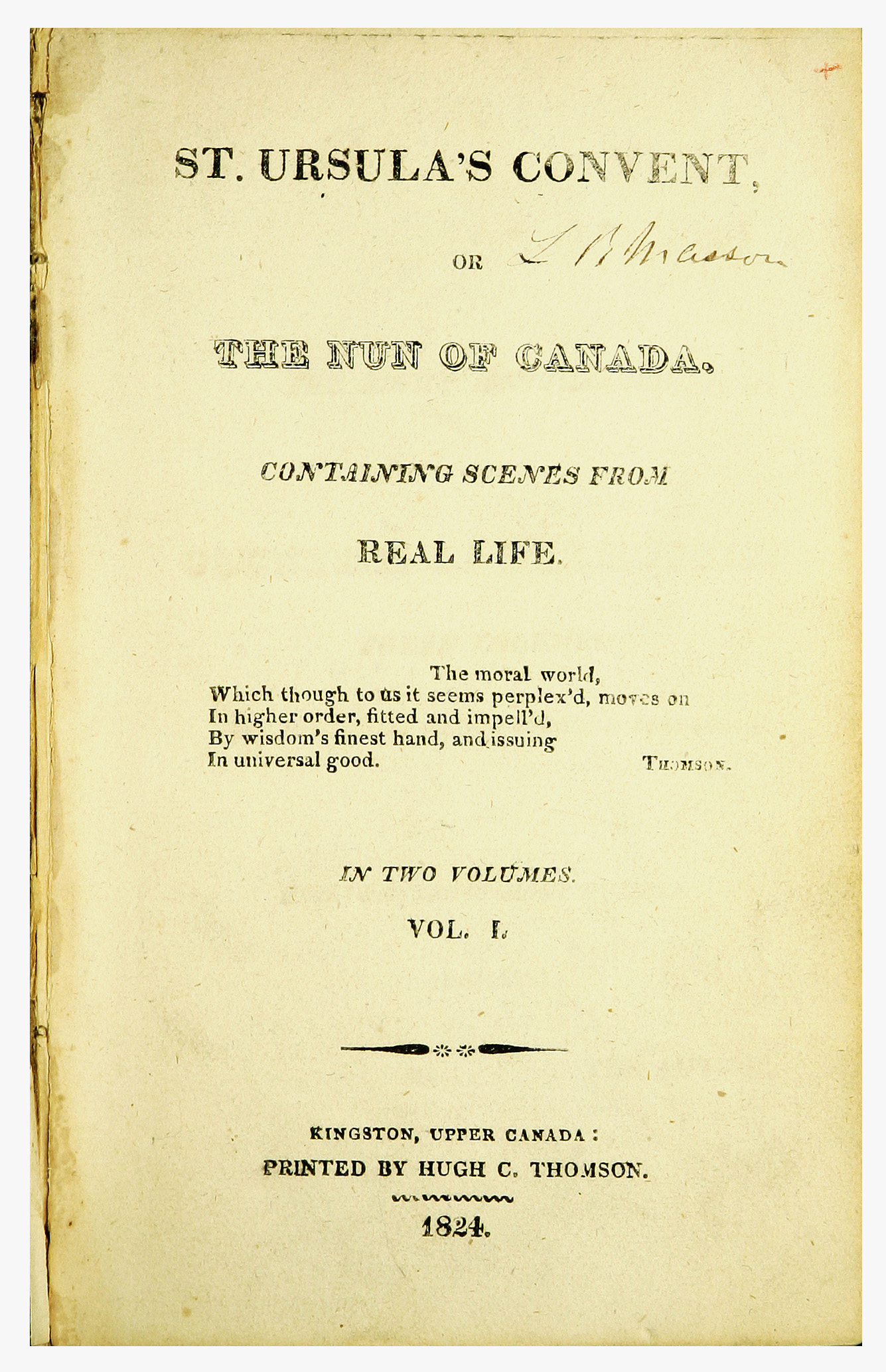 practice for printers, particularly newspaper printers, to also act as publishers in Canada in the nineteenth century. He describes how England’s strict copyright and printing regulations and the prevalence of cheap American prints made dedicated publishing businesses in Canada unviable, and caused many Canadians to publish their work abroad. One notable exception to this rule, Gundy pointed out, was the publication of Julia Catherine Beckwith Hart’s pseudo-gothic romance, St. Ursula’s Convent, or, The Nun of Canada, which was issued in 1824 by Kingston’s Hugh C. Thomson. Although it was published anonymously and was out of print from 1824 to 1978, Gundy identified St. Ursula’s Convent as the first published book written by a native Canadian and helped to draw attention to this previously lost piece of Canadian history. To date, fewer than ten copies 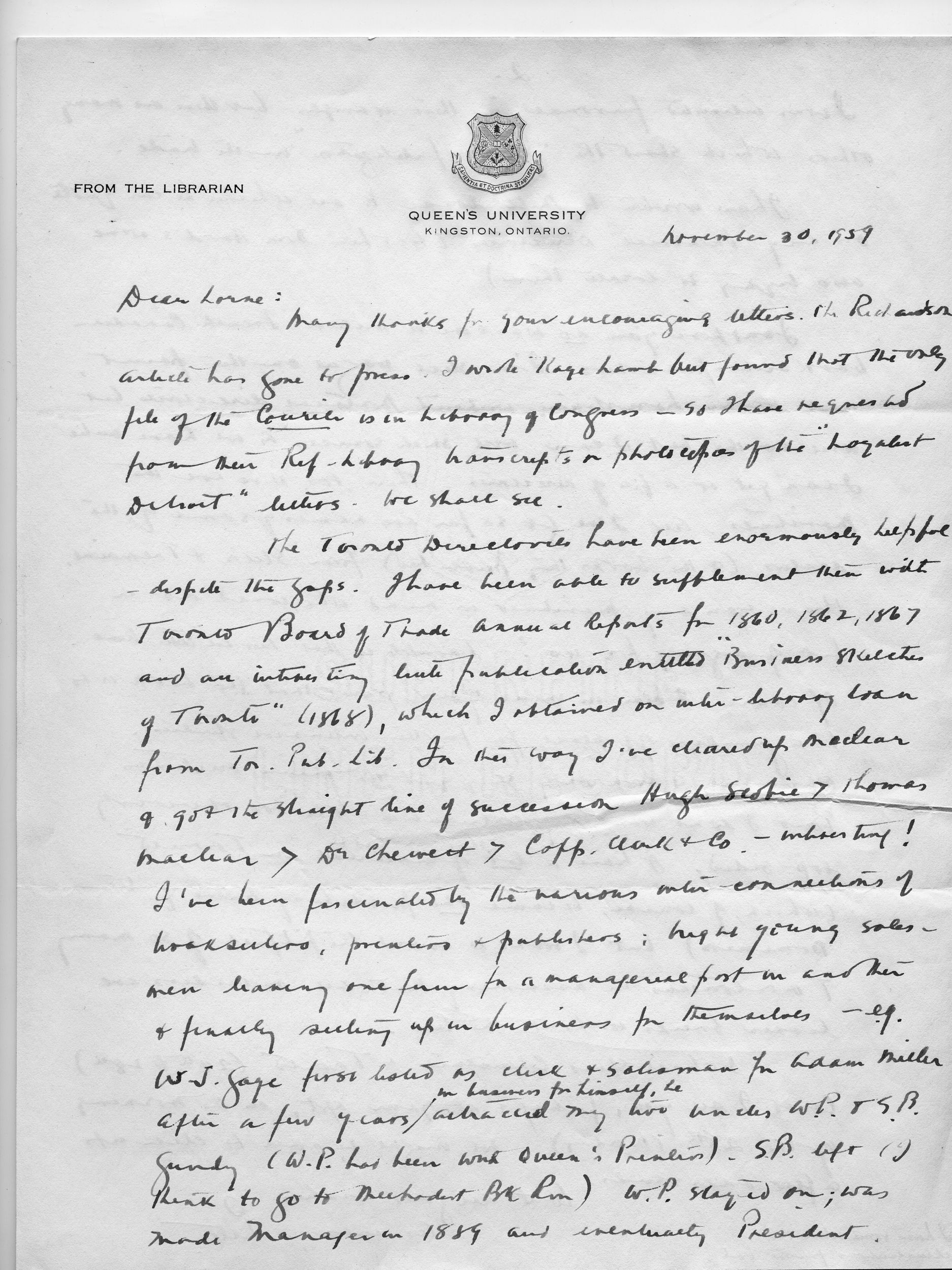 of the 1824 edition of Beckwith’s novel are known to exist. Beckwith scholars believe that a copy was placed in the foundation of the Kingston Penitentiary by Thomson, whose political maneuverings resulted in legislation that led to the jail’s construction.

Beyond his involvement with Canadian publishing history, Gundy was an active historian and Canadianist throughout his life. His close friendship with Lorne and Edith Pierce was an important factor in their decision to donate their extensive collection of Canadian literary artifacts to Queen’s University. Gundy’s last major project was collecting, transcribing, and editing a book of Bliss Carman’s correspondence.