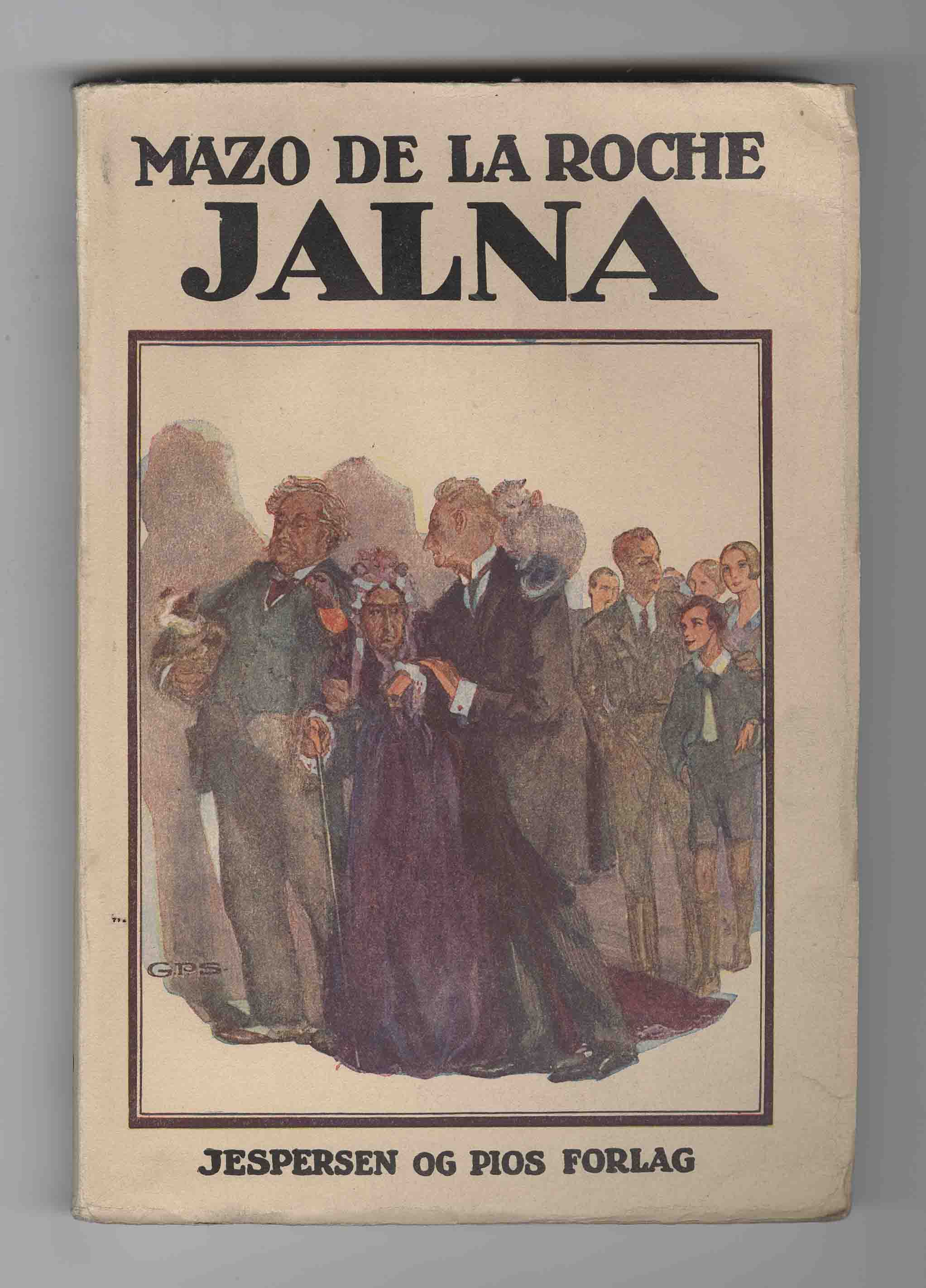 With more than 93 million copies of close to three hundred discrete English and foreign editions of the Jalna books sold over the course of the twentieth century, Mazo de la Roche (1879-1961) ranks among Canada’s best-selling authors to date. 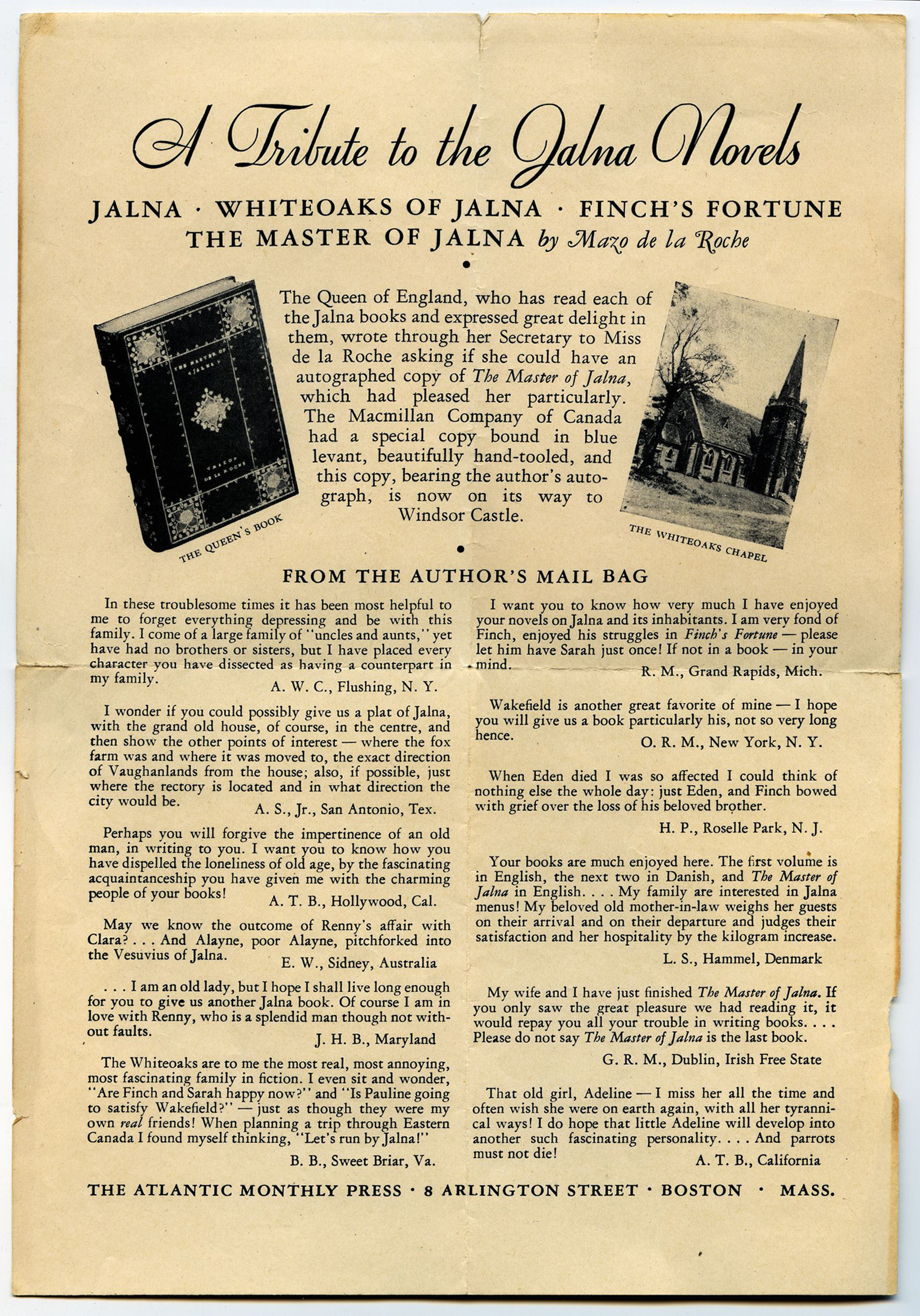 William Arthur Deacon, Dorothy Livesay, and Raymond Knister were among her admirers, as were members of the British royal family, including Queen Mary, consort of George V, who requested an autographed copy of The Master of Jalna. Despite her own inability to attend the production, the audience for the opening of “Whiteoaks” at Toronto’s Royal Alexandra theatre in 1938 included author Morley Callaghan, who was, at the time, arguably at the peak of his own career. Other events held in her honour attracted leading politicians and such literary personalities as Bliss Carman and Charles G.D. Roberts. A further testament to the success and respect de la Roche commanded appears in letters she wrote to her adopted children in the 1930s, 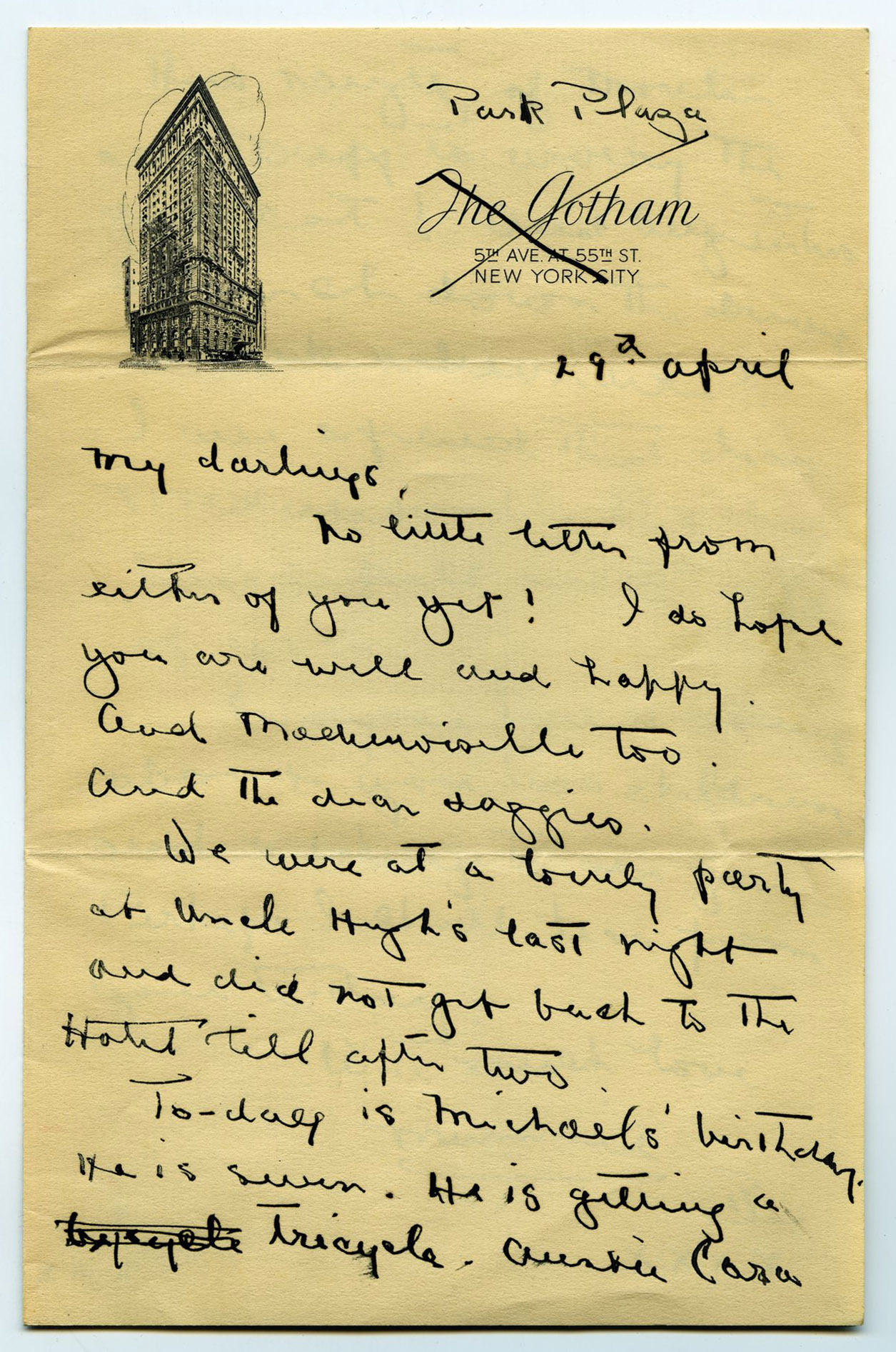 wherein she refers to Hugh Eayrs as “Uncle Hugh,” and to Edward Weeks, Atlantic Monthly editor, as “Uncle Ted,” revealing the familiar ground on which she stood with these giants of the publishing world.

Despite a rapid rise to prominence in the late 1920s, de la Roche spent the first two and a half decades of her writing life in relative obscurity. Her first story was published in 1902, and in the years that followed she enjoyed consistent if not prolific publication in the periodical press. She also received a string of rejections and had to wait twenty years before her first book, a collection of stories titled Explorers of the Dawn, was published by Knopf (New York) and Cassell (London). A minor and little known writer during these years, de la Roche communicated regularly with Ellery Sedgwick, editor at the Atlantic Monthly when the magazine first published her stories in 1915, and with Hugh Eayrs, as Macmillan issued her first two novels: Possession (1923) and Delight (1926). Indeed, she fostered relationships that were both professional and personal with these men, turning to them for advice and 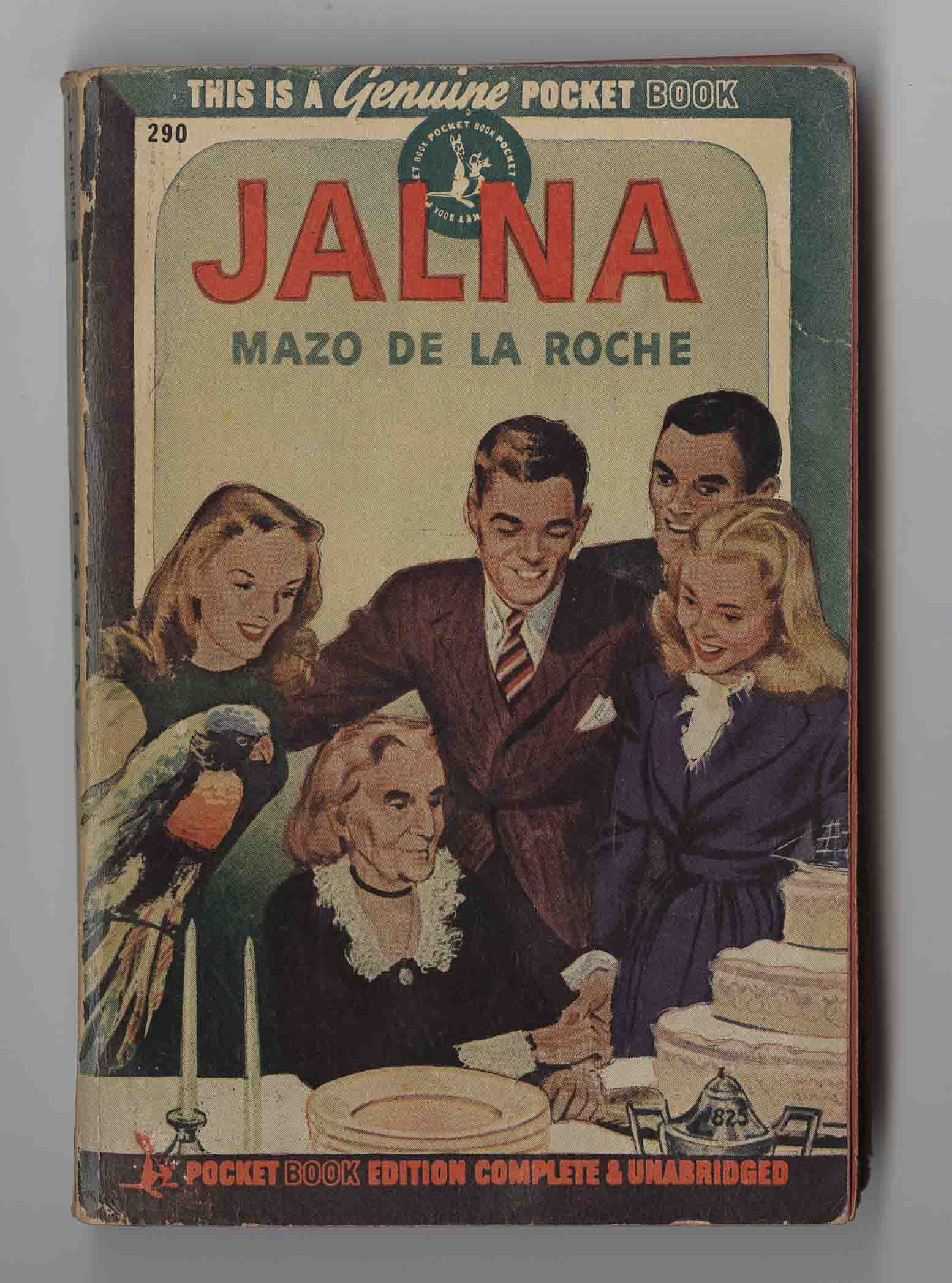 encouragement as she continued to hone her craft.

Jalna, a novel some two years in the making, brought to de la Roche the success for which she had been striving; it surpassed 1,117 other unpublished novels to win the inaugural contest sponsored jointly by the Atlantic Monthly and Little, Brown of Boston. The prize, officially announced on 11 April 1927, was estimated to be $50,000, divided into a $10,000 lump sum payment, serial rights for the Atlantic Monthly’s publication of the novel (from April through October of that year), royalties for the book publication (guaranteed as part of the prize), and rights to any theatrical and cinematic adaptations that might ensue. The win garnered de la Roche considerable attention, as evident in an unidentified news clipping in the de la Roche 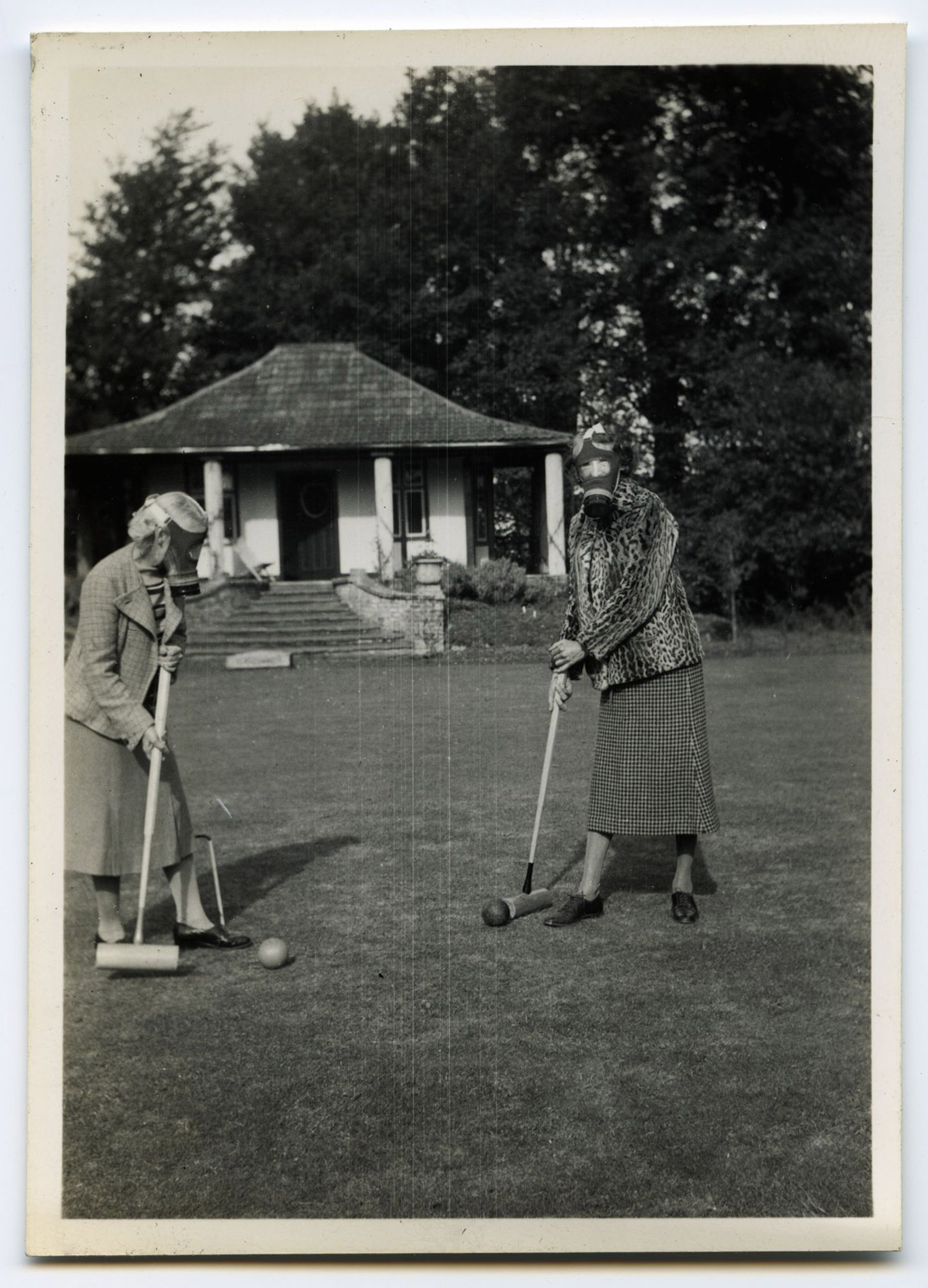 archives at Queen’s University, which announced, with more enthusiasm than accuracy, that she was “the first Canadian in many years to carry off a big American prize” (Martha Ostenso had won a major U.S. book prize two years earlier for Wild Geese). De la Roche skyrocketed to international fame before Jalna was even published as a book, and she continued enjoying critical acclaim for close to ten years afterwards, with her earning potential granting her considerable influence in her relationships with publishers long after critics abandoned their hopes that she would produce the great Canadian novel.

Givner, Joan. “‘Letters to the Editor’: The Correspondence of Mazo de la Roche and Edward Weeks.” Library Chronicle of the University of Texas at Austin 40 (1987): 66-87.